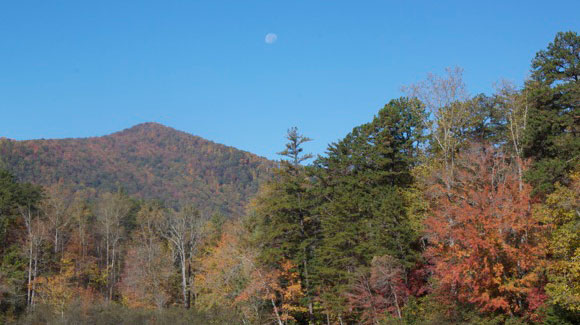 A couple weeks ago mudhunny and I spent the weekend camping and riding at Bent Creek in Pisgah National Forest just outside Asheville, NC and we had a blast! Although we had ridden other Pisgah trails like Dupont State Forest and Thrift Cove, neither of us had ever ridden Bent Creek and we were stoked to check it out with our friends Amy and Rob from Decatur and Sean and Katie from Greensboro.

The 30-mile mountain bike trail network within the Bent Creek Experimental Forest features trails ranging from mellow, wide paths to fast, swoopy singletrack. In general Pisgah has a reputation for techy, gnarly trails but the Bent Creek trails are relatively root- and rock-free and typically follow ancient roadbeds carved into the sides of the surrounding mountains. The upshot: scenic, enjoyable climbs and fast, flowy, no-brake descents. All the trails are well marked and there are maps available at most of the trailheads.

The weather was perfect in mid-October – blue skies and warm temperatures during the day with clear, brisk nights. October is “leaf season” in western North Carolina and we got quite a show as you can see from the pics. Fortunately all the leaves were still on the trees and not on the trail which meant fast conditions. 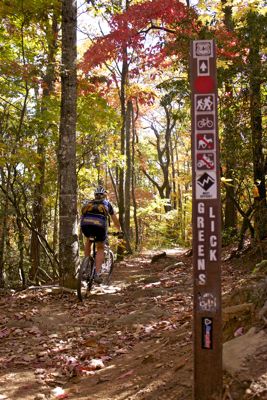 All the trailheads within Bent Creek were packed on Saturday and Sunday with mountain bikers from all over. Perhaps the most popular trail, Green’s Lick, is listed at 2.2 miles long and is one of the fastest descents you’ll find in Pisgah. Green’s Lick isn’t the steepest trail in Pisgah by a long shot but it is one of the smoothest, allowing mountain bikers to really open up on the downhill. Our run took about 8 minutes (including a minute or two recovering from a minor crash) and by the end of the trail my ears were ringing from the howl of the wind rushing by. Check your tire pressure before you head down this one – we saw two separate groups trailside with flats on the way down!

On Saturday I went out for a solo night ride which normally isn’t a safe idea but the trails are all so easy to follow I had to give it a shot. Without a map I fumbled my way around an impromptu circuit with the Pine Tree and Explorer loops. After a few miles the trail dumped me at a forest road which I thought I recognized from earlier in the day so I followed it for miles, hoping to link up with more singletrack. I eventually gave up after climbing for more than half an hour and descended down the gravel road from Ledford Gap. Still, it was one of the best night rides I’ve been on in a while with black mountains silhouetted against deep purple skies.

The campground at Bent Creek lies within the Lake Powhatan Recreation Area and offers nearly 100 campsites. On this October weekend the place was full but you wouldn’t have known it – the campsites are spaced out nicely with plenty of privacy and room to stretch out. There are even hot showers and flush toilets, not to mention a sand beach down at the lake.

If you end up staying at Lake Powhatan and somehow get tired of riding the Bent Creek trails, you can also ride up FS road 479 to the Blue Ridge Parkway and link up to other Pisgah trails within the Mills River area.

Pisgah National Forest is legendary among mountain bikers and Bent Creek is a great spot to touch down and explore the trails. Get Bent this fall!

Trails
The Pisgah Project Fundraiser: Chance to win $9,000 REEB SQWEEB...
Trails
Searching for Beginner Trails in Brevard to Avoid East Coast...
Trails
Hundreds of Miles of the Best MTB Trails in Western...
Community
2nd Annual Get in Gear Fest Coming to Asheville in...

Gear
Never Underestimate the Power of a Good Zip-tie
Gear
Mountain Bike Tire Repair Tips: From Emergency to Semi-Permanent
Gear
These MTB Deals are Fire, including 40% off Patagonia Dirt...
Gear
The Maxxis Minion DHF Tire is Still the One to...
Subscribe
Login
Please login to comment
7 Comments
Most Voted
Newest Oldest
Inline Feedbacks
View all comments

This has been on my to-do list for far too long, but looks like I won’t be up there until next spring at the earliest…

Great video, I loved the crash into the underbrush 😉 Those berms looked like a blast too! Reminds me of Tsali and the Ridgeline trail at Dupont.

Definately on my to do list as well. Great to know you can camp there.

What is the soundtrack you’re playing with the video? Great job on the clips. Makes me want to go ride right now – can’t wait for it to stop raining!

The song in the video is “Don’t play no game that I can’t win” by the Beastie Boys. It’s off their latest album.

Title says it all. Thanks!

Considering how much trouble that stick in the spokes gave you, should have taken it back for firewood. Have lots of trails like that up my way, some not even listed as trails, just miles and miles of old logging roads.

I live 10 minutes from bent creek