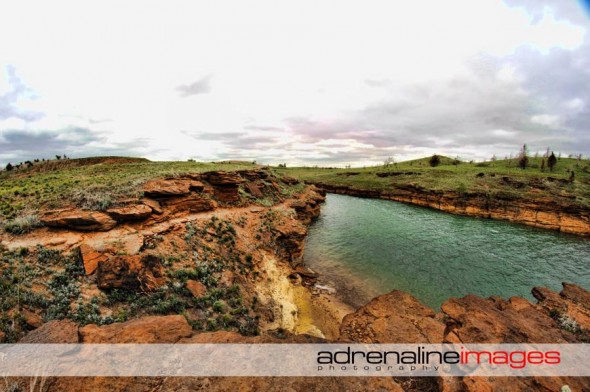 Driving through Kansas on my way to Colorado I’ve often thought Kansas must be the worst place on the planet for mountain biking. At 75 mph the state seems flat, featureless, and unending which is why I had to see if it was possible to have a good time on a bike in Kansas.

Two years ago I stopped off in Lawrence, KS on my way to Colorado and scoped out the mountain bike trails at Clinton State Park. I didn’t get my bike off the car (which I later regretted) but I walked some of the trail and was surprised to find tree-covered and rocky, rooty singletrack along the shores of the reservoir. But Lawrence isn’t far from the Missouri border to the east so I decided this trail probably wasn’t representative of the rest of the state. 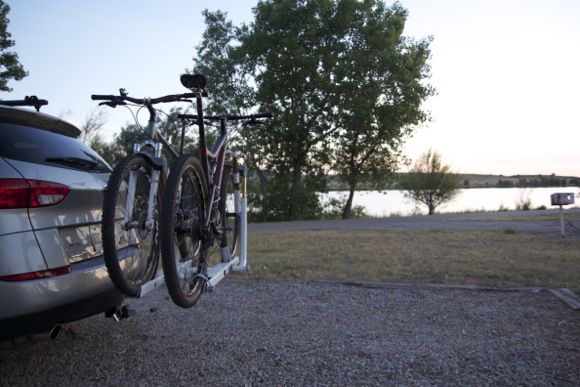 So on Friday evening after driving 16 hours from Georgia I was ready to pitch my tent for the night and stopped off at Wilson State Park near Russell, KS nearly smack dab in the middle of the state (and the middle of the country for that matter). Dusk was quickly approaching but I had been looking forward to stretching my legs on the trails all day. The Switchgrass camping area is located right at the mountain bike trailhead and after quickly throwing my tent up, I strapped a light to my bike and hit the trails.

My plan was to ride for about an hour or so and after consulting the map I realized that wouldn’t be enough time to explore all 22 miles of singletrack. There are three main loops at Switchgrass, each about 6-9 miles long, starting with the Golden Belt Loop. At this point the sunset to the west was amazing and I had a hard time keeping my eyes on the trail. 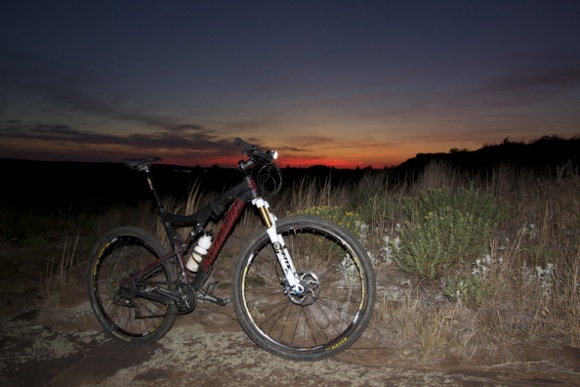 The first part of the Golden Belt Loop featured some short rocky sections that felt like Palmer Park in Colorado Springs. I really wanted to ride everything cleanly but with the fading light and my tired legs I was dabbing all over the place. I had found a challenging trail in Kansas! 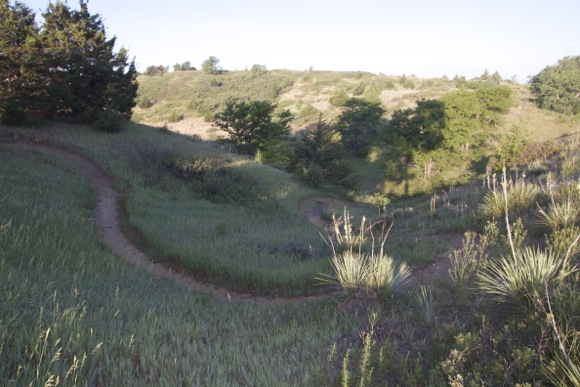 After a mile or two I crossed one of the campground roads and consulted the map again: the Marina Loop was up ahead. I decided to ride the Marina Loop then head back to the campground – no need to push myself too hard or worse, suffer a crash or mechanical in the dark by myself. The trail was well marked with signs and even printed maps at many intersections and I was starting to get into a good rhythm.

Along the Marina Loop I could see the lights from the boats docked across the lake which kept me oriented despite the sinuous, looping trail layout. In the dark this place reminded me of the “secret trails” back home that seem to double back on themselves without ever crossing. I was tired but figured it couldn’t be much farther since I had been riding for over an hour.

I kept chugging along but started getting a sinking feeling as the lights from the campground and marina faded away. I was now surrounded by complete darkness except for the moon and stars in the sky. The hills around me were unfamiliar blacksilhouettesand I had no idea which direction I was heading. At this point I started to panic – how would I find my way back to the campground?

Now was the time to stop and take a deep breath. I drank some water and took stock of my situation: I still had plenty of strength left and my bike and light were working fine. It was just a matter of riding the trail out. I plodded on, feeling like I was on my third night lap of a 24 hour race except instead of riding all day I had been driving my car for 16 hours. Man, I just wanted to go to sleep in my tent.

Before long I spotted a trail map and confirmed my suspicions: I was on the wrong trail. Somehow I missed a turn and jumped onto the Hell Creek Loop instead of returning on the other side of the Marina Loop. Unfortunately I was at the farthest point on the farthest loop in the system. It was gonna be a long ride back. However, from the map it appeared the Hell Creek loop would run parallel to a paved road at some point so I made it my goal to use the road as a shortcut.

Easier said than done. There weren’t any cars out this late (it’s Kansas after all) and there were no street lights. I rode for about 15 minutes thinking I had missed my chance when I saw something reflective in the distance: a road sign! I made a b-line off the trail to the road and quickly found myself back at the ranger station near the park entrance. From here I jumped back onto the Golden Belt loop and finished the ride off with part of the EZ loop.

All in all I clocked about 14 miles and – get this – 850 feet of climbing. By the time I returned to the campground everyone was asleep and I was the jerk who was making all kinds of noise zipping and unzipping things, unlocking and locking my car, and inflating my air mattress. 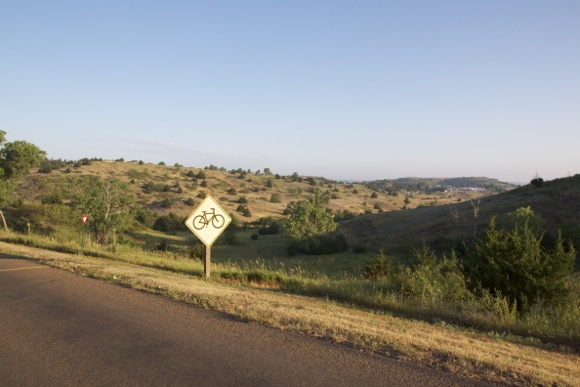 The next morning I walked around and snapped a few photos and just couldn’t believe this place exists in the middle of Kansas. Looking at some of the photos you’d be forgiven for thinking this was northern California or at least eastern Colorado. With a clean, accessible campground, 22 miles of undulating singletrack, and easy access off I-70 Switchgrass is definitely worth the stop. Heck, it might even be worth the drive from Colorado for a weekend trip.

Just last week had someone recommend Wilson State Park. His reaction was the same as yours; WOW sweet single-track in the middle of Kansas. I get through there a lot, will have to give it a ride.

+1 Beautiful area. If you’d ever driven KS with small HP and heavy loads you’d see it as long rolling hills. 🙂 But there’re hills every where. and even in FL there’s dirt (sand) if no real hills. Also if you get as far as Western Ks it starts to have some real elevation so you can start to acclimate, but doesn’t look like that’s you this time.

Got me all worked up and wanting to take a road trip!

Great story about getting lost at night in the land of Oz. I grew up in Salina Kansas and spent a lot of time on Wilson Lake so I know it’s hilly country but didn’t know there is such a well developed trail system there now. It is now on my wish list since I drive right by there twice each year.

Mountain bikers don’t get lost, it’s just a excuse we use to get more riding in. Or in my case I just forget to turn around.

Just rode there today–what a great trail! Some crazy drop offs/exposure on the hell creek trail. Sounds like I did most of the trails you didn’t do and missed most of the ones that you did do (Golden belt, first part of marina). Also, I went the wrong way on most of the trails (except Hell Creek) and it took its toll–the trails are definitely designed to flow in just one direction. But all in all, it was a great ride!!

Lol I guess miracles can happen after all.

Wow–you only do 75 through KS? That’s showing some restraint!

In all seriousness, finding a great trail in an unexpected place is always welcome.

@John Fisch – yes, I went exactly 75 mph in Kansas this time. I got pulled over in Missouri on Friday for doing 68 in a 60 (I don’t think I was going that fast but whatever). It was the weirdest stop ever – the sheriff’s deputy was commenting on my bikes and how expensive they were. Then he asked me how much cash I was carrying in the car, presumably because he thought I was some kind of drug runner or I had stolen the bikes. I got away with a warning – well, not even that – he told me upfront I wasn’t getting a ticket.

Then yesterday I got pulled over here in Colorado outside Winter Park. I was driving uphill and the highway patrolman was coming the opposite direction. Again, I don’t think I was doing even 10 mph over the limit but he pulled a U-turn and turned on the reds and blues. Said I was 13 over the limit and took almost 10 minutes looking over my license and registration in his cruiser. Finally came back with a warning and said the ticket would’ve been $170.

I won’t be pushing my luck anymore during this trip. Will just slow down and enjoy the scenery. 🙂

Sounds like a blessed trip so far. May you enjoy as much success on the trails!

@trek7k Don’t believe I’ve had a warning in 18 years, tickets sure.

@treck7k, how lucky you were to get a warning from the CSP, they don’t do that often.

Did you stop in the Winter Park area for a ride or were you just passing through?

14 miles + 850 ft of climbing right after 16 hours of driving is pretty impressive. bet you slept well.

@Road Warrior, yeah i got a ticket in lousiana (now my least favorite state) for doing 8 over and he even knew i was military.