Durango has an incredible selection of mountain bike trails accessible from town, making it difficult to decide where to begin. It’s no wonder Durango’s Fort Lewis college consistently fields one of the best collegiate mountain bike teams in the country with world-renowned trails like Telegraph / Horse Gulch literally in their backyard. Over the summer I spent a week in Durango, CO and got a chance to check a couple new trails off my wishlist while I was there. 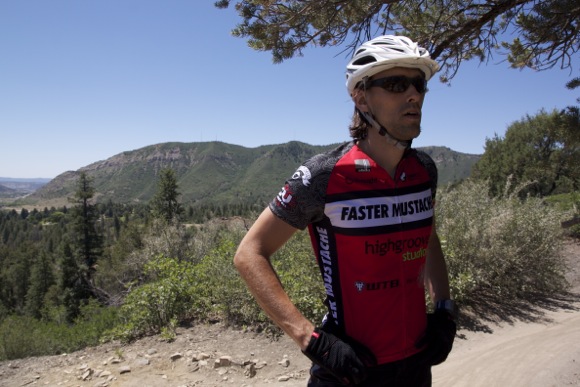 Ned Overend is a mountain biking legend and he just so happens to call Durango home. A local trail system is named in his honor and it’s conveniently located just across the river from downtown.

It was a hot day with temperatures in the 90s when mudhunny and I hit the Overend trails. We planned out a loop that would take us around the park, starting with Crestview and Hidden Valley trails. The riding was dusty and exposed with a few sandy spots down low but as we ascended the tree cover offered welcome relief. The first descent we hit was down a trail called Star Wars which was surprisingly steep but flowed really well.

From Star Wars we could see a steep ridgeline trail above us that we assumed had to be some sort of renegade trail–no one would build such a steep, exposed line in a public park. Consulting our map, however, we realized this was the Hogback trail, a double black diamond run–and with good reason. 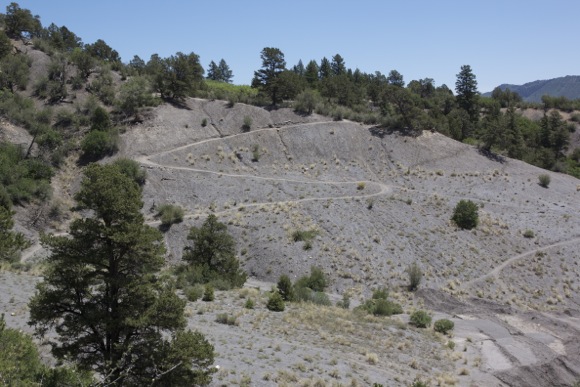 We decided to hit Perin’s Gulch and Hogsfoot instead and were struck by the sheer speed of these trails. Sure, there were a few rocks thrown in for good measure but for the most part, it was rip and ride!

Before leaving mudhunny made a point of riding up, then descending Ned’s Hill, and opened it up like a pro! Although Overend Park only has about 7 miles of singletrack, we were spent after such a hot day in the sun.

Having ridden Telegraph, Overend, and the Dry Fork trails, I wanted to get a feel for a lesser known trail system in Durango so I chose the Log Chutes Trail System near the Colorado Trail terminus at Junction Creek. Log Chutes wasn’t listed in the Singletracks database which is always exciting–fresh dirt with no expectations!

Driving to the Log Chutes trailhead is a bit of a haul even though the trail system isn’t far outside of town. I had the trailhead parking lot to myself and set off solo with map in hand to explore.

Initially the trails were well marked, though calling them “trails” is generous–I would say most of what I found was doubletrack or even fire road. At the first hint of singletrack, I took a right turn and descended for about half a mile before stopping to consult my map. Apparently the trail I was on wasn’t an official trail and I was now in what appeared to be a residential development that never got off the ground. I looped around the abandoned, grass-covered roadbed and ascended the singletrack back into the trail system.

I followed Log Chute Canyon Trail #1 around to the edge of the mountain and caught glimpses of the Animas Valley thousands of feet below. I wanted to stick to the edge of the trail system to get the most bang for my buck and eventually found myself walking up a hike-a-bike section that seemed to go on forever. Like the other trails I had ridden in the Log Chutes Trail System, even this climb was doubletrack. 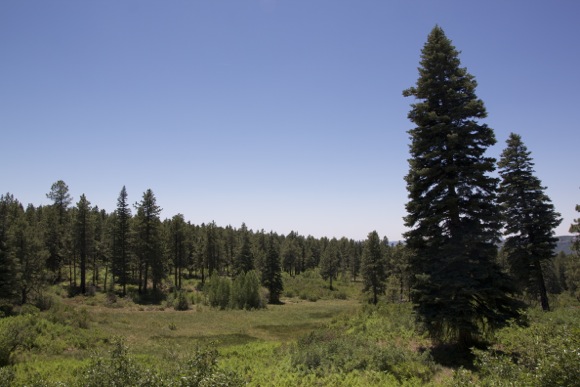 I eventually topped out at the High Pine Trail and hung a left to continue my sweeping loop. This meant riding down a gravel road that is open to cars for a bit but the singletrack that was to come made it all worthwhile.

According to my map, Log Chutes Trail #1 was on the right side of the road and sure enough after a mile or two, there it was. Ducking into the singletrack I immediately found multiple lines through the woods, including some with aggressive ramps and wooden structures–not what I’d expected to find in a National Forest. Later I learned from the local mountain bike club that they were working with park rangers to clean up and re-route portions of this particular trail. 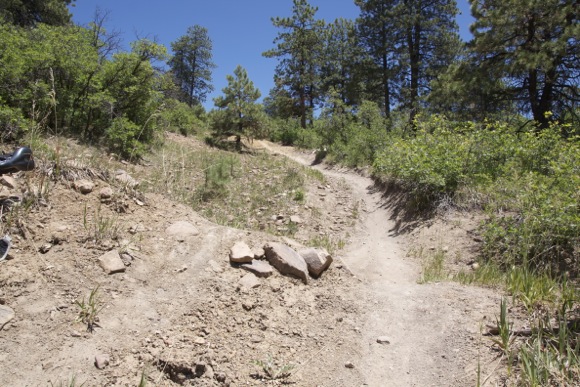 The second half of Log Chutes Trail #1 was a blur–it was a fast, steep descent down to the Junction Creek Campground. Here the trail comes within steps of the Colorado Trail and offers some of the best (official) singletrack I was able to find.

As you would expect, our time in Durango was great and we barely scratched the singletrack surface. We also got to ride Phil’s World in nearby Cortez for the first time, but that’s another story for another day.

What’s your favorite thing about the mountain biking in Durango?

My favorite thing about biking in Durango? Pizza at Home Slice afterwards! Glad to see this post as we often stay at Junction Creek and have wondered about the Log Chute area. My favorite is still the Sale Barn section of the Telegraph Trails…Durango is just such a great town; I guess that’s why we find ourselves heading over the pass to get there every spring.

I have a MTB guidebook for Colorado which has all of two Durango rides listed: Hermosa Creek and Log Chutes. Even taking into account the good points, it sounds like Log Chutes is far from the top two rides in the area, at least for me–the pics sure don’t put it on the top of my wish list–it’d probably be a great ride if it was close to home, but it sounds like I don’t want to put it on my Durango itinerary. Thanks for a straightforward review.

I look forward to your Phil’s World entry–I have ridden, and love, that trail system.

Yes, Log Chutes deserves a pass for most riders.

I still haven’t ridden any parts of Hermosa Creek but the map I have basically tries to talk people out of it. From what I understand parts of the trail are very remote and riders tend to get in trouble out there because they underestimate the difficulty and length.

Rode there last fall. Except for a few renegade trails on the Junction Creek side most of the Chutes area is a waste of time — nothing but old logging roads. Personally, I think Hermosa is well worth the ride and I encourage you to go check it out. I posted a review on the trail. I would love to ride CT – Kennebec Pass to Junction Creek but couldn’t work out a shuttle for it when we were there, plus the weather was dicey at the time and you don’t want to be caught out there in bad weather. Also, think about riding Molas Pass to Engineer Mountain. A bit of a grunt in some places but I think it deserves considering, especially if you enjoy epic rides.

Am considering hooking up with an outfitter to ride the last four sections of the CT into D-town. They’ve got a 5 day trip that covers sections 25 – 28 with a warmup day on Hermosa. It’s expensive, but it may be worth it to have someone else do all the logistics so I can just ride/camp/eat.

I’ve ridden part of the Molas Pass to Engineer route (we continued on the CO trail to Bolam Pass) and it’s really awesome, definitely worthwhile. Dropping down to Engineer Mtn. looks like it’s best done as a shuttle. 🙂

We have a group vacation being planned for Durango for later this summer! I hope I can come up with the cash to join in on it. It sounds like a bunch of great riding!

This reminds me of a trip I made to an LBS many years ago. I was picking up some parts and at the time was considering buying Ned Overend’s book. Ned happened to be there shooting video for a Specialized ad. The salesman said “Buy Ned’s book and I bet he will sign it.” So I picked up the book and the salesmen introduced me to Ned. He smiles and puts an inscription in the front cover “Come to Durango and we can take a ride.” I look at him, smile, and say “Great! I will look you up the next time I’m down there.” His eyes get big — he probably was having second thoughts about that wording. I thought it was funny that he might fear some random dude showing up on his doorstep. I guess I should have given him a call when I finally went down there last fall. 🙂