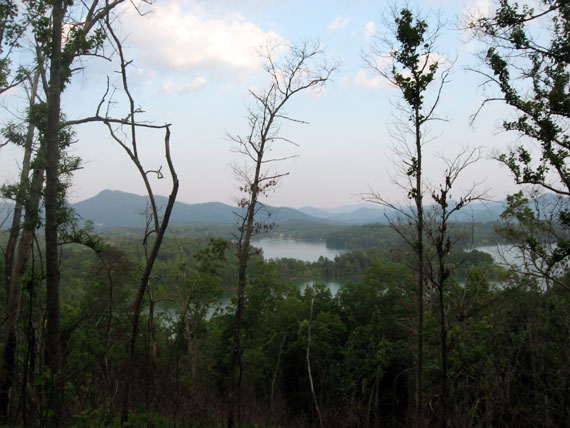 A few weeks ago the opportunity to hit the road and travel to the Jackrabbit Trail System presented itself by way of an invitation to my wife from her cousin. Whenever my wife asks if I want to travel to a new trail to go riding, I’m sure to jump on it! In fact, I was very intrigued by what I had heard about the Jackrabbit trails from a lot riders I know. The trail listing here on Singletracks didn’t seem to have much information and there were no pictures or video to give a definite indicator of what the singletrack was really like. Time for a little adventure!

All About the Trail

If I had to describe the Jackrabbit singletrack in three words, I would call it “fast, flowy hardpack.” Leave the suspension at home folks… this is a hardtail paradise! Yep, the trails here are fast and flowy, artfully built into the hills on a peninsula in Lake Chatuge, just south of Hayesville, North Carolina. The singletrack climbs and dips, twisting through the trees and around the hillsides, flying up and over small whoop-te-dos at random. While there are several climbs and descents, it never seems like you’re climbing for very long. This is possible thanks to the uncommonly flat terrain for North Carolina and the fact that the trails are thoughtfully laid out to encourage you to maintain momentum throughout the course of the trail. 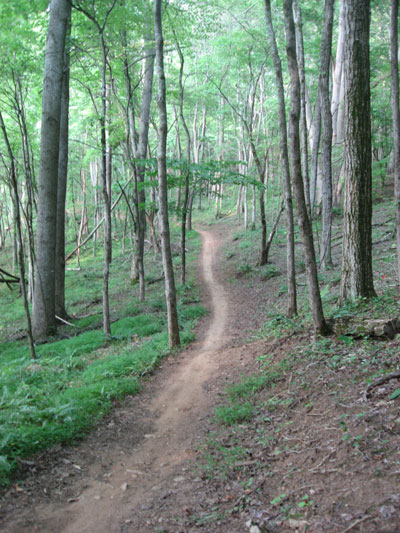 The trail system is designed around a 3.1 mile central loop that is very beginner friendly, but still enjoyable by just about anyone. Situated around the outside of the main loop (and one in the interior), there are several trails of varying style and difficulty. One trail features tons of whoops and jumps, another focuses on fluid turns and flow, one is tighter and limits your speed more, and another features real climbs with some rocks and bridges to keep things interesting. 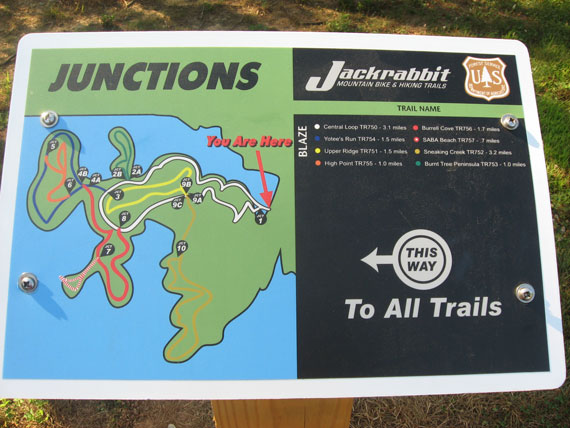 I’ve ridden over 138 trails all over the country and I have to honestly say that the trail signage at Jackrabbit is the best I have ever seen! Every single intersection is marked with one of these signs, which include a giant, red “You Are Here” arrow. In fact, at one point I reached an intersection where several trails joined up, and I could see four of these signs sitting within a few feet of each other at each prominent corner of the junction. Even if you are bad with maps and directions, getting lost at Jackrabbit is out of the question!

The Mastermind Behind the Network

As we were casually riding along on a Wednesday evening, we crossed paths with many locals who offered an enthusiastic wave and a “hello.” At one intersection, we met some friendly riders who shared some trail advice and wanted to help point us in the right direction. Due to their familiarity with the trails and their construction, I asked “Did you guys help build these trails?” The older man responded by pointing at his riding partner and saying, “She’s the mastermind behind this place!” Her name is Joanna. She is a small, unassuming retirement-age woman who obviously loves to ride her mountain bike. As she began to talk about why they had designed and built the trails the way they had, I could see in her face a passion for mountain biking and her beloved trail system!

Apparently, Joanna and her partner used to take groups of kids mountain biking as a part of an after school-type program. As they led these trips, they eventually grew tired of seeing the kids throw their mountain bikes down beside the trail and refuse to go on due to the difficulty. After all, they live in North Carolina where many of the trails are anything but beginner-friendly! That is where the inspiration for Jackrabbit was born. They wanted to build a trail system that would be fun and easily accessible for beginners such as kids to ride, and yet they wanted to build something that would be entertaining for much more seasoned riders as well.

To hear Joanna tell the story, the trails have been a success! Now when they take kids out to ride mountain bikes, they’re all grins from ear to ear and can’t wait to go riding again! Not to mention all of the other riders who show up these days. Where else can you find a nearly full parking long on a Wednesday evening?

Goo is your guide to North Georgia singletrack. He’s also a member of the Airborne MTB Flight Crew and blogs at GregRidesTrails.com. He’s even hosting a MTB photo contest this month, pop over to see how you can win $100!

Gear
You Have $5,000 to Spend on a Mountain Bike. Which...
Gear
Never Underestimate the Power of a Good Zip-tie
Gear
The Shimano GRX Drivetrain Brings Familiar Mountain Bike Tech to...
Progression
Sizing Up or Down Plus Handlebar Widths and Crankarm Lengths:...
Subscribe
Login
Please login to comment
7 Comments
Most Voted
Newest Oldest
Inline Feedbacks
View all comments

Your description of this trail sounds like Hans Rey’s textbook definition of “flow country.” I love the idea of a trail anyone can ride and still have fun. Are the loops directional to allow more experienced riders to go fast without worrying about collisions?

Yeah, the trails were great!

I don’t remember seeing any directional signs, and I did meet some head-on traffic at times. It seemed like a couple of the loops flowed better in direction than the other though.

Jackrabbit is definitely a fun system. Non-directional. We found loops we liked and repeated in reverse when we found a better descent one way versus the other. It is a trail system where after putting in 16mi I still wanted to stay and do more laps. Definitely on my list for a repeat visit. IIRC it was contract built by one of the IMBA trail builders for the SE. There is definitely good use of natural terrain and features like down trees.

The photo contest was initially supposed to end tonight, but I decided to extend it through next Sunday, and give away 3 runner-up prizes as well. Let’s see those photos!

[…] Jackrabbit after seeing a review of it on the Greg Rides Trails blog, who describes the ride as “fast, flowy hardpack.” After riding there, Timm decided it was the perfect place to teach his son to love the […]

The wife and I rode these trails a couple of weeks ago during a week long mtb and rafting vacation to the Ocoee area. After riding a different trail (or trail system) every day, Jackrabbit was hands down the favorite!!!! These trails have a little bit of everything all in one location.
Fortunately we didnt get to Jackrabbit until our last full day of riding, if we had gone there first we may not have biked anywhere else!!

Side note : Ride the tree (at least try) and take the candy cane trail (its worth it!)

The wife & rode the trails on Thurs, Sept 29 for the first time. I’m a intermediate/advanced rider, she has only been biking 5 times on beginner trails here in Florida & we both had a great time. The trails are very well maintained & clearly marked. Some hills may challenge new riders, but nothing crazy. The trails have great flow & are a blast to fly through. This is a beautiful area with a nice lake (beware of the wet clay!). Kudos & thanks to S.A.B.A. for there work! I definitely recommend these trails!