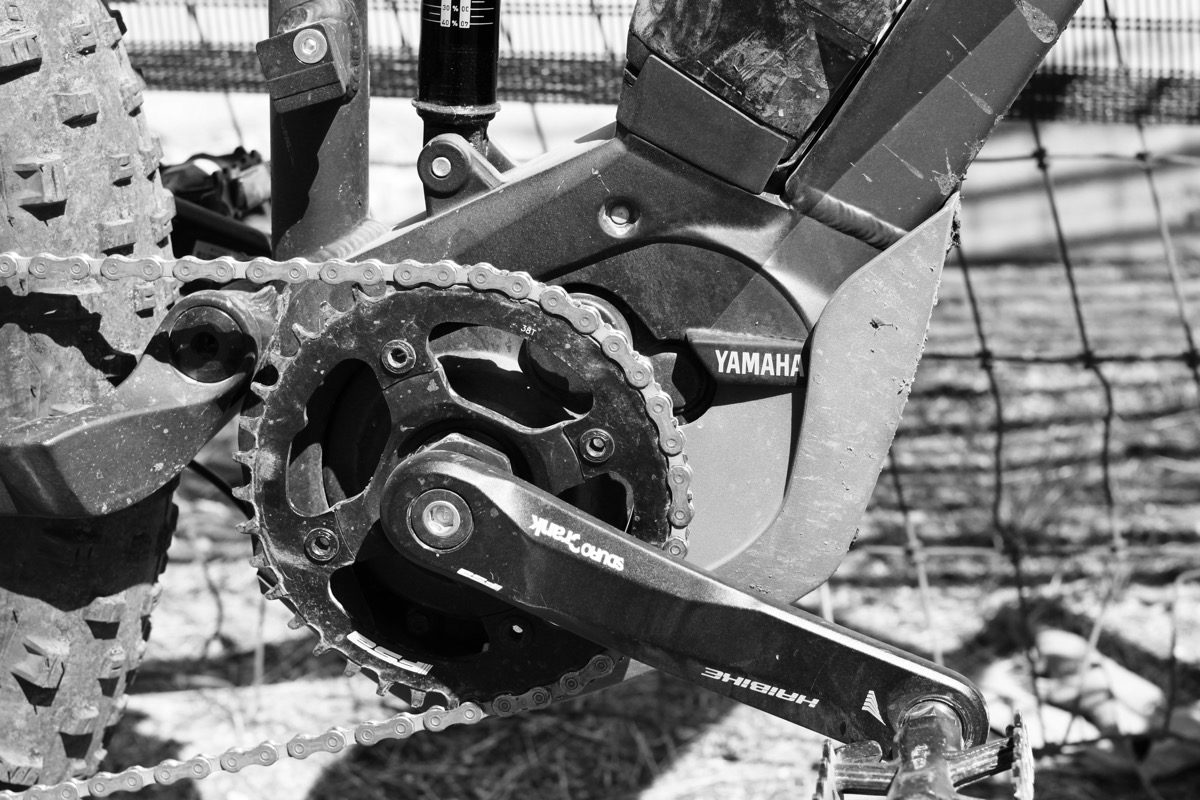 As we pointed out recently, mountain bikers’ opinions on electric bikes are shifting. As these bikes become more widely available, it’s important for land managers and advocates to consider how increased adoption might affect trails, access, and other trail users. With that in mind, IMBA just updated their e-bike policy.

Let’s break this down. First, Class 1 electric mountain bikes are those that are pedal assisted (no throttle) with a regulator that cuts assistance at 20mph. Further, electric bicycles are classified as those with motors capable of producing less than 750 watts. There are other classes of electric bikes that offer assistance at higher speeds and/or include a throttle (no pedaling required,) but those are not covered in IMBA’s policy.

Next, let’s talk about non-motorized trails. Prior to this update, IMBA was working off their 2015 Motorized/Nonmotorized Recreation Policy Statement which basically says mountain bikers shouldn’t be lumped in with motorized trail users. As an interesting aside, this policy document also states IMBA’s objection to the use of the word “mechanized” when referring to bicycles. Could this be laying the groundwork for a challenge to mountain bikes’ exclusion from Wilderness areas?

Within the USA, there are often overlapping groups of users who are allowed access to individual trails. For example, some trails might be open to hikers only, while others are open to hikers, bikers, and equestrians. Non-motorized trails are those that are closed to motorized vehicles, and this is where electric bikes present both a question and a challenge. Sure, everyone agrees that electric bikes should be allowed on motorized trails just like gas and human powered bikes. But is an electric bike motorized in the same way as a dirt bike?

Back in 2015, IMBA’s policy was that electric bikes should indeed be treated the same as any other motor vehicle.

However, the use of a motor whether internal combustion or electric would require changing the classification to a motorized use. IMBA would support the use of e-Bikes anywhere that we could also support other motorized uses. [2015 policy]

IMBA’s opinion then, like many mountain bikers’, was pretty black and white. But in the intervening 2 years, it seems some land managers have started to indicate a willingness to allow electric bicycles on non-motorized trails, essentially making an exception.

IMBA also makes it clear they will only be supportive of electric bikes on non-motorized trails if there are assurances this access won’t reduce access for traditional mountain bikes. This last bit addresses one of the strongest arguments most mountain bikers have against e-bikes, namely that they will cause us to lose access to existing trails.

While IMBA hasn’t gone so far as to advocate for electric mountain bike access in this policy update, they are showing flexibility in the face of an uncertain and inconsistent regulatory environment. Will this be the last time this policy is updated? Probably not. Everyone, from riders and advocates to regulators and manufacturers are still trying to figure out how this whole electric mountain bike thing is going to work.

They’re designed for anyone with a wallet to pay for one, bottom line. Any designation beyond that is more marketing, and lies.

I have talked with many that have spent much more on there meb’s. How are PEDAL ASSIT bikes harder on trails than than guys gals riding there cycle cross bikes in speed and impact on trails. If you really want to have low impact on trails just put speed limits on trails. Let me ride easier maybe a little faster on the climbs and enjoy the ride with others.
Sincerely…

I can’t believe this topic is even becoming a debate. What is the initial design intent of these electric bikes?Whom are they designed for? what market nich do they fill? The mere existence of this vehicles confuses me let alone a conversation that includes them with the mountain biking world.

They were made so that people can go further on their bicycles. You know so they don’t have to drive a car to the bike trial, for instance.

I have seen what e bikes have done to crowded bicycle paths ( I commute into midtown NYC for work) and I would hate to see a variation of this on the trails.

Actually that’s just an issue with fast bikes on bike paths. As anyone who ride fast knows, once you try it on a popular bike path, you won’t be back.

But I’m sure you realize NYC is crowded as hell, right?
By the way, every e-bike on the road is one less car on the road.

IMBA has been under a tremendous amount of political and financial pressure to adopt an “industry-friendly” e-MTB policy. By digging in and understanding some of those pressures, it’s really no surprise that they continue to attempt to “thread the needle” on policy issues. First, the announcement is truthful when they disclose that “IMBA’s Board of Directors updated its 2015 position on e-MTBs”. That’s because public policy is solely approved by the Board and developed by the staff. The reality is that IMBA’s members, chapters and chapter leaders have no established way to provide input on policy issues. Their “bikes in wilderness” policy was developed by a former Executive Director and approved by the Board with no member input too. That’s not the way a membership association is supposed to operate, but IMBA’s chapters and members have been letting them get away with it for a very long time. Second, since there was no straight answer to the question “How influential is the e-MTB industry in directing IMBA’s work on the e-MTB issue”?, here is some truth: for over a year, People for Bikes, Shimano and SRAM have been actively lobbying the IMBA Board to adopt an updated e-MTB policy that was much more supportive. It’s really all about increasing bicycle industry revenues through higher sales of e-bikes here in the U.S. Big surprise, right? After all, financial “contributions” to help rescue a near-bankrupt IMBA are at stake….

You make some good points here. But isn’t “threading the needle” exactly how a membership organization should operate? IMO, a group like IMBA should seek policies that serve all of their constituencies including industry, volunteers, enthusiasts, and land managers. Finding just the right middle ground is exactly like threading a needle (not easy), and apparently it’s a thankless job too.

I personally think IMBA has found a nice balance here. The updated policy is neither friendly nor hostile toward e-bikes.

It seems like the IMBA has been serving someone else other than it’s members for quite a while now. Not sure who it is they are compromising with but they go against what their members want all the time.

Yes, “threading the needle” is a thankless policy strategy that mollifies the centrists and alienates those with views on either end of the spectrum or issue. How is that working for the sport of mountain biking when the resulting divisiveness and lack of unity causes even more divisiveness and lack of unity, perhaps on important access or trail protection issues? However, the point here is that IMBA is not developing policy positions according to how a membership organization should operate. Policy positions are developed by staff and approved by a small board of directors (currently 13 members), of which only one member is a chapter leader, without any defined process for input by the members. If members or chapters feel strongly enough to have a say in IMBA’s policies, their only path is to lobby the staff or board. That’s also known as the “squeaky wheel gets the grease”. Is that how approximately 33,000 members want their association to be governed?

| Policy positions are developed by staff and approved by a small board of directors (currently 13 members), of which only one member is a chapter leader, without any defined process for input by the members.

If you look at how most non-profits work, board members are often chosen based on their abilities to raise funds, not necessarily based on their ability to represent various constituencies. I’m not in that world so I can’t say how effective or wise this is, but it’s pretty standard. Of course the board members themselves can and do collect member input–surveys, staff queries, conversations, etc.

Looking at IMBA’s board, they actually have a mix of club representatives (MORE, Midwest chapters), finance guys who can fundraise, brand reps (Yeti, SRAM), retailers (REI), and legal/policy experts. Again, I personally see IMBA as representing all of mountain biking, not just the grass roots, which in theory gives them more clout and credibility in the world. Also, keep in mind that IMBA staffs regional groups like SORBA, so there is no need to take up a board seat with those staff members.

| Is that how approximately 33,000 members want their association to be governed?

I guess I’m not sure what the alternative is. Are you suggesting membership organizations should hold an organization-wide vote for every decision? Should the person who puts in 200 volunteer hours every year get the same vote as the person who just pays their $30 dues? I don’t have an answer either way, just suggesting that governing through direct voting could be difficult to manage and might not yield the best results.