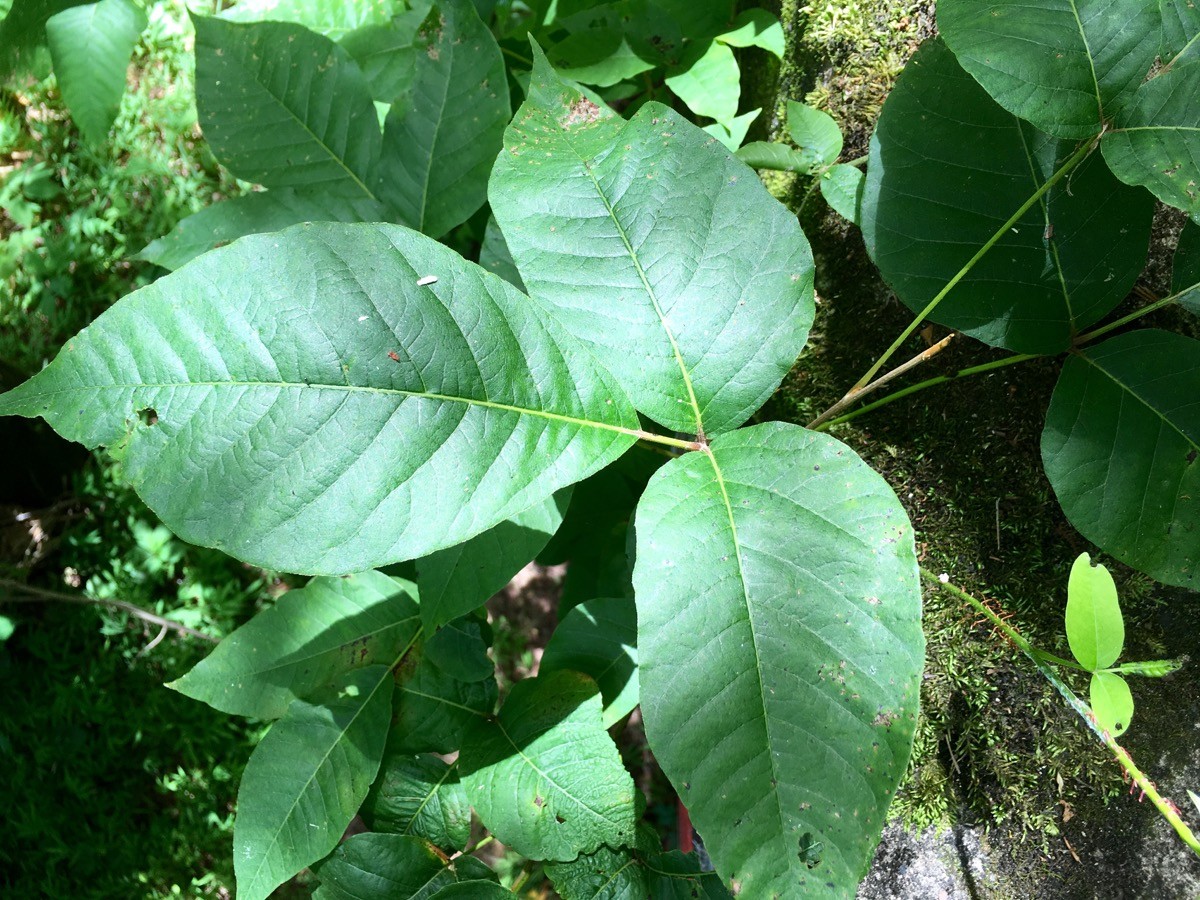 Mountain bikers are generally a pretty tough and resilient lot. We’ll point our bikes down ridiculously-steep slopes, plow through rock gardens at mach speed, and launch ourselves into the air without a cushion in sight. But there are two plants most mountain bikers just don’t want to mess with: poison ivy and poison oak.

Technically, poison ivy and poison oak are two distinct plant species, but they both produce urushiol, the stuff that makes skin itch after exposure. Mountain bikers along the west coast of the USA are more familiar with poison oak, while mountain bikers pretty much everywhere else can find poison ivy lurking beside the trail. In a few states–including Georgia–where I live, we have both poison ivy and poison oak. We also have poison sumac but fortunately, that stuff is rarely found in mountain biking areas. 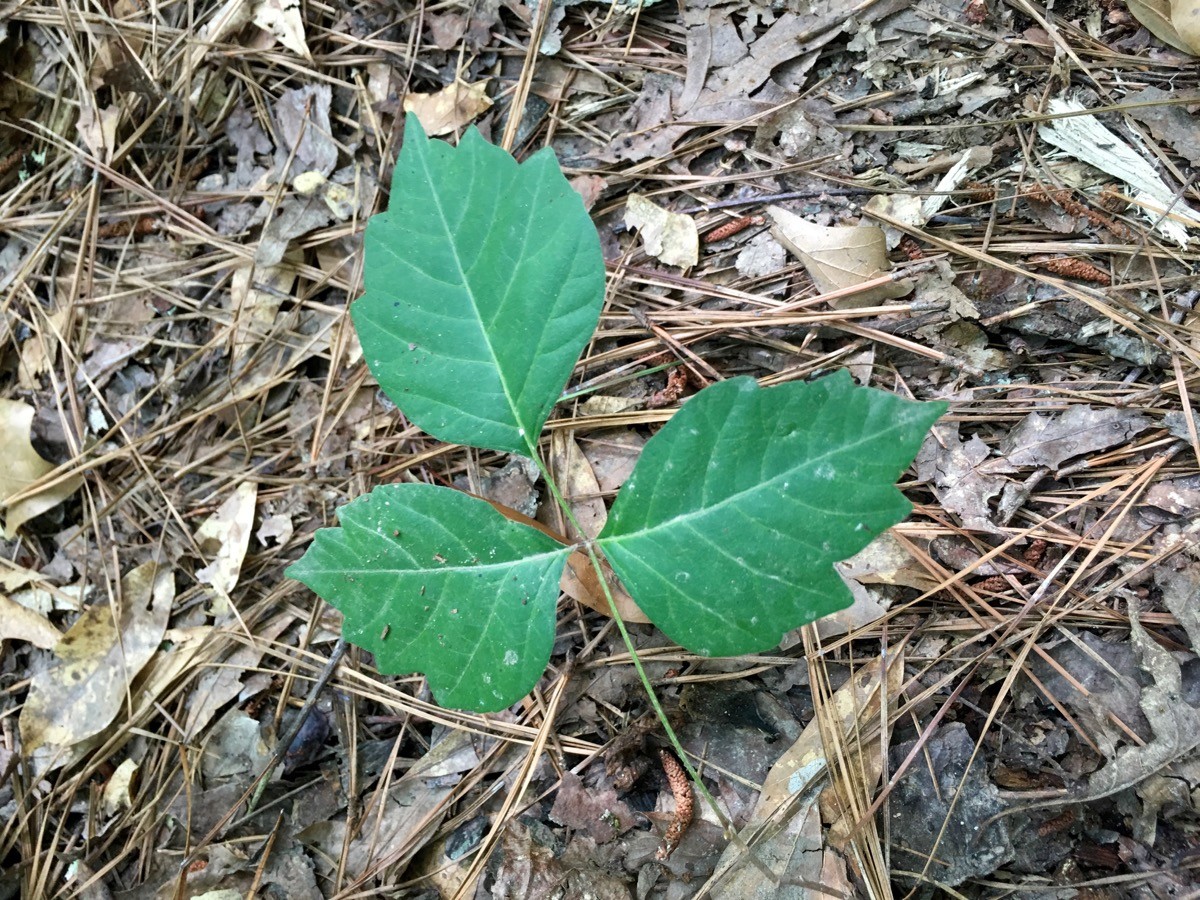 Poison ivy can grow as a shrub, climbing vine, or ground cover. The plant grows clusters of three leaves which turn red in the autumn before falling off the plant in winter. The climbing vines are often identified by their hairy bark. Poison ivy flowers in the spring and produces white berries in the fall.

Most mountain bikers are allergic to poison ivy and poison oak, though somehow about 15-30% of them are not. However, repeated contact with poison ivy or poison oak can break down the body’s defenses for those who are not initially allergic. This has certainly been my own experience: as a child I was never affected by poison ivy, despite spending my summers playing in the woods. But now as an adult, I do react to poison ivy exposure a couple times each summer.

Interestingly, mangoes are in the same family as poison ivy, and the sap from mango trees and even the oil from mango skin is similar to urushiol, the nasty stuff that makes people itch.

One final bit of bad news: According to this Wikipedia article, a study by the University of Georgia found that poison ivy is “particularly sensitive to carbon dioxide levels, greatly benefitting from higher concentrations in the air.” Whether you believe in global warming or not, studies have shown that poison ivy’s “growth and potency has already doubled since the 1960s,” and is set to double again if atmospheric carbon dioxide levels continue to rise. Ouch.

Covering exposed skin is a simple way to avoid contact with poison ivy and poison oak, though in the summertime that’s often impractical. I do try to wear tall socks even in summer to avoid the low-lying stuff.

Another way to avoid exposure is to stick to high alpine rides. While poison ivy and poison oak can be found in pretty much every US state, the plants don’t generally grow higher than 5,000 feet above sea level.

If you know you’ve been exposed to poison ivy or poison oak during a ride, try to wash the affected areas of your body as quickly as possible with soap and cold water. From what I read in my research, this is really only effective if you’re able to wash within an hour of exposure, which is pretty much impossible for most mountain bike rides. But hey, it’s worth a shot if you have access to running water and soap!

Remember to wipe down your bike and equipment after a ride as well, as urushiol can cling to surfaces, only to come into contact with skin later. Tools used for trail work are especially susceptible, especially if they’ve been used to cut poison ivy or poison oak plants.

Allergic reactions to contact with urushiol generally occur within a week of exposure. Reactions can include severe itching, redness of the skin, and eventually, blisters.  These symptoms can last from one to four weeks, even with treatment.

While there aren’t any treatment methods that will “cure” a poison ivy or poison oak reaction, there are some things you can do to minimize the symptoms. Calamine lotion, Burow’s solution, and even oatmeal baths can help reduce itching. Antihistamines may also help calm the allergic reaction for some sufferers.

Some people believe that scratching a poison ivy reaction makes it spread on the body, but fortunately this is not the case. As long as all the urushiol has been cleaned off, the reaction cannot be spread through scratching or touching oozing blisters.

Poison ivy and poison oak are a fact of life for mountain bikers, worn as a badge of honor by some, avoided like the plague by others. Respect the bush.

Here is how you fix it:

My friends and I have a system we use that works pretty well. We apply Ivy Dry Defense before we ride. It helps to prevent the urushiol from absorbing into your skin and as a bonus has sunblock in it. After the ride we wash thoroughly with Technu and then soap and water.

If you get a rash use Technu Extreme. It clears up the rash and deadens the itch. The earlier you catch the rash the better it works. Forget calamine. It is less than worthless.

Poison ivy is horrible here in Knoxville, TN. It is impossibly to avoid it on many of our trails in the summer. We still get the rash, but less frequently and less severe with this system.

Our plant “friend” in Mongolia is stinging nettle. Fortunately, we have no poison ivy or oak. The nettle stings and burns immediately after contact and lasts for an hour or two. It is usually found only in disturbed areas. So on the trail it is rarely an issue. You have to be careful though in your staging areas before and after rides.

After you realize you have a rash you knows is poison ivy/oak, clean it well with technu or similar. If it is not improving you may need a couple weeks of prednisone. One awesome help is hot water therapy. After your rash has been cleaned of the poison ivy/oak oils, you use as hot water as you can tolerate (avoid scalding yourself) to rinse until the itching goes away. The physiology is the hot water over stimulates the nerve receptors that transmit the itch feeling. You can experience no itching for hours at a time doing this. Advice from the MTB Doctor

…and antihistamines don’t help because it’s a contact dermatitis, the chemical histamine is not involved…so a histamine blocker does no good. If it is however a rare true allergic reaction to poison ivy/oak, then it could help.