Randy “Dean” Mason has been around Moab for a while; long enough to know that there was a service void somewhere between a taxi or rental cars and a shuttle to the trailheads. Moab is one of the most popular mountain bike destinations in the world, and when he was wrenching on bikes in the local shops, he saw customers come in time and time again that wanted a lift to a trailhead, but they had arrived in town hours after the regular groups of shuttles had dropped riders off at trailheads for the day.

The well known players in town, Coyote Shuttle, the Whole Enchilada, and Moab Cyclery typically wrap up their shuttle runs before noon. With plenty of daylight left, and a number of customers that wanted something other than a lift from the bike shop to the start of Mag-7 or Porcupine Rim, the Trail Taxi was born in the fall of 2017.

Mason started with a Jeep Liberty, then quickly bought a Honda minivan to fit more people. Now, his fleet consists of two Honda minivans — one is extra in case the other breaks down — and the iconic taxi car, a Ford Crown Victoria. While it wasn’t the most functional around Moab, Mason had to have it.

“The Crown Vic I just wanted. It seemed cool to have a classic taxi,” he says. “Those things are pretty indestructible.” 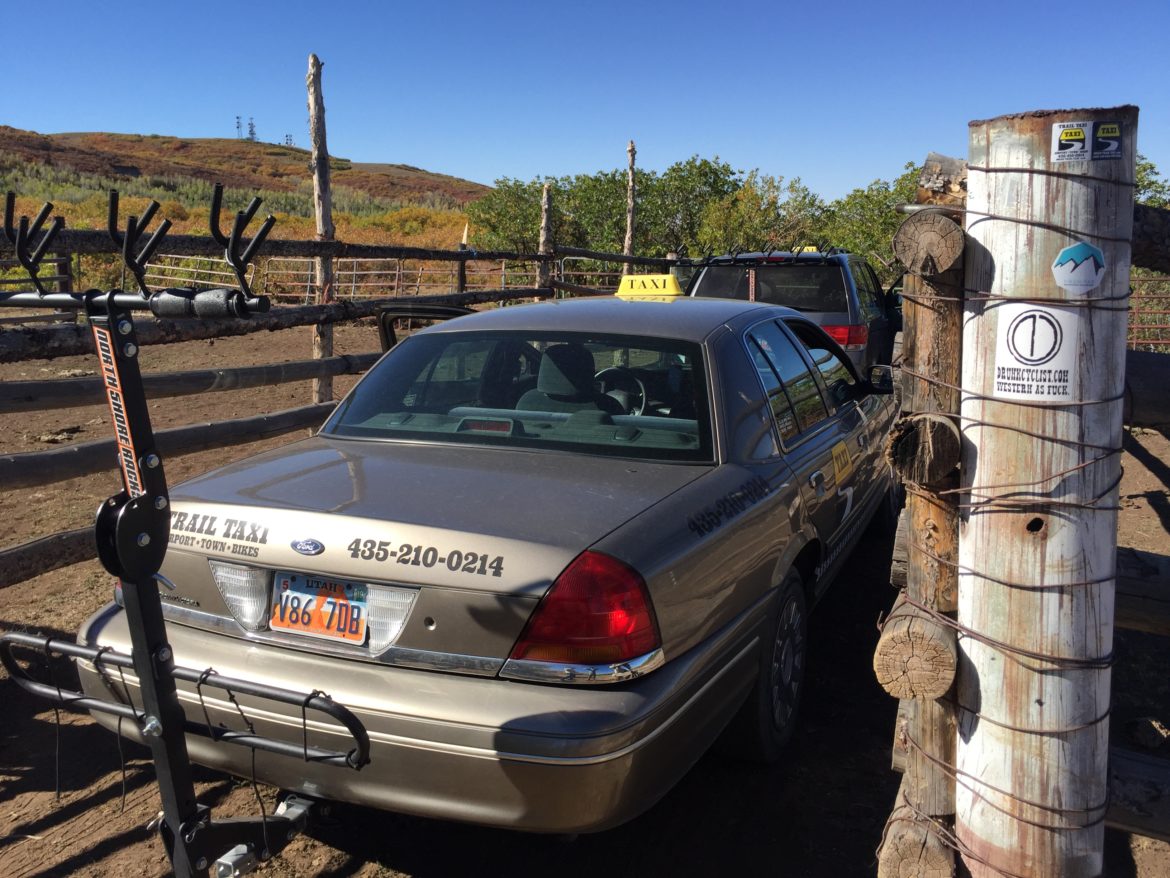 He mounted a North Shore rack to the back of the Crown Victoria and welded it on the hitch receiver for added security. He’s also installed airbag suspension in the vehicles to support the added weight of a bunch of mountain bikers and bikes. Loaded down, the vans can sag quite a bit. With a bike pump, he can air the suspension up to about 35psi which brings the vehicles back up to normal ride height.

Trail Taxi debuted with a boom. Mason says the first season kept him quite busy. He hires some part-time help during peak seasons now, but mostly it’s just him. He does about 90% of the driving and handles all of the administrative work. The driving adds up, because Trail Taxi is far more than just a shuttle to a trailhead.

Mason picks up people from the airport in Moab or even Grand Junction. They also get calls from the Amtrak station in Green River. He has mountain bikers that ride the Kokopelli trail from Fruita to Moab. When they get into town, he can take them and their bikes back to their cars in Fruita. An Uber would cost roughly the same, but most Ubers don’t have bike racks.

Even though the Trail Taxi service is distinct from the regular shuttles in Moab, Mason feels that he hasn’t been welcomed with open arms by everyone. Some shuttle companies feel like he’s poaching their business, he says.

“We’re not taking a big percentage of their business. We tried to think of something that wasn’t directly competing with the shuttle companies.” Trail Taxi hasn’t undercut their prices either.

Mason sees a different type of customer that wants a Trail Taxi than he used to see when he was driving shuttles for other companies. His services are best suited for small groups, from three to six people. When single riders call him for a lift to a big ride, he often encourages them to use a shuttle instead because his service is more expensive for a single person.

He says he often sees a higher-end clientele that wants a more private experience, rather than piling in a shuttle with ten other strangers. Other customers are on a time crunch and willing to spend money if they can get a custom pick-up at their preferred time and location.

“The good thing about being small is that we can offer all these custom solutions for people. Or we have people that we pick up at 6am if they need to get a ride in before they spend the day with their families.”

The Forest Service has had a moratorium on shuttle permits for the past three years. Without a shuttle permit, Mason can’t drop customers off to ride the Whole Enchilada. Instead he bought some private land off of the Loop road so he can drop people off near the top of the Lower Porcupine Section in a private lot and stay on paved road. He says there are still a lot of riders satisfied with that option. 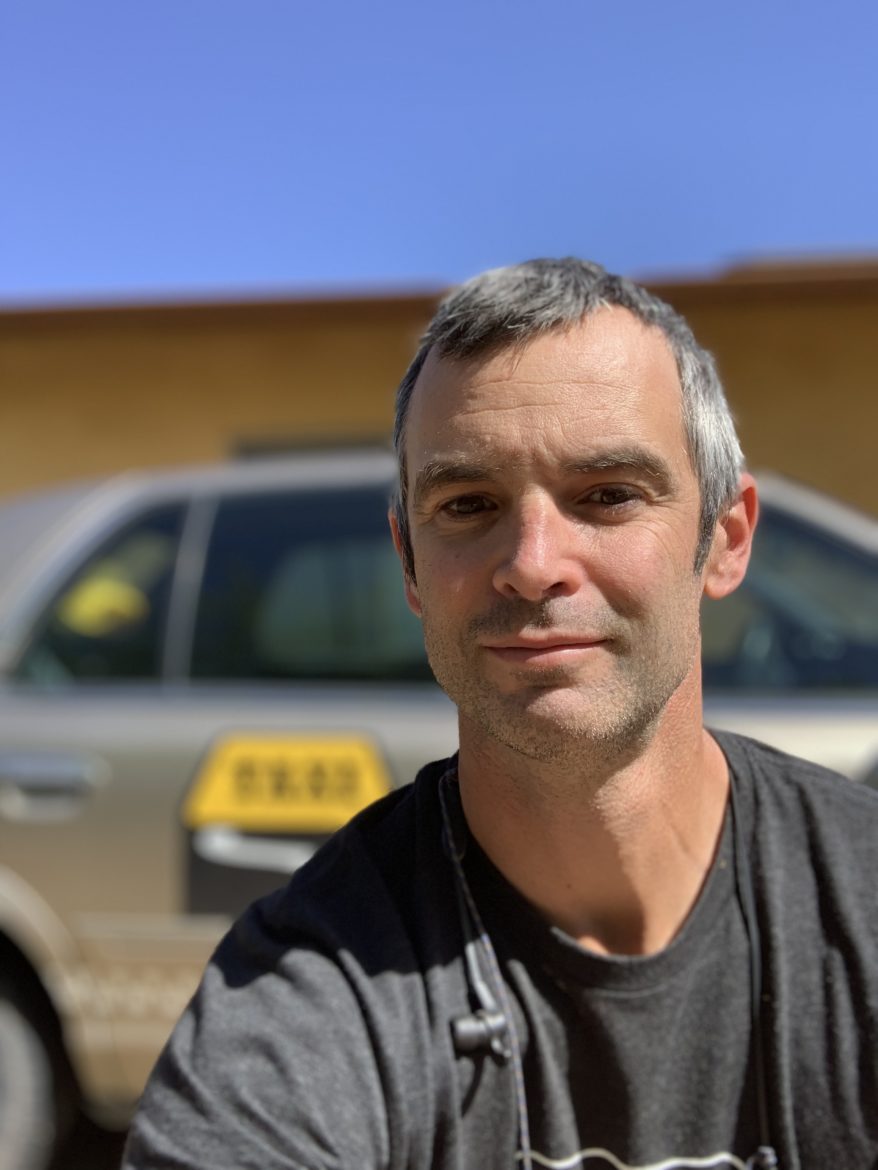 The other thing that Mason didn’t foresee was having to go by a different first name. His actual first name is Randy, but now goes by his middle name, Dean. It started to be a problem when he picked up more and more European mountain bike tourists. “The Europeans like to chuckle when you tell them ‘I’m Randy,'” he says. “They’re not used to that name.”

Trail Taxi has been busy enough to keep Mason happy. Uber and Lyft are now more operational at night, which gives him a break. He’s busy picking up customers from the airport and taking them to the trail. He thinks United will add more direct flights from other cities to Moab soon. If that gets overwhelming, he’d like to add another full-time employee.

Either way, he knows his approach is different than the other shuttles and customers enjoy it.

“They really appreciate that they can call one person and have all those needs met for them.”

He maintains a stacked list of five-star reviews on Yelp, Google, and Facebook. He replies to almost all of them.

“Would give it more than 5 stars if I could! A great way to get your bikes from the town to the trails,” wrote one customer on Google. “Quick and punctual service, very knowledgeable of the trails and areas, helped us load and unload our bikes. We ended up getting caught in a rain and hail storm and they came back out to pick us up.”

“I enjoyed working with you. Thanks for taking the time to review us!” Mason replied.

Singletracks
Mountain Bike Protection for your Brain, Body, and Bike
Community
From Pup to Trail Dog: How we Prepared our Singletrack...
Gear
Stiff Daylong Comfort in the Scott Volt Clipless MTB Shoes,...
Progression
MTB Riding Position Breakdown: The How and the Why
Subscribe
Login
Please login to comment
3 Comments
Most Voted
Newest Oldest
Inline Feedbacks
View all comments

Randy and his service are awesome!

Used him several times last fall for multiple trailhead drop offs in Moab. For four of us it was both cheaper and infinitely more convenient than a standard shuttle. We had a bike mechanical issue before one ride and he insisted on going out of his way to two shops to get it resolved before we hit the trail. Highly recommended!

“Even though the Trail Taxi service is distinct from the regular shuttles in Moab, Mason feels that he hasn’t been welcomed with open arms by everyone. Some shuttle companies feel like he’s poaching their business, he says.”

Competition is fundamental to business. It’s always so pathetic when companies complain about it. I wish this guy the best of luck.