Not as in “whoops, I dropped the hamburger on the ground,” but whoops as in “YEE-HAW!”

The new mountain bike trail at Paynes Creek is absolutely chock-full of whoop-te-dos! They vary in size from small to massive, but all of them are easy to negotiate, making this a very beginner-friendly trail. However, if you are an advanced rider (or just have an extra-large dose of crazy), you can blast through many of these whoops at high speed, airing off of the top of one and landing on the transition into the next. The landings added to the thrilling g-forces at the bottom of the U’s are sure to put your rear suspension to the test, despite the almost complete lack of rocks and roots on this trail. 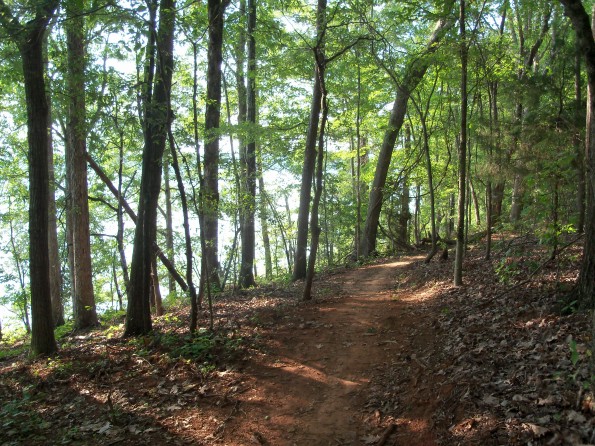 And of course, being the great journalist that I am, I totally forget to take a picture of a single whoop. Sure, it might have had something to do with how much fun I was having riding them!

While the gorgeous flow of this trail encourages you to drop the hammer and rail through everything, make sure you don’t get complacent: some of the biggest whoops right at the beginning of the trail (on a counter-clockwise day) will throw you into the air and have you landing on a loose off-camber corner above the water!

And while you might also think that this trail is totally flat because it’s in Northeast Georgia and lies right next to a lake, a couple of the switchbacked climbs may throw a series of tough punches to your gut.

Whether you are a beginner trying singletrack for the first time, someone just looking for pretty views of the lake, or an advanced rider ready to drop the hammer, the 7-mile long Paynes Creek trail has plenty of awesome to go around!

At this moment, Paynes Creek is about as new of a trail as you’ll ever ride, having just opened at the end of April (2011). This is the first true singletrack mountain bike trail in this section of Northeast Georgia and helps fill in a large gap in the map. Paynes Creek was designed and built through the cooperation of the US Army Corps of Engineers, the crew behind the epic trail design of FATS, the Southern Off-Road Bicycle Association (SORBA), people like you who were willing to volunteer,and even Singletracks.com.

So what are you waiting for? Plan your trip to Paynes Creek today!

Sounds like the trail turned out well, I’m bummed I didn’t get a chance to ride it after the work party this spring. We can thank the volunteers for “the almost complete lack of rocks and roots on this trail” – there was a ton of Pulaski work done to get it that way.

Paynes Creek is also great because there’s a campground and lake access right at the trailhead. It’s meant to be family-friendly but like you said, more advanced riders can have fun too.

The machines are the reason for the lack of roots/rocks. Especially the Sweco. The bigger the machine that makes the initial cut, the less roots left in the tread.

A sweco can cut thru a large root that will bog down a ditchwitch. So if building with only the DW, the operator would allow the blade to glide over top of the whole root and leave it in the trail. The sweco has enough HP to cut the root and get one side of it to “flop”. Then the handcrew comes along and cuts the other end of the root and the entire root is now gone. Had a sweco not been used, many of those roots wouldn’t have needed to be cut as they would have still been in tact in the tread.

I haven’t been back since the volunteer day I attended. I’d like to. Perhaps a singletracks meetup….