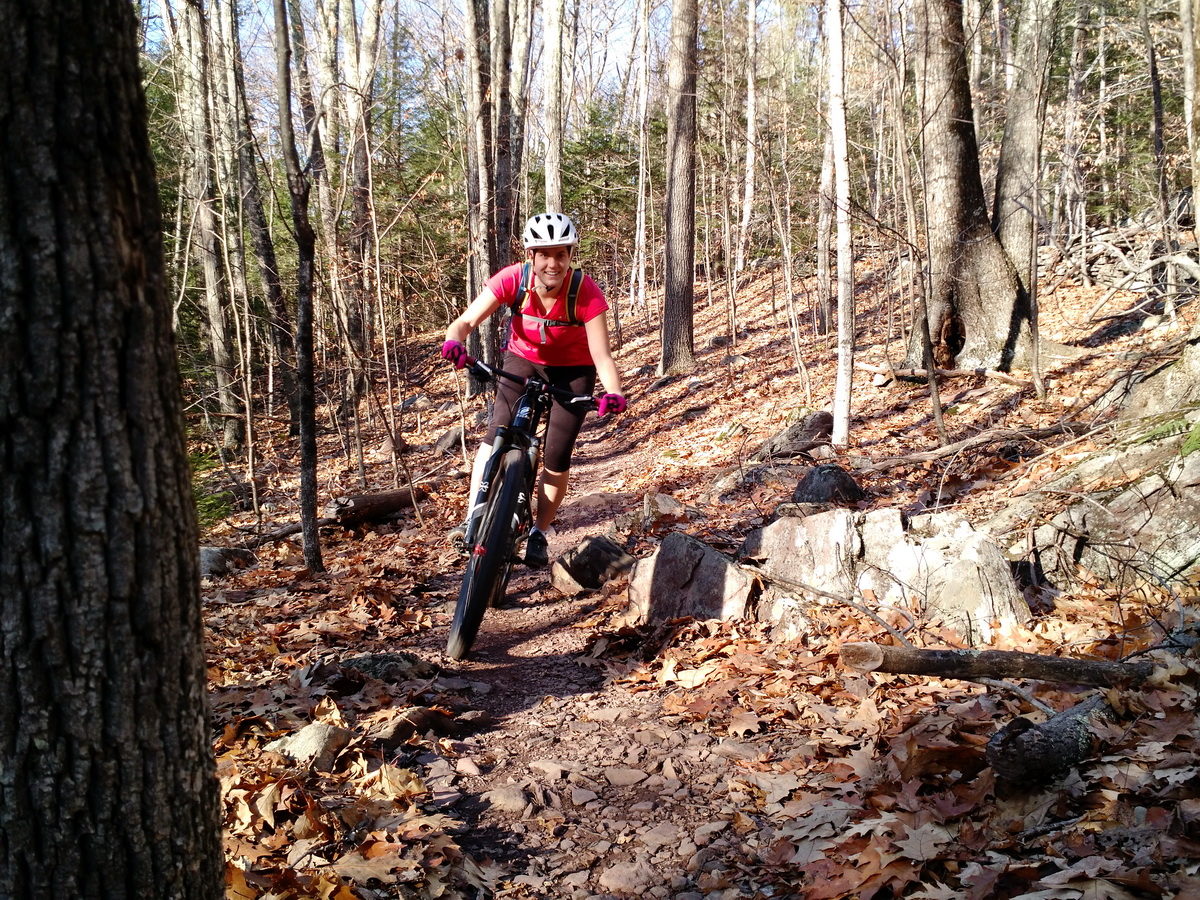 No matter how long I’ve been out riding, I always seem to find myself repeating this childlike plea. This particular day was no different in that regard, though for a November day in upstate New York, it was unseasonably warm. The sun had dropped to the rim of the Catskill Mountains, and in its late afternoon glow, I surveyed the creased map of the Elm Ridge Trail System my husband now held out to me, tracing dotted black lines with a gloved finger. The crackle of dry leaves heralded the approach of another rider, and we dragged our bikes over to the edge of the trail to make some passing room.

It wasn’t necessary. The man stopped when he reached us, grinning behind his gray beard, and leaned forward to rest his elbows on the handlebars of his bike.

“Hey there!” he panted, flipping one hand up in a tired wave. We returned the greeting, and he nodded toward our map. “You guys ridden here before?”

We told him no, we hadn’t. We’d stopped at a nearby bike shop for the map and some suggestions on must-ride trails, though, and told him what we’d done so far.

“Oh, nice–a lot of those are newer trails. But it sounds like you did hit up some of the techy stuff at the top of the ridge. That’s what I learned to ride on.” He tugged a water bottle out of the cage bolted to his frame and took a long drink. “Used to be, that was all there was out here.” I shook my head, jealous, as he gave us a brief history of the area.

“It’s so cool these are so close to you,” I told him. “We’ve got some easy riding near us that works for a post-work ride, but to get to anything like this you have to drive at least 45 minutes.”

The crow’s feet in the corners of his eyes deepened. “It’s all perspective, sweetheart,” he said. “Your local trails are somebody else’s destination.” He pointed to the map my husband was still holding. “If you’re headed out, I’d take Run Noot down. It’s a hoot.” With that, he saluted us and pedaled off, disappearing beyond a dip in the trail.

I watched him go, thinking about that last bit of old-timer wisdom. I loved my home trails. I’d spent hours honing my skills on their familiar terrain, practicing the same fallen logs over and over until I learned the technique behind it. I’d pounded out lap after lap on those tight, city park trails, releasing tension after a tough day at work. I knew them so well I could have ridden them in my sleep, forward and backward, in any season or condition. And while they’d always be near and dear to my heart for that reason, perhaps the most important thing about them was that they eventually drove me out and away, in search of new, different challenges.

And isn’t that what home is for, after all? The Elm Ridge trails are exciting in their own right. The twisting, rocky Fun Loops near the bottom are an excellent warm-up, and Levitate is the kind of fun, swoopy trail that almost makes you forget you’re climbing. Gold Mine–the newest trail–incorporates the area’s natural stone beautifully, and in some places, it’s hard to tell if the features are natural or manmade. 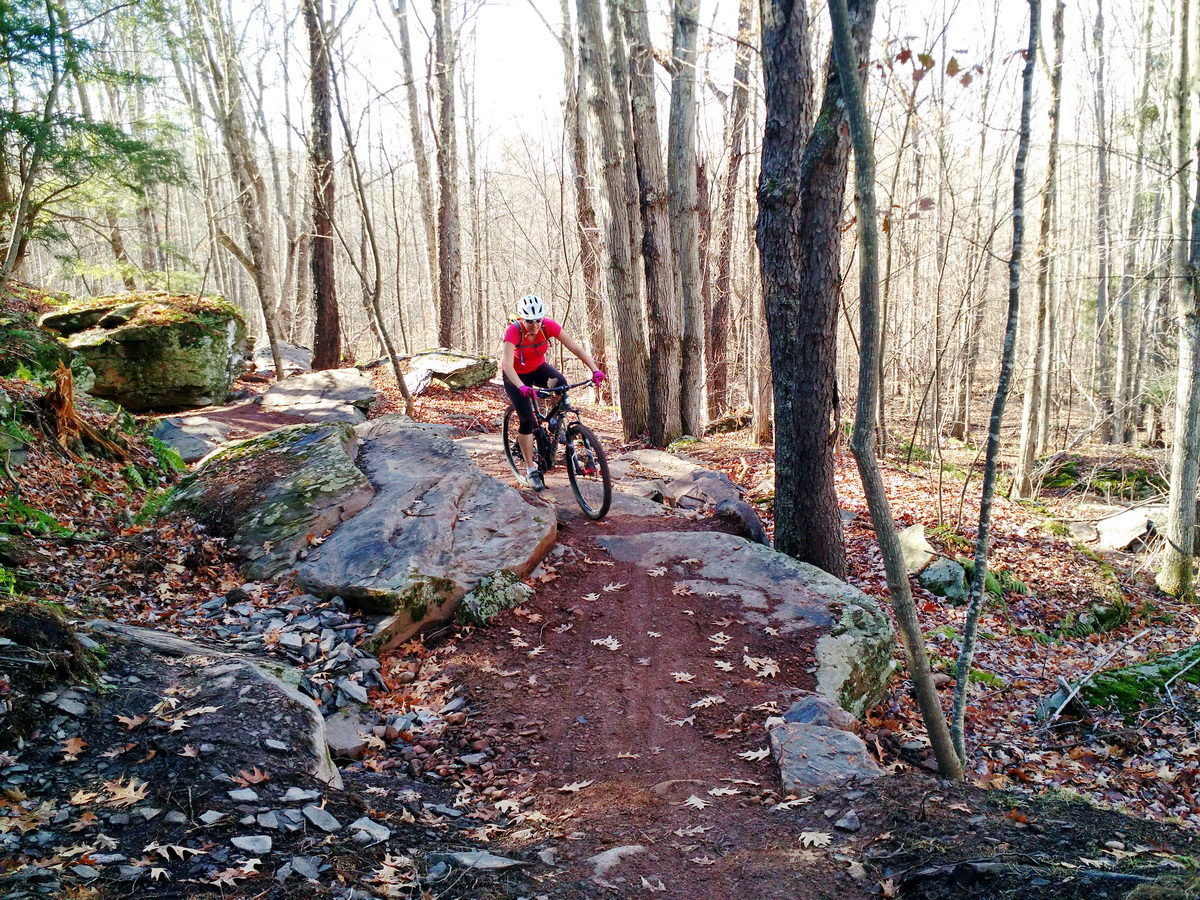 Like the grey-bearded local man told us, the riding on the top of the ridge is punchy and challenging, and every trail we took down (especially Run Noot!) is guaranteed to have even the most cautious rider whooping as they catch a little air. You have to fight to keep both your tires on the ground, and why would you want to do that, anyway? Compared to Elm Ridge, my boring, close-to-home trails are nothing.

And yet, they were my gateway to bigger and better things. They were where I started from, and where I ended up after I’d crashed (quite literally!) and burned. They were home.

When we leave the top of the ridge, we leave the sun behind, but the old man’s words stay with me. The valley where our car is parked is steeped in the blues and purples of dusk, and we zip up sweatshirts to keep off the growing chill as we load our bikes onto the rack. I’m deep in thought. If I rode this network enough to make it home, would I be as reluctant to leave as I am now? If I came to know every gritty inch of Levitate, would I still find it as much fun to climb up a thousand feet? And would the Fun Loops still be fun when I’d ridden them for the hundredth time?

I don’t know for sure, and I probably won’t ever live close enough to know. But my guess is that eventually, Elm Ridge would do for me what my home trails have already done. They would push me out of my comfort zone, developing me as a rider until I outgrew them. And then they’d drive me out and away, in search of the next adventure.

In search of someone else’s backyard trails. 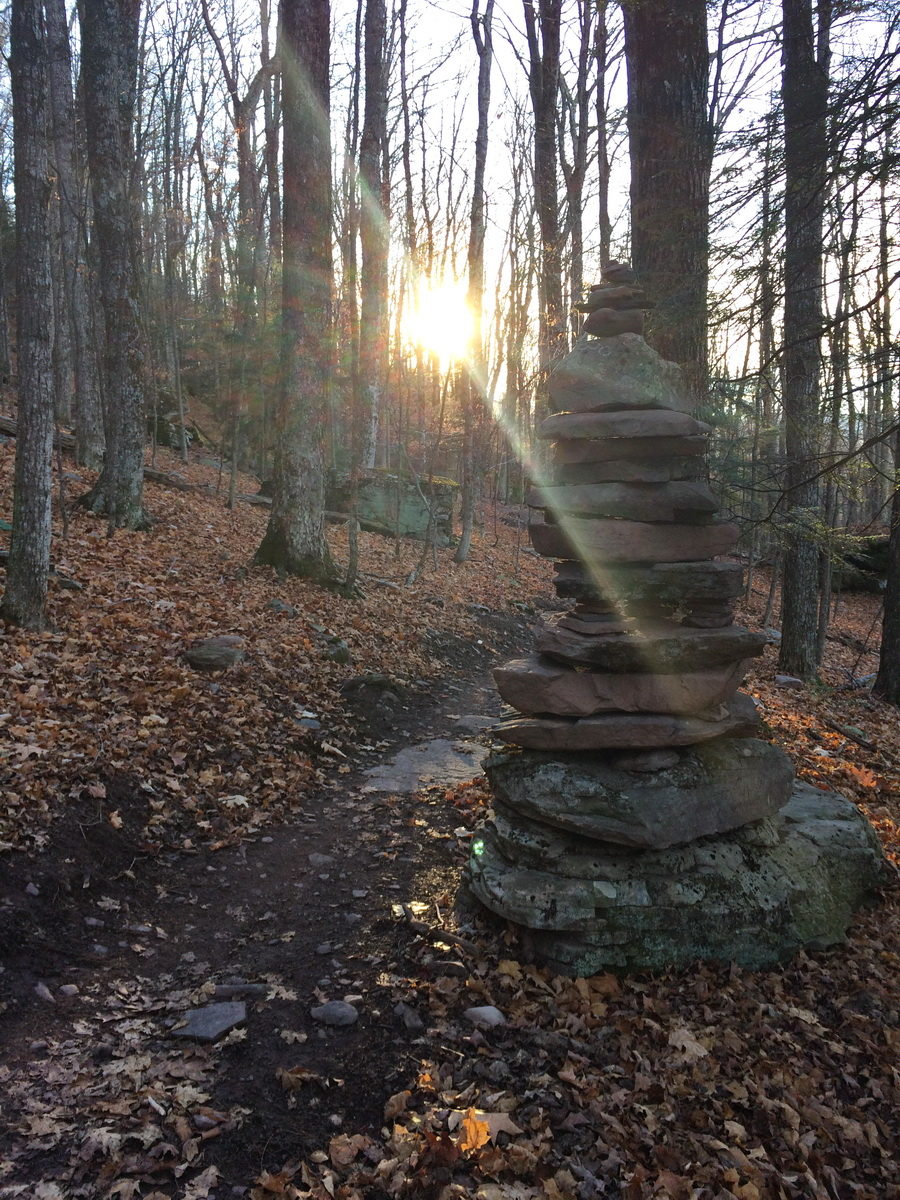 Kate Dulmes
I'm a Midwest transplant to upstate New York, and as far as I'm concerned, the best way to spend a day is pedaling along through these beautiful northeast mountains.

Excellent read Kate! Hadn’t thought about this, but its so true!

Hahahahaha. My backyard trails are no one’s destination. Good read though, definitely puts things into new perspective. Hardly anyone rides haw ridge now that there’s so much new stuff in Knoxville. And as for my literal backyard trails, that’s private property, so get off my lawn!

My backyard trails are also no one’s destination, but there’s always lots of gravel, two-track, and forest road in striking distance all set up for adventure. Still there’s a grain of truth in it, that somebody somewhere is eager to ride our trails which we all take so for granted.

I’ve been thinking lately about how much I take my local trails for granted… Yesterday Greg even mentioned them as justification in his “10 Best Mountain Biking Towns with the Lowest Cost of Living” article. It kind of drove the point home…

I have been trying to figure out a route through my back yard trails that doesn’t require stopping, scratching my head and carrying my bike to somewhere that I think the trail should be. One day I was cross country skiing with my son around the valley that I ride and saw some fat bikers riding the trails. A couple days later before the thaw a took a trail run and retraced their route. Tried it once but was way too muddy but I now have a goal. Also found out from my sleuthing that there are some really good riders around because there were tracks down some seriously rough stuff.

Great read and so true. On a recent trip out west I rode two days in Fruita, Colorado and smiling from the fun ride down Kessel Run as I was loading my bike to head toward Utah, I spoke to a young couple in the parking lot at the 18 Road area. The man asked me where in Florida I was from and when I answered Ocala, his reply to me and his girlfriend was “That’s where all those cool trails are, we should go there someday.” Recently I led a group ride with folks from Arizona, Ohio, Vermont and New Brunswick joining our local gang. Easy to take stuff for granted when it is so easily accessed.

Yep some decent trails from where I’m at takes about 20 minutes to get there…however, the really good trails usually are at least an hour away. Must be great having outstanding trails that are literally couple of minutes away from where you are located. Hopefully when I move, I’ll have trails that will be nearer to my location!