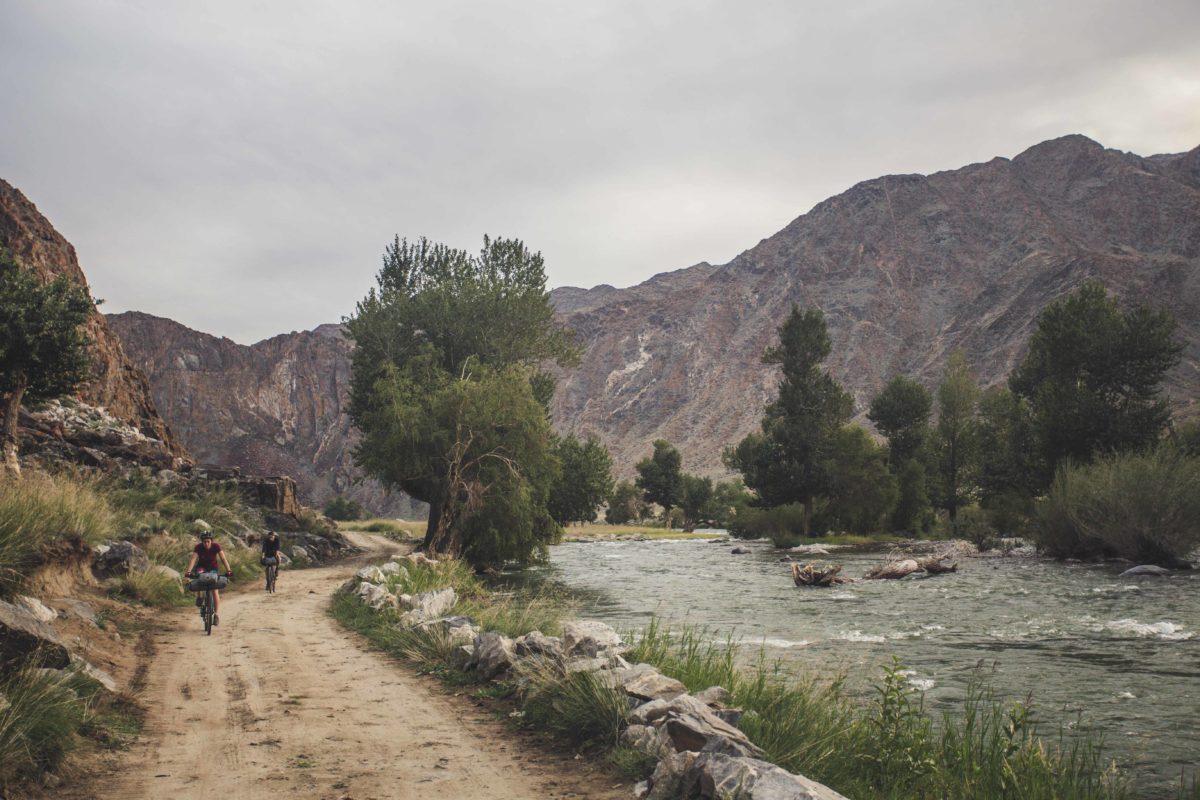 In 2014 I cycled across Kazakhstan. The flat desert and arid steppe was endless, the air was filled with the aroma of natural gas, and despite some fun times, I doubted I’d return. However, on my last night in Almaty I got chatting to a local. “You’ve done it all wrong,” he said. ”The most beautiful part of Kazakhstan is the far east: the remote Altai Mountains with their blue lakes, snow-capped peaks, and alpine meadows. You must ride there next time.” That inspiration stuck with me.

“But it involves three complex visas, countless permits, and then we don’t even know if the road is passable, let alone if that border is open for foreigners…”

In my usual unfounded optimism, I reply to Jack on the phone, “Let’s just do it, book some flights and then we’re committed — things always work out OK in the end!” And so my return to Kazakhstan began. 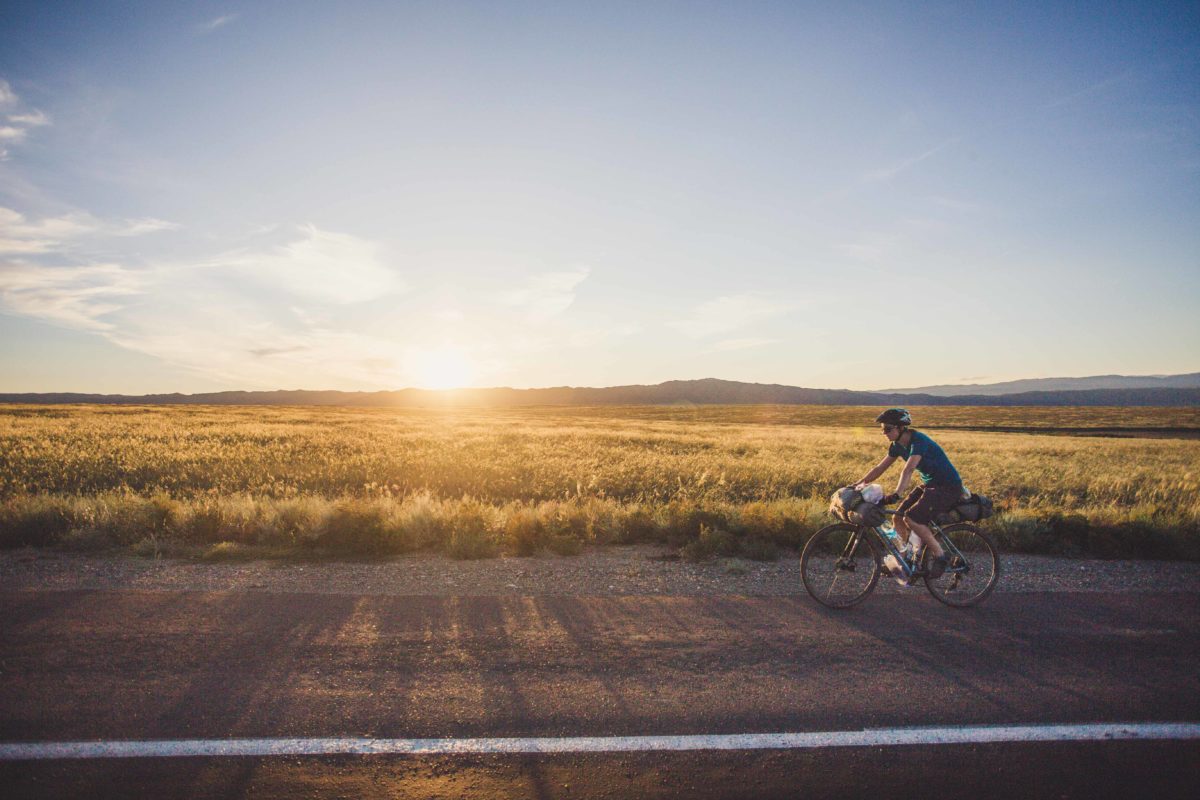 The Altai are basically the most landlocked mountains on earth. Somehow they manage to be miles from anywhere but at the same time, on a crossroads between four of the planet’s largest countries. We set out to try and bikepack a 950-mile route around them. Not only would we experience cultures and politics that change at each border, but landscapes from steppes and mountain passes to desert and moonscapes. As bike trips go, it doesn’t lack ambition. 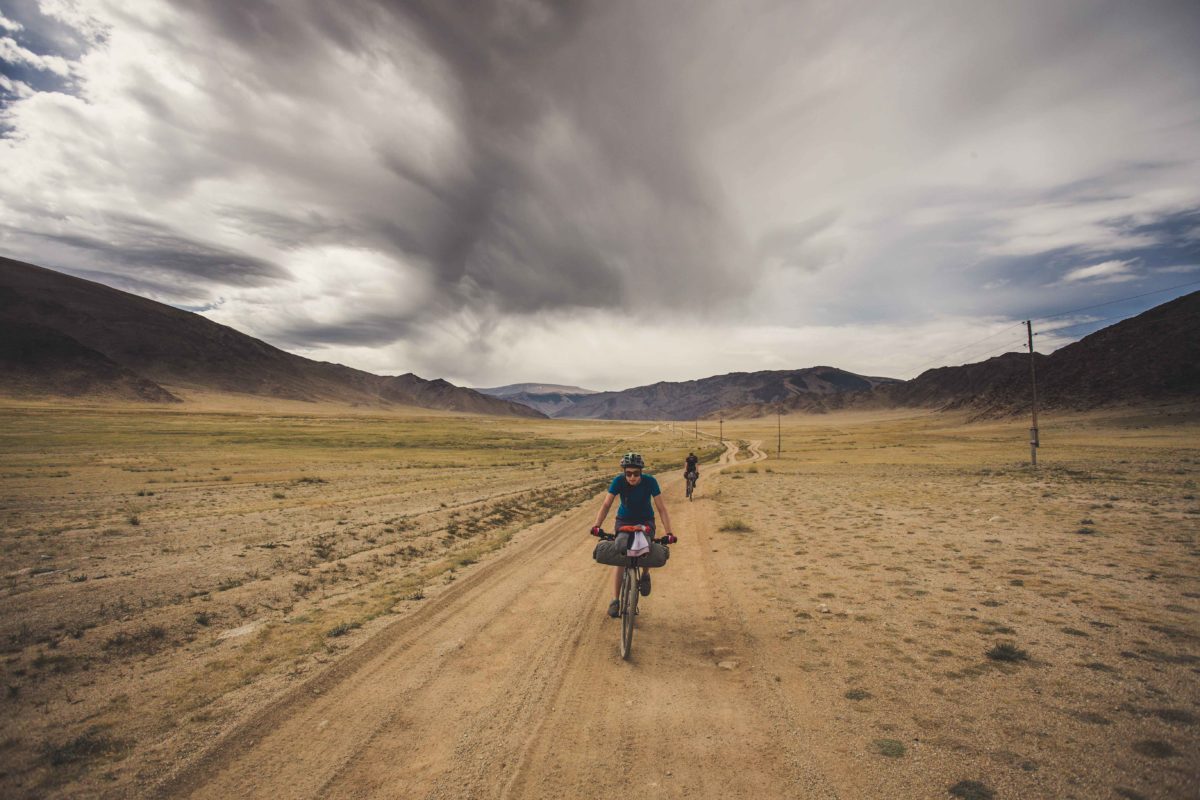 The flight lands with a thud at the Oskemen airport in Eastern Kazakhstan, the plane so small we’d had to book the bikes on with special permission. From the window we can see a battered pickup truck, ready to carry the bags. As we exit the door, the heat is stifling; we slip on sunglasses and stride to the small arrivals building to wait for baggage. For some reason, we all expected it: the bikes aren’t on the plane.

It turns out Oskemen is not a relaxing place to wait for bikes. The streets are lined with monotonous Soviet apartment blocks; on the corners are bars where a crowd of staring eyes greet. It’s a long two days before the next flight arrives. 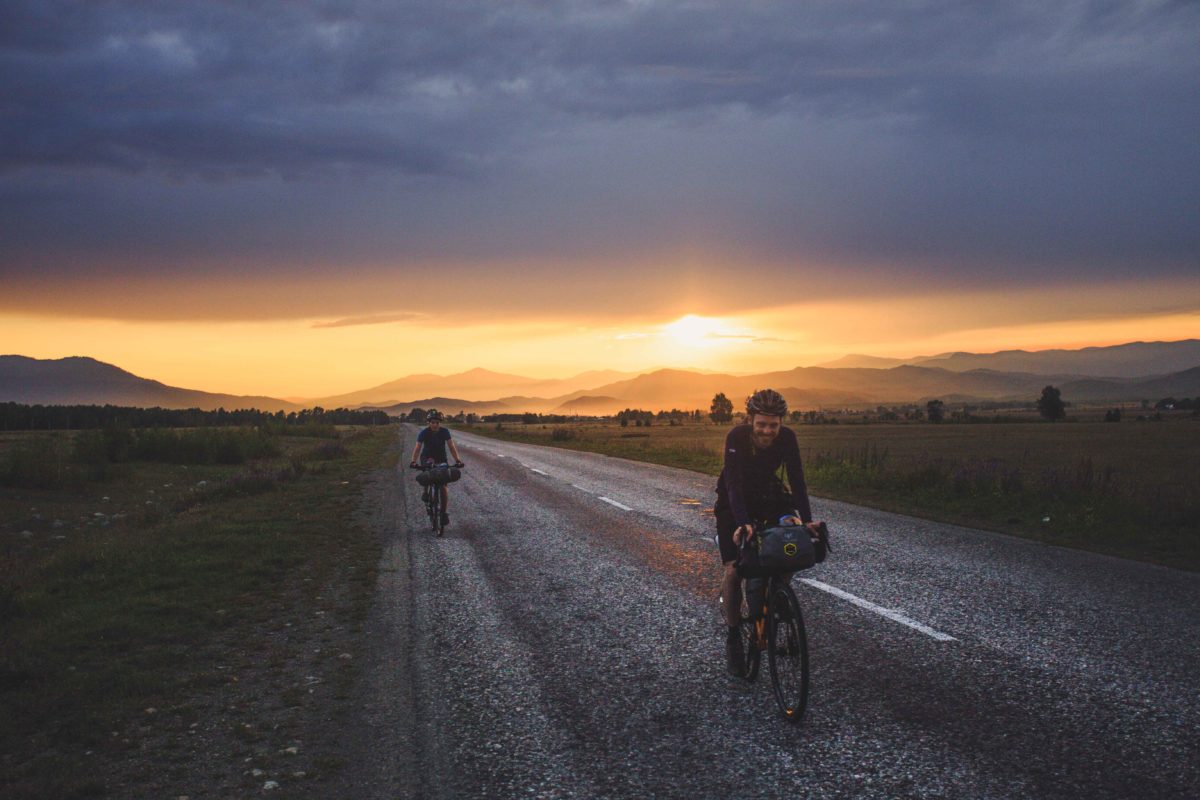 We’re finally on the bikes as we overtake a horse and cart, then get stuck behind a herd of cows. On either side of us are weathered timber houses with staring faces; this is the Kazakhstan I remember. We ride east until our shadows grow longer and finally disappear into the night.

We set up camp by the start of the Austrian Road. It’s called the Austrian Road because it was built by Austrian prisoners of war from 1915-17. Allegedly, Arnold Schwarzenegger’s grandfather was involved in its construction; either way it’s a route that evokes emotion as you see it rise into the mountains and head to China. The Road is now receding into nature, and even the two lines of dirt barely exist in places. All we know is that it’s no longer driveable due to collapsed bridges… we just hope these are passable by bike. 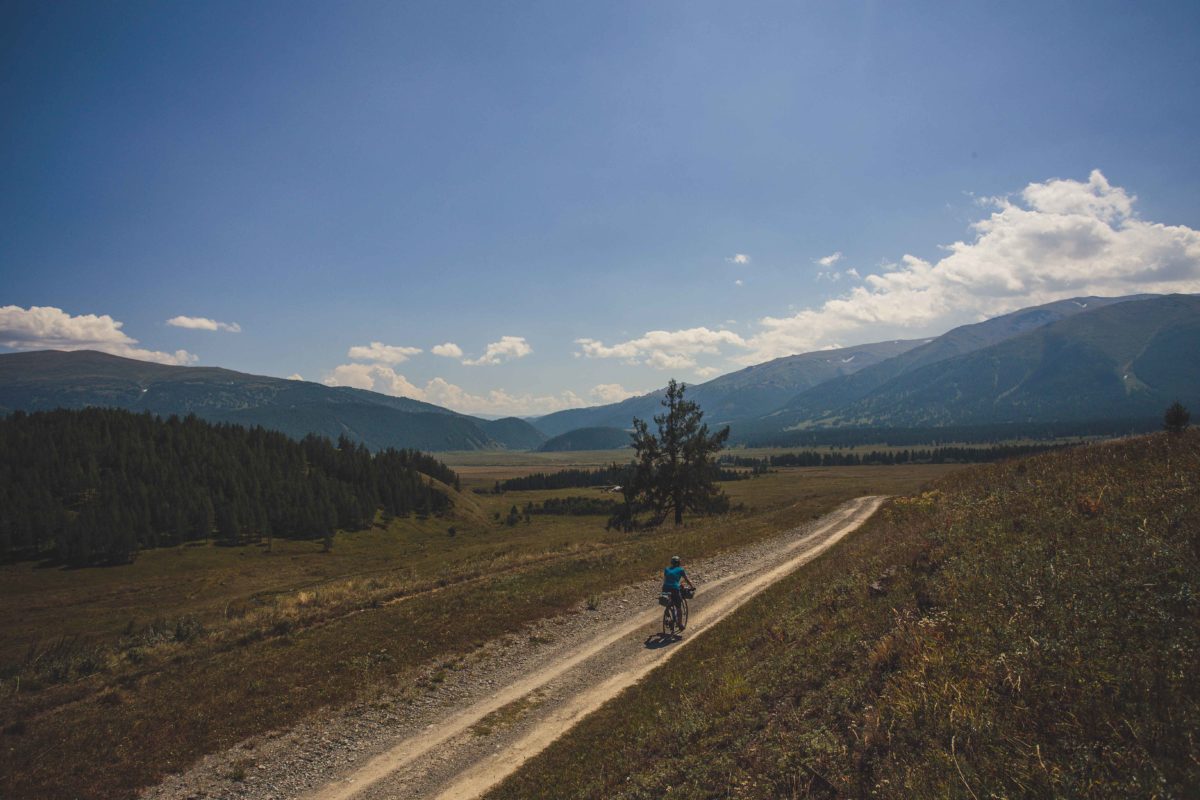 We cook breakfast by the small stream and then start the first and largest climb of 5,000 feet. It’s already hot, and the sweat is stinging our eyes. We’re going to be in restricted border zones for much of this route, and we reach our first military checkpoint. The barrier is down, but smiling faces greet us. After much paperwork, we’re free to carry on. Their final sign language implies that we’ll not make it across the river and they’ll see us again soon! With debatable optimism, we continue climbing. 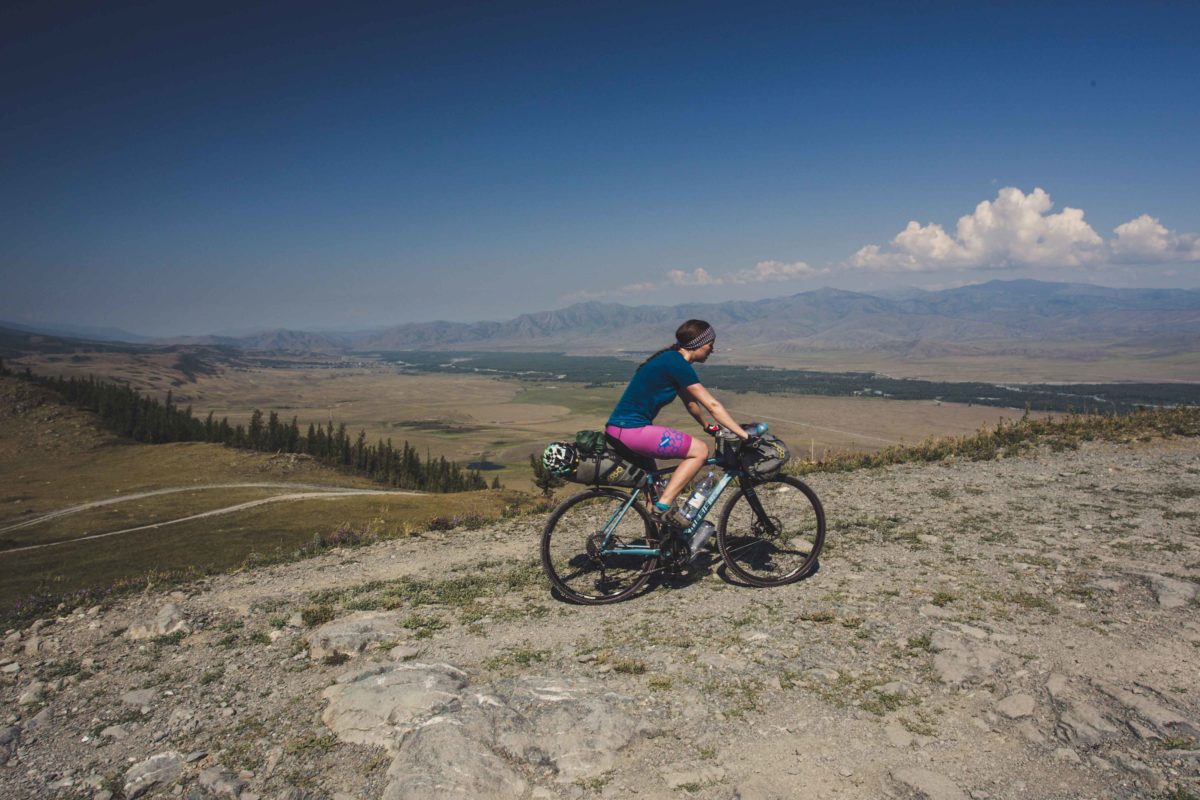 We pass the only inhabited house we’ll see today: a farm surrounded by grazed pasture. The host is very friendly, offering us chai and bread. In the basic kitchen, baby goats are bolting about, head butting our legs as they go. 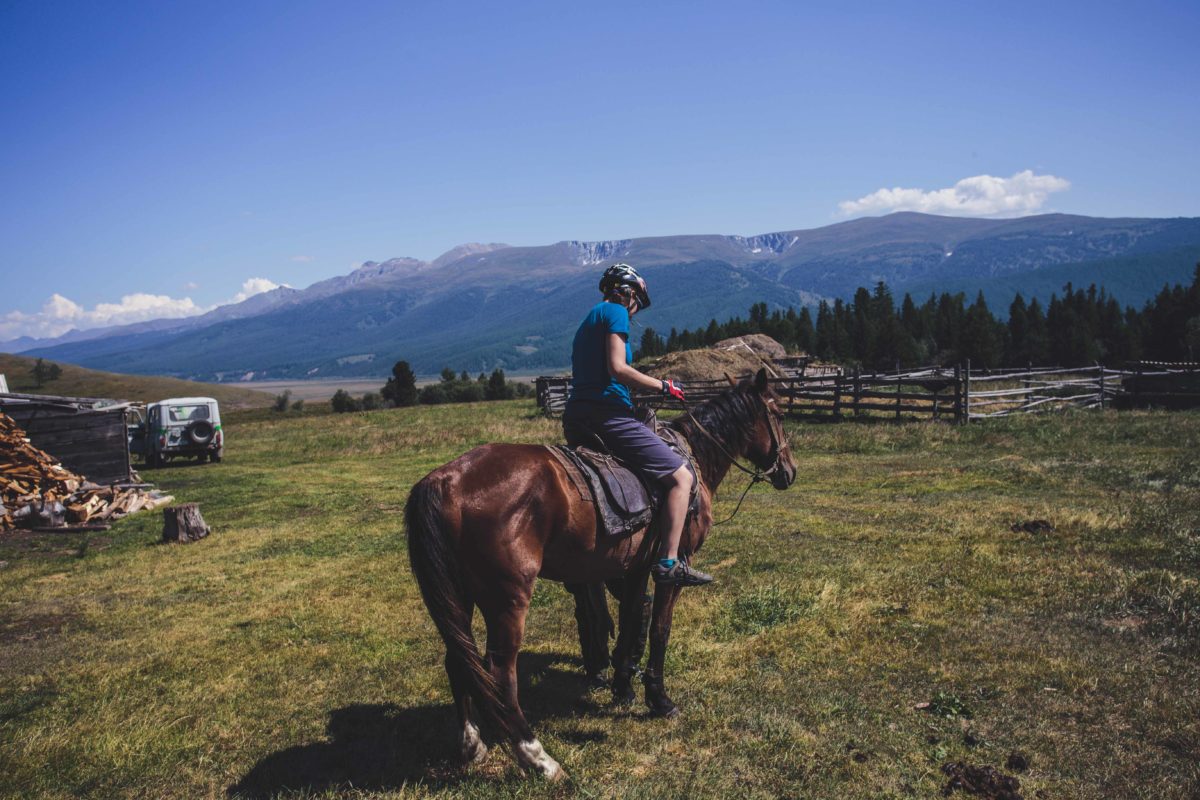 We are now riding rough dirt track parallel to the river as it heads downstream, all the time the river gaining size and ferocity. Not a word is spoken, but we all know we can’t wade across it if the bridge has gone. 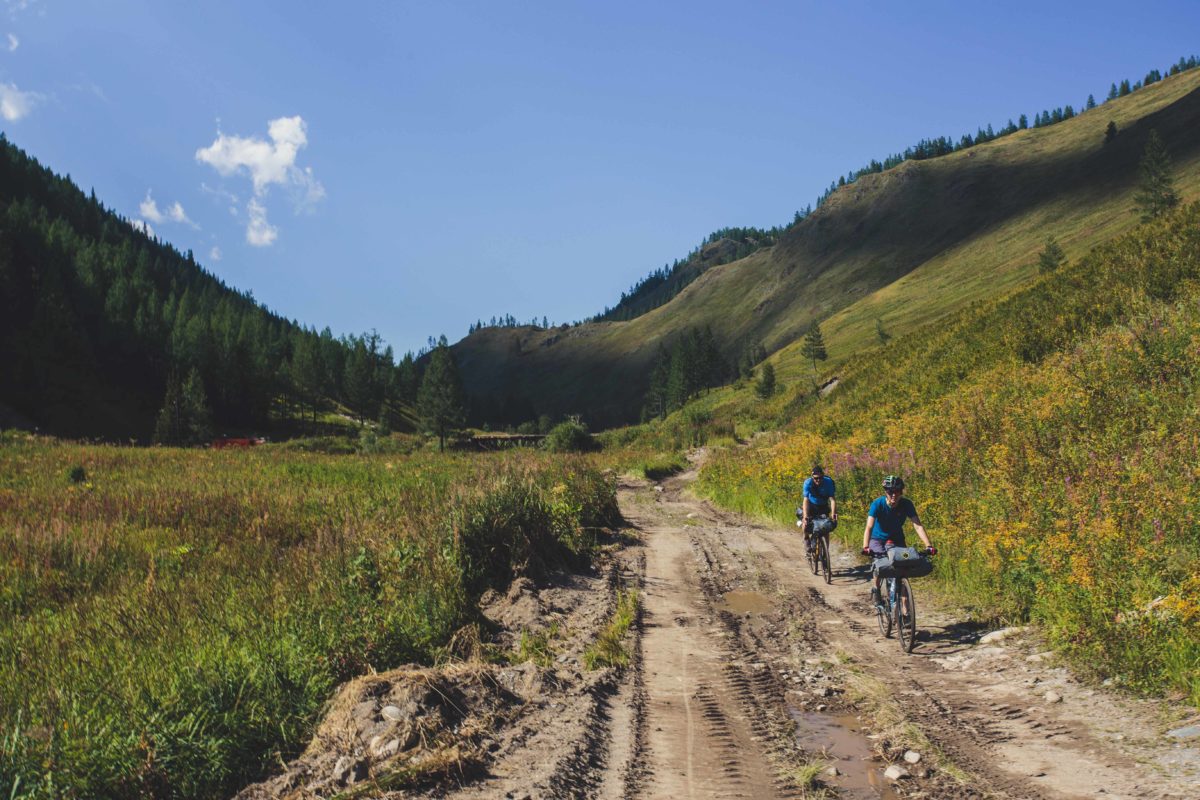 The GPS tells us the first crossing is coming soon–it’s the crux of the trip so far. We see an encampment ahead and a parked truck. As we get closer, a group in military uniform is milling around; beside them is what looks like a freshly-built bridge! We’ll be all right it seems: they’ve cut nearby trees and, complete with bark, these logs lie across the river, paving the way for us to continue. 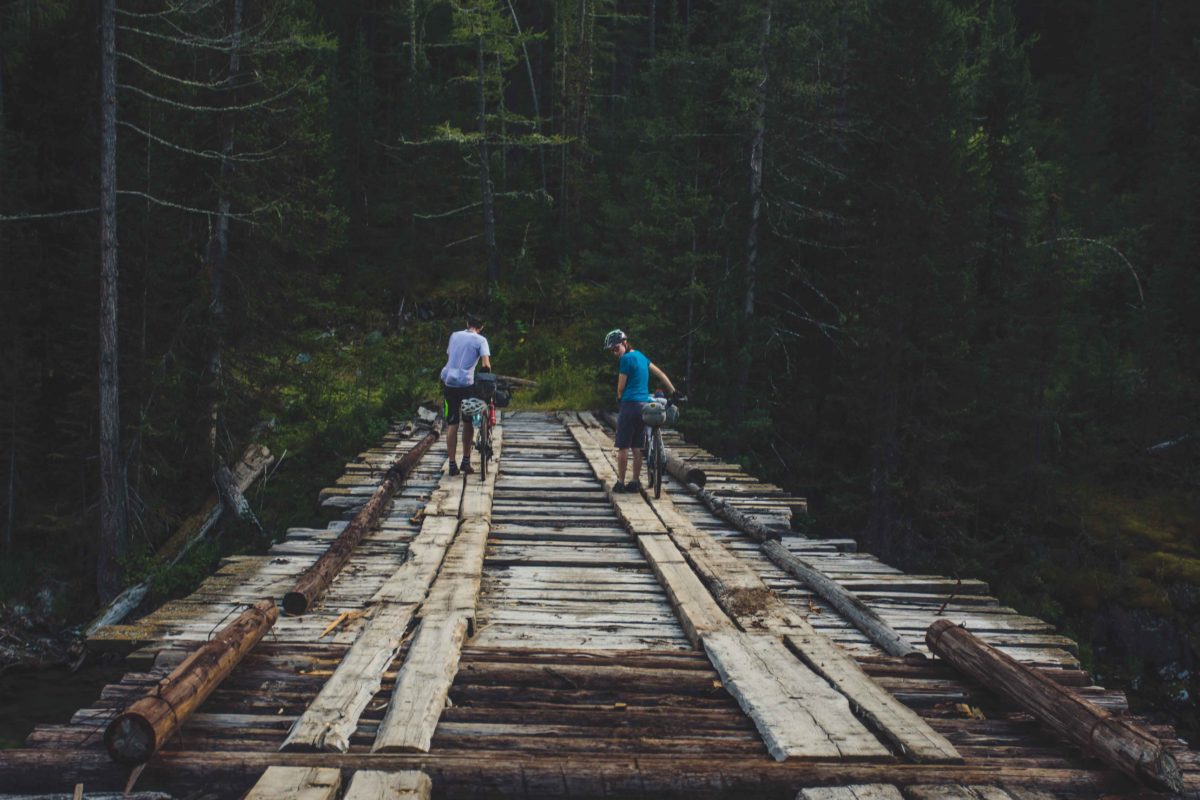 We soon get our first glimpse of China.  From the menacing border fences, the sand dunes soar toward the eagles circling above us. Under the watch of guard towers, we’ll ride a few days south on gravel roads to the official crossing point. 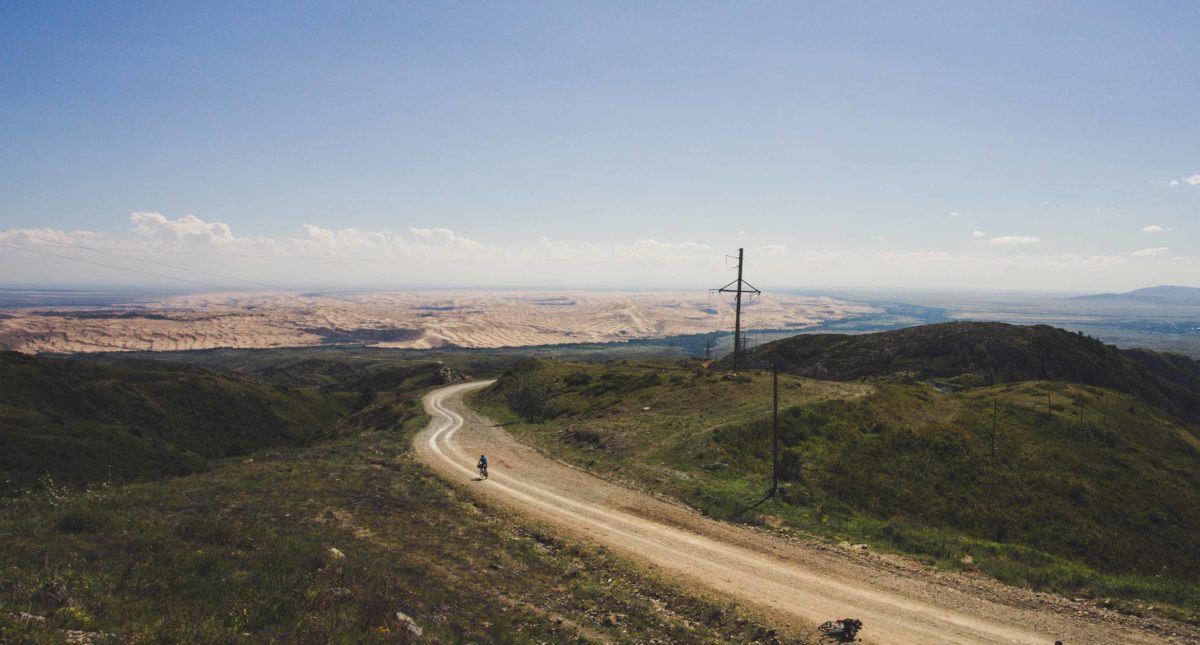 The long shadows yet again return across the arid steppe, and we seek shelter. An abandoned farm is set up and away from the border and the wind. We walk through fields of crickets and golden grasses to set up camp. The crumbling walls shelter us, and through the old window I can see Chinese border patrols with their flashing red and blue lights. It’s like a fugitive scene in a movie, and I feel uncomfortable. Trips like this are not solely about the pleasure of riding, but taking you to places you’d never choose to visit. Sometimes there’s a reason why.

After dinner, Jack calls me over. “Ed, I’ve seen something nasty.” My thoughts turn to a body or worse. He shines a head torch on the walls.

“No, there’s no tail, it’s a spider of some sort.” It’s bigger than any I’ve seen before, and with jaws that could tear through flesh, it’s a gigantic Camel Spider. I put my shoes inside the tent and seal the zips very carefully. 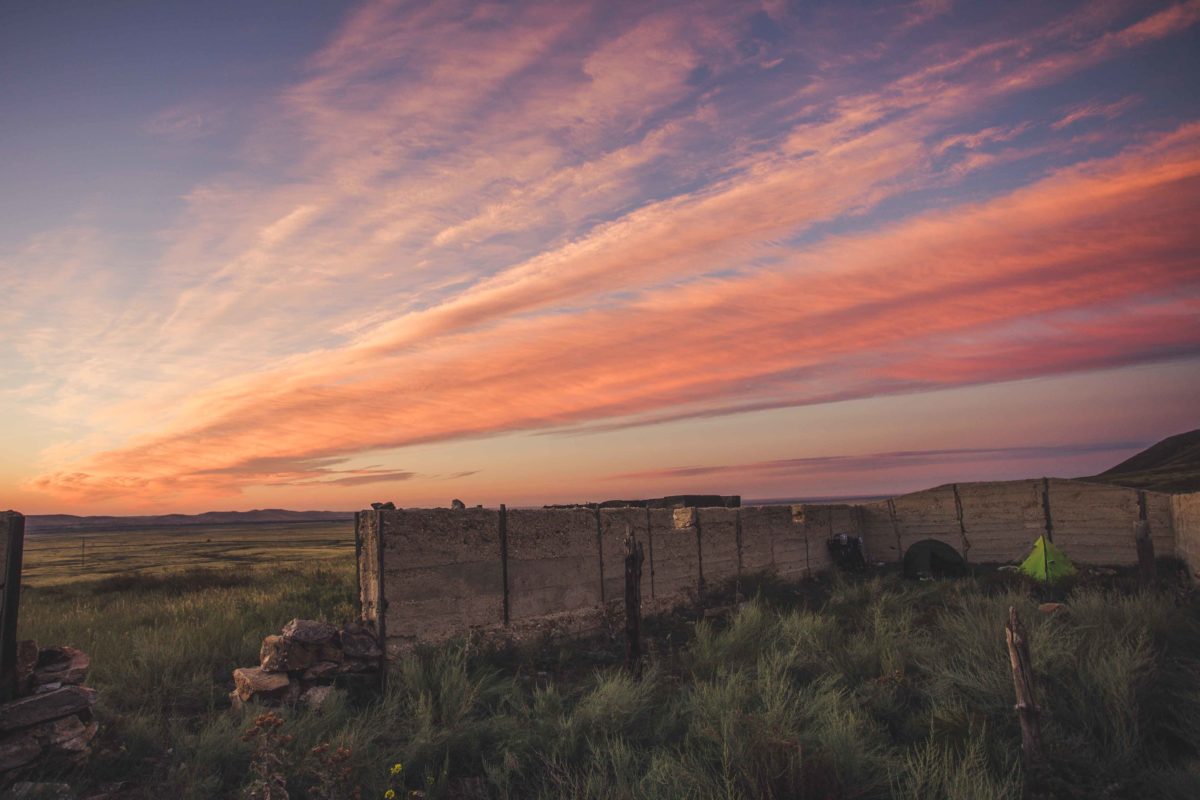 After a few more days’ desert riding and random encounter,s we’re ready to enter China. The Chinese border crossing is looming, and we’re nervous and excited about entering the wild west Xinjiang region.

It takes four and a half hours to cross the border, including some interrogation using the best voice recognition translation app I’ve ever seen. We choose our words carefully, and we’re finally done.

I later Google (like Facebook, it’s not allowed in China) why the border is so tight here. I know to the south the Uighur population are pushing for independence and terrorist attacks are frequent, but here, further north, the issue is local Kazakhs wanting to leave China and emigrate to Kazakhstan. The Chinese refuse exit visas to anyone suspected of not returning. 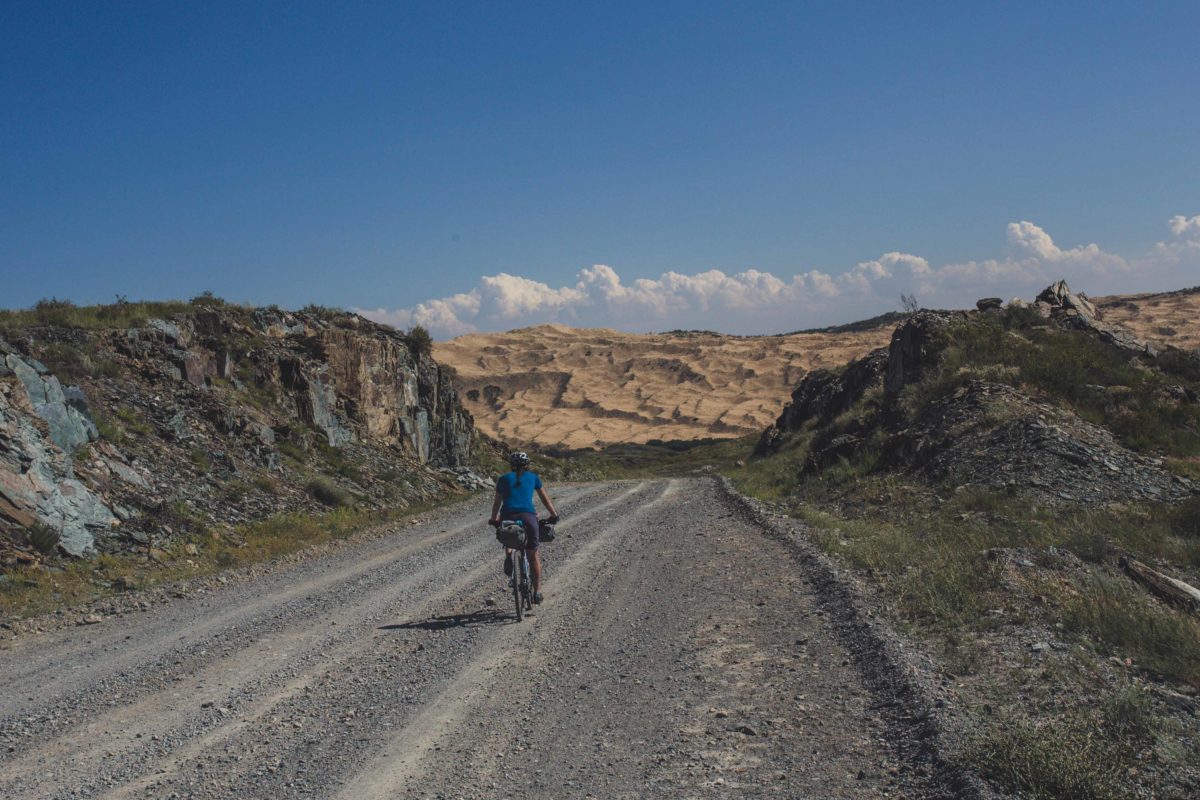 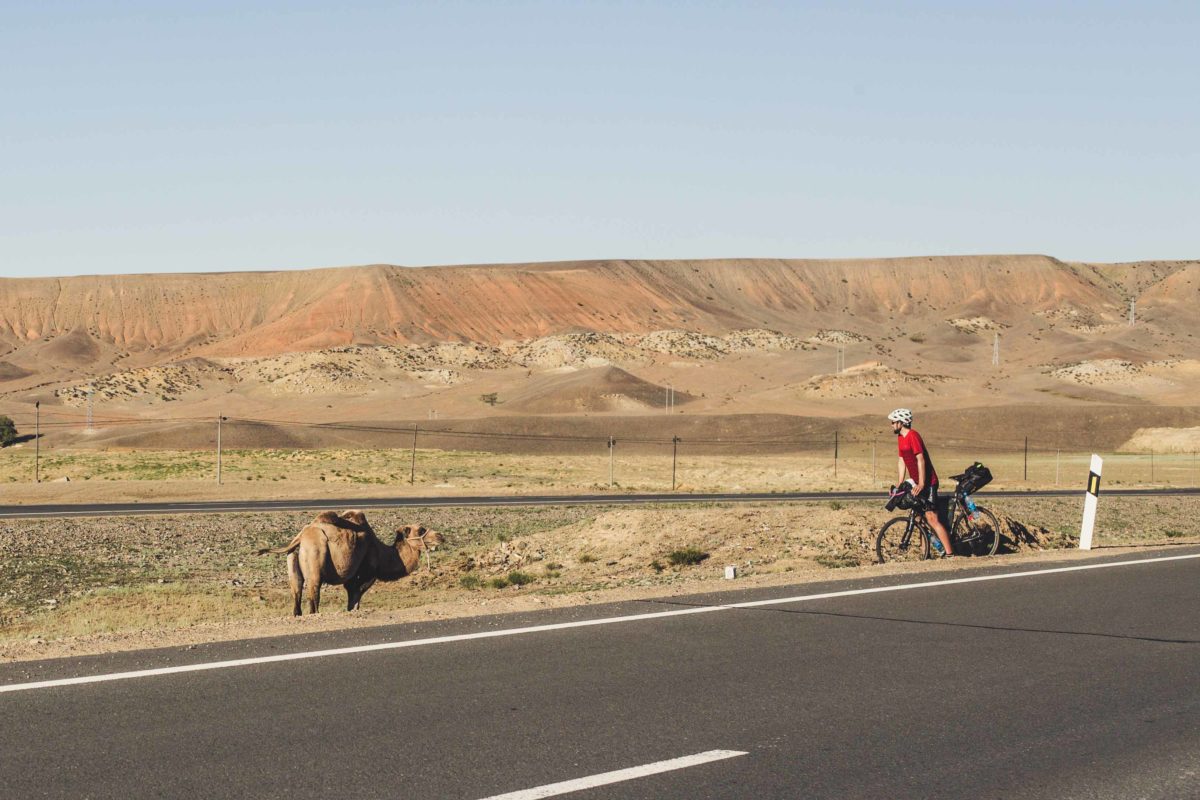 While China adds to the mix that makes this trip so unique, the riding on the windy and scorching-hot desert roads is brutal. In the oasis towns, the excellent Han Chinese food and fascinating markets help, but the hotels won’t check us in, scared by the huge police presence; others try to charge hundreds of dollars. Every day, our passport is requested and photographed by police and undercover officers maybe ten times. We make progress, and end up camping more as we try to get across the country quickly. 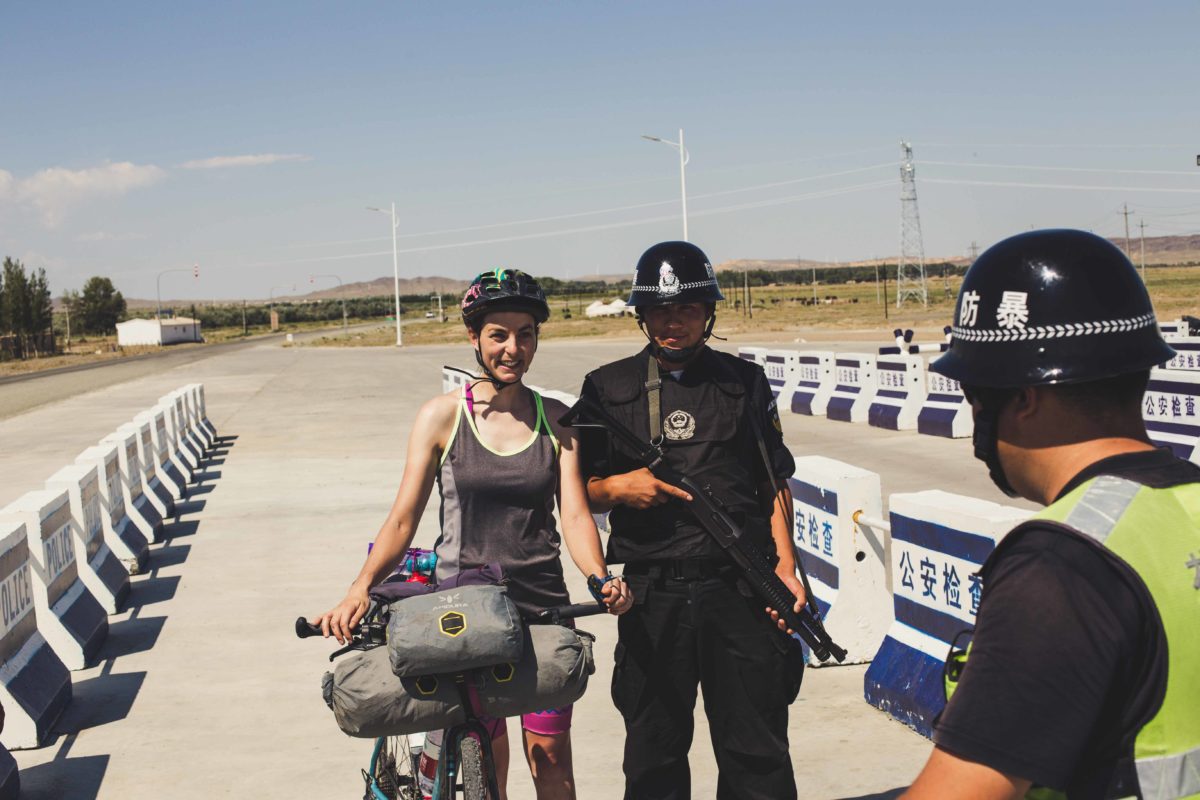 On the penultimate night in China we ride due east. Behind us, the sun sets and a light rain falls. The result is a rainbow arching over the tarmac — we’re buzzing like school kids, amazed by the surreal light. It seems China is apologising, “don’t worry: there’s better to come.” 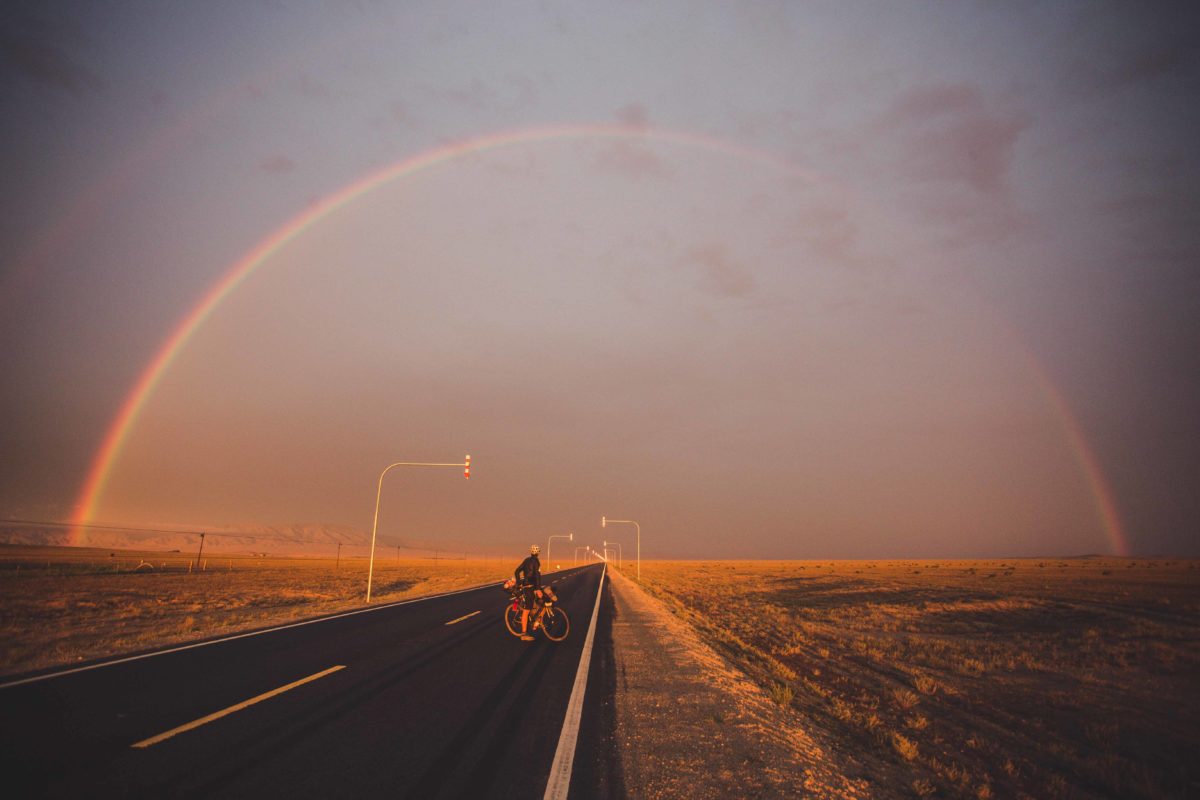 The riding is about to get interesting as we enter Mongolia. The Chinese tarmac ends, and these tracks and paths will take us north to Russia

The path is empty, the landscape is empty, and it’s intimidating — help is a long, long way away. We ride to Bulgan, the only town we’ll see for a while. Sitting in the shade, I am munching a watermelon, the leftovers being mopped up by a large cow. “Should cows eat watermelon?” Marion asks. Probably not, but there’s little else to eat here. 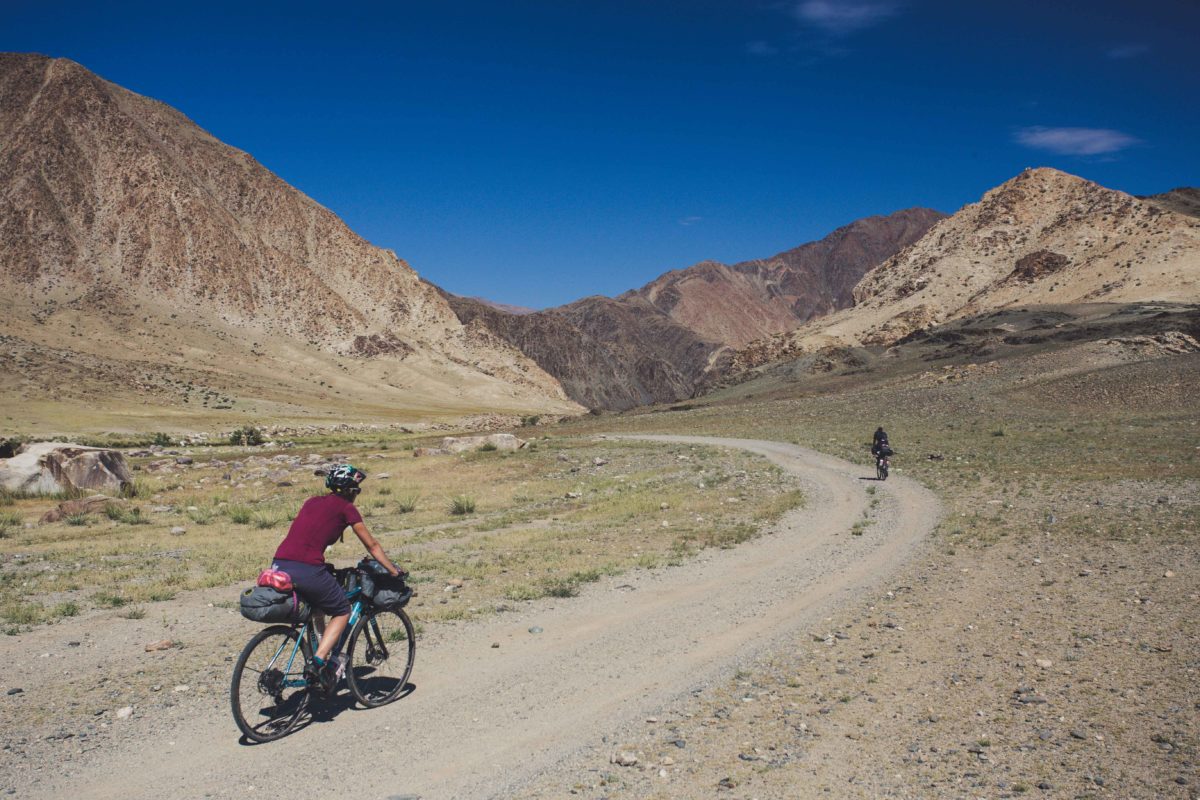 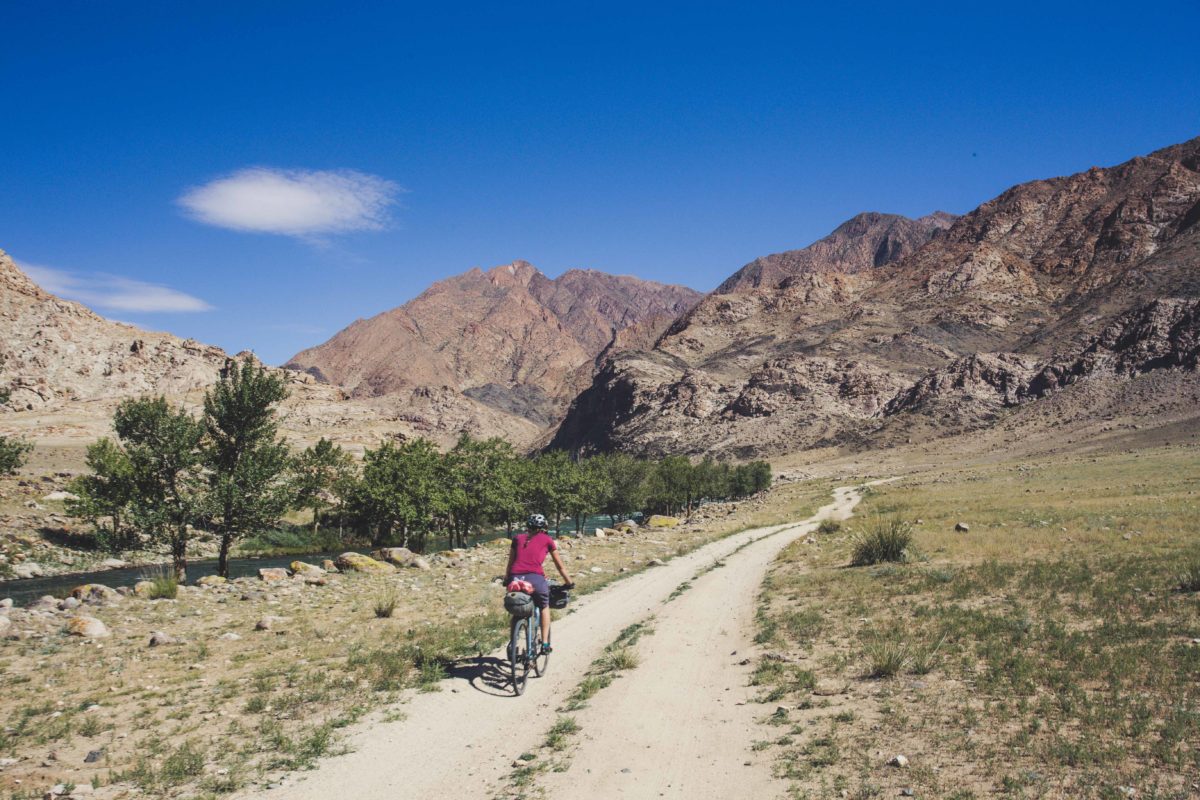 We spend the next few days on a rocky track following a river north. It’s amazing riding, as the trail rolls up and down through the narrow river valley, each meander offering up a new vista of mountains, and occasionally deserted houses. In the evening, our camp is sometimes passed by lone horse riders, but we see few people. We pass herds of Bactrian camels before stopping to bathe in the river and cook lunch in the shade of the poplar trees that line the banks. 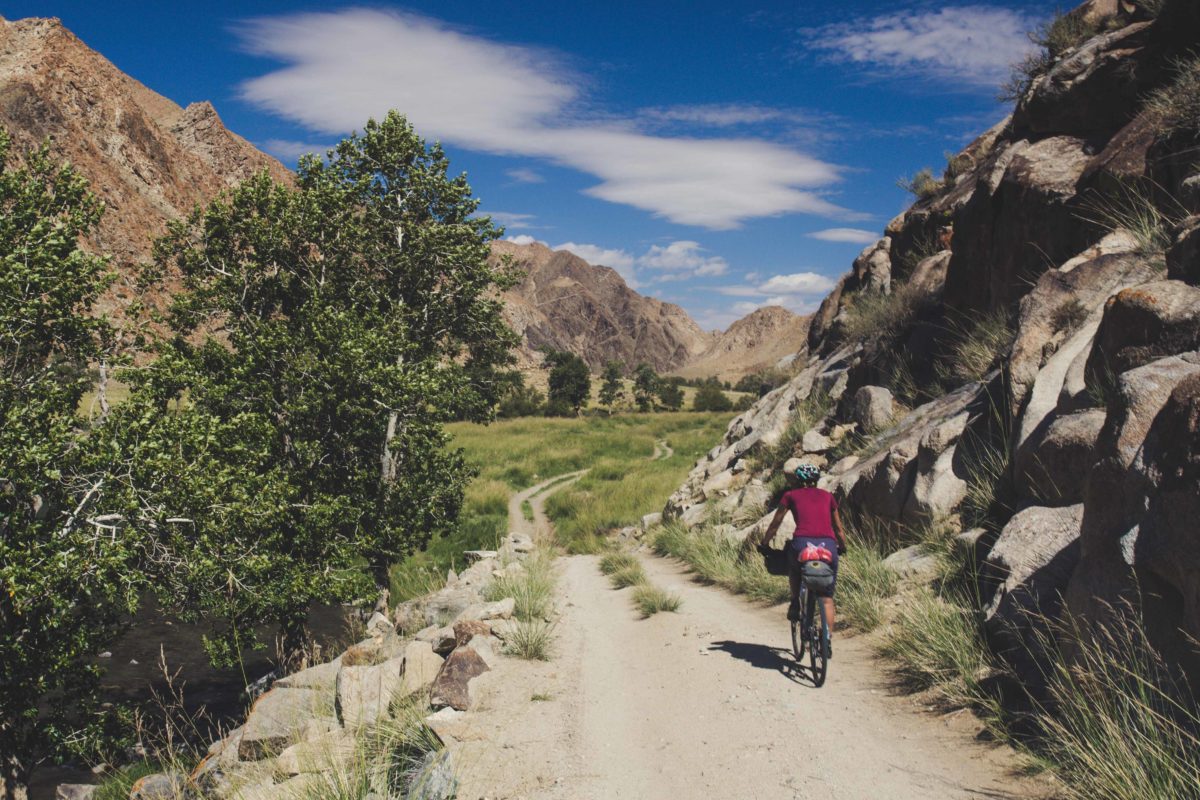 Finally, a cluster of Gers appear as the valley widens and the steppe spreads out. The herds of camels mingle with goats, and the people wave as we pass. 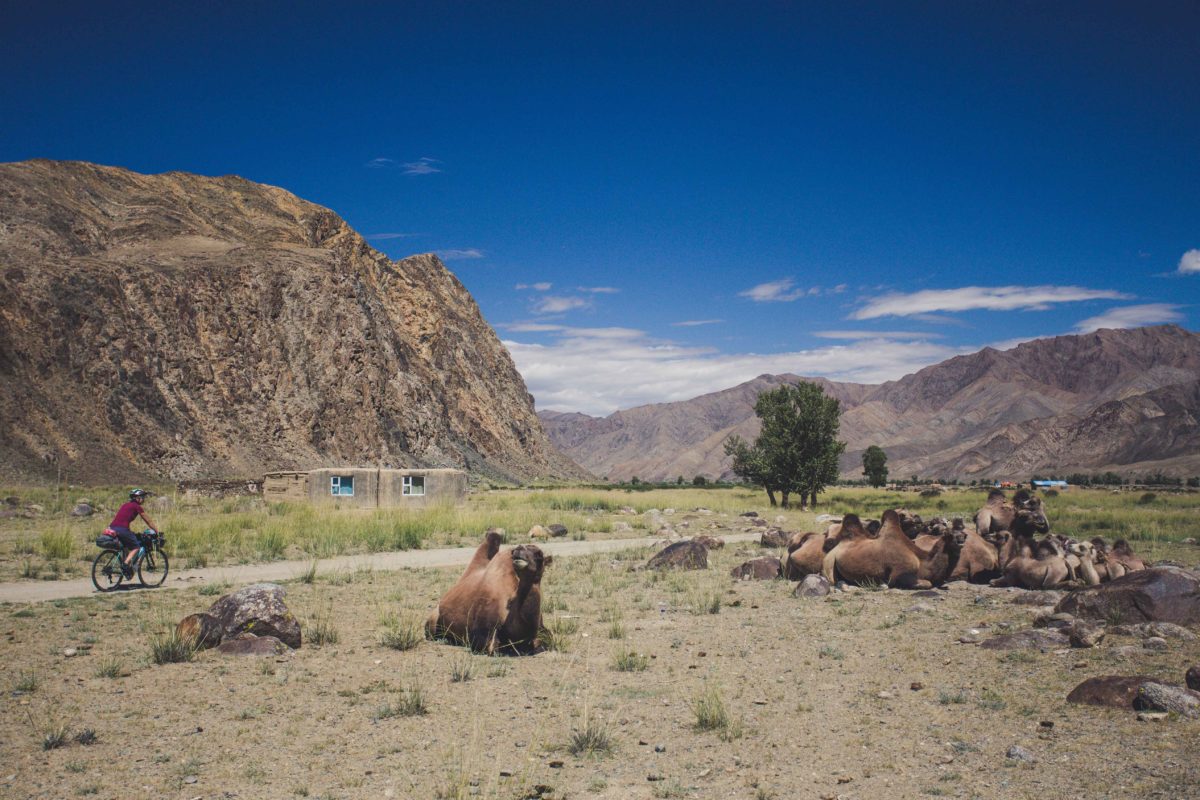 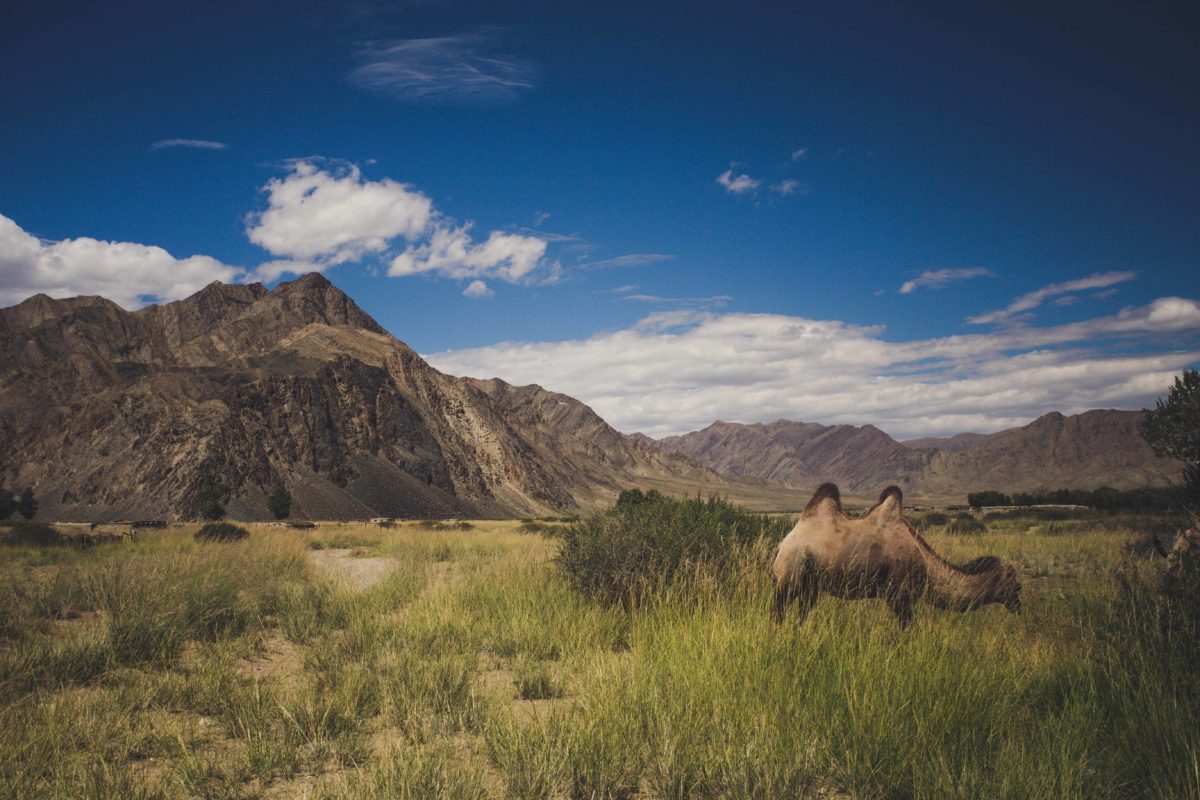 We camp by a line of four large Gers, each one home to a brother or sister from the same grandparents. Kids buzz about our tent, excited by the strange foreigners appearing on bikes. One girl has been to school in Ulaanbaatar and speaks English. She’s never seen tourists here before. We enjoy tea and tentatively, I try the seven kinds of dried cheese laid out especially for us. Each cheese varies in hardness and rancidness. Jack sticks to the fried bread, a move that we discover is sensible 24 hours later. 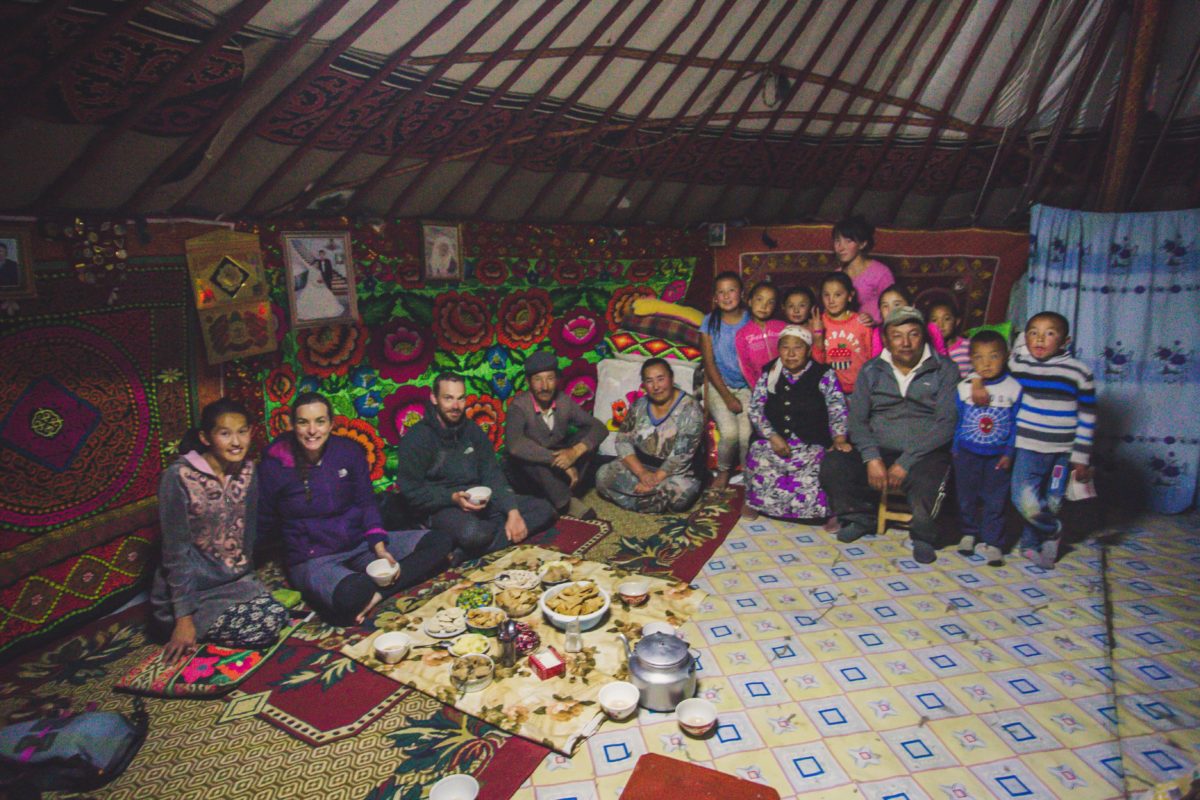 As we sleep, grunting yaks and goats are the soundtrack, the stars above us interspersed with meteors. We’ll not forget camping in Mongolia anytime soon. 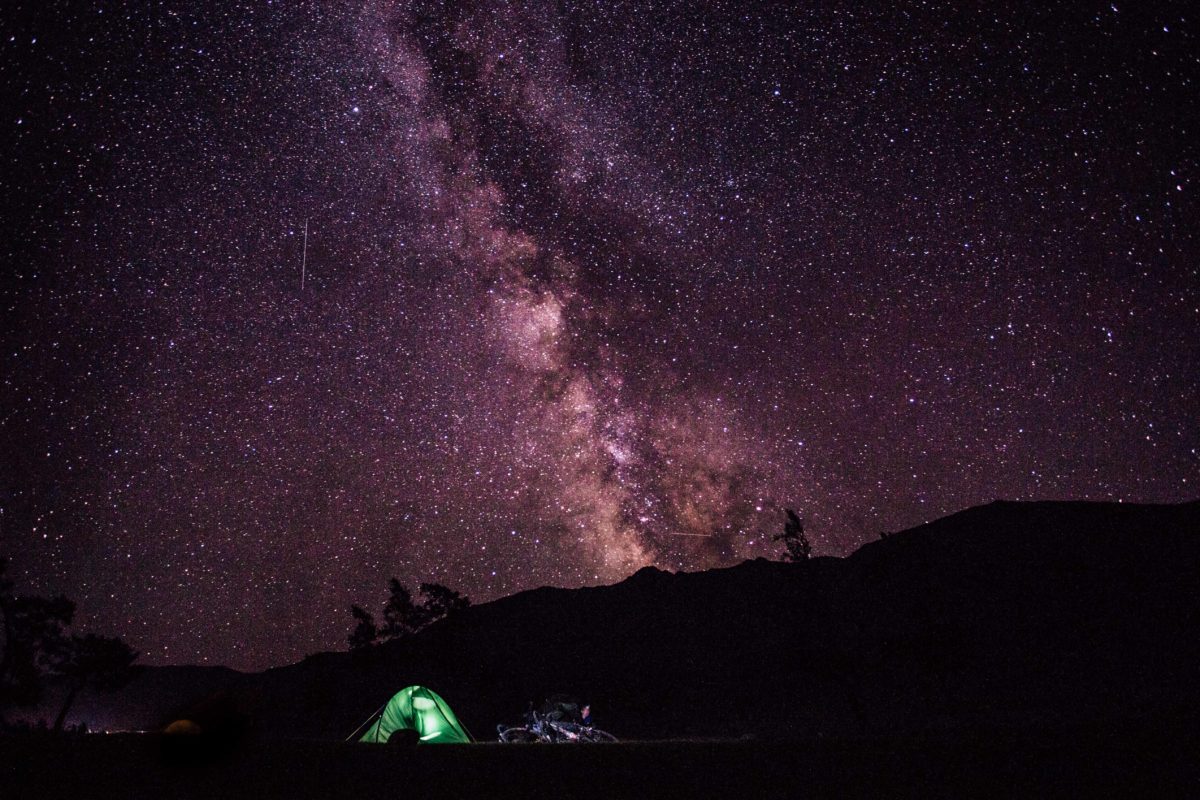 After recovering from our cheese-induced food poisoning, we are back riding on flowing singletrack created by motorbikes, headed towards the town of Ulgii. In this area, we stumble upon the renowned Kazakh eagle hunters. Outside the first Ger, we spot a Steppe eagle tethered. The host is a world-champion eagle hunter, and he proudly shows us his medals. 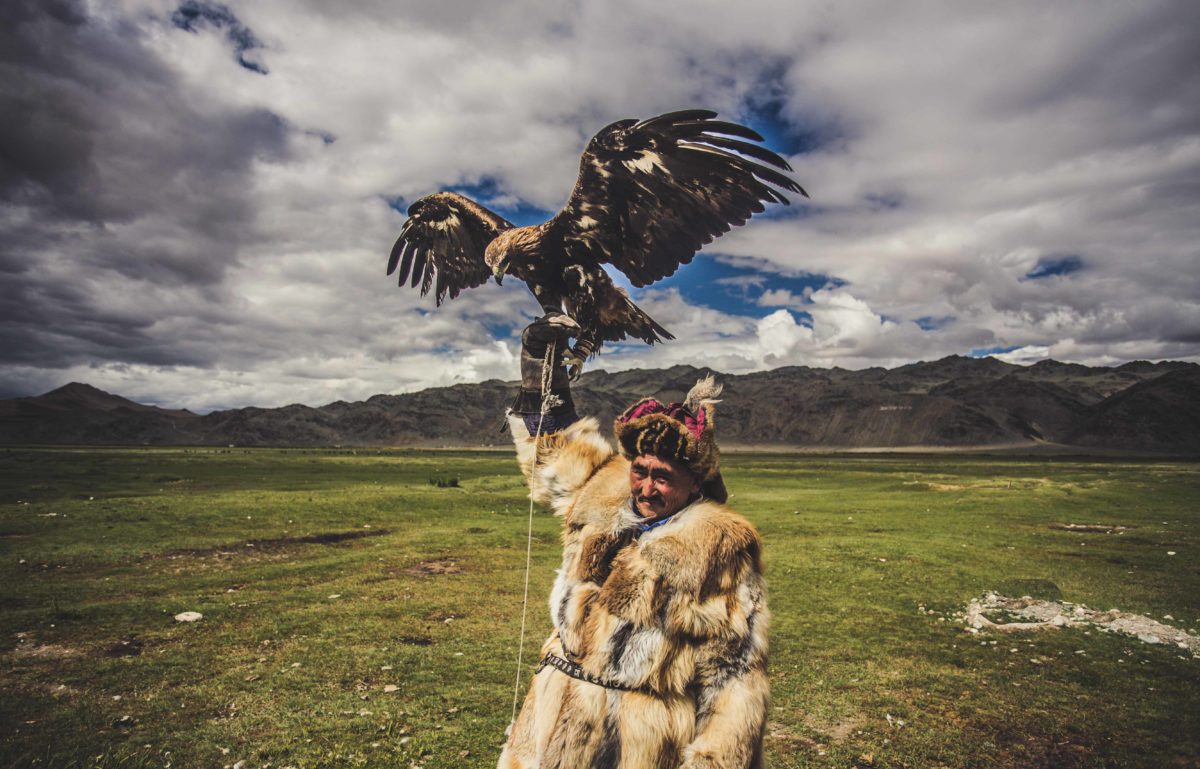 Next we spot a golden eagle, and the daughter is training with it. It’s still a vital way to get meat and furs to survive the long, cold winters on the plateau here. It’s a remarkable relationship; we can see the eagle look directly into her master’s eyes, awaiting his every command. 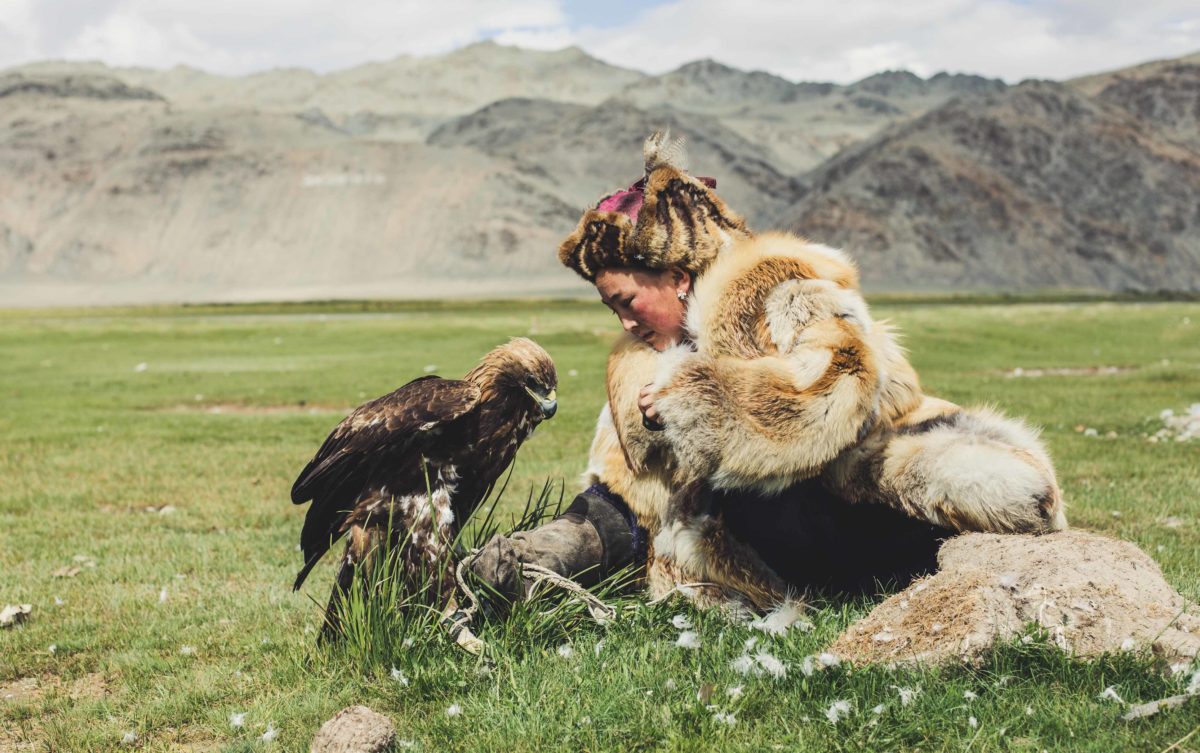 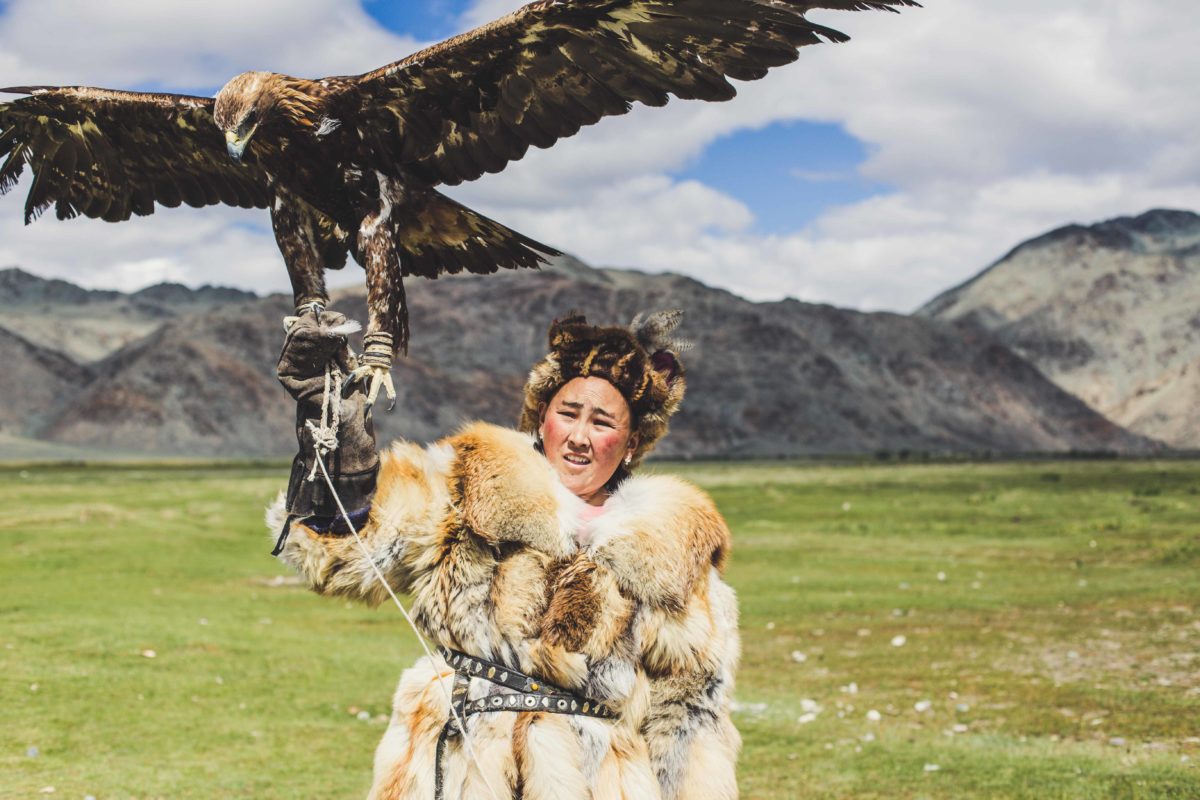 The riding is slow, as it mixes between sand and washboard dirt across the steppes. There are no roads–merely a web of tracks in any direction. 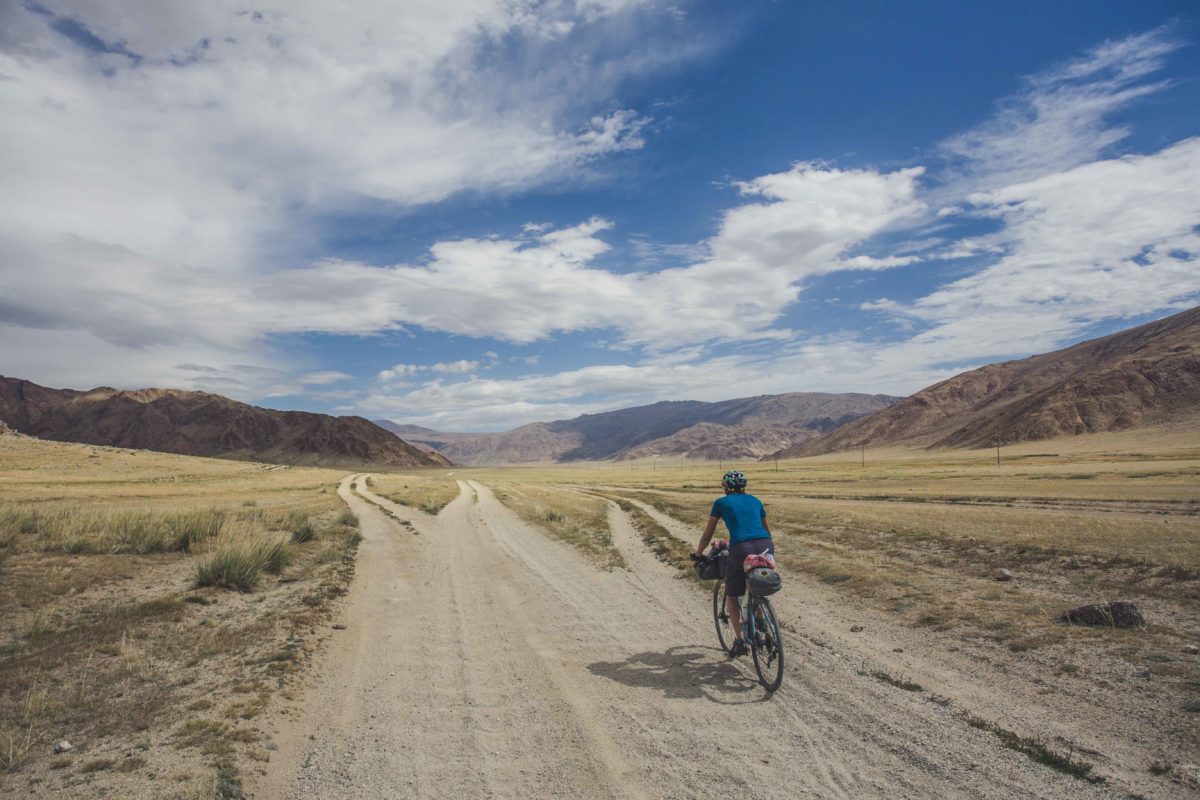 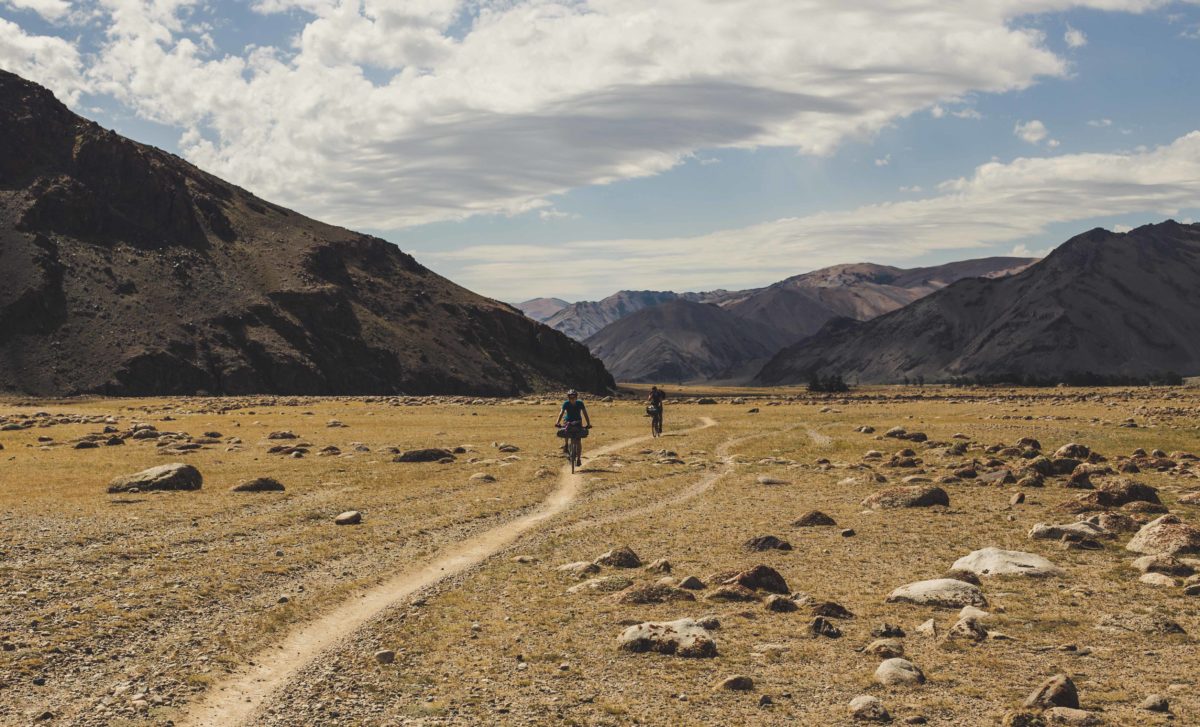 The air is now cold as we climb higher toward the border. The wind brings a light snow that chills us all. It’s bleak but beautiful, with the hilltops turning white. 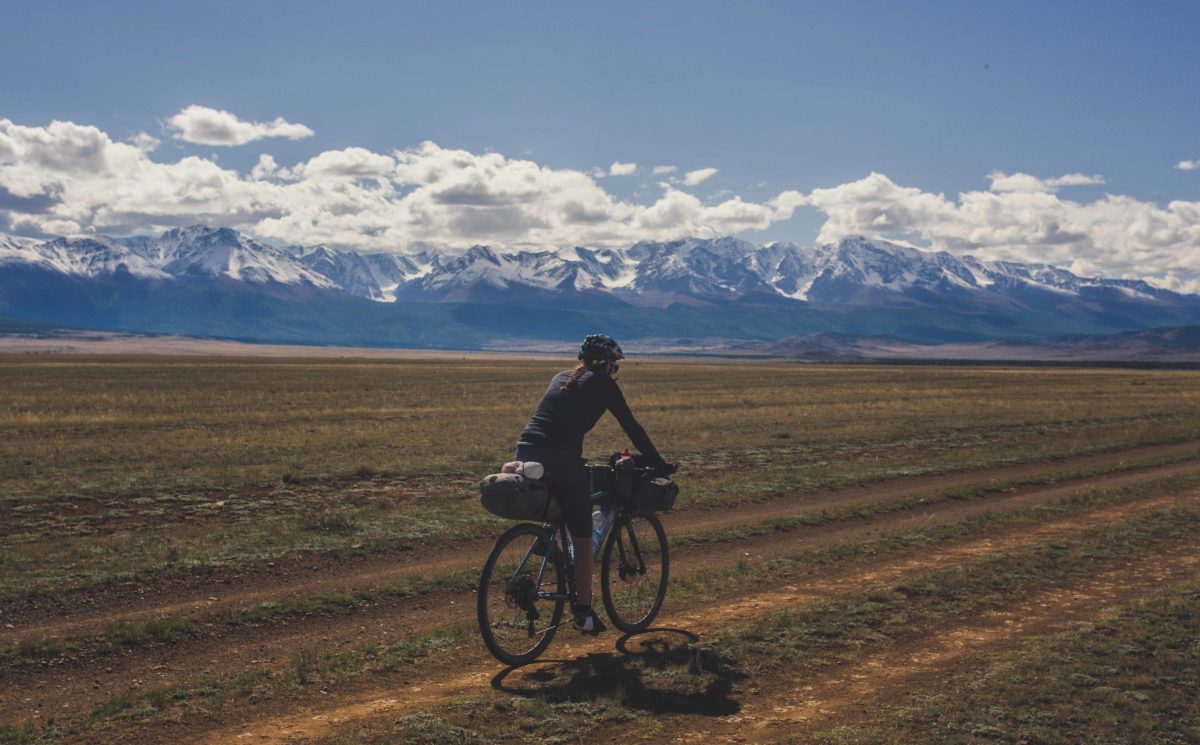 As soon as we enter Russia, the road is paved. The freezing Russian guard outside smiles and welcomes us. The first village has a cafe with coffee and fried snacks. To a hungry cyclist who’s ridden across Mongolia, it’s heaven. However, Russia feels like a let-down, like the performer following a standing ovation. It’s not for lack of trying, because the mountains are beautiful here, with pine forests framing glaciers and wooden villages that remind me of Colorado. It’s just that Mongolia was unbelievable – -those were days and stories that I’ll be telling my kids and grandkids all about. The area is opening up to tourists and will undoubtedly change, but for now, it’s unique and genuine. 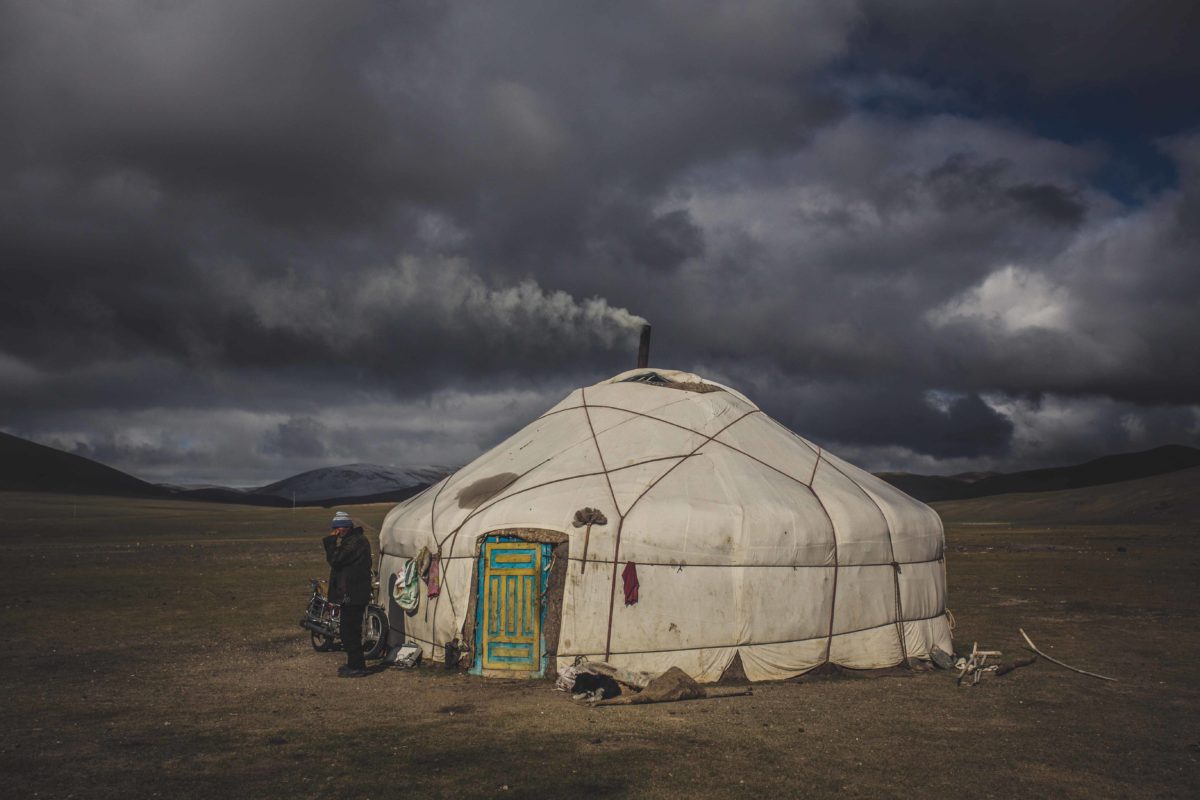 In Russia we detour onto gravel again to get deeper into the lofty Altai Mountains, but time is against us, and we’re soon out of it. In the industrial city of Altay Gornysk we enter the supermarket, and they have draught beer on tap: we fill our water bottles, put them in their cages, and later celebrate — we’ll fly to Moscow tomorrow. What a journey and what a ride! 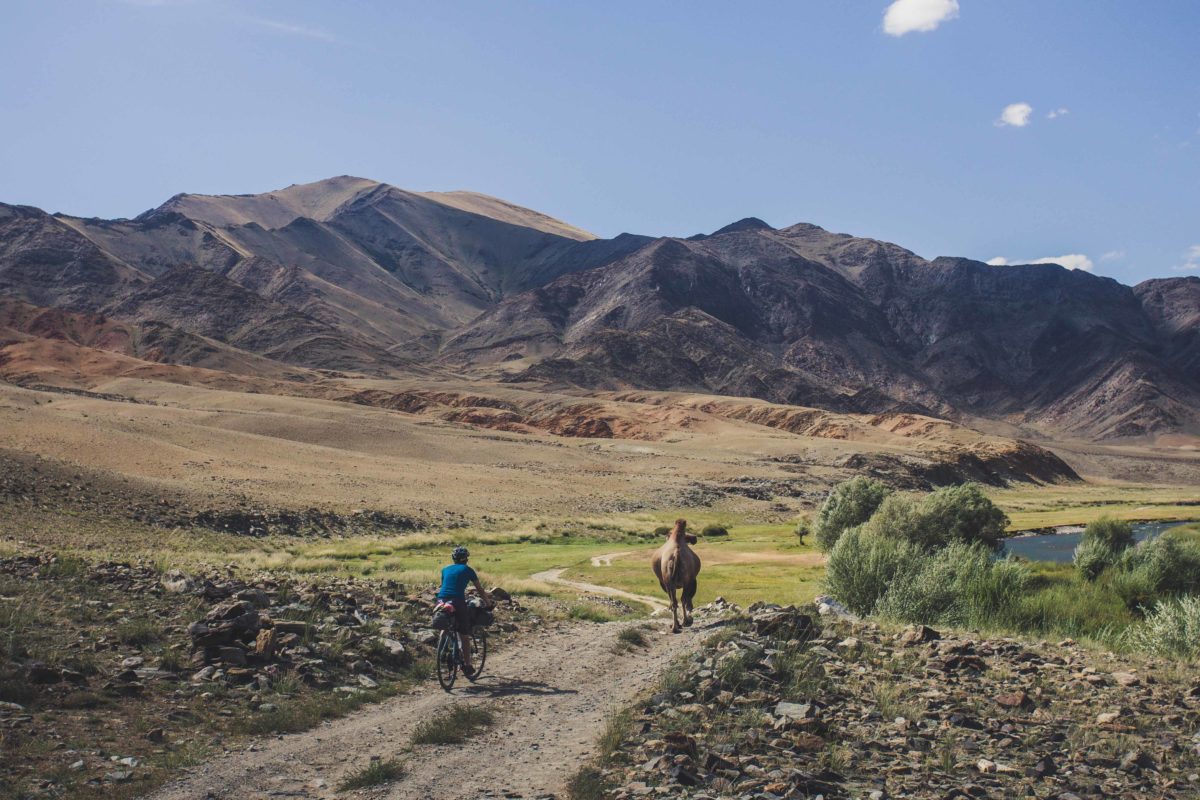 What an incredible adventure! While I’ve heard such great things about these mountains before, this photo journal really made the Altai mountain range and the cultures living there really come alive in my imagination. Loved it!

Thanks Greg! It was an amazing experience and only really possible to explore the region by bike making it more special!