A couple weeks ago we wrote about the Global Conservation Mountain Bike Club‘s collection of exotic singletrack trails around the world and that got us thinking: where can we find our own unusual, exotic locations to ride? Here are six trails every mountain biker should consider adding to their exotic singletrack punch card – no membership required! 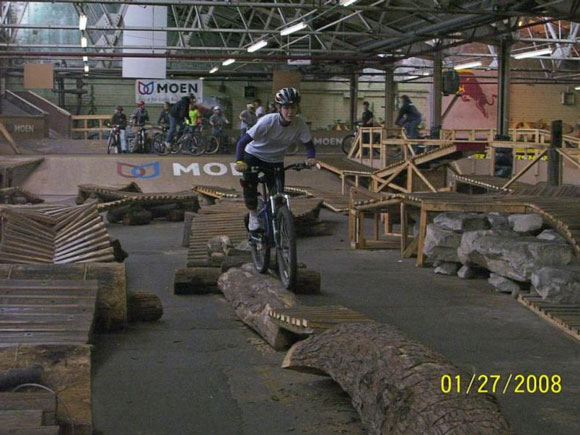 By now you’ve heard of Ray’s Indoor MTB parks but I imagine there are still a lot of us who haven’t had a chance to mountain bike indoors (myself included). Ray has two locations now – one in Cleveland and another in Milwaukee – and similar indoor parks are popping up everywhere, from Toronto to Boulder toPortland. Unlike the mountain bike trails you’re used to riding, every inch of an indoor park is manmade and purpose-built for shredding.

In a similar vein, there are a few mountain bike trails out there that actually go through buildings. Arrowhead is a trail near me that goes through a barn and there’s another “secret” trail I know of that’s routed through an abandoned home. Still, if riding indoors is like bagging a rare tiger, riding through a building is only the equivalent of shooting a buck. 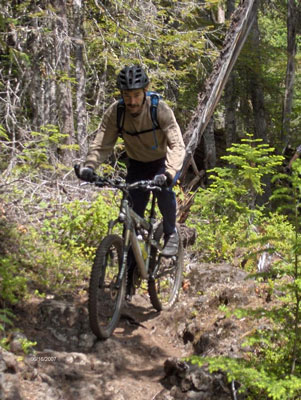 Have you ever ridden through a lava field? Me neither, but I want to try it! Lava flows can produce some crazy shapes and textures and the porous stuff can be really gnarly to fall on. The McKenzie River Trail in Oregon features about 10 miles of difficult lava field riding – and some of the most incredible scenery you can imagine.

Hawaii boasts some of the most active lava fields in the US but as far as I know these are in National Park areas that are closed to bikes. Red hot, steaming lava surrounding the trail would definitely get me going faster. 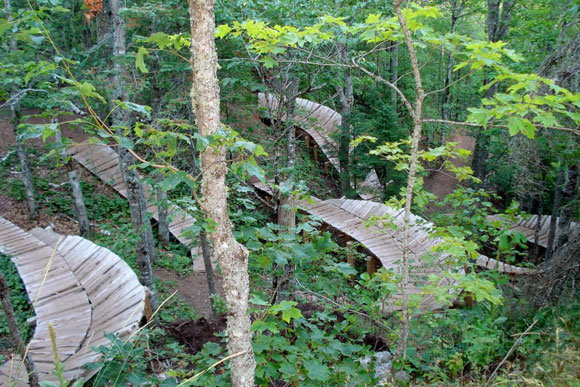 Most mountain bike trails tend to stick to the ground but a few special trails take to the skies via air bridges and ladders. Copper Harbor in Michigan seems to have more than its fair share of wooden bridges, keeping bikers’ wheels out of the dirt and on the wood. 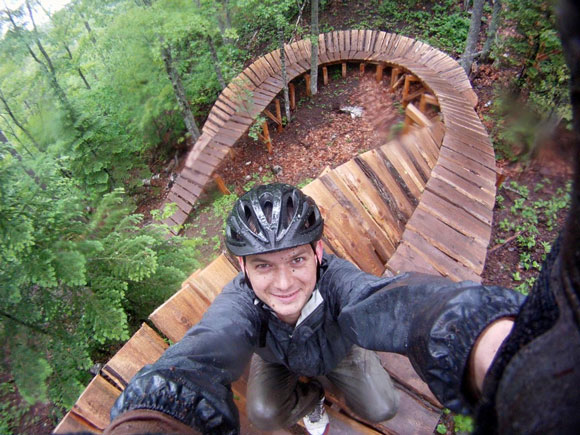 Large wooden trail structures are rare for a number of reasons, not the least of which are liability considerations. There’s also the time and cost for construction and the fact that these things wear out over time and need to be replaced or rebuilt. IMBA trail builders shy away from wooden structures mainly due to this last consideration so many of the most “built up” trails are located on private land (like the Hurricane Creek trails in Alabama shown below). 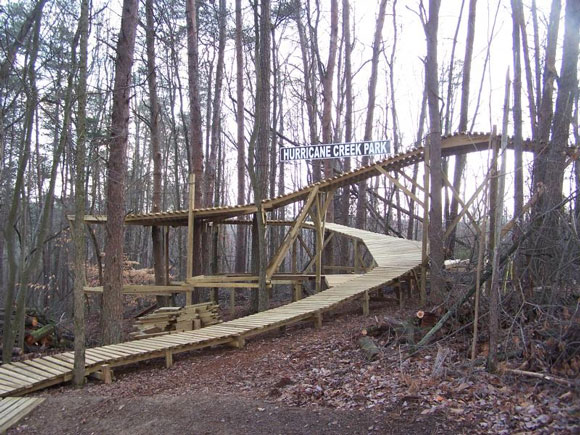 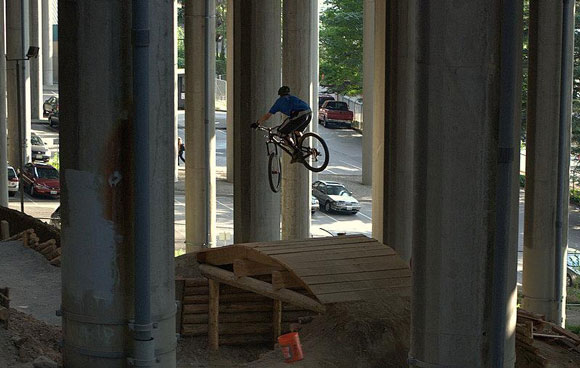 There aren’t a ton of legitimate, urban mountain bike trail systems in the US but things are changing. The I-5 Collonade project in Seattle a few years back wedged about a mile of progressive skills tracks underneath an interstate overpass for a one-of-a-kind MTB experience. Designers packed a tight system together featuring a pump track and lines rated beginner to advanced.

Highbridge in Manhattan features about 3 miles of surprisingly technical singletrack and a pump track. Who would’ve thought you could ride a mountain bike (on dirt trails) in NYC? The real estate value of this trail alone is out of reach of most billionaires. 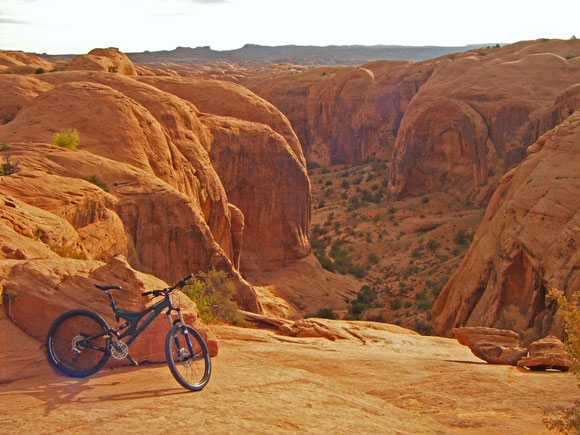 Everyone’s heard of the Slickrock trail in Moab but unless you’ve ridden it, you may not understand why it’s so well known. Sure, Slickrock is a fun and challenging trail but the real draw is the unusual riding surface and namesake for the trail. Imagine taking a boulder field with rocks as big as houses and buildings – and paving over everything with asphalt. The pitches are steep but the riding is smooth and grippy, sorta like riding a really technical and challenging road.

After riding Slickrock, many mountain bikers compare it to riding on the moon which I imagine isn’t too far off (except the reduced gravity bit). There really isn’t anywhere else like Slickrock, though you can find bits and pieces of smooth rock riding at places like Dupont State Forest in North Carolina. 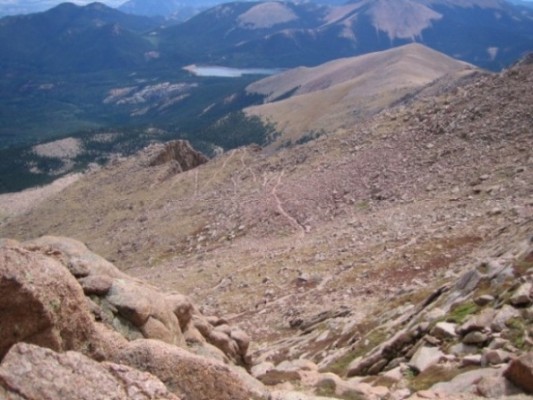 Ever wonder what it would be like to ride your mountain bike at 14,000 feet above sea level? Tough. The Barr trail in Colorado Springs starts at around 7,000 feet and climbs to the top of Pikes Peak at 14,110 feet above sea level over 13 miles. While it would *technically* be possible to ride to the top since the trail goes the whole way up, expect extreme hike-a-bike near the summit. Unfortunately the Barr trail is mega-popular with hikers so don’t expect a bombing descent either. Still, riding so far above tree-line is unusual and it’s not for the faint of heart.

Ok, now it’s your turn. Which exotic singletrack trails are you hoping to bag this year?

Gear
Get Away from It All with These Bikepacking Picks
Gear
New Devinci Spartan Adds High Pivot and Size-Specific Chainstays
Community
Middle and High School Mountain Bike Racing Season is Back!
Community
Rooted Vermont: Business Up Front, Party in the Back—And All...
Subscribe
Login
Please login to comment
11 Comments
Most Voted
Newest Oldest
Inline Feedbacks
View all comments

I’ve ridden the “Air Rides” section shown for Copper Harbor and the trail in/around this area is simply amazing. I am looking forward to a trip up there this coming fall if time allows.

There’s also trail similar to the “Lava Fields” above in Minnesota in the Duluth area. Piedmont (http://www.singletracks.com/bike-trails/piedmont.html) is mostly exposed lava flows that can really do a number on ones tires if you don’t watch where you’re going. I’ve seen many shreaded sidewalls here.

Another similarly unique trail system in MN is Cuyuna, built up on tailings from mining iron ore in Northern Minnesota (http://www.singletracks.com/bike-trails/cuyuna-lakes.html). If you fall, you’re almost sure to get at least a scrape, but almost everything is rideable by everyone.

I think I would put Kokopelli trail from Fruita to Moab into this category.

With Slickrock, sweeping vistas, creekside camping, climbing up into 11,000 foot mountains, and ending in the iconic Moab … I can’t wait to do it!

Also White Rim, for the aspect of riding up (or down) a freakin cliff!

I’m not familiar with Sylvan Island but it sounds interesting…

Not mt bike related but many cities have great outdoor activities if you only know where to look. One of my wife’s and mine favorite get away vacations was camping out on the Boston Harbor Islands. Four miles from downtown via ferry will bring you to a series of islands great for hiking and beach side camping. http://www.bostonharborislands.org/

Went to bed thinking about the question, didn’t take long for the answer- White Mesa just north of Albuguerque, NM. Not only are you riding on gypsum (the same stuff the walls in most homes are made of), but actualy get to ride through geological active areas.

Wonder if the steel mills at Sylvan Island ever processed ore from the iron mines at Cuyuna? Would be an interesting connection.

Cool write up. Thanks. There were a couple on the list I had never heard of. Thanks for adding to my list!

Cuyuna and Piedmont are on my list since last year – can’t wait till it’s dry.
And I’ll add to the list of Exotic Mah Daah Hey trail, which is claimed to be the longest (96 miles) continues singletrack in US. This one is a must for me coming summer.

I would seriously love to do http://www.singletracks.com/bike-trails/marys-loop-horsethief-bench.html And I have a Salsa Horse thief on my wish list for riding it.