It started like the opening scene to a mountain bike movie: in the predawn hours, sleepy cyclists roll out of bed to screeching alarms and pre-packed bags, signaling the anticipation of an epic ride. The sun races to greet them at the horizon line by the time they hit Interstate 5. It’s rare that any trip follows this kind of trajectory for an entire day, but for myself and my copilot, pro skater Mark Partain, this Cinderella story is packed to the brim with stoke and chance encounters from start to finish.

I left all of my video and camera gear at home in favor of a kitchen-variety arsenal: your Mom’s Nikon D40, standard issue with a 55-200 lens, and a GoPro–a camelbackable setup I didn’t have to worry about too much should I eat shit sending it down Bachelor. This camera combo has been dominating Costco end caps since the dawn of the superstore, so chances are you (or your parents) have one of these little DSLRs tucked away somewhere. 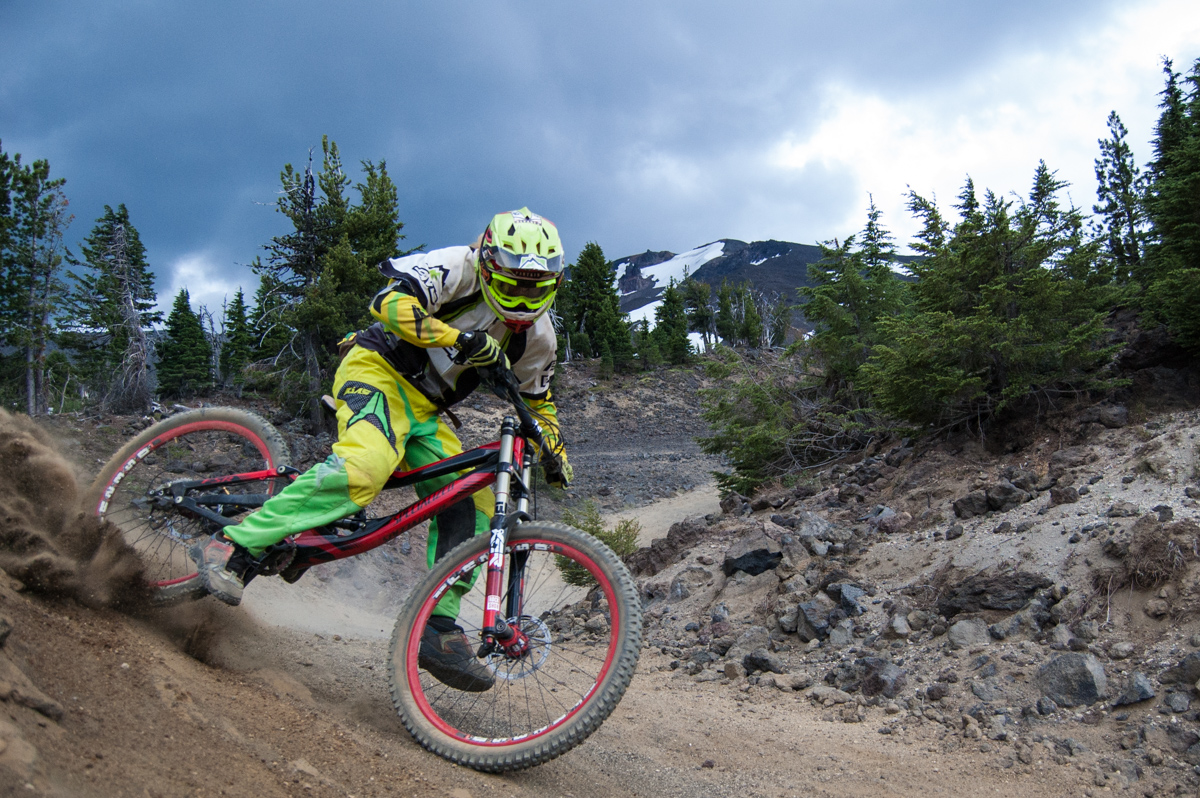 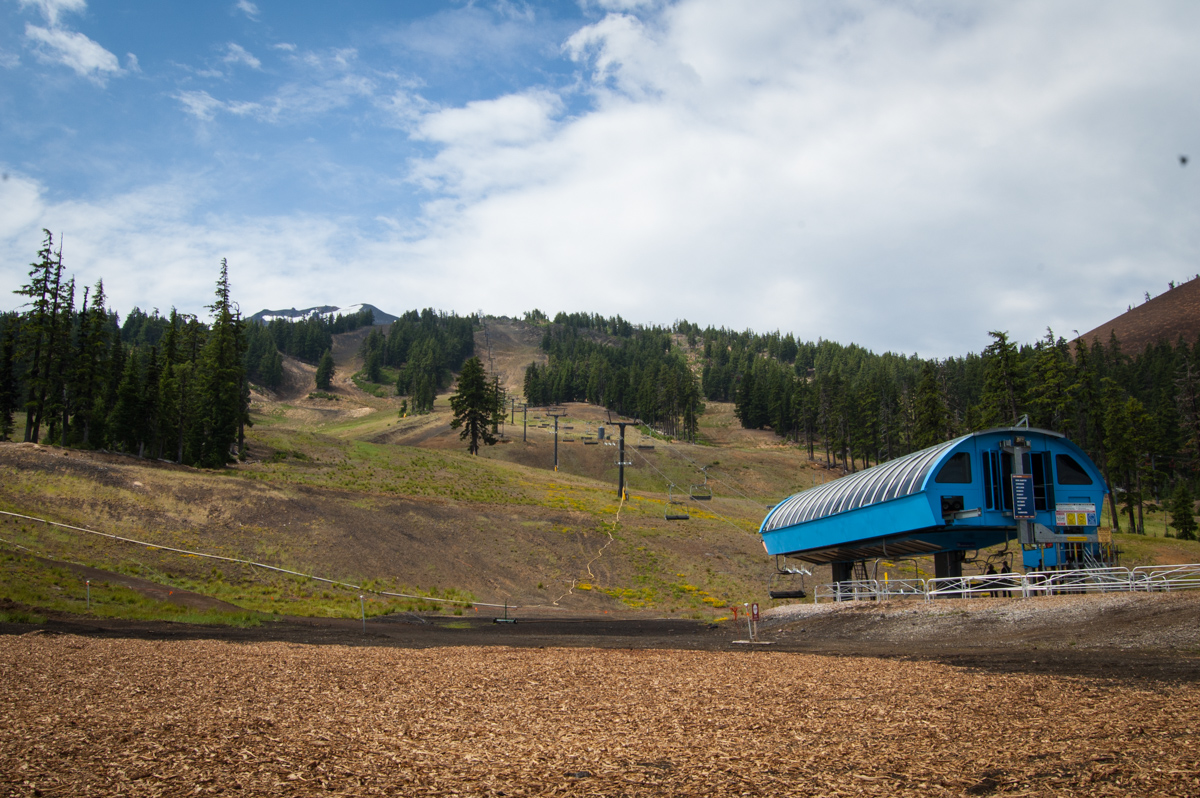 Push It for the Paparazzi

Every crew needs to have a documentarian. It’s how we relive the trip over beers, impress chicks on Instagram, and push ourselves in the moment to boost bigger or whip a little harder. “Run what ya brung” is always better than leaving empty-handed without any proof of the mission, so I brought the tools most likely available to most readers out there. Having a camera on hand is way more important than which camera you have in hand. Sure, the autofocus probably lags and the 3 focus points aren’t ideal for scoring the shot, so instead get off your bike and look at the scene: How would a photographer for Singletracks or Bike Magazine shoot this? 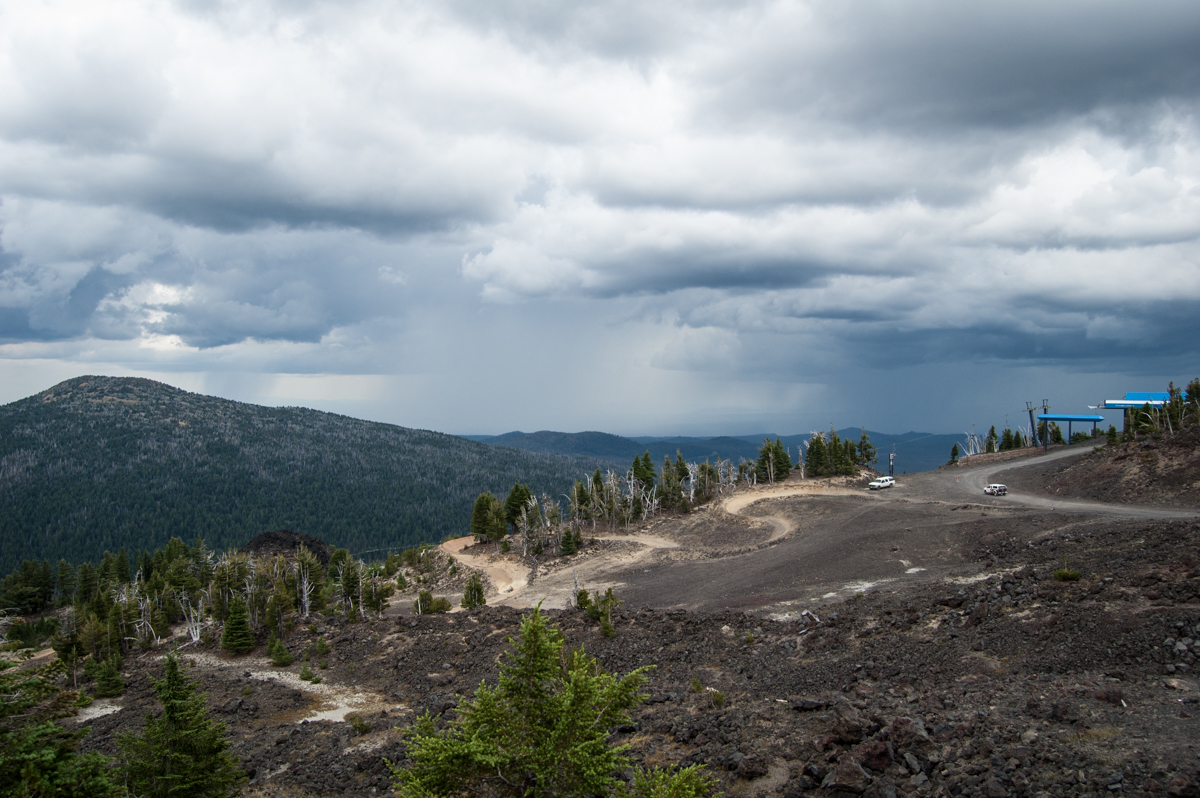 Set the scene, wait for your buddy to rip through, and “CLICK” — hit the shutter at the perfect moment. Chances are you won’t have rapid fire sequence speeds on hand, so rely on your timing instead of your tech to get the job done. If autofocus isn’t working for you, switch it to manual, setup the shot ahead of time, and wait for the action to enter the frame.

For us, this Mt. Bachelor mission was as impromptu as they come: the bike park had just opened on the July 4th weekend, boasting a bevy of new trails and features for the 2015 season. Flowy dozer runs and rocky enduro chutes are the hallmarks of the area. Spanning two lifts and a dozen trails, you’d be hard-pressed to ride the entire place in a single visit. The liftie working the Pine Marten lift recommended we check out Lava Flow: “Our signature flow trail, Lava Flow is a wide and long machine-built trail that begins in the lava rock and transitions into the dense hemlock forest. Jumps are placed and built so that riders can get air or roll over them.” 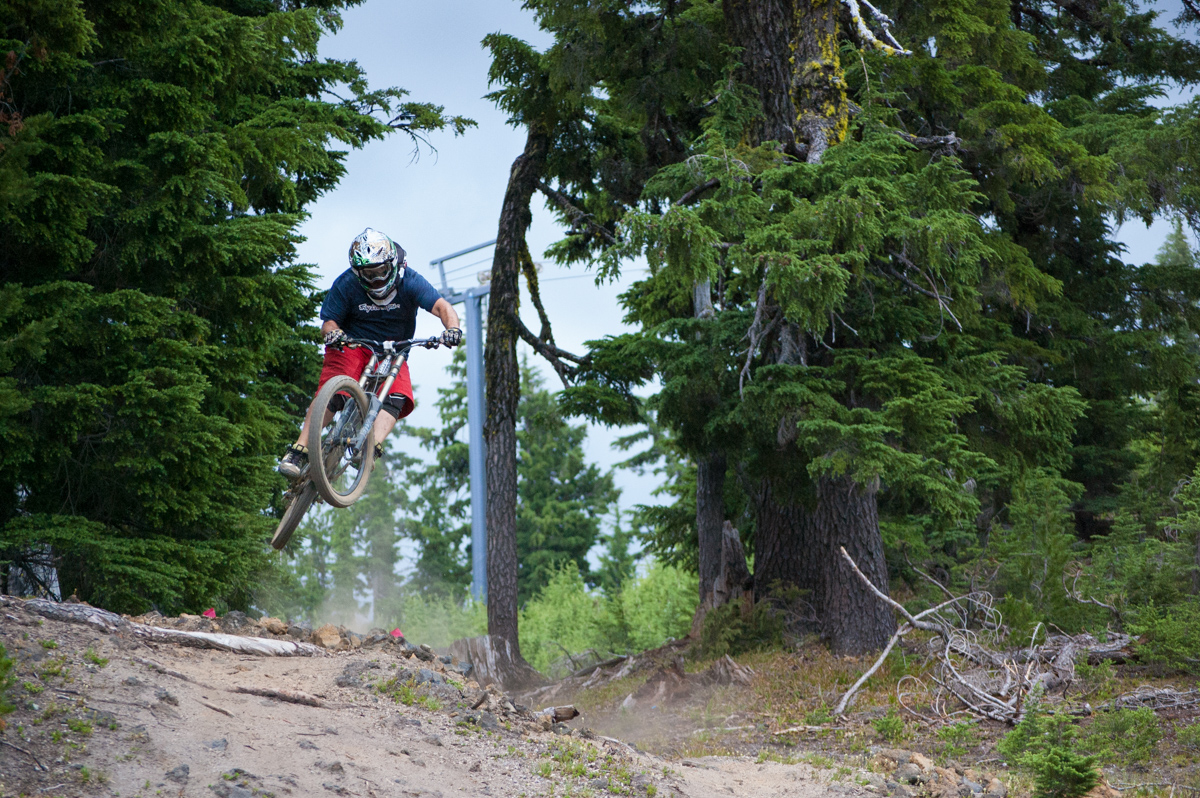 Translation: “Make like a rock, and roll: the faster the better on this trail!”

The jumps are mellow but progressive, and the trail pays dividends when you stay off the brakes and keep your momentum up. Follow the “flow” to the bottom on run #1, but stay left at the break to follow Cone Run across the mountain if you want to step up your tech a bit and send it over some fun root drops.

With some weather inbound we posted up in the skills park at the bottom, working a couple of pier drops and a fun little jump section that snaked down the bunny hill in winter configuration. There were a few of us there but it was by no means packed, including one Aussie who gave us the stink eye (so we thought) when we first rolled up. “What’s that dude’s problem?” I asked Partain, who agreed the guy was mean-muggin’ us. Well, we were wrong: that guy was Simon Elsted, a retired Australian DH racer and an instructor at Mt. Bachelor Bike Park.

We discovered (through our search for a shreddable mini-ramp) that Simon has two boys, who are best friends with two of Partain’s prodigy skate students from Hood River. Partain was the Fitzsimons’ live-in skate coach for half-a-decade… we had to laugh at the sheer synchronicity of the situation. A moto journalist (me), a 50-year old pro skater (Partain) and a retired Aussie racer (Simon Elston) randomly crossed paths at the base of Mt Bachelor, spanning continents and decades only to intersect right there. 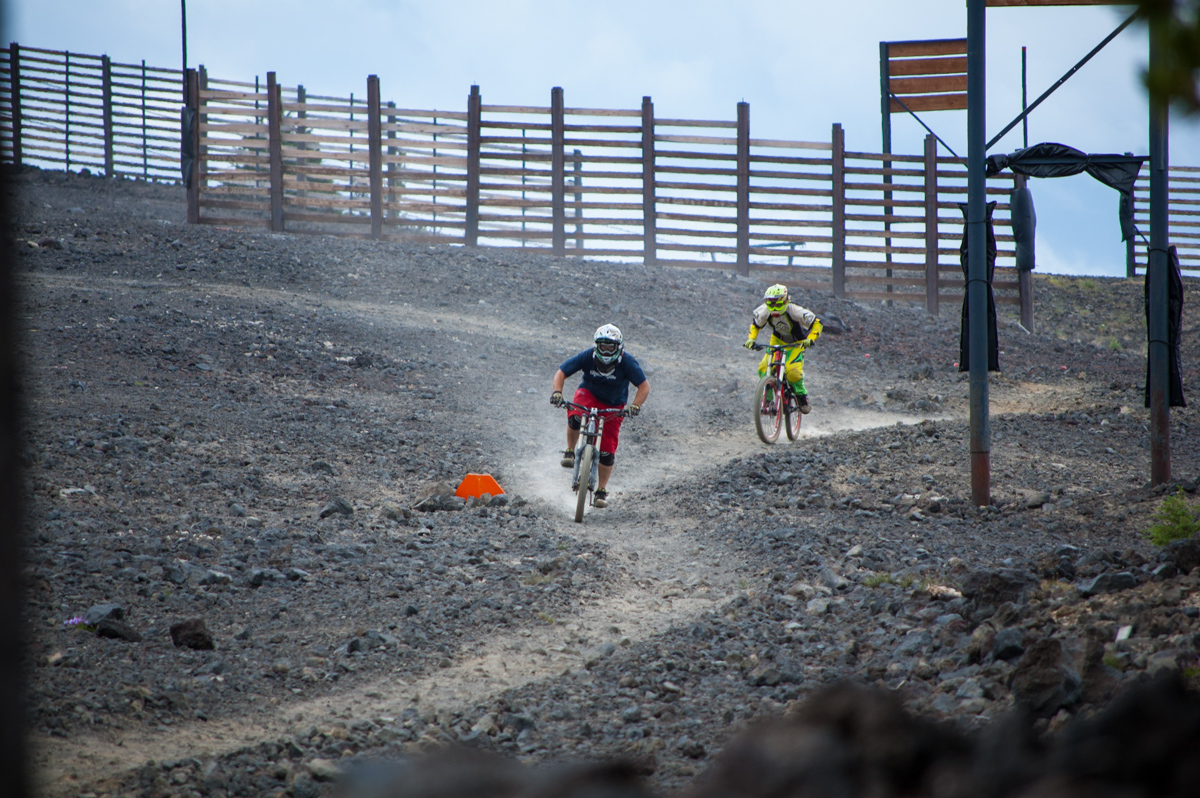 Two hours later, we were following Simon deep into the woods to a local spot called “Whoops,” part of the Phil’s Area trail network. The perfect endcap to a 16-hour marathon day, the fire road climb up Whoops is steady and reasonably easy for the tremendous payback at the top. Lower Whoops is long and flowy, every corner cupped by a fast berm and usually followed by a jump. Most were easy tables and doubles with a few booter lines to send it out into the flats. Simon had this trail dialed–sitting back in the pocket and letting the bike do the work, he was all flow from top to bottom and it was hard to keep on him! He claims superior technique… we still argue it’s local knowledge that let him grease us like that 🙂

Local Tip: The Entrada Lodge is located about 15 minutes down the mountain from Bachelor and just down the road from Bend. It’s also directly across the street from a trailhead to the legendary jump lines at The Lair. Don’t miss it… I did, and regret not looking it up sooner!

Soreness and some quick bike work began Day 2 as we prepped to head back to Bachelor. Going back through our first day, we realized there was a lot more mountain to cover! Our new friend Simon playing tour guide, we sent it back up to the lava fields, dropping in through Lava Flow en route to Rattlesnake. This trail was faster, rougher, and more technical than the smooth flow of its blue-diamond feeder. More than a few blind, root-hopping ridges drop into a variety of square-edged chop and chutes that reward the rider for good line choice. Spot the switchbacks ahead and choose your lines wisely–losing your speed on this trail sucks! 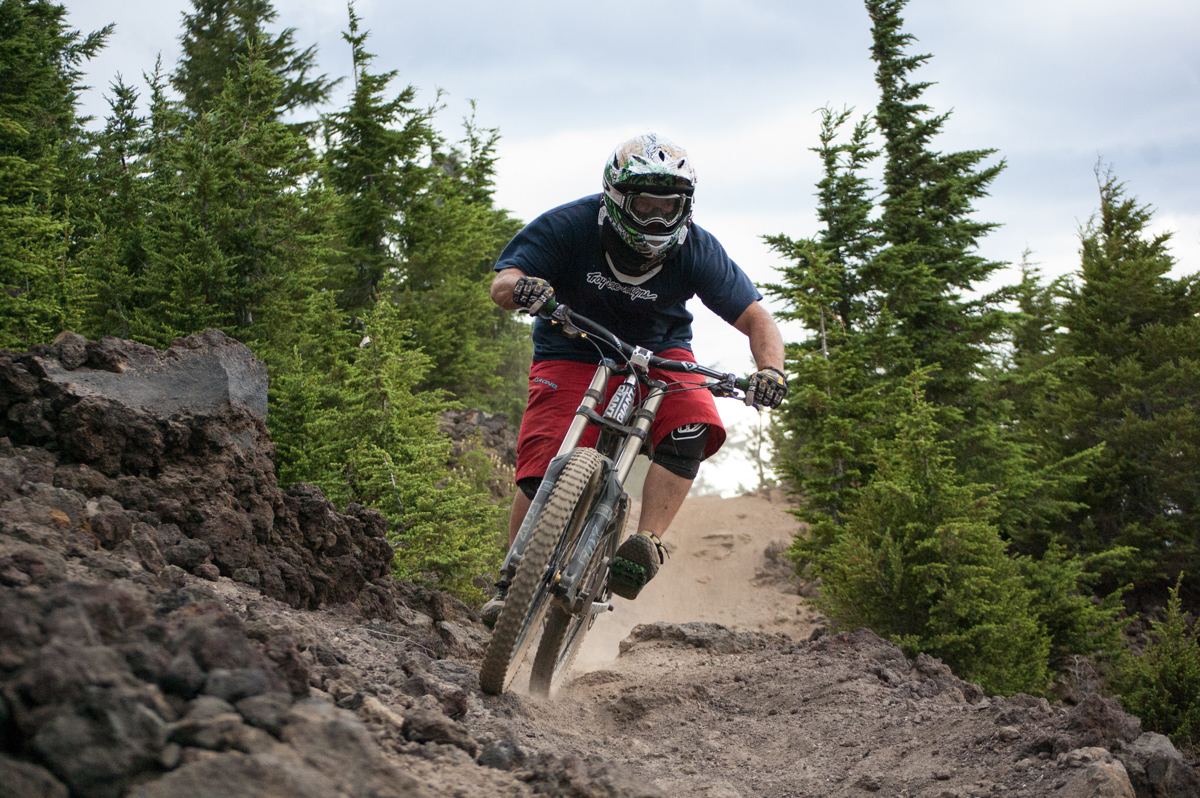 The double-edged sword of weather gave us great conditions, but also cut the day short. Severe weather forced Mt. Bachelor to shut down the lift just before torrential downpours rolled through, drenching us just after we hit the lot. More importantly, though, it provided a fantastic background for photos! 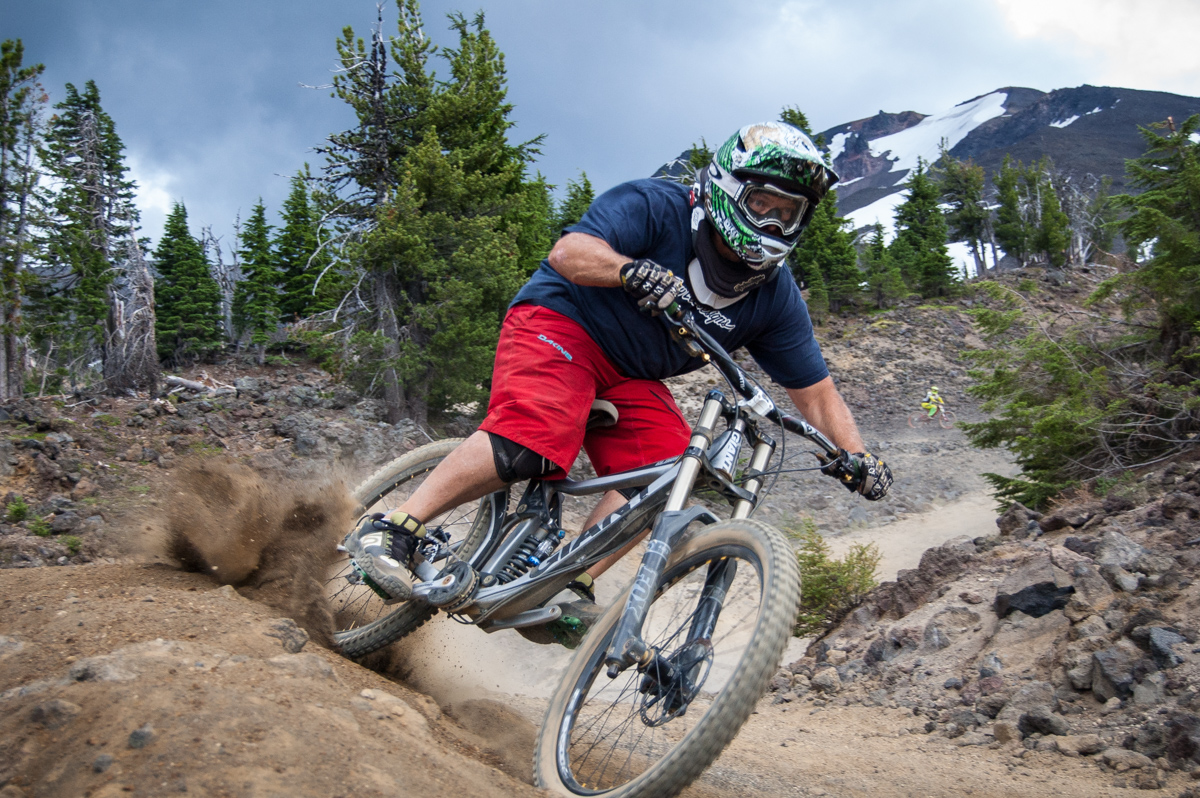 Bachelor is an ideal place to up your steeze factor, which is way cooler than dorking out trying to race to the bottom as fast (and ugly) as you can. Plan ahead with your riding buds to take the mountain section by section for a run, shooting a few pics along the way. You’ll be amazed by how much you learn about the trail and your technique just by re-riding some sections you may have blasted through the first time. 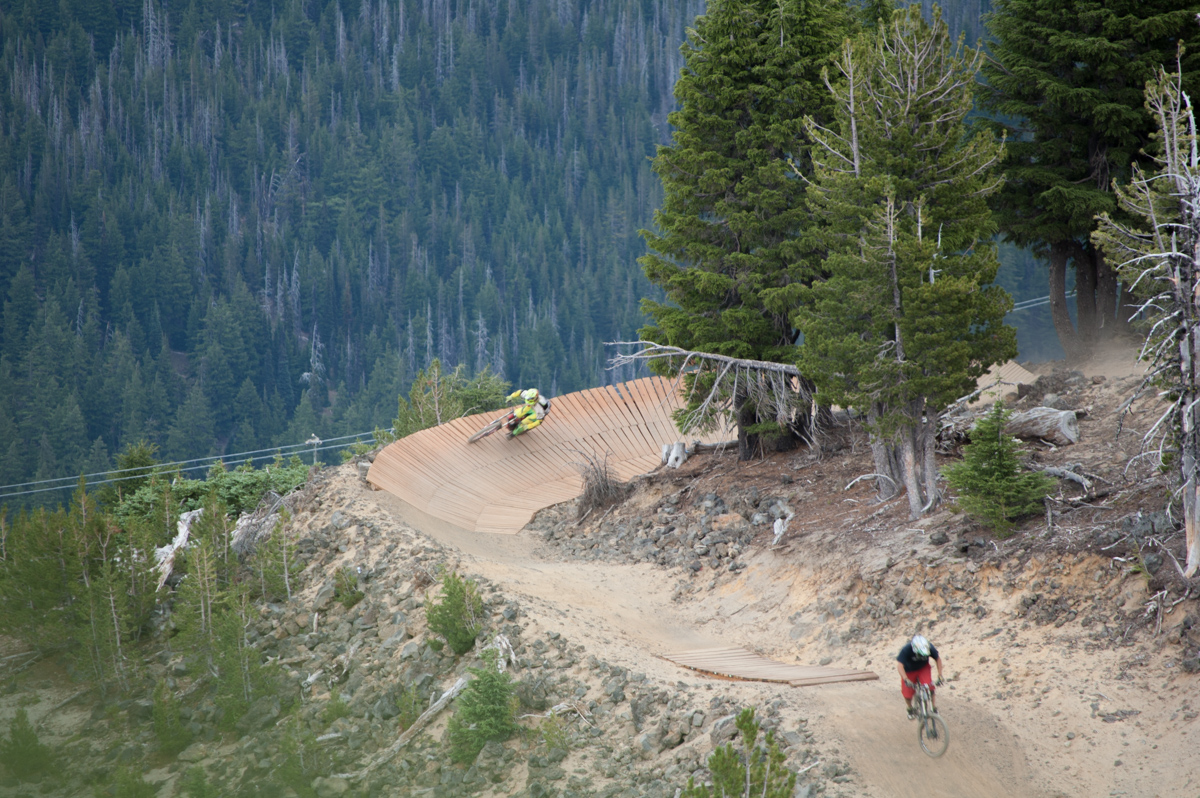 After Ride: If you’re in Bend and you skate, do yourself a favor and head on over to Sisters Skatepark in Sisters, Oregon. The concrete work is incredible and the park is complete with a legit backyard pool and main pool plus the cradle, which my dude Partain sent waaaaay past vert… after 2 days of riding Bachelor… at 51 years old. Anyone who says action sports aren’t for life, refer them to Partain! 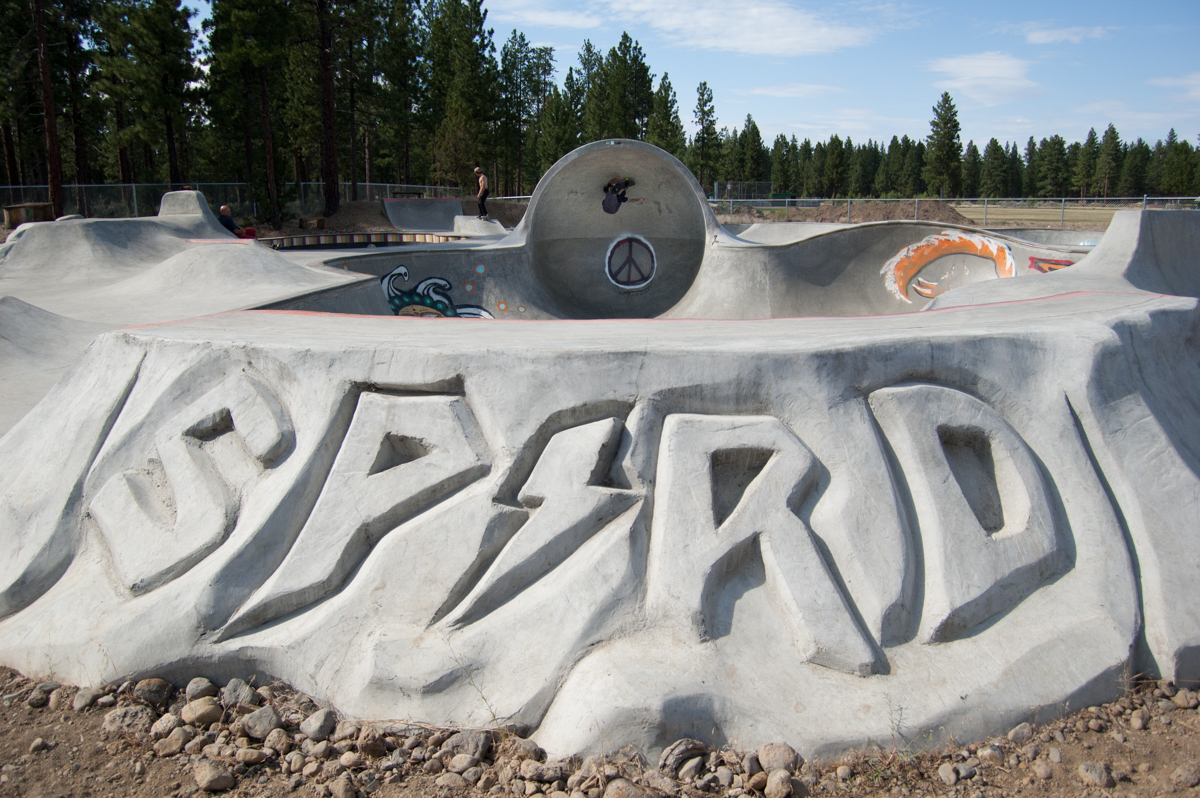 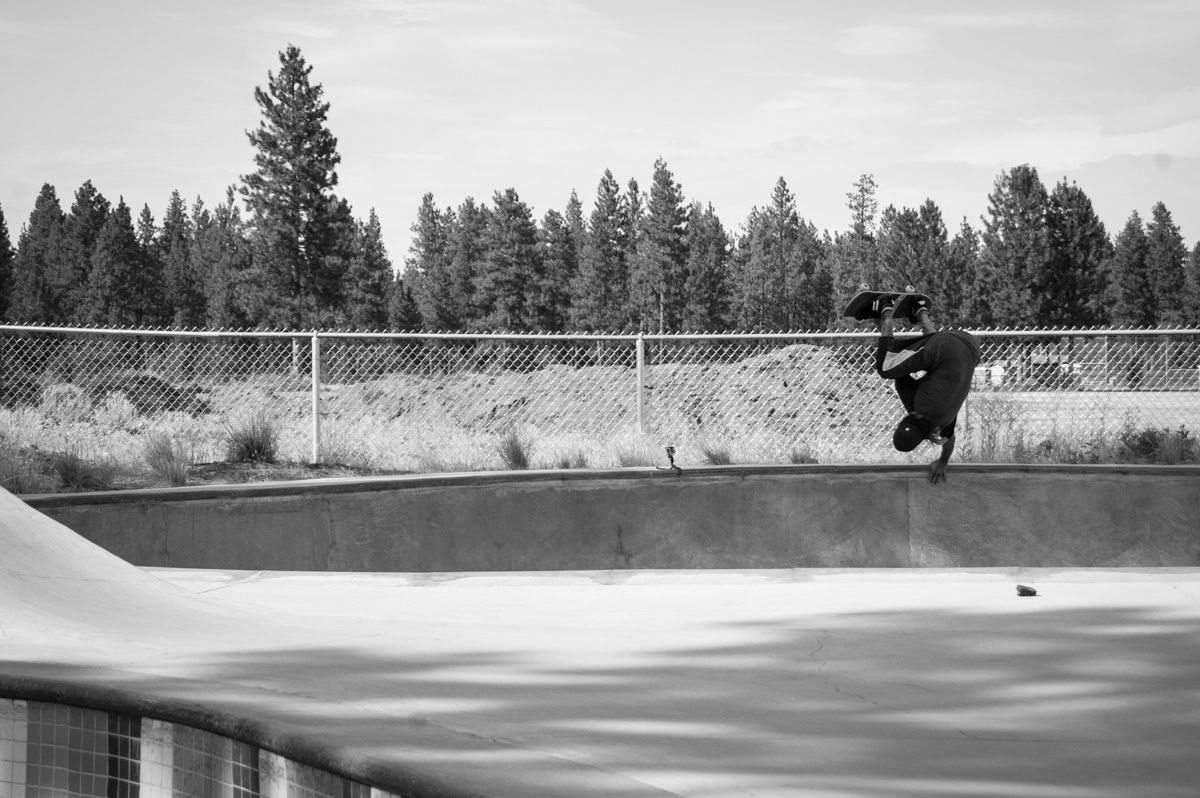 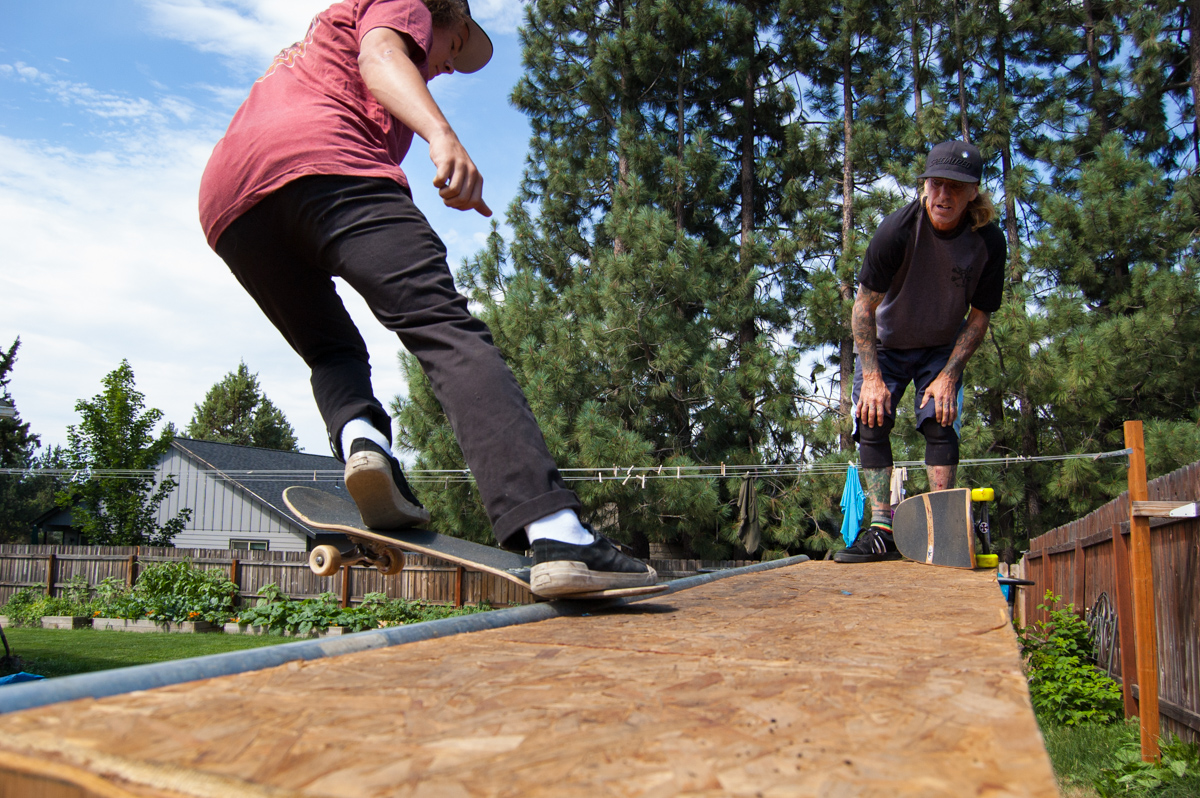 With our first Mt. Bachelor excursion out of the way, one thing is certain: the mountain rocks, and Bend is as rad as it gets. A town that’s packed with micro brews, cyclists, dogs, and more trail networks than road names, is never a bad thing. And when the brotherhood of action sports can bring together people spanning styles, states, skills, and generations… that’s the kind of thing that makes this community a one-of-a-kind. Go ride, go shoot… run what ya brung!