In 1988, George Michael was at the top of the Billboard charts with his hit song, Faith, and Rick Astley’s Never Gonna Give You Up was a genuine hit, decades before Rickrolling became a meme-worthy internet prank.  Guns N’ Roses even made the Billboard Top 5 that year.

Well, Guns N’ Roses just wrapped up their 18-month, $500 million Not in This Lifetime tour this month, which just goes to show how many people appreciate the classics.

The Ritchey Ultra, which debuted in 1988, is another such classic, but one that’s actually improved with age and learned some new tricks. (No offense to GNR fans.)

While the original Ritchey Ultra was billed as a mountain bike for racing and “designed for experienced riders,” the new (and IMO greatly-improved) version targets “cross-country riders looking to get rowdy” and even “enduro riders lusting for some all-mountain shredding.” The first group is essentially modern XC racers; after all, race courses have become more technical over the past few years. In that sense, the Ultra mission hasn’t changed all that much.

However, the latter group suggests an expansion of the Ultra mission, addressing the wants and needs of the hardcore hardtailer. While we can quibble over where to draw the line in terms of specs for a hardcore hardtail, there’s no doubt the 2019 Ultra ups the technical aggressiveness and overall fun factor of this classic mountain bike design.

The Ritchey Ultra is a steel frame, 29er mountain bike designed around a 120mm travel suspension fork. Ritchey is known not only for innovative and proven design, but also an exquisite build quality that uses lightweight, Logic Tubing conceived and designed by Tom Ritchey himself.

Up close, the attention to quality construction is evident from the miters and welds to the paint job and graphics. In many ways, the frame is similar in quality to what one would expect from a custom builder, and the fact that it’s sold as a frame-only means no two Ritchey Ultras will be alike.

The bike features a tapered, integrated headset and a threaded bottom bracket. On the XL bike I tested, there are mounts for two water bottle cages inside the front triangle.

The geometry on the Ultra hasn’t changed much compared to 30 years ago. Of course the head tube angle slackened from 70-degrees down to 68.5-degrees for sizes medium and up. The chainstays on the size large bikes grew just 10mm to 439mm despite jumping from a 26-inch wheel to 29er. And the seat tube angle even managed to stay put at 74-degrees for small and medium frames.

All of the geometry numbers on the 2019 Ultra compare favorably with the averages for modern, full suspension trail bikes which is pretty incredible considering how little each individual Ultra measurement has changed from 30 years ago.

On paper, the new Ultra should provide a similar ride feel to the original but there are several new features that ratchet up the radness quotient quite a bit.

For starters, the original Ultra shipped with a rigid fork while the new frame is designed around 120mm of front suspension travel. That alone allows riders to tackle rough terrain at much higher speeds.

Ritchey also added a routing port for an internal dropper post, something that definitely didn’t exist in 1988. (Yes, there was the Hite Rite but that didn’t need any sort of frame adaptation.) For this, the 2019 Ultra features cable housing guides on the down tube rather than full internal routing.

Finally, the frame is designed to accommodate tires up to 27.5×2.8″ or 29×2.4″, both decidedly modern (and aggressive) tire sizes. The Boost-spaced rear end helps make this possible while still leaving the option to run a 2X drivetrain. These choices show an interesting duality, with nods to both XC racing and do-all, recreational shredding.

All told, a size large frame is said to weigh 2,570g (about 5.7lbs.). My XL test bike built up with mid-level components (including pedals, accessories, and a dropper post) weighs 28.1lbs. Compare that to the 1988 Ultra which was said to weigh only slightly less at 26.5lbs. with a rigid fork. 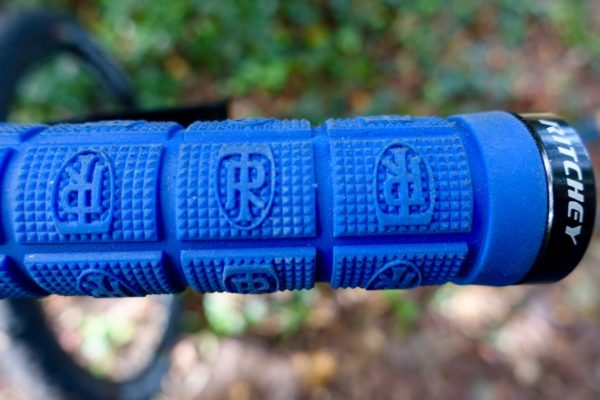 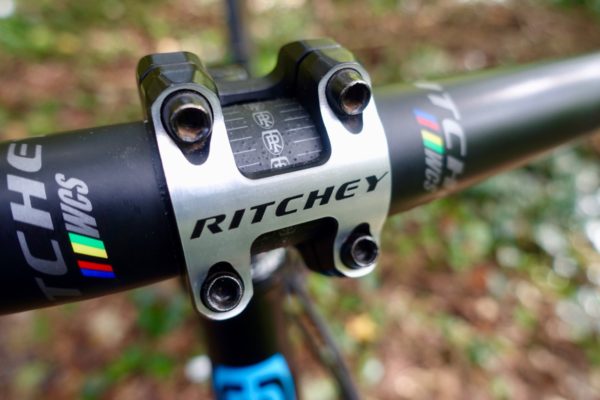 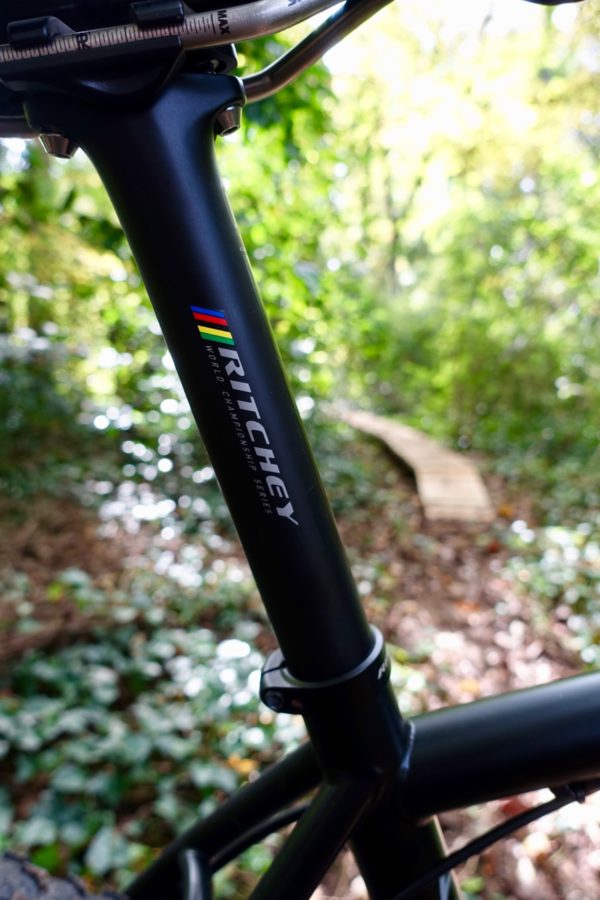 Ritchey doesn’t offer the Ultra as a complete build; buyers can purchase the frame for $999. That’s a bit of a shame because the Ritchey company actually sells a number of quality components both after market and as original spec on many other brands’ mountain bikes.

My test bike came decked out in all manner of Ritchey components including:

Up front, the bike shipped with a RockShox Reba fork which proved to be a solid choice — capable enough, but not too heavy or expensive. The bike has a GX Eagle drivetrain, including cranks, and TRP T4 Slate brakes, each of which performed flawlessly.

I swapped out the Ritchey fixed seat post for a PNW Components Rainier dropper post with 170mm of travel. You can read my review of the post here.

It’s hard to say what it would cost for a consumer to put together a similar build with the Ritchey Ultra frame, but I imagine a bike like this could be built for around $2,500 USD, or possibly less. The 1988 Ritchey Ultra sold for $1,300 which is roughly $2,800 when accounting for inflation. More bike for less money? Just saying, it’s a great time to be a mountain bike buyer.

Right off the bat, the Ritchey Ultra proved to be a great fit. In many ways, mountain bike geometry feels like it’s in flux right now, with brands pushing extreme angles and measurements if for no other reason than to stand out, or to see what sticks. This can lead to bikes feeling a little strange or simply “off” during the first few rides, but the Ultra feels right from the start.

After riding the bike for several weeks, I can confirm the fit still feels just as dialed. I’m pleasantly surprised by just how comfortable the bike is, thanks to the fit but also the materials and construction.

Ritchey uses premium steel tubing to construct the Ultra, which gives the bike an incredible ride quality. This is especially noticeable for those coming from an aluminum hardtail which can be overly harsh. Most hardtails I’ve ridden leave me feeling prematurely tired and beat up after a long ride, but not so on the Ritchey Ultra.

In a 1989 review of the original Ultra in Mountain & City Biking magazine, the reviewer wrote, “You can hammer on it all day long and it won’t hammer on you.” I couldn’t agree more.

Hardtails are known to climb more efficiently than full suspension bikes, and the Ritchey Ultra is no different. The relatively steep head tube angle makes it easy to attack short, punchy climbs while the stiff rear end provides great support on longer grinds.

When climbing in the seated position, an annoying creaking sound developed but I quickly determined it was coming from the saddle shell.

Other than that, the Ultra is incredibly silent. Like, stalking cat quiet. Whether mashing on the pedals with all my might or bouncing across the top of a root web, this is perhaps the quietest bike I’ve ridden. If you listen closely, you can barely make out the sound of the freehub in the Ritchey Trail wheels, almost like the hub is wrapped in a pillow. The fast-rolling Z-Max tires even tiptoe through the dirt.

I thought the low-resistance Z-Max Evolution tires would give me trouble on technical or steep climbs, but I was pleasantly surprised by their performance, even in wet conditions. On hardpack and pavement, these tires absolutely fly! Perhaps the only time I found the tires lacking was when laying the tires sideways in corners. The grip transitions well in corners, up until the point where it just disappears.

The Ultra doesn’t slack when it comes to descending. Having 120mm of travel up front is just enough to keep the rear end in check; any bigger and riders might be tempted to write checks the rear wheel just can’t cash. Tricky, technical descents — even really steep ones — are a joy when the Ultra is paired with a long-travel dropper seat post.

On wide open, fast descents the Ultra feels stable, just as long as the terrain isn’t too bumpy. When the trail does turn rough, just tap the brakes to regain control again.

If you’re like me, you like the idea of owning a hardtail but don’t know how often you might actually ride it. Surprisingly, I’ve found myself choosing the Ritchey over the full suspension bikes in my garage more and more thanks to both its comfort and capability.

The Ritchey Ultra is one of those bikes that will remain a classic for many years to come thanks to its timeless design and quality construction. It’s a bike I would be proud to own for tackling almost any ride.

Thanks to Ritchey for sending the Ultra mountain bike to test and review.