I stopped racing ‘cross in 2012, and as soon as I stopped I went insane. I know that I went insane because I sold my Surly Crosscheck, and selling off a Crosscheck is something that a person should never, ever do. I regret it highly, and I brought that Surly longing baggage along with me when I demoed the Surly Ice Cream Truck at Outdoor Demo.

Granted, the Crosscheck and the Ice Cream Truck, which is new for 2015, are very different bikes, but they are both Surlys, which means they benefit from the company’s proprietary 4130 steel and, well, Surly employees’ general surliness.

Here’s me “shredding” on the Truck (nothing actually got shredded):

I jumped on the Ice Cream Truck ready to love it, and it did not disappoint me at all. It was the first bike I rode at the demo and was a perfect start to the day.

Surly say that the Ice Cream Truck is:

“A bike that [combines] the playful hard-hitting awesomeness of our trail bikes with the float and grip of our fattest fatbikes … Slacker angles and stiffer everything mean that the Ice Cream Truck is a trail fatbike perfectly at home bombing your snowy trail, your sandstone Moabness, your Endor-like pine forest trails, or your local garbage heap.

As is often the case with Surly, in addition to bosses all over the place for all manner of racks and fenders, you also get tons of driveline options with the Ice Cream truck’s rear dropouts:

In my short time on the Ice Cream Truck, I found it to be extremely nimble. Lots more nimble than I thought it would be. Later on, chatting with Surly employees about it, they pointed out that the tires may be big, but they’re full of air. It’s not like fat bike tires weigh 50lbs. Hmm. Good point.

But I think there is some geometry magic at work here too, which is reinforced by Surly’s allusions to “slacker angles and stiffer everything.” I found that the front wheel was very easy to lift if I wanted it to come up. In fact, I nearly yanked the whole bike right out from under myself. I’m glad I didn’t. Some other journalist on a fat bike would probably have ridden straight over my body and never even known I was there. 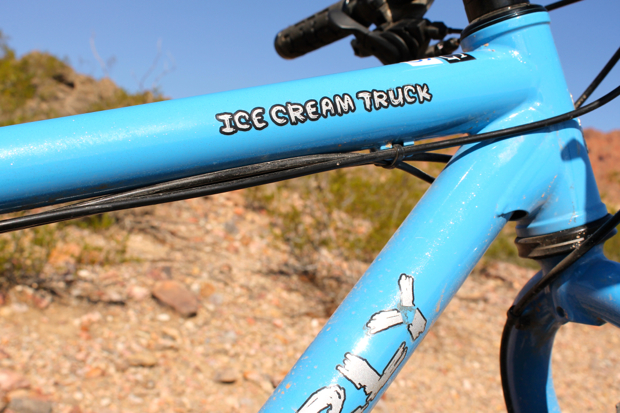 The Ice Cream Truck is “coming soon.” I’ve seen mention of it being available in July 2014, but there isn’t a link to buy on Surly’s ICT Bike page here, so perhaps it’s not quite ready just yet. When it is ready, the complete build will run $2,700 MSRP with an “ops” version to come later at around $2,400.

The build features Surly’s own crankset mated up with Shimano SLX derailleurs and SRAM Guide brakes. The tires are Surly’s Bud and Lou tires, both at 4.8″ and 120tpi. To quote Surly’s Frame Highlights on the Ice Cream Truck when mentioning the 4.8″ tire clearance: “hell yes.”

What does it weigh? I don’t know. But I think if you’re asking that question you’re looking at the wrong bike. Just chuck a leg over the Ice Cream Truck and see if you don’t have some fun.

Gear
Trace36 HLR Fork from X-Fusion Cements the Brand's Commitment to...
Progression
MTB Riding Position Breakdown: The How and the Why
Gear
Hunt Revises Enduro and Trail Wide Wheels, Still Retail Under...
Community
From Pup to Trail Dog: How we Prepared our Singletrack...
Subscribe
Login
Please login to comment
6 Comments
Most Voted
Newest Oldest
Inline Feedbacks
View all comments

What size was the test frame, and did you feel it was too small? Looks dwarfed and a little cramped under you.

It was a large. I have long legs so I could probably ride XL frames, but I prefer miles of seatpost on a large frame so I get a slightly smaller bike.

Hey Jim,
How tall are you and what is your inseam? I want one of these and cannot test ride it.
Thanks

Jim, you left out the part about WHY you like a smaller bike. More nimble and flickable? Nope. Jim’s just looking to shave a few grams off the weight of the bike. 🙂

Well plus my stumpjumper’s wheelbase is like a quarter of a mile. If I had a large frame it’d be too long to fit in my apartment.