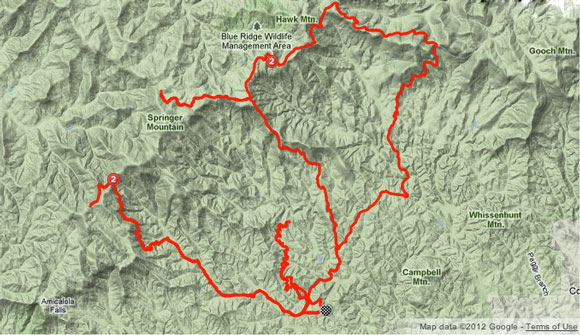 With a little over a month left until my first dirty century, my training is really ramping up and yesterday I clocked my longest mountain bike ride ever. Here’s a recap of where I’ve been and the latest things I’ve learned.

Two weeks ago I was able to get in a 70-mile ride in four and a half hours – but that was on a road bike. I felt great afterward, though I really started to get bored near the end. I can’t imagine doing a longer ride on the road but it seems to be a great continuous workout. A friend recently won the 6-Hour singlespeed race at the GA International Horse Park and I asked what he had been doing to train. His answer: nothing special, except two long road rides this year. Ah, the power of the road ride…

Yesterday my plan was to hit the forest roads in the Bull Mountain area north of Dahlonega and the weather forecast predicted temps in the upper 70s and a chance for afternoon thunderstorms. I planned to hit the trail by 7:30a and finish by 2:30p at the latest so I figured I’d miss the rain. I left the rain jacket in the car and headed out for my first “lap” around the Winding Stairs route in shorts and a short sleeve jersey.

At the bottom of the loop I started passing Army Ranger trainees from Camp Merrill on some type of ruck march that looked totally miserable. It was still early in the morning but based on their appearances, these guys had probably been at it for hours already. I greeted each soldier as I passed by and continued up to Cooper’s Gap. 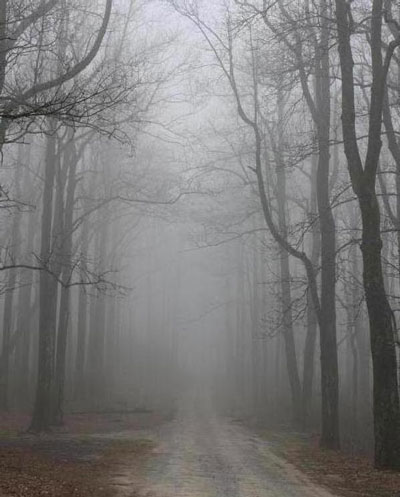 At Cooper’s Gap the water buffalo was gone so I wouldn’t be able to refill my water bottle this time. There were several empty milk jugs tied to a stick, no doubt someone’s makeshift attempt at providing water to the Appalachian Trail hikers who come through this intersection. At this point the clouds started closing in and I found myself riding in dense fog. I felt a few drops of water hitting my arms but figured it was just condensation from the trees above.

After a few miles I became completely disoriented in the fog and thought I missed the turn for the Winding Stairs descent. Not a big deal – I was heading out and back to the Springer Mountain trailhead to add mileage anyway. After a few more miles I expected to see the trailhead at any moment and was surprised to finally pass Winding Stairs. Either I was riding very slow or the fog was playing tricks on my mind.

At the Springer Mountain trailhead I wolfed down a PB&J sandwich and chatted with some hikers. These guys seemed really surprised to see me and couldn’t believe I was riding in these conditions. I didn’t understand why they thought it was such a big deal – until I realized they were wearing long sleeves and pants and ponchos to stay warm and dry. I was soaked and wearing nothing but shorts and no sleeves and it was full on raining at this point. Clearly I needed to get off the mountain and moving again.

I quickly descended and rode back to the car to restock my food and water supplies and now it was raining at the bottom of the mountain too. After 30 miles of riding I was mentally depleted – I wasn’t quite halfway to my goal for the day and the conditions just plain sucked. I grabbed my jacket from the car and stuffed it in my pack but not 50 feet from the car I stopped again and put the jacket on – I was too tired of being wet and being hot seemed like a better option at that point.

For the next leg I decided to ride up FS 28-2 toward the top of Amicalola Falls. Leah and I rode this section with a group of friends back in the 1990s and ended up getting lost in the area so I was sorta familiar with the road. The first couple miles were paved, and once the road turned to gravel it started gradually ascending. There are a few primative campgrounds along the stream beside the road and at the 5-mile mark the road started getting steeper.

The National Geographic topo I had with me showed the road becoming paved near the top but clearly this wasn’t the case (unless you count boulders embedded in the “road” as pavement). The road kept roughly the same grade the entire way up and was very pretty (at least the 20 foot radius I could see around me due to the fog). After what seemed like forever, I reached Nimblewill Gap at about 3,100 feet. The approach trail to Springer Mountain crosses the road here and I continued climbing on FS 46. After about a mile and half I had a decision to make: continue on, descending into Amicalola State Park or returning the way I came. I chose the latter, mainly to avoid riding too much pavement.

The descent down 28-2 was fast and frankly became exhausting after a while. At the bottom I returned to the Bull Mountain area and took FS 83 over to the Bull Mountain trailhead. After riding 83 to the end, I rode back via the Bull-Jake connector singletrack and did a final out-and-back on 28-2. Yeah, I suppose riding all that (relatively) flat stuff at the end was cheating but it was the best I could do.

In the end, I clocked 65 miles in less than 6 and a half hours, right on pace for my 10mph average goal. My previous longest off-road MTB ride was 62.1 miles (Sumter Metric Century) so I was stoked to set a new personal best. Not only that, according to Strava I climbed 7,100 feet which is also a record for me (previous best was 6,000-ish feet between Paradox, Colorado and the Utah border).

So training seems to be going well and I’ve even figured out a few more things:

So what’s next? Longer rides of course! Yesterday’s ride was about 2/3 of the way to 100 and at least half of the climbing I’ll do at Cohutta so there’s still a long way to go. I just hope it doesn’t rain on race day!

Trails
An Intro to Bikerafting: How it Works, and How to...
Trails
Trail Flow: Copper Mountain adds Pump Track, Adaptive MTB Trail...
Gear
The We Are One Arrival Is a Mid-Travel Bike With...
Gear
Enduro Deals & Early July 4th Sales
Subscribe
Login
Please login to comment
13 Comments
Most Voted
Newest Oldest
Inline Feedbacks
View all comments

great write, just keep logging big miles and you’ll do fine. just back off a little a couple weeks before so you got some fresh legs under you. never done one myself but you got me interested now. we have the mohichan 100 here in ohio, just might have to check into it. good luck with the rest of your training and on race day.

Dang. Good on ya for that. No way I’d spend 6+hrs riding gravel roads in the rain by myself, that takes some determination! And I agree with taking it easy early on, stay out of ‘the red’. If you’re breathing too hard to talk, you’re going too hard.

So what is the longest ride you plan on doing before the race?

I’m thinking it would be good to get an 80-90 mile MTB ride in before the race but I don’t know if that’ll happen.

Yeah, those turns and little rises on the top of the ridgeline between Hightower and Winding Stair all start looking the same after a while! Thankfully, Winding Stair is a pretty major intersection so it’s kind of hard to miss. Glad that the ride went well despite the lack of rain gear! 62 miles and 7000 feet of climbing… that’s a big day, I think you’re excused for the “Flat” stuff at the end!

WOW! That is simply amazing… back when I was a youngster I toured across country and our average day on the road was 85 miles, I couldn’t imagine riding trails for that long. That’s awesome.

Wow, nice job sticking it out in those less-than-optimal conditions.

When you load something into Strava and it becomes a new PR (congrats btw!), does it give you a message or a pop-up or anything? Or do you just have to figure that out by yourself?

Wow, what a day. I just know you’ll make it when it comes time for the real thing. Great tips at the end of the write up.

Jared, Strava automatically identifies segments within your ride and lets you know how you did on that segment relative to others and yourself. It doesn’t track PRs like longest ride, longest distance, most climbing, etc. – just speed-based records.

Once I get a GPS, I’ll have to check it out.

Great article! And that picture could be next POD.
The most important is a mental condition and You sounds very confident. Keep on getting those miles and you’ll be fine. And yeah, I’ve become interested in something big like this too. Of course, I dont feel ready yet but maybe next year…

@trek, i believe the Sumter metric was actually a bit over the 100km mark. I thought it was in the 63 mile range. dgaddis or seenvic might know for sure. At least my computer was showing me that.

Nice write-up. Cohutta won’t be our first off-road 100, but it will be the first in a long while… and the first with 14,000 feet of climbing. I wish we had mountains here in North Texas to ride. We are undertrained for distance and climbing at the moment but we have a couple 100K races in Arkansas this month to (hopefully) get us in better shape.

@trek7k, if you click on your profile, it will show you some PR’s such as longest ride, biggest climb, all-time distance, all-time rides.