“I am not a teacher, but an awakener.” – Robert Frost

You probably remember very little of the quail shot crammed down your throat during Course XYZ 10, yet some of those who taught you have left lasting tread marks on your mind. What was it about Mr. Benson’s high school biology class that still inspires you today? Was it the masterful presentation on the mitochondrial electron transport chain? It’s less likely you admire past teachers due to their profound insight and knowledge regarding complicated subject matter, than it is their contagious passion, attitude, and drive for whatever they teach. Still don’t know what I’m getting at? Three words: Dead Poets Society.

For some, it hasn’t been long since you swung a leg over your first mountain bike, while for others, you remember your first rides on the early clunkers (see also Klunkerz and some modern clunkers). However long you’ve been shredding, ripping, hucking, and hauling isn’t important here. What is important is that you:

At some point, someone or something inspires, compels, and impresses you to send your ride to the next level, usually just at the time when you’re ready to learn. These people, places, and things are your teachers.

I met Gary in the summer of 2002 when I was asked to help lead a patrol of Boy Scouts on a mountain bike ride in Eastern Idaho. At the time, I was 22 years old, single, and had nothing better to do and all the time in the world to do it. Gary stood a little over three feet tall, weighed about 35 pounds, and was as tough as… aluminum. Gary was a full suspension Gary Fisher Joshua I borrowed from my uncle for the trip that would amount to nothing more than a couple leisurely cruises through the park. Unimpressed with my first exposure to mountain biking, I held on to Gary for a couple more weeks with a strong sense there had to be something more.

I would take on my new form as a biker on the Park City Town Loop trail during a weekend of camping with my family. Decked in cotton cargos and the trusty old hand-me-down family helmet, I would fumble, fall, slip, and spill over 8 miles of singletrack, never dropping the smile from my face. Gary was my gateway drug to future crimes in biking and despite exhaustion, ache, and injury that day, the verdict was unanimous and a sentence was issued: life on singletrack (CLUNK!)

By the time I moved back East to attend school, my enthusiasm for mountain biking had taken a back seat to “other” outdoor interests. Okay, i’ll be honest… I had become… (gulp)… a roadie. I know, I know, but I’ve since repented of my wheel sucking ways and it was Charlie that redeemed me. I was mountain bike-less at the time, having sold off my Cannondale before moving, so it was on another borrowed bike that I rekindled my flame and met my next teacher, Charlie, at the trail head of the West Hartford Reservoir.

There were two things I noticed (judged) about Charlie. First, he was ancient! To be fair, he was 73 years old, but I’d never seen someone as old as him on a mountain bike. Second, he had a super outdated bike (or so I thought). The entire frame was steel, there was absolutely zero suspension to be found, one measly gear, and monster truck wheels (turns out it was a legit Surly Karate Monkey.) Poor old man, I thought, must’ve been the first and only bike he’s ever owned. Well, we took to the trail and the decrepit man with a bike that matched his age WHOOPED ME! This is basically how it went:

…and me? Bashing, crashing, stalling, and panting the whole way. Even so, my passion for mountain biking was rekindled by the way Charlie rode his bike: fast, skillful, pure, with style, grace, and a big smile. Never mind the Metamucil and Ensure as his post-ride beverage, he did it all on nothing more than a fat-tired road bike… with one gear! So for me, it was so long slipstreaming, suffering, and Spandex, hello… uh… FUN! In fact, I was so inspired I went out that same week and bought my own fully rigid, steel frame, singlespeed 29er.

One day, while riding the world wide web of mountain biking, I came across an article discussing the importance of a neutral attack position. The author, referencing Lee, a well-known teacher/guru/shredder, described the way in which you drive your weight through the bottom bracket via the pedals whilst maintaining the lightest possible pressure on the handlebars. In this way, the rider creates a baseline stance of stability to which he or she defaults and from which all other movements stem. It wasn’t necessarily this tip itself that shifted my thinking, but the “ah-hah” moment was found in the realization there was a science to riding. You mean there’s more to it than just pedaling real hard and bashing stuff? Indeed. Although very insightful and applicable, the take-home message from this tips-to-make-you-better/faster/stronger article for me was the decision to begin dissecting technique, employing the science, and developing an art of riding, and for that, I credit Lee. 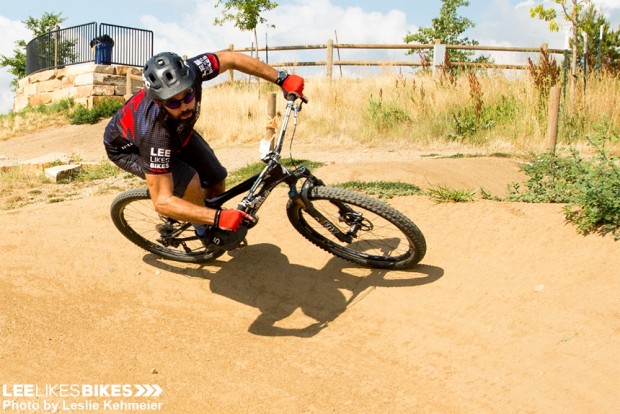 My mountain biking teachers are few and sublte, yet have been empowering agents of change shaping how I ride and encouraging progress. Whether it’s an individual or group, a bike or a trail, a credentialed instructor, or just an old dude who loves to ride, pursue biking (or anything else for that matter) long enough and you will encounter your teacher(s). You will connect with someone or something facilitating a change in the way you think and behave, or you will experience something that will awaken you to a higher potential. You might see something different, something more clearly, or maybe just the familiar in a new light.

Ride with conviction, engage others of all abilities, be responsible stewards of the trail, and give back to the mountain biking community because you are a teacher, too!

Your turn: who are your mountain biking teachers?