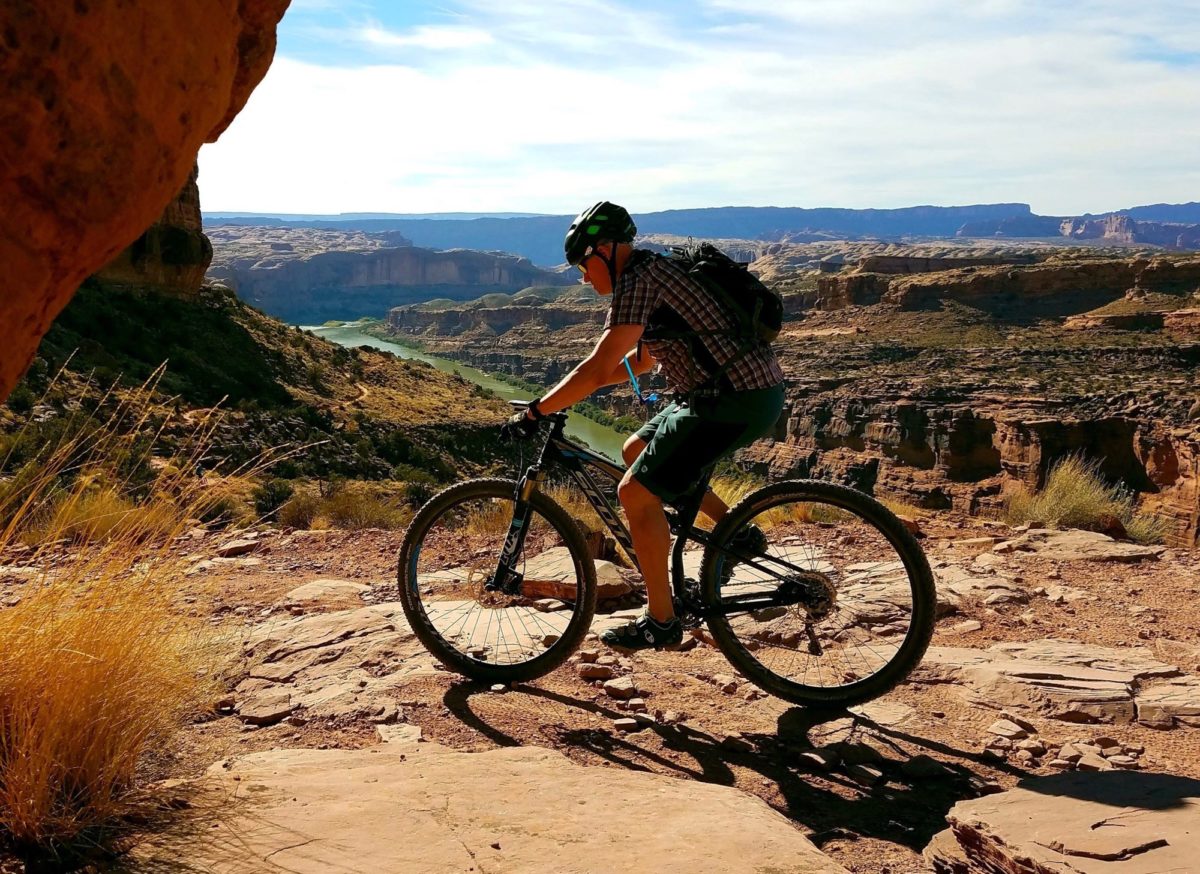 His story has been shared over campfires and piney IPAs, before and after races, or during hazy, caffeine-fueled drives to and from bike events.

Never mind that the facts have likely been muddled by time.

Richard’s tale starts at Landahl Park in Independence, Missouri, a quick hop from Kansas City. Out on his own, Richard decided to ride a line called the “Death Drop.” I mean, who am I to say, but maybe that should’ve been a clue (he gets major points for bravery).

OTB he went, snapping both of his arms like dry kindling. The story goes that Richard, with badly-twisted arms, kicked his bike into the woods, then stumbled his way into a nearby shooting range.

Here’s where it gets fuzzy. See, I like to think the intercom sputters to life as a delirious, candy-colored man in skin-tight clothes wanders out onto the range. “Hold your fire,” I imagine them squawking.

Next, Richard wakes, looking upward into a circle of guys as one pushes his way through shouting, “everyone back, I’m a dentist.”

Maybe none of that really happened. But it’s damn amusing. And were Richard not near a road and a place like the shooting range, we might still be hunting for him in those woods, arms twisted into origami.

That’s the thing: being ready to deal with the unexpected. Because there are two types of mountain bikers: those who have crashed and gotten injured, and those who will.

As Carl Weil says, “there are old bikers and bold bikers, but no old, bold bikers.”

Carl is the director of the Wilderness Medicine Outfitters in Elizabeth, Colorado and has written multiple books on the subject of wilderness emergency care. He has covered a lot of miles – and rescues – of all types, and is emphatic: be prepared.

Both Carl and Dr. Greg Cummins, a mountain biker, internal medicine specialist, and former director of the Midwest Mountain Bike Patrol, agree. Get some decent first aid training and carry a first aid kit–especially if you’re in places that are hard to reach.

Carl suggests carrying, at a minimum, a triangle bandage, a SAM splint (or two), plastic covered gauze, triple antibiotic ointment, a Cinch-Tight compression bandage, gauze pads, roll of tape, CPR shield, and Micropur MP1 tablets for cleaning water when stuck and making wound irrigation with your hydration pack. “You don’t need a lot of things in your kit,” says Carl.

Here are some tips to help you deal with specific injuries when you’re far from home.

My friend Richard was lucky. He made it out quickly. Carl explains, “You have somewhere between five minutes and one hour where the pain is masked.”

That means work fast if you can… just don’t be carelessly fast.

Start with the ABCDE acronym, says Greg. Check the airway, make sure breathing is normal, test circulation at the extremities, look for dislocated bones or joints, and inspect the environment for clues about injuries. “If you wreck hard enough to break a bone,” Greg says, “there could be other issues, such as head or internal trauma.”

Stabilization is important. That SAM splint would be helpful in this situation because it’s moldable and stiff to provide support. Lacking that, Greg suggests using a tube and pump or stick to keep everything from moving. Not tight, just enough to keep it steady. That tube also makes a great, easy-to-rig arm sling, says Greg–good for supporting clavicle and shoulder injuries, common injuries for dirt nerds like us.

If dealing with a break, check for circulation. “If the arm is bent and the fingers are cold and blue, you’re going to need to manipulate it to get circulation going again,” explains Greg.

For sprains, treatment is much the same. You have to immobilize the limb to reduce the pain.

All of us have been cut, scraped up, or gouged while on the trail. That’s part of the game. And most of the time, lacerations are not that big of a deal.

Sometimes, though, they can be serious. Still, wound care is actually pretty straightforward. Controlling the bleeding is the key, says Greg. “Usually it’s more superficial and controllable with pressure,” he says.

And that Cinch Tight bandage Carl recommended? It’d come in handy now to help stop the bleeding. “Time lost is blood loss, which is life or death.” But don’t use tourniquets, adds Carl.

Here’s where you can use those MP1 tablets for cleaning the wound, which will help reduce the possibility of infection. “Throw some of those MP1 tablets in your hydration pack and then irrigate the wound,” Carl suggests. Then get it covered, preferably with those bandages you are (hopefully) carrying.

If you lack bandages and need to control bleeding, “use a blood barrier of some sort, like your glove,” explained Greg. Simple compression can help. You can walk out of the woods holding steady pressure but, if you’re a long way out, it’s going to be one hell of a task. Tie a tube around the injury to hold that blood barrier in place. Just check to make sure there is blood flow to the rest of the limb periodically. “Feel below the cut to see if the skin is warm,” Greg says.

In the world of bad stuff that can happen far from home, this one is awful.

“Carry the right amount of water,” Greg says. It seems obvious, but a lot of people don’t.

Still, it can happen. If it does, quick re-hydration is key. But what if you find someone out in the woods who is disoriented and you’re not sure what happened? Here’s where checking the environment matters.

Does the person have water? Does it look like it has been used? Is his or her helmet cracked or dented? One thing you can do to check, says Carl, is the back of the hand test. Pinch the skin and see if it returns to normal quickly. If it doesn’t, or if it stays in a ridge, suspect dehydration (still check that helmet for cracks, scuffs, or dents). This has all the potential of being very serious.

This is another good place to mention those Katadyn MP1 tablets Carl talked about. If you’re a long ways from the trailhead and it’s going to take time to get out, you’ll need more water to make it. And those tablets will make the water safer and won’t take up much room at all or be a weight penalty. In fact, eight tablets will treat two gallons of water and combined, they’re the size of two quarters. Rehydrate at a rate of one pint per 15 minutes, says Carl. “Any more than that and you could vomit,” he says.

It’s hard to put too fine a point on it. Dehydration is ugly–a potential killer, even. Remember, if you’re a long way from home, being prepared with enough water or a way to treat water if something bad happens could be a lifesaver.

For overheating, picking up on early warning signs is important. Not sweating when you should and disorientation are the two most obvious. Acting quickly is important to turn this around or, like dehydration, it can get serious.

Exertion must stop. “Get in the shade, drink some water, hit vascular areas with cool water,” says Greg. “Or sit in a stream, making sure your groin is fully immersed in it.”

For hypothermia, disorientation is also an early sign. This is where a space blanket could help save body heat, says Greg. Again, work on those vascular areas to get them – in this case – warmed up: wrists, armpits, groin. When those fingers get (uncomfortably) cold, says Carl, you have between one and four hours before limb loss is a possibility.

“Avoidance is important here, again,” Greg says. “Don’t ride by yourself, or make sure someone knows where you are.”

Carl recommends heat packs for cold weather riding so you can break them open and use them on vascular areas. They are light and easy to use.

“Don’t mess with snakes,” says Greg. “They don’t want to bite unless they feel really threatened. And sometimes, even a bite won’t transfer venom because of that.”

If you or someone you see gets bitten, do not cut across the bite area and try to suck the poison out. That’s a cute Hollywood trick. “The big issue with a snake bite is keeping calm,” Greg explains. “Identify the snake if you can, too,” which helps with treatment. “Do not,” adds Greg, “bring the snake or its head into the ER. The staff hates this, and it also exposes more people to a bite.”

Look for two puncture holes, Greg adds. That’s a sign that the bite was from a pit viper, which is the venomous kind.

Unfortunately, walking a victim out can speed transfer of the venom, so it’s best to leave someone with the victim while you go get help or call it in.

“You can always go around if you’re not macho,” Carl laughs. He’s right. You don’t need to prove anything to anyone. But look, this sport is not without danger, even if you never act crazy. Regardless of what kind of rider you are, what kind of first aid kit you have, and how much training you’ve received, accidents happen.

And if you’re a long way from anywhere–say, on the Monarch Crest Trail in Salida, Colorado, where changing weather, difficult conditions, and elevation will all play a part in what it takes for you to get off the mountain–you’ll need to be ready. The best thing you can do for yourself, your riding partners, and random strangers out on the trail, is to be prepared. Go ahead and leave the weight weenie at home. In his or her place, take a kit with the items Carl outlines. That’s the kind of gear that can help you through a lot of different problems without weighing you down. And, Greg adds, carry a light wind/rain jacket when you’re going remote. It could save your life during unplanned overnights in remote areas.

Now, go have fun out there. Safely.

Please note: While Carl Weil and Dr. Greg Cummins provided information for this story, they also both assert that this isn’t intended to be medical advice or help you handle medical emergencies like a pro. Get some first aid training, carry what you need, and seek the attention of a trained professional in case of an injury.

Gear
These MTB Deals are Fire, including 40% off Patagonia Dirt...
Gear
Mountain Bike Tire Repair Tips: From Emergency to Semi-Permanent
Gear
The Maxxis Minion DHF Tire is Still the One to...
Gear
Never Underestimate the Power of a Good Zip-tie
Subscribe
Login
Please login to comment
2 Comments
Most Voted
Newest Oldest
Inline Feedbacks
View all comments

Great article. Very professional. Thank you. Last summer in CO I came across three different people in 10 days with substantial lacerations — one from my own group. Having not used my first aid kit in forever, I was glad that I persisted in carrying it all the time.

Thanks, mongwolf, I’ve seen some amazing first aid take place in the backcountry by some really experienced people (Greg, whom I quoted in the article being one of them). I think being prepared is such an easy thing – and easy thing to forget. Good thing you had your kit with you. Three serious lacerations in 10 days. After that I might stay off the trail for a couple of weeks.