Mountain biking + Snorkelling = Bad idea. We actually wrote about the World Mountain Bike Bog Snorkelling Championship two years ago but our coverage was missing one important piece of information: photos. It turns out the crazy brits are still MTB bog snorkelling and this year 30 competitors lined up to give it a try. The out-and-back course is 135 feet long, about 6 feet deep at the center, and is filled with water and mud (typical bog ingredients). I’ve ridden through some surprisingly deep puddles before but none that required a snorkel… 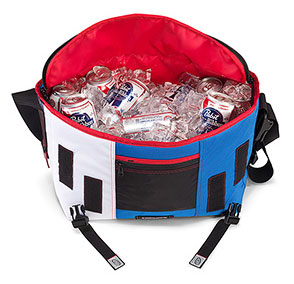 Messenger-style Beer Cooler from Timbuk2. While it’s still considered DUI to drink and ride, at least now there’s an easier way to transport beer via bicycle. The Dolores Chiller is insulated and water tight meaning you can carry cold beer under your own power faster and further than ever before! It even comes with a built-in bottle opener, though we already own more than a few bicycle-themed bottle openers like this one from Park Tool. Is that PBR in the photo? But of course, only the best. 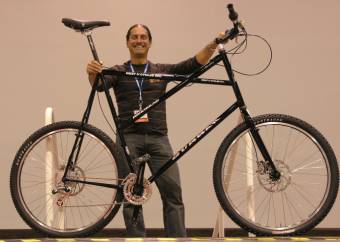 36-inch Mountain Bike for Yao Ming. If you’re a forum regular you may have seen this last week and admittedly it’s old news by now but this is one big bike! It’s a (fully custom) Gunnar Rockhound with an unusual looking 36-inch frame, 29er wheels, and it only weighs 27 pounds fully loaded. Yao Ming can dunk but can he bunny hop? Watch for low tree branches!

[…] just don’t submerse the unit in water for any length of time (guess that means no nighttime bog snorkelling). Because this unit uses LED lights you won’t have to worry about blowing a bulb due to […]