YT Industries teased their redesigned Capra enduro bike with possibly the most insane mountain bike marketing video ever produced. If you missed it, you should catch up by watching the video above, if only for its sheer entertainment value. Fair warning: while YT stands for “young talent,” there’s plenty of adult language in this video, and possibly disturbing content. On that note, to the grandpa who emailed me yesterday complaining about there being two F-bombs on the site in the past week (news to me), do you really think your grandkids don’t use these words at school?

Let’s set the morality of four-letter words aside and move onto the Capra, shall we? Here’s the big news in this recent revamp: the long-travel enduro bike is now available in both a 29″-wheeled version and a 27.5″ version, where previously only 27.5″ wheels were offered. Not only that, the travel lengths on the Capra have gotten even longer.

The linkage on the new Capra has been redesigned, taking cues from the Jeffsy trail bike. Not only does the new linkage allow for increased suspension travel, but YT claims it allows the bike to descend more confidently and climb better (of course). Here’s how they describe it:

For the new generation of the CAPRA we have fine-tuned our much-acclaimed Virtual 4 Link [V4L] suspension system even further. We adopt the downhill principle due to the low transmission and thus create the characteristics of V4L: an off-the-top sensitivity, even more ample mid-stroke support than before and a progressive ending stroke.

V4L not only gives you the confidence to hit big gaps and rugged terrain at speed, it also makes pedalling super-efficient. Additionally we have optimized the kinematics to further reduce the influence of pedalling forces. The result is an outstanding climbing efficiency with optimum climbing position and neutral riding behaviour – providing the perfect riding experience. 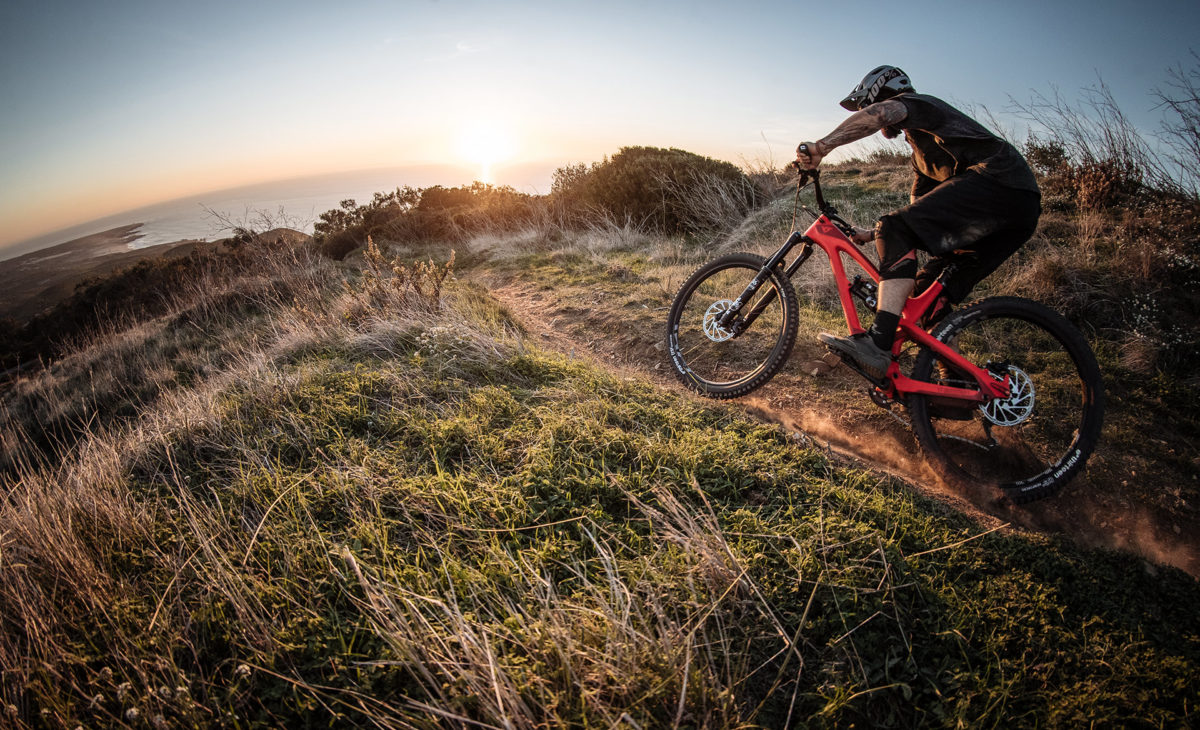 The new 29″ version of the Capra offers 170mm of travel front and rear in the top-tier CF Pro Race model. The other models of the bike use a shorter-stroke rear shock, so consequently, they offer 160mm of front travel and 160mm of rear travel. Regardless, that’s a heck of a lot of travel for a 29er. 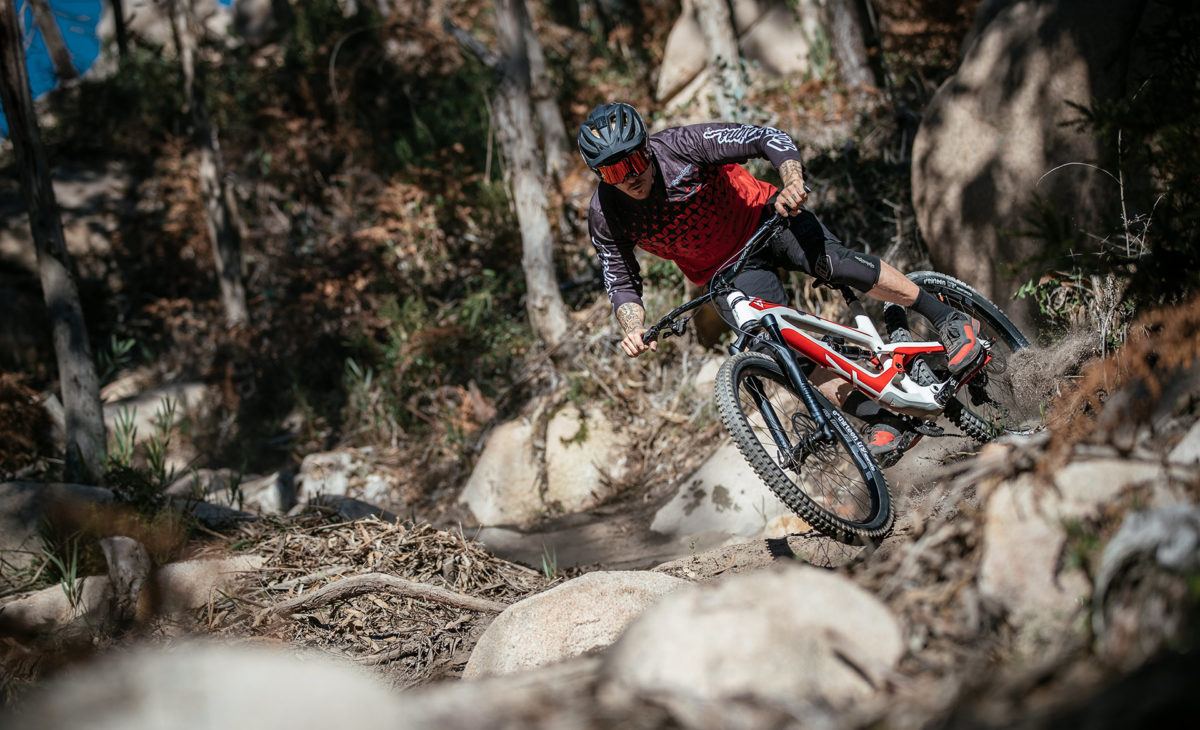 Can we just stop for a second and try to wrap our minds around single-crown enduro bikes that are meant to be pedaled, coming stock with 180mm of suspension travel? While the Polygon Square One EX hit that number last year, will we see more and more enduro bikes reaching–and maybe even surpassing–180mm in the next year or two? 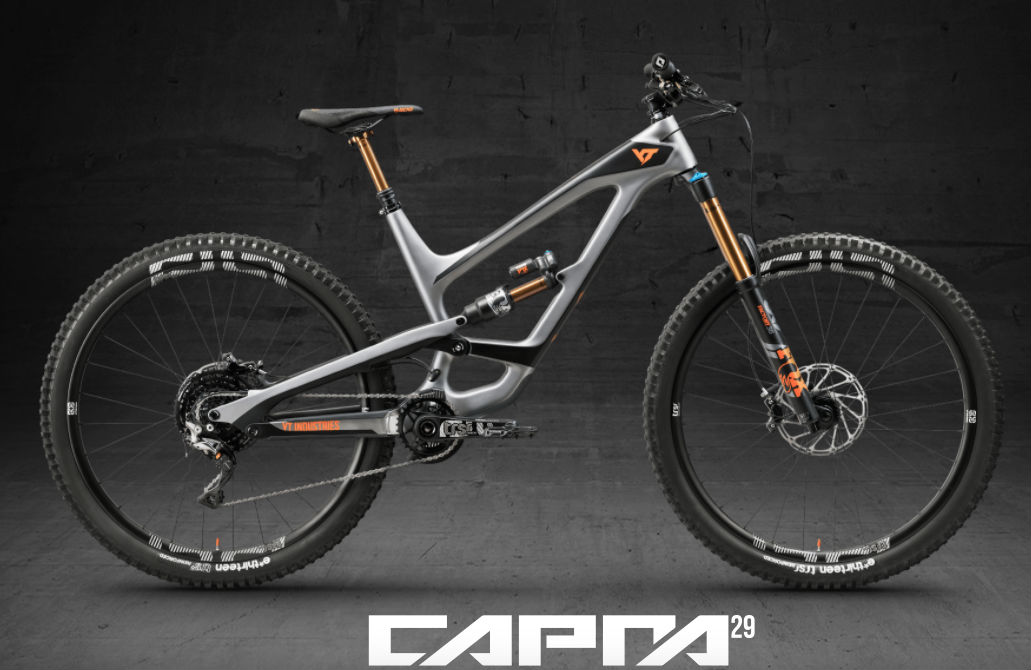 The Capra 29 CF Pro Race provides a 460mm reach in a size-large and a 65°/65.5° headtube angle, depending on which geometry setting you put the chip in. The other Capra 29 models offer slightly tweaked geometry, with a large bike offering 465mm of reach and 65.5°/66° headtube angles. Note that a size-small frame is not available in this model.

The first geometry chat below show the numbers for the Capra 29 CF Pro Race model, while the second chart covers all other 29er models.

The full-carbon frame is adorned with some impressive parts for the $5,199 MSRP. A Fox 36 Float Factory fork handles the suspension up front, with a Fox Float X2 Factory 29″ shock for the rear. The drivetrain utilizes e*thirteen’s TRS+ 9-46T 11-speed cassette like the other revamped 2018 models. The rear derailleur paired with the cassette is a Shimano XTR, and the cranks are e*thirteen TRSR carbon. SRAM Code Ultimate brakes take care of stopping duties, and a Fox Transfer Factory dropper covers the seatpost. E*thirteen TRS Race wheels and e*thirteen TRSR and TRS+ tires round out the build kit. Total claimed weight is 29.7lbs. 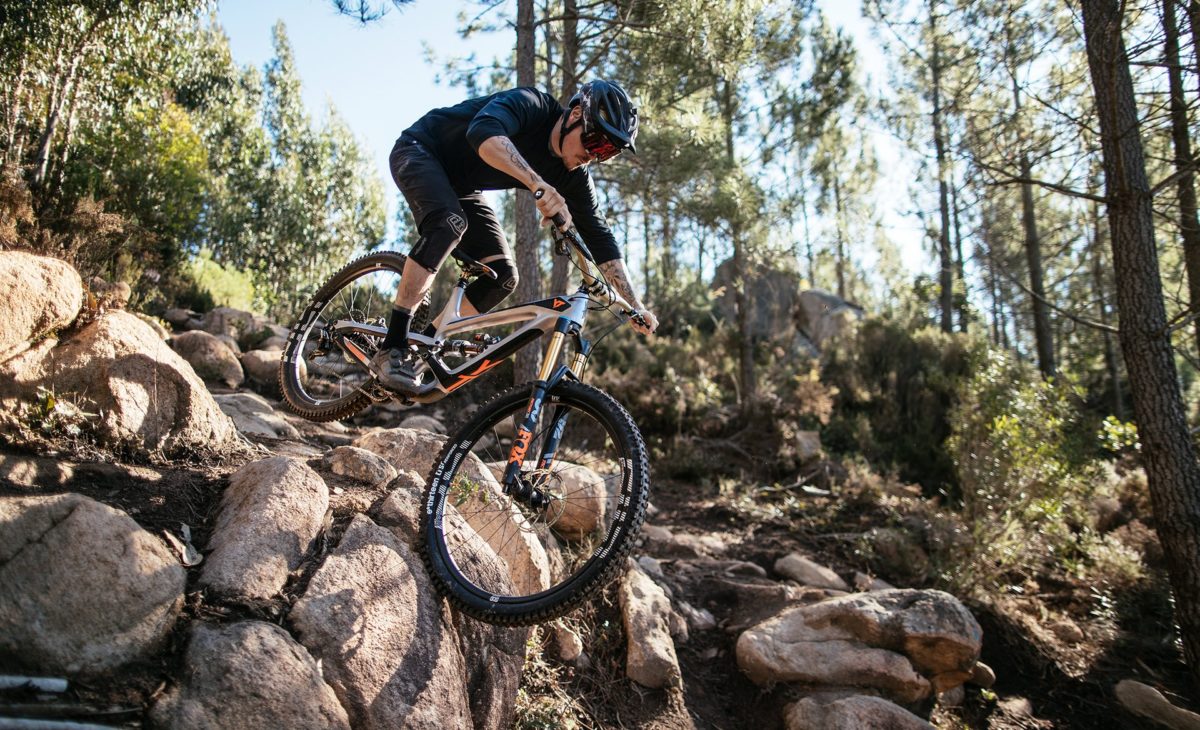 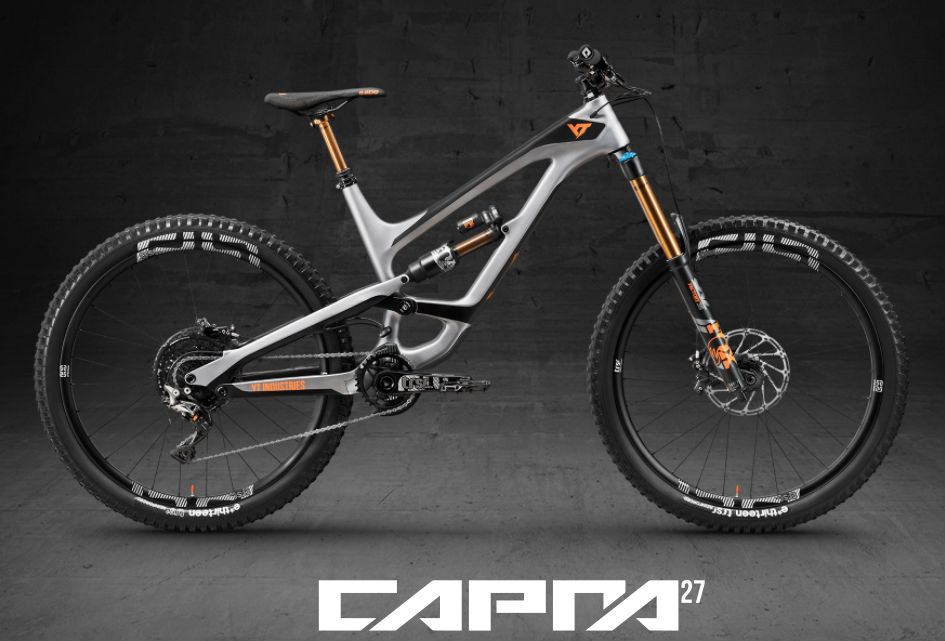 Like the Capra 29, the Capra 27 features tweaked geometry on the Pro Race version, while the less expensive carbon and aluminum builds all share the same geometry. For example, the CF Pro Race provides a 455mm reach in a size-large while the other models offer a 460mm reach. The first chart below shows the geometry numbers for the Capra 27 CF Pro Race, while the second chart shows geometry for all other Capra 27 frames.

The least expensive Capra 27 build–the Capra 27 AL–features an aluminum frame but still manages to include some choice components at such a low price. Seriously, it’s hard to find another bike at this price that offers a better value.

Starting at the fork, YT specs the RockShox Lyric RC, which is a step up from the Yari one might expect to find on a bike at this price point. In the drivetrain department, YT managed to cut costs AND boost the gearing range by going with a Shimano SLX shifter and derailleur paired with the e*Thirteen TRS+ cassette. The result is a drivetrain that offers better range than Eagle, on a bike that retails for just $2,500. Finally, YT throws in an e*Thirteen TRS+ dropper post (many bikes in this price range omit the dropper altogether) and DT Swiss wheels. Claimed weight is 31.1lbs. 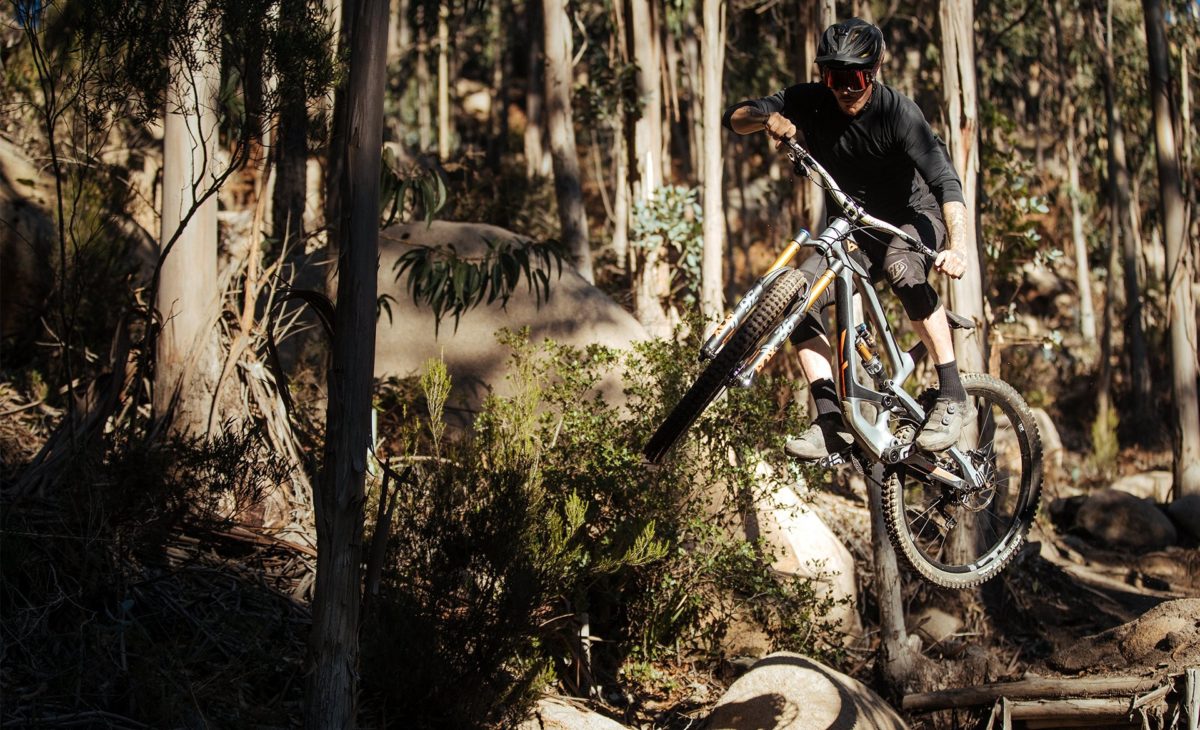 Progression
Sizing Up or Down Plus Handlebar Widths and Crankarm Lengths:...
Gear
Never Underestimate the Power of a Good Zip-tie
Gear
The Maxxis Minion DHF Tire is Still the One to...
Gear
These MTB Deals are Fire, including 40% off Patagonia Dirt...
Subscribe
Login
Please login to comment
1 Comment
Most Voted
Newest Oldest
Inline Feedbacks
View all comments

The aluminum bikes especially offer a great component mix for the price. I haven’t seen any other direct-to-consumer bike that even comes close.