I’ve been using Yakima car roof racks for at least 10 years now – in fact, THE SAME two Yakima racks and 4 bike trays to be precise. Both the racks and trays have held up pretty well despite a few incidents involving low clearance structures and more than a hundred thousand driving miles which is a real testament to the quality of Yakima products.

Anyway, I recently purchased a used Subaru (also my first car purchase in 10 years) and needed a way to throw the bikes on top. The car came with a factory roof rack with two aero crossbars and after initially considering new Q-clips (think that’s what they’re called) I remembered 2leftfeet’s post about the Yakima Raptor Aero, a bike tray that attaches to factory roof racks. Sure enough, Yakima now makes several bike trays that attach to factory roof racks and I ended up with the new Universal Forklift for my ride. 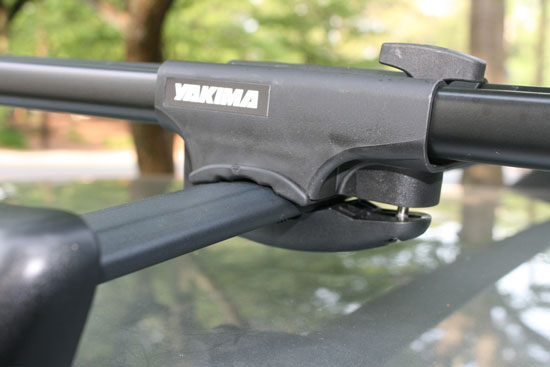 The Universal Forklift is super quick to install and requires zero tools. You could probably get away with skipping the instructions but I’d recommend at least glancing to make sure you’re on track 🙂 Initially my tray was a bit wobbly on the highway but after adjusting the clamps to a smaller notch I was able to get a rock solid fit. To be honest some of the wobble was probably due to the aero bars themselves and if I were hauling two heavy bikes I’d probably face one forward, one backward to balance the load. Some online reviewers complain about wobble and the Universal Forklift may have problems with specific vehicle rack systems – just be sure to buy yours from a store with a decent return policy just in case the tray doesn’t work out for your specific factory rack situation.

Bikes with fat forks and disc brakes are no problem for the oversized fork clamp on the Universal Forklift. The rear tire strap is much improved and easily slides along the length of the tray to accommodate bikes of various lengths. The strap itself is long enough to wrap around even the fattest tires. 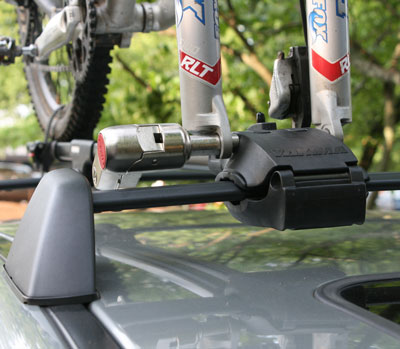 In terms of looks and quality of construction, Yakima has really refined things a lot since I bought my first system 10 years ago. Everything about the Universal Forklift is aerodynamic, buttoned down, and smooth – from the fork clamp action to the plastic pieces that cover every nut and bolt. My old Yakima lock cores fit the new tray just fine, though a few online reviewers claim to be worried about the security of the Universal Forklift. I have two things to say about this: 1. The fork clamp appears no more secure/insecure than the classic Steelhead (the best selling fork mount on the market) and 2. I wouldn’t recommend counting on ANY car roof rack for truly secure bike storage. Integrated rack locks are great for securing your bike in the Burger King parking lot after a ride but if you’re planning to lock your bike to your car overnight I suggest a better solution (like putting the bike INSIDE the car or your hotel room).

Overall the new Yakima Universal Forklift is a great solution at a reasonable price for anyone who already has a factory roof rack on their car. Clearly people have been wanting a factory-compatible bike tray like this for a while now – just last month REI.com was sold out and I had to go to 2 area stores just to find one in stock. Why didn’t Yakima or anyone else think of this sooner!?

Training
Analysis Paralysis: When the Trail Grows Before your Eyes
Gear
7 Mountain Bikes Under $3,500, Tested and Reviewed
Repair
Do you Pressure Wash Your Bike? [Survey]
Trails
The 11 Newest MTB Trails from Around the World [November...
Subscribe
Login
Please login to comment
7 Comments
Most Voted
Newest Oldest
Inline Feedbacks
View all comments

Oh yeah, Yakima is coming along by leaps and bounds. I used to have my Yakima bike carriers attached to my factory racks on my Toyota Sienna and now on my Olds station wagon, but now I incorporated a Yakima roof rack so I could mount up to four bikes on the roof bypassing the factory racks that can only hold 115 lbs tops. Now I can get 200 lbs if needed, and still have use of my factory racks for other things or adventures.

One way or another that is great to hear that Yakima is stepping up their game, with making more universal trays for bikes riding on the roof with out adding a whole new rack system. Kudos to Yakima!

I’ve got to say, I love the bike-side of Yakima’s racks, but where the metal hits the meat, I have a couple complaints. That is, the carriers have been great for us. Secure, flexible, robust. But the mounts to the vehicle. Not so much.
1st, I had a hitch mount fail right at the receiver. Drug 3 bikes for several miles. Cost more than a few bucks.
2nd. Picked up a grand worth of roof rack system. 3 Cobra’s, crossbars and towers. Though I have zero compaints about the cobra trays and crossbars, the Q towers were junk. The bushings in the clamp system and the plastic that the lockbar seats against wore out during the initial fitting. A half dozen cycles on the hinge really shouldn’t wear it out… Especially since they recommend you remove it when not transporting to save wear on the vehicle gaskets.
I might have a different opinion of the Yakima roof system if I’d started with a factory mount point, since the trays seem very solid, but the current years Q towers are junk, and because of that I can’t really evaluate the rest of the system.
Bottom line, the weak link that I can see is the current Q system. The rest looks pretty solid but who knows.

@Xerien – Yakima recommends you remove the Q towers & clips when you’re not using the rack? Ooops – I haven’t removed mine in 10 years! Of course that could explain why I get water leaking in my driver’s side door whenever it rains… Try driving in the rain while you’re leaning on the center console to avoid the waterfall 🙂

“Everything about the Universal Forklift is aerodynamic, buttoned down, and smooth – from the fork clamp action to the plastic pieces that cover every nut and bolt.”

So Yakima is catching up to Thule? ;D

Seriously though, I have a Volvo with factory rails and I looked at both the Yakima and Thule selections and I was able to get a much better fit with the Thule ones. Perhaps that’s related tot he fact that “Volvo” racks at the dealer happen to also be made by Thule…

On your type of car, if you like fork mounts (I can’t stand them and use an upright mount) you should also check out Rocky Mounts. They’re reasonably priced and will attach firmly to just about anything.

I do not understand the removing the Q-Towers & clips when not using the rack??? I do not recall ever hearing this from Yakima, and I have been using Yakima for a long time. Jeff, if your leaking where your clips are at, then something is not mounted correctly or you have the wrong mounting gear. I have never heard of leaking unless something was incorrect or mounted incorrectly. I have a good friend that owns an outdoor shop locally and he has been mounting these racks for years, and he has said the same thing to me. Anyways, I would have those clips checked Jeff to see if they are mounted correctly for your vehicle.

BTW, those Rocky Mounts are pretty good and are universal.

Yeah Mongoose, my weather stripping around the door is probably leaking from something else – this just started in the last year or two. Could have been the times I locked the keys inside and had to jimmy the lock with a coat hanger 🙂

Oh yeah, that will definitely do that every time. Get yourself a shimmy to unlock your car door or just get a magnetic key box and attach it under your frame under your car. If not, just some place that is metal, out of site, and can be reached fairly easily. You know Jeff, weather seal is in-expensive and is easy to replace and put on. Save you from a water fall of water. The Yakima clips are not even supposed to touch your weather seal around the door. Anyways, try that and see what happens bro. I see some drier days coming your way.