I recently had a chance to sit down with Walt Wehner, a mountain bike XC racer and the guy behind Waltworks Custom Bicycles, to talk about local trail use, bike commuting, beer, oh…and building custom mountain bike frames. 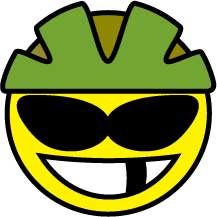 Walt currently builds pretty much any bike frame style that you can think of including road bikes, ‘cross bikes, city cruisers and even 36ers, but the majority of his builds are 29er mountain bikes, both full suspension and hardtail.

About 8 years ago, Walt thought he might like to try his hand at building his own bike frame, and several friends also expressed interest in having a frame built. He got a deal on a frame jig and was promptly laid off from his day job as a technical writer. Waltworks Custom Bicycles was born!

The entire company consists of Walt, his dog, and a cluttered one bay garage in front of his house in Boulder, CO. There is no CAD computer. No CNC machines. Just the aforementioned jig, a lathe, welding stuff, and some hand tools. He designs his frames in a spreadsheet with some “fancy macros” he wrote, on a Macintosh computer that dates from the first time Steve Jobs worked at Apple. With this setup, Walt turns out about one frame per week. 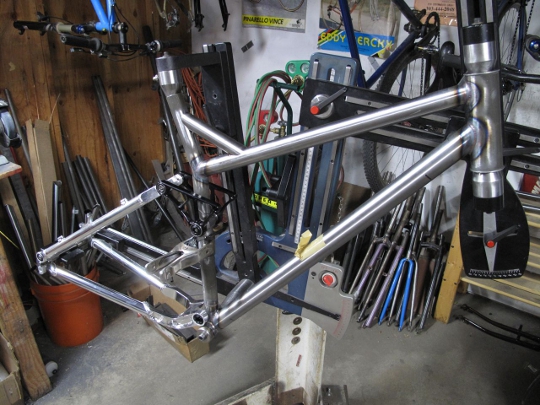 ST: Were you a welder before you got into frame building?

WW: No, and I’m mostly self taught. I did take a couple of welding classes at CU, but they mainly focused on how to avoid electrocuting yourself.

WW: Sort of. I also love to cook and what I would really like to do is open a bed & breakfast some placelike Bend, OR or Santa Fe, NM. A customer could come out for a week with their current bike and we could go ride all day. We would spend the evening eating and talking about their new frame. I could weld it up and have the customer take it out for a ride. I could then adjust it as needed, or even scrap it and start a new one. After the customer is completely satisfied with their new bike, I would finish it up, get it painted and ship it to them.

ST: Why do you choose to work with steel?

WW: I find steel to be easier to work with than aluminum. Ti is a little bit lighter, butphenomenallymore expensive. I’m also guaranteeing these for life, so I need to use a material that I’m confident will last and that I can repair if needed.

ST: Custom frame shops seem to come and go. How have you stayed around so long?

WW: Anybody can learn to weld a decent frame. The trick is managing the business aspect. When you start out $20,000 or more in debt from buying equipment, it takes a lot of frames to break even. I paid cash for my equipment and I keep my operating expenses low.

ST: What is the lead time for a new frame?

WW: Right now it’s about six months. I wish it was more like two months. I hate it when Idiscussa frame with a customer and then forget what we talked about by the time I get ready to build it. We have to start the dialog all over again.

ST: How would youdescribeyour bikes?

WW: I’m no artist, but I suppose I am acraftsman. My bikes aren’t bling-y, and my welding isn’t beautiful. My real goal is to build a bike that will disappearunderneath you. You shouldn’t be thinking about the bike at all, just the ride.

Custom steel mountain bike frames aren’t for everyone, but at $1,250 for a hardtail or $2,150 for a full suspension (with Fox shock and Ventana rear triangle) they are well within the price range of the high end assembly-line stuff at your LBS. If you’re hard to fit, have a novel geometry idea you want to try out, or just want something different from the rest of the weekend warriors, then head over to Walt’s website and drop him a line.

As a self-described “bike geek who loves making stuff for other bike geeks” he will answer your email, and he loves to talk about beer, vegetarian recipes,local trails and bikes. If you’re local, Walt is usually up for a ‘ride’ to Avery’s Tap Room or you may even talk him into an actual mountain bike ride. 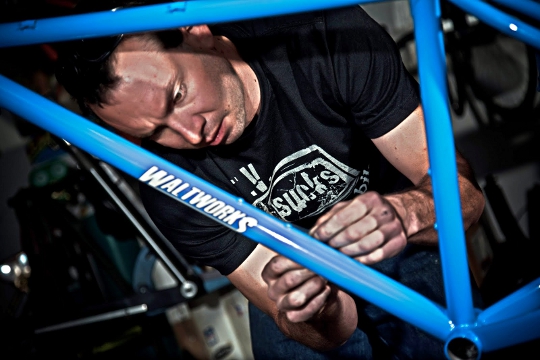 Thanks to Walt for giving up a couple of hours to chat on a Sunday afternoon. (All photos courtesy of Waltworks).

Progression
Sizing Up or Down Plus Handlebar Widths and Crankarm Lengths:...
Gear
Never Underestimate the Power of a Good Zip-tie
Gear
The Maxxis Minion DHF Tire is Still the One to...
Gear
These MTB Deals are Fire, including 40% off Patagonia Dirt...
Subscribe
Login
Please login to comment
2 Comments
Most Voted
Newest Oldest
Inline Feedbacks
View all comments

Enjoyed the post! Walt makes some cool bikes, and seem like a genuinely good dude. He’s on the MTBR Framebuilding sub forum, and he’s never shy about offering advice to new builders, lota builders wont do that.

Enjoyed the article. Thanks.