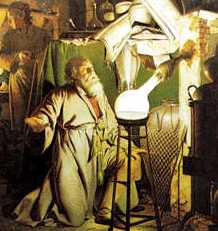 Ancient alchemists were pretty weird dudes. For example, in 1669 Hennig Brand was searching for something called the “Philosopher’s Stone,” which is not a Harry Potter novel. The Philosopher’s Stone was said to be able to turn lead into gold. In his efforts to find the stone, Brand hit upon the idea to boil urine.

Brand never did find the Philosopher’s Stone, and he was born 300 years too early to get to read any Harry Potter novels. But he did boil pee until all the water evaporated and a glowing solid was left behind. Brand had discovered the element “phosphorus,” which was a major scientific achievement. But I think we can assume that his house did not smell good.

The high cost of science

Yes, science sometimes has a price. Sometimes people don’t understand. Sometimes you smell like pee. But in the end, without science, we’d never have invented carbon fiber mountain bicycles. Which is why a carbon fiber bicycle company from Colorado has named itself Alchemy, to give a nod to our scientific forebears like Hennig Brand.

Here’s Alchemy’s hardtail 29er, called the “Oros,” which I rode at Outdoor Demo last week. Believe me, it has a price too, but I’ll get to that later. 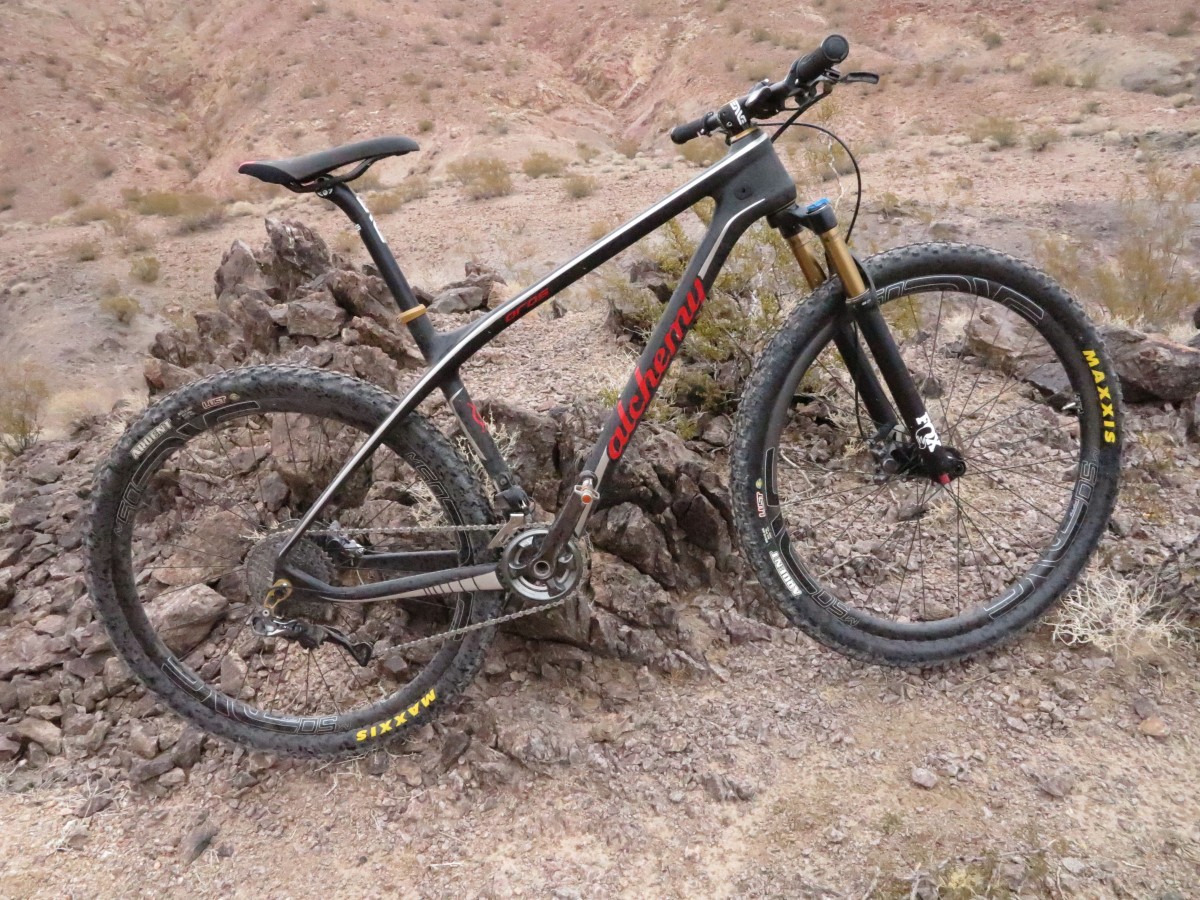 The word “oros” has a couple of meanings in a couple of languages. In Spanish, it means “gold coins.” But I think we can assume that Alchemy has chosen it for its greek meaning, which is “mountain.” Let me tell you, all pee jokes aside, the Oros is one mountain of a mountain bike.

Here it is in its cover shoot-style photo. If you can look at this bike and tell me you don’t wish you owned it, I will call you a liar, a churl, and a charlatan. And I’ll call your mom and tell her the same. 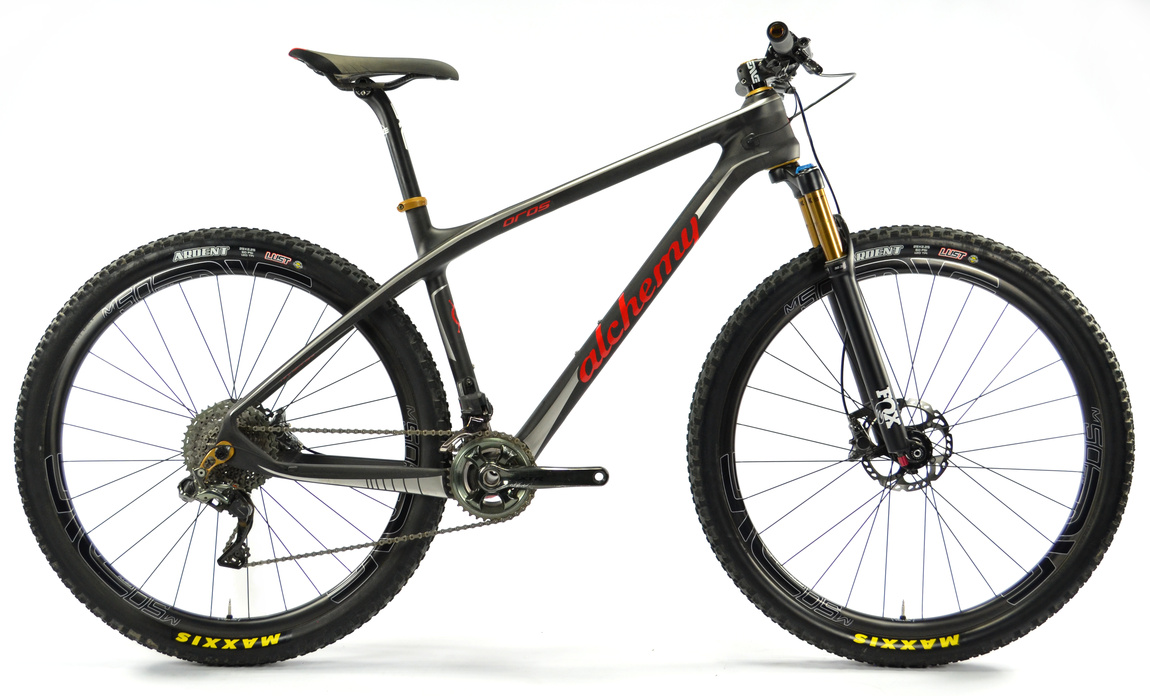 The test bike I rode was spec’ed higher than the Pope’s daily driver. It had an XTR Di2 drivetrain, Enve cockpit and wheels, and the Fox 32 Float 29″ fork with very understated decals. I rode the Oros after spending the morning riding fat bikes. To climb on board this XC race machine after the fat tires was absolutely amazing.

Even the rain couldn’t diminish my fun. Wait, raining? Isn’t this a dang desert? 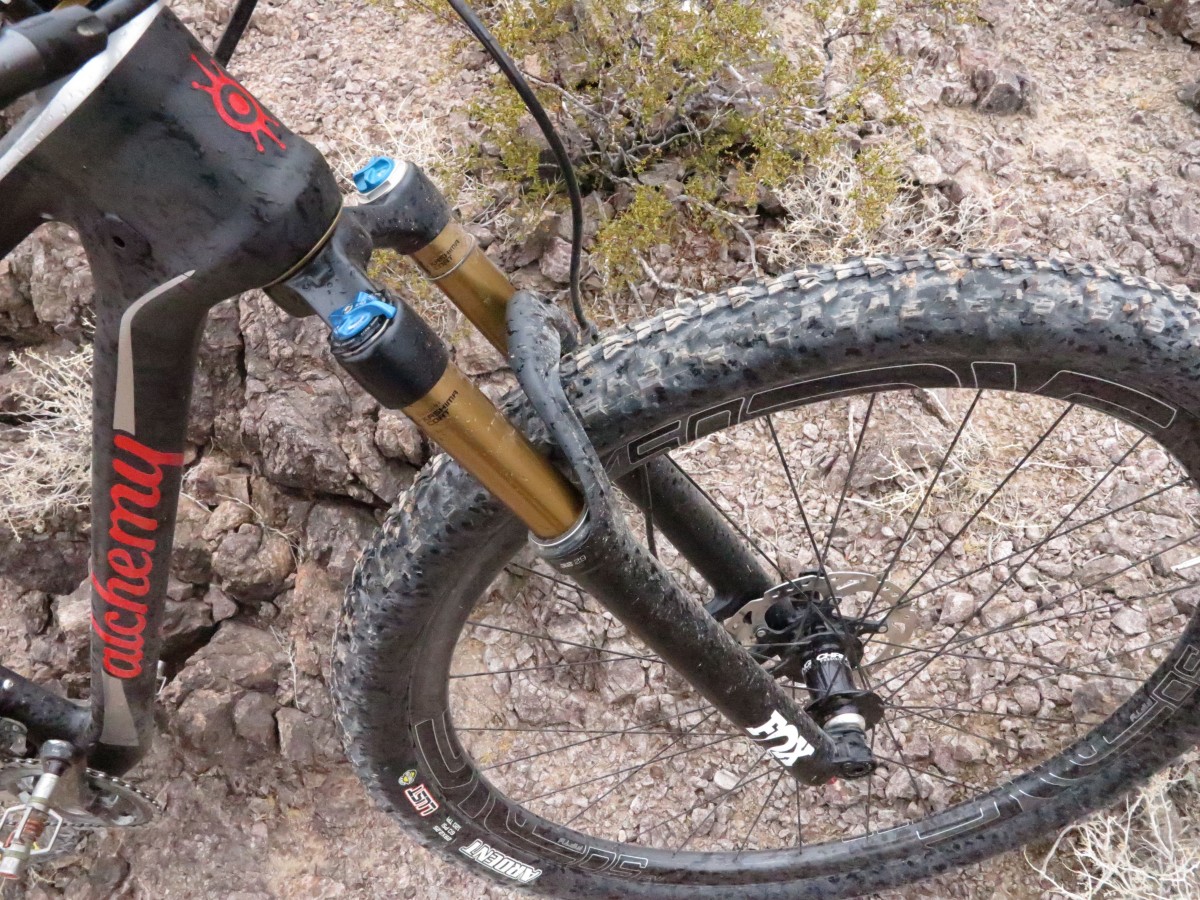 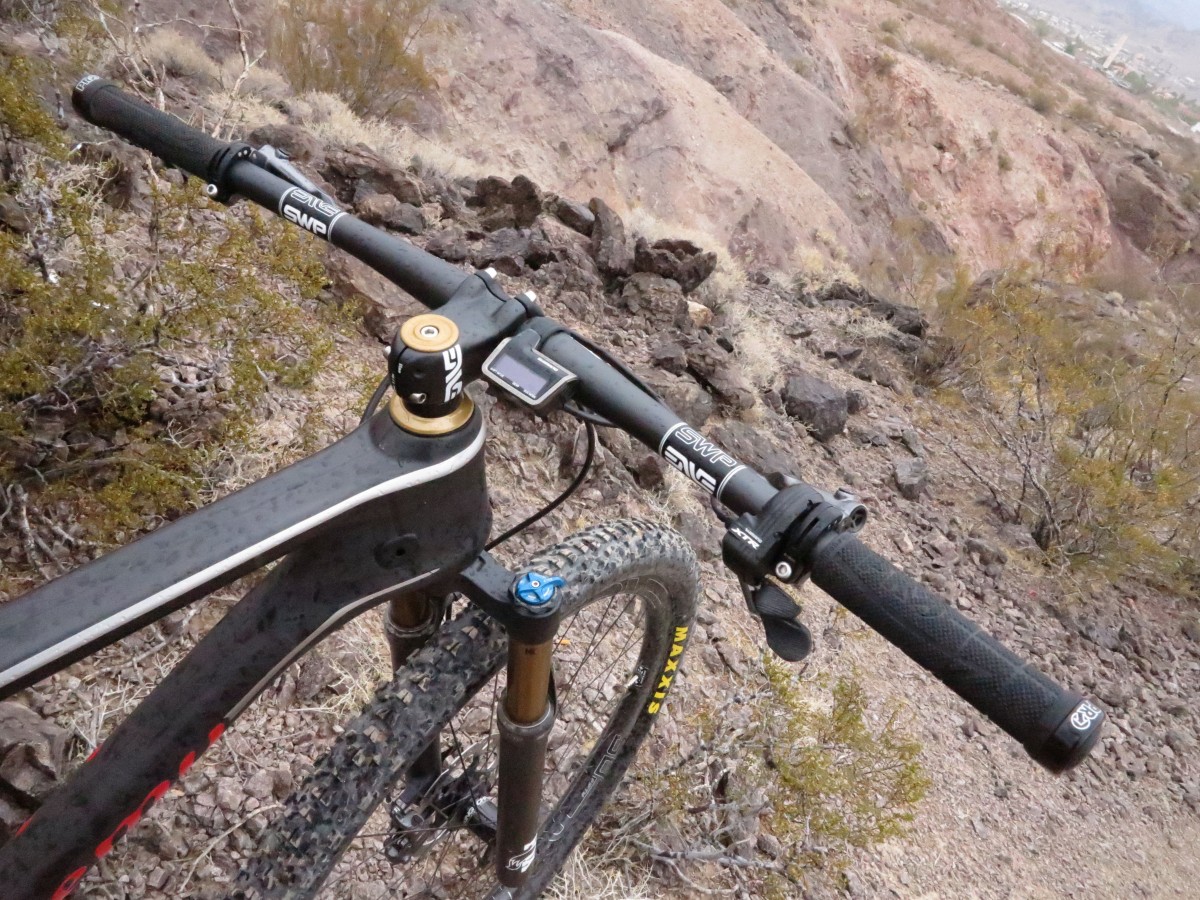 And here’s the drivetrain shot. As you can see here, I am in big/big which is a gear combo one should never be in, ever. But in my defense, I believe the Di2 was set up to ignore the small ring, sort of like a poor man’s one by drivetrain.

Well, not a poor man’s, obviously, because you’ll need a wallet thick as a fat bike’s tires to get one of these rocket ships into your garage. 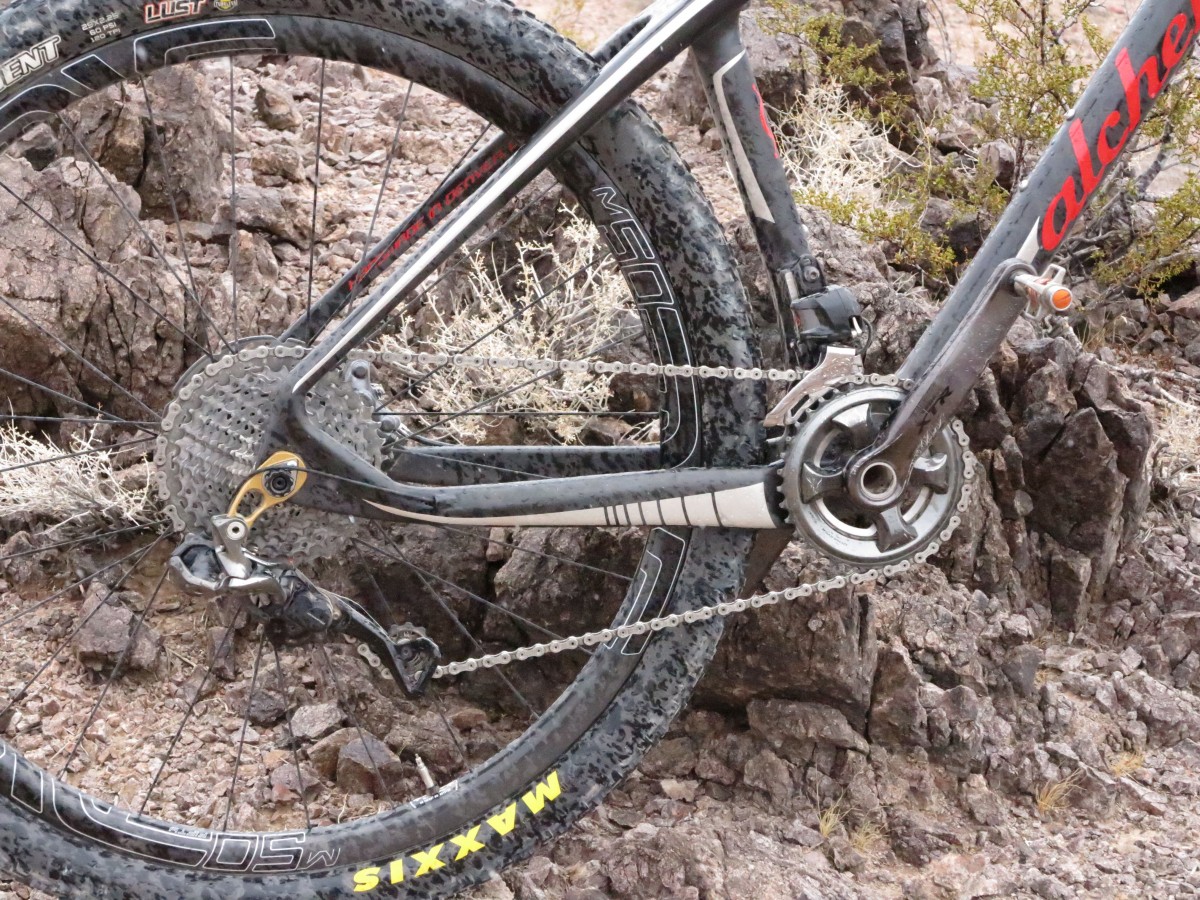 There really isn’t a component on this bike that you could point to and say, “You know, I think Alchemy could have chosen something higher level here.” Which is all fine and well, because they’re a handmade-in-the-USA custom carbon bicycle company. Well, the road bikes are custom. The mountain bikes are set sizes. But they’re still handmade in the USA.

I loved everything about this bike. I loved the paint job, the high spec level, the stiffness, and the speed. But the best of the best does come at a price. For a frameset, Alchemy would prefer to have 3,750 of your dollars. As of this writing, their price sheet is a little confusing, and does not include the Oros, but I think you can count on a price tag inching up toward $10,000 for an Oros like the one I rode.

If you’re in the market for a maximum-effort, wallet-roasting, pee-boiling XC race machine, the Oros is definitely something to look at. And the guys who run the company are groovy dudes as well, based on hanging with them briefly at Interbike.

If you like all the above, but want it in a full squish platform, good news: because Alchemy announced the Arktos (a centaur in Greek mythology, also could be “bear”) at Interbike. Me wantey. Me wantey! 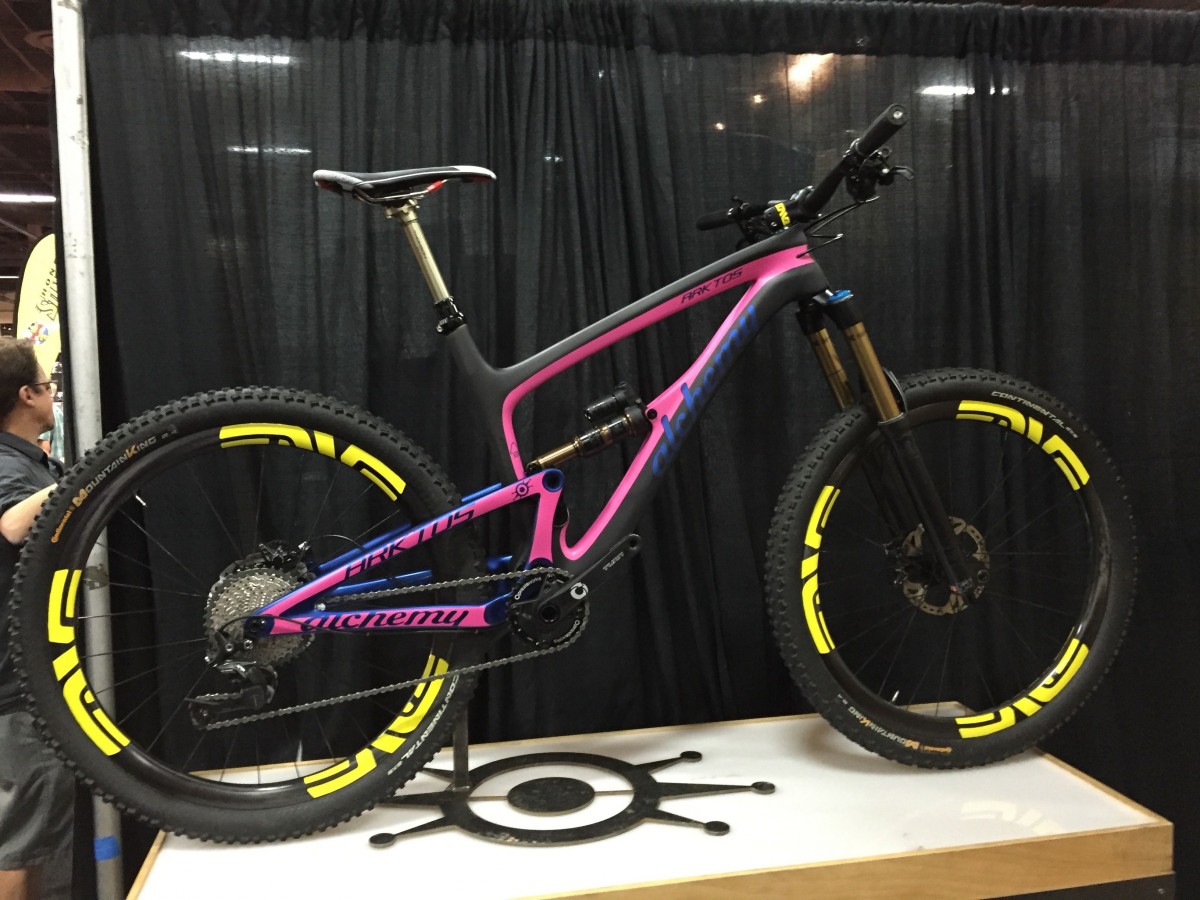 Just got off the phone with Ryan at Alchemy. In addition to complete bikes, they will be offering the Oros in frame-only for $3250 with a claimed weight of around 1200g.

For more on the Oros, check out Alchemy’s web site here.

Gear
The Maxxis Minion DHF Tire is Still the One to...
Gear
These MTB Deals are Fire, including 40% off Patagonia Dirt...
Progression
Sizing Up or Down Plus Handlebar Widths and Crankarm Lengths:...
Gear
Never Underestimate the Power of a Good Zip-tie
Subscribe
Login
Please login to comment
3 Comments
Most Voted
Newest Oldest
Inline Feedbacks
View all comments

That’s one expensive hardtail. How much do you reckon it weighs?

Yes, how many Erlenmeyer flasks of pee is it equal to?