Hi, my name is James, and I’m a bagaholic. [Hi, James.] People say it’s weird to have a deep physical connection to an inanimate object. To those people I say “shut up” but also “do you own a Boreas Erawan? Because if you did, you’d understand.” Lastly, I tell them to shut up once again, just to be sure they got the message.

Before I delve into the Erawan’s many features, let’s set the stage with a chat about the venerable North Face Base Camp Duffel. It looks like this: 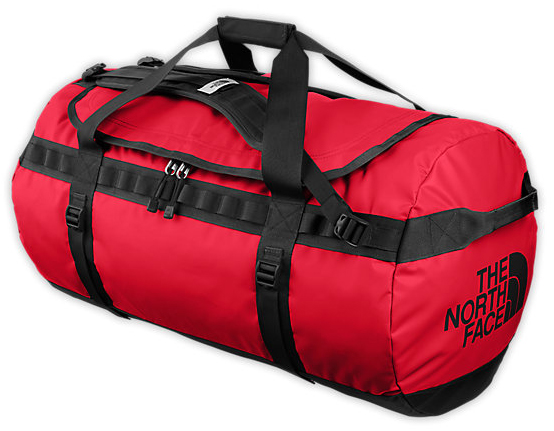 The Base Camp is a great piece of gear. Mine has been to Africa and Europe, and has held everything from underpants to Nalgenes half full of pee. It has extremely sturdy construction that shows no signs of wear even after everything I’ve put it through. In short, this bag is tougher than chicken lips. It’s like the US Army Humvee of bags.

The only problem, as I think many people who purchased a Humvee for daily civilian use found out, is that as tough as it is, it doesn’t have all that many comfort features that would make it ideal for daily use.

What if you wanted a bag with some of the cool toughness of a Base Camp, but with some features that would make it the best adventure travel slash commuting duffel ever known to mankind? Into that feature gap in the adventure travel duffel market plunges the Boreas Erawan.

When I saw this bag on the Outdoor Retailer show floor, I emitted such a piercing squeal that a hawk swooped in the door and attempted to mate with my face. That’s how excited I was. The hawk was pretty excited too, but we’re just friends.

Mind you, neither bag is really waterproof, but you could set your Base Camp down in a puddle and expect the contents to be dry. You wouldn’t get that with the Erawan, because three sides are nylon, but what you do get is a rubberized back panel that will protect your gear from getting mud and water slung up on it while you’re commuting via bike in the rain.

And the Erawan does have a waterproof pocket. Not water resistant, waterproof. It’s not huge, but it’s big enough for your phone, wallet, keys, and maybe a sandwich. You know, important stuff.

There’s also a separate compartment that’s great for stowing clothes that you don’t want to touch the clean clothes in your main compartment. It’s big enough to fit a pair of my running shoes, and my feet are so floppity that when I go to the circus the clowns point at them and laugh.

Here you can see the big separate pocket is just big enough to fit my helmet.

And the bag looks great next to my skinny tire mountain bike.

My favoritest features of all, though, are the really clever bits of the Erawan. As shown above, the North Face Base Camp bag comes with shoulder straps so it can be worn like a backpack, like the Erawan, but they attach via straps through buckles. You can take them off, but it takes a minute or two, and if you’re anything like me you’re likely to immediately lose one of them.

The Erawan’s straps, however, are attached permanently on one end so they can’t be lost, but they also stow behind a corrugated panel. Oh, and that corrugated panel also helps air get to your back while you’re wearing the bag so you’re less of a sweaty heap when you arrive at your destination.

On the other end, the shoulder straps attach by way of a carabiner through these loops that are otherwise hidden. Boom! And you can choose how high or low the straps attach. Pow! And there’s a chest strap too. Fweet! That boom and pow are the Erawan blowing your mind. Twice. The last sound is me using a kazoo. I just like kazoos.

I love everything about this bag. It’s seriously the best. It even has little magnets sewn into the material to keep the flap of the gigantic main zipper stowed down.

Research and Design is costly, and even if you can afford the cost, it’s still a gamble to add features. That’s why so often products come out that have basically the same old same old features, and why it’s so cool when a company like Boreas not only strikes out in some new directions, but chooses clever and cool directions when they do.

The Erawan comes in at $149 for a 50l capacity model like the one I have, and $159 for a 70L model. It’s a little pricier than the Base Camp at similar volumes ($135 for a 70L Base Camp, which they call a medium), but if you’re looking for a bag to use every day, be it for commuting or adventure travel, I think the Erawan is the choice.

In summary, here’s my Erawan wearing a hat. I bid you good day.

Thanks to Boreas for sending the Erawan Adventure Travel Bag over for review!