In the end the total cost of this build came to $297CAD (about $210 in US dollars). The fact that I could come in this low for a semi-decent bike came as much of a surprise to me as it was to Sharon (my wife) who wonders exactly when this thing will break, where it will break, and how much skin I will leave on the dirt when it does break.

In summary this was the result of bit of work, a bit of time, a lot of dumpster-diving, a bunch of accumulating spare parts in bins, and inspiration from cheapskates the world over. Spare parts came from local bike shops, Facebook Marketplace, Pinkbike, Craigslist, and Ebay. A special shout out of course to Obsession Bikes of North Vancouver (Matt, Topher, John and Lou), BicycleHub (Dave and Stoyan), MaguraUSA (Jude and Ken), and everyone else who helped me express my need to save money and be cheap!

Here’s a run down of the key Dumpster Bike build parts, along with some notes. 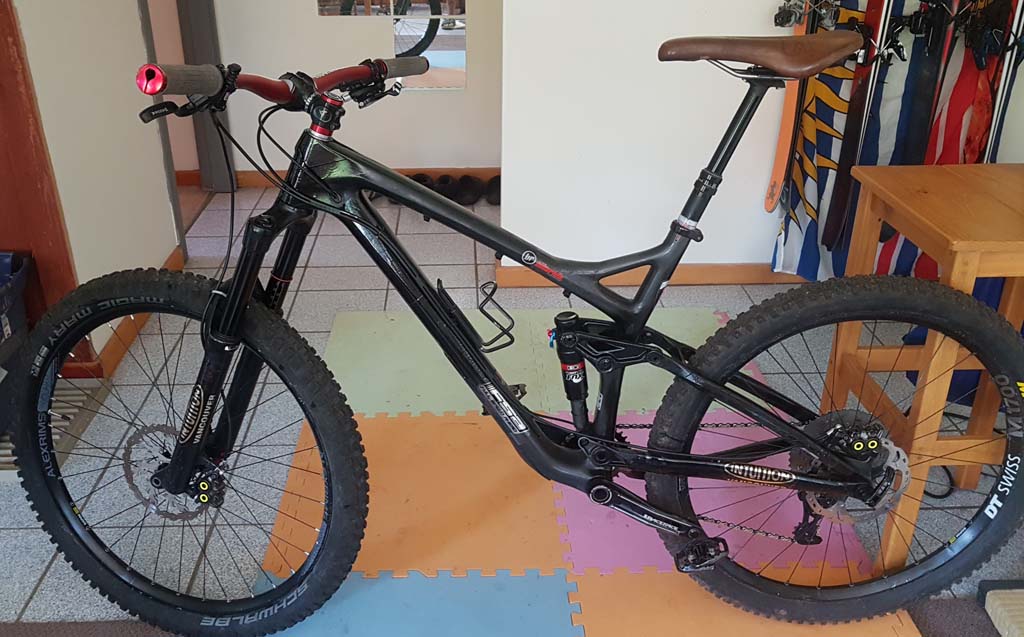 The most satisfying part of this process has been putting all these potentially dumpstered “things,” (frame, parts, accessories) to good use once again. It’s always struck me as abysmally hypocritical how the mountain-bike industry greenwashes itself as being environmentally conscious, yet through planned obsolescence, a lack of spare parts, and poor design have made it pretty hard to go through an exercise like this. And by “exercise like this,” I mean buying a frame, getting some parts together, and putting together a functional bike.

Not everyone will have the access to the dumpsters that I had or a massive Box O’Junk. But if you have the inclination and the time (I don’t watch much TV, which frees up a lot of it), maybe you can do something about the high cost of bikes.

Nice work! I have built my last two bikes from parts. I would not have a bike any other way.

My previous 2 “dumpster” builds were

Rocky Mountain Slayer rescued from neighbour with some forks rebuilt, new brakes, new handlebar and stem then given to a broke trailbuilder.

Inspirational. Yesterday my wife asked if we wanted to get a cheap bike to work on and I said no. Changed my mind because of this. Hopefully it is still available and my dad will have a better bike to ride soon.

I am all about repair not replace. Just had by rear wheel repaired rather than replace, when my derailleur attempted murder-suicide. Sadly the derailleur was beyond hope, but I did save the jockey wheels. It is frustrating to pay $45 to have spokes replaced and wheel trued but I don’t have those tools yet and didn’t even know spoke length. I suppose the wheel is worth more but to me it is worth $50 because I bought the set for $100 when Performance Bicycle went under.

vapidoscar – do it. It surely can’t hurt to try

C’mon! Most of us still run 11 speed and honestly it’s enough range.

Zoso – that should have been “obsolete”. I could have worked a bit cheaper and scavenged some “obsolete” 10 speed as I later found some free 10 speed XT derailleurs and 10 speed One Up component 42 tooth rings

As long time mountain bikers, my Wife and I wanted to try gravel bikes. After a bit of soul and wallet searching I built one out of an old hybrid bike frame from the 1990s. It is interesting how far we have come, and how far we haven’t. As it turns out there just isn’t much wrong with a properly assembled steel gravel bike made from old bike parts. I bought a new gravel bike at a business closing sale and we have set now for less than $500. I’m willing to admit that part of the enjoyment of mountain biking for me is the shiny new things new technology. I also enjoy being frugal sometimes, and I enjoy my crusty bike too.

would love to see how many miles you can get out of frankenstein’s bike! shred till ur dead! haha my guess is that A) the swing-arm will fail at some point due to the rammed copper insert at the pivot or the boosted wheel in a non-boost frame or B) the rear wheel is going to get trashed. would love to see an update later!

This isn’t directly related to the build, but I have to ask: What shorts/ knickers are you wearing in the shot overlooking Pemberton? (the tan shorts)

Chris Albert – they are MEC capris. Fixable with gorilla tape for budget purposes as an added bonus

Why is the 11 speed stuff obsolete? 11 speed continues to be made, and nothing new (Boost, pressfit BB, tapered headtube, etc) prevents anyone from using 11 speed on any bike from the last… at least 15 years; and into the foreseeable future, nothing about 12 speed or the oncoming 13 speed prevents someone from “downgrading” to 11 speed…

Justin White – “Why is the 11 speed stuff obsolete?” Duh – cos industry and Pinkbike comments say as much so it must be true

Good 4u Lee! I really admire those that are that resourceful.

I literally paid 10 times the amount for my used 2017 Trek Fuel (including some upgrades/alterations) and it sports similar geometry to your Remedy and probably performs about as well. This is a very cool ride. I’m also making due with the ‘obsolete’ 11 speed drivetrain… 🙂

Brad Beadles so far so good. 12 rides locally in the Sea to Sky. 8 rides in Moab/Hurricane area.

– Cranks came loose but that was me not torquing hard enough. Torque till it strips then back off a 1/4 turn I say

– Main pivot developed some play. Disassembled further. Jammed a split ring plastic washer onto the metal sleeve that’s press-fit bonded onto carbon frame (that was the play). Mixed up some JBWeld and smeared it into every crevice. Hit the whole gumbo with more black spray paint to keep it looking tight and we’ll see. So far that’s 20 more rides then this thing would’ve had in the dumpster

Been doing this for more than a couple of decades and recently stopped because I can afford new bikes. The drawbacks were mainly 1) regular catastrophic failures, 2) no warranty, and 3) a questionable amount of time sourcing and repairing/modifying/retrofitting quality parts. The failures seem to always come when I was riding hard, like in the occasional race. Or when I was having an epic day of progression. The warranty thing can be nice, but sometimes (looking at you, Trek) the warranty means nothing on new bikes and parts. And I probably could have focused more on making two or three times (or more) the amount of money I saved piecing bikes together. But then I’d be working more, riding less, and a little more fat.

Nice work!
Interestingly I believe this particular frame came through our shop first – when we noticed the problem with the pivot we suggested the customer see if obsession could warranty it for him. Hopefully that worked out!

Nice hack with the copper tubing. I’d totally be comfortable doing that on my own bike, but it’s not something that we can do as a professional shop in reality (and you understand that I’m sure). It’s for sure an ethical dilemma because as you say, the mtb industry really isn’t as green as it would appear from the outside, but we do our best to recycle all that we can.

Anyway sweet build, I’ve a couple of similar builds in the works! (FYI I’m on the hunt for a 26″ QR disc rear wheel if you happen to pass by anything nice 😉 )

Love this article!! Wish their are more resources for people wanting to do similar things to share ideas and ask questions. For example, need details on how to fix the an ovalized pivot, rebuild a brake caliper or shock for cheap, etc.

Bryan K Sell – definitely not something for the fainthearted and totally acknowledge there’s turnkey satisfaction to new bikes. Rebuilding dumpster bikes is just a different kind of satisfaction

Sam James. Not only would a shop not touch this for the reasons you mentioned it just wouldn’t be cost-effective. The ROI would be valued in pennies on the hours spent. I do have a 12×142 beater 26″ wheel with DT rim and Onyx hub if you need it?

That is great. I would have enjoyed making that. You did get ripped off on the green Locktite though. Should be $7.50.

I absolutely love this kinda stuff. It would probably be even easier (cheaper?) to do with a hardtail, but still fucking great work!

I’m really surprised that the shop threw out the frame without saving the shock. That’s a valuable part.