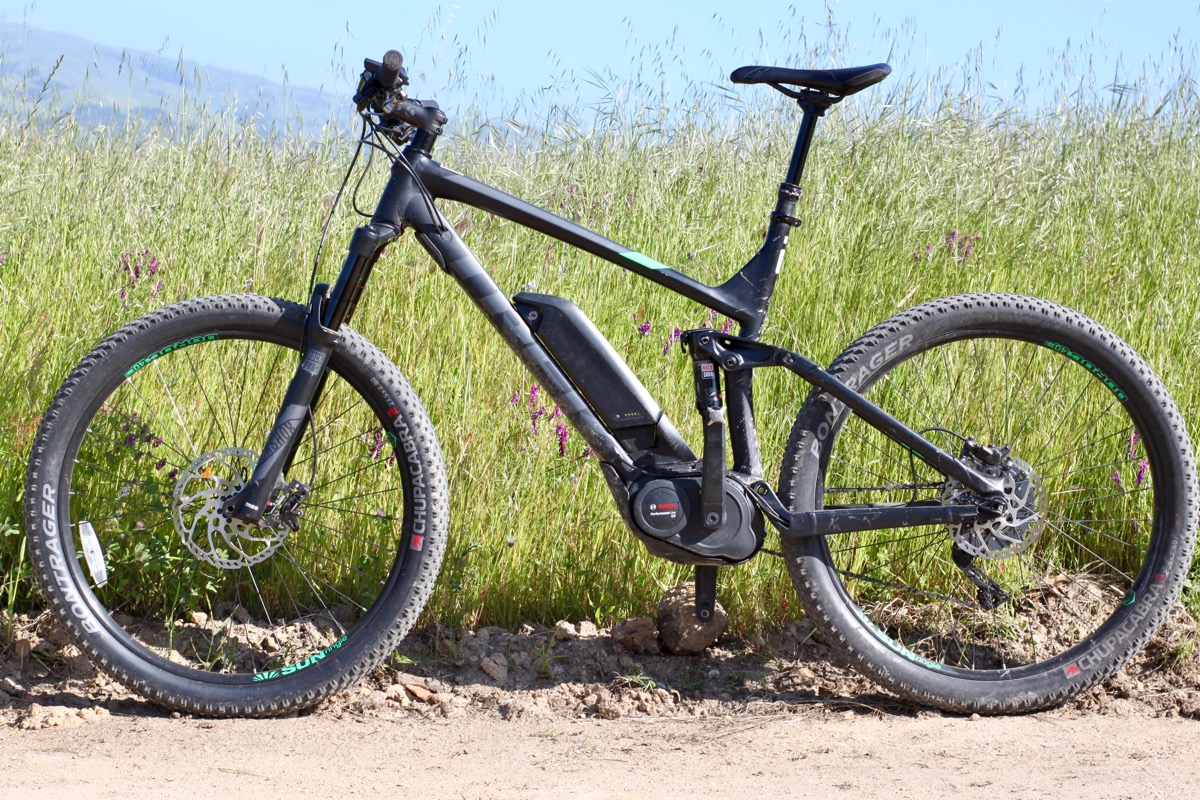 It’s been nearly four years since I’ve ridden or reviewed an electric mountain bike, so at Sea Otter last week I decided it was time to give it another shot. I chose to test the Trek Powerfly 8, a full suspension mountain bike fitted with a Bosch CX Performance e-bike system, and here is what I learned. 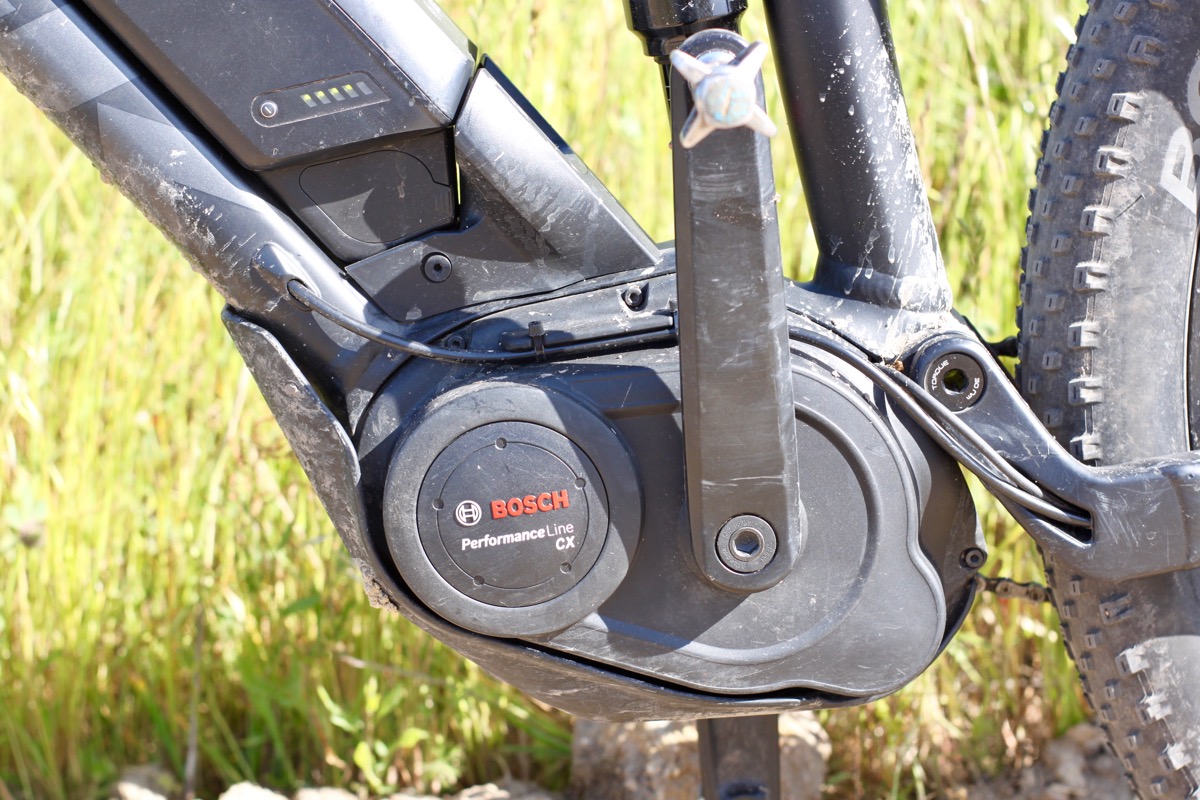 The aluminum Trek Powerfly 8 offers 130mm of suspension travel front and rear, with a RockShox Yari fork up front and a RockShox Deluxe RL in the back. An 11spd XT drivetrain, Shimano hydraulic disc brakes, Boost spacing, 2.8″ Bontrager “plus tires,” and KS eThirty dropper post are included, giving this bike a pretty legit component selection, comparable to what one would expect to find on a “standard,” mid-range mountain bike. But the Powerfly 8 doesn’t stop there, adding a Bosch CX Performance, 250W motor and a Bosch Powerpack Performance 500 battery.  The Bosch motor is pedal-assist, and power output is restricted once the rider reaches 20mph. 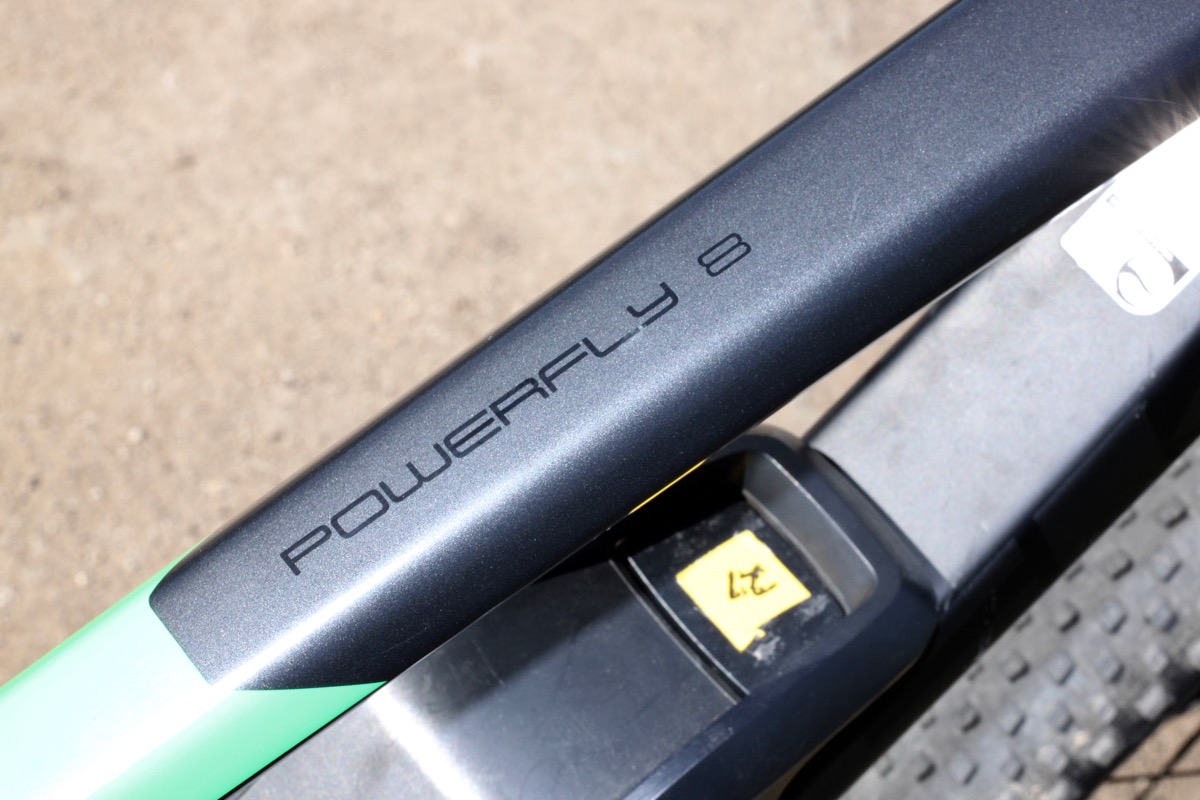 Trek notes on their website that the company’s “MTB legacy makes Powerfly a true mountain bike,” though some riders (and land management organizations like the BLM here in the US) might disagree. 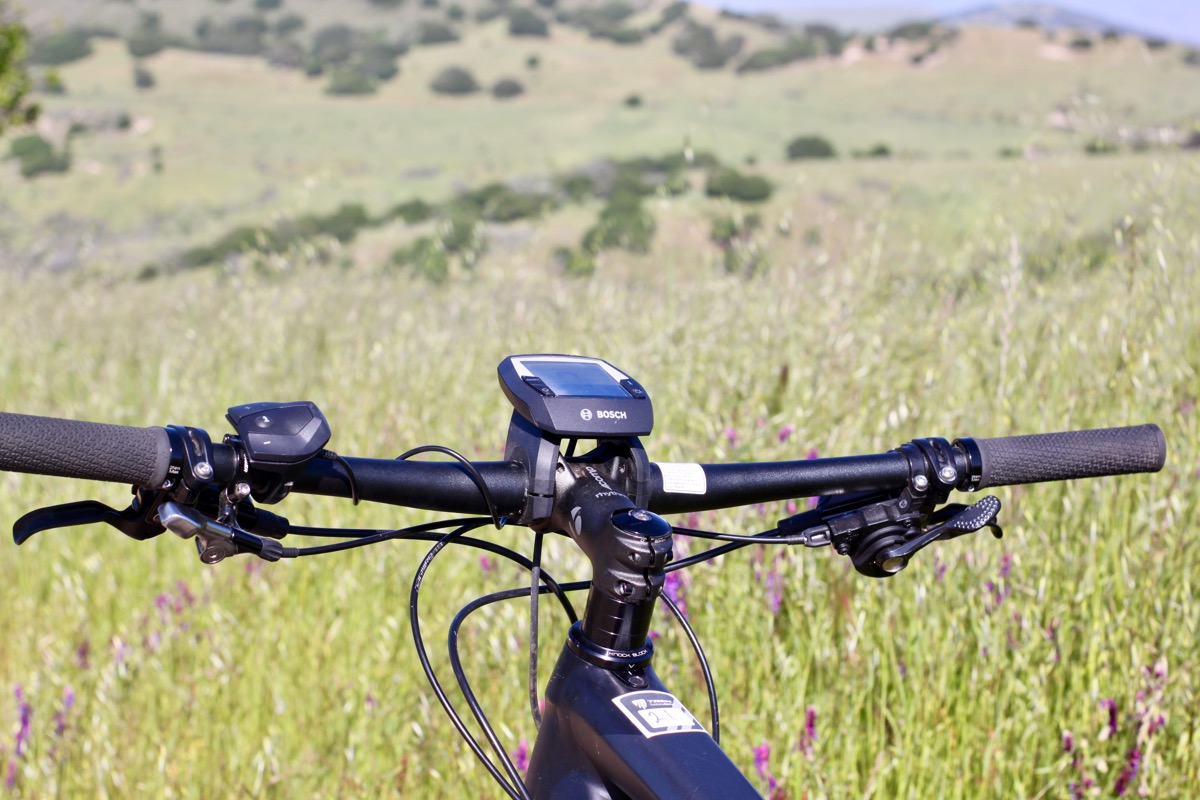 While Sea Otter offers a short test track for electric mountain bikes, I chose to take the bike out on the trails at Fort Ord to get a better feel for the bike. At the time I had no idea that e-bikes are not allowed on the BLM-managed trail system at Fort Ord–and clearly none of the e-bike vendors at Sea Otter were advertising this inconvenient truth. So blissfully unaware, I set out on a 10-mile test ride across both doubletrack and singletrack.

The best singletrack at Fort Ord is located about 3 miles away from the Sea Otter venue, and to access it one has to ride a boring, exposed fire road with some fairly stiff climbs thrown in. Most riders would probably agree this part of the ride isn’t a lot of fun, especially in a headwind. For this reason, the Trek Powerfly 8 felt like a Tivo remote capable of skipping boring commercials to get me to the show I actually want to watch.

Riding singletrack aboard the Powerfly 8 was fun, though it felt a lot like riding a budget full suspension mountain bike: heavy, a bit awkward, and not super responsive. Sure, I was able to bunny hop the bike and it cornered fairly well, but it wasn’t nearly as much fun to ride as say, the Fuel EX 9.8 which I tested a few months ago. (Coincidentally, both bikes have the same MSRP: $4,999 USD.)

On the 700-vertical-foot, 3-mile fire-road climb back up to the demo area, I took full advantage of the electric motor and absolutely blew past other riders making the same, boring slog up the hill. Make no mistake, I was working hard with my heart rate pegged near the limit, sweat dripping off my brow. But the electric motor allowed me to finish the climb more than twice as fast as everyone else.

Speaking of everyone else, 100% of the looks I received on that climb were dirty. I could almost feel the daggers being directed at me through riders’ eyes as I blew past them. I was so aware of this that I actually found myself apologizing and explaining that yes, I was in fact cheating that day. Or maybe they knew, unlike me at the time, that electric bikes are banned in that area.

I ended up testing four different e-bike motor systems that day, and the Bosch system included on the Trek was one of the two loudest motors I experienced. Not only that, the motor tends to add noticeable drag on the descents. The Bosch CX does deliver impressive torque, though it’s not always smooth when transitioning from a static pedal position.

Looking at GPS data collected during my test ride, I can see that my top speed was close to 40mph. This may sound surprising since electric mountain bikes, including the Trek Powerfly 8, are regulated to a maximum speed of 20mph. As my test ride illustrates, it’s certainly possible to get above the maximum speed, but the motor is no longer adding power to the drivetrain beyond 20mph. My overall average speed during the test–13mph–is about 30% higher than what I might expect to average on a similar ride. This just so happens to line up with the lowest level of power assist offered by the Bosch motor, which is 30%. (Turbo mode adds a whopping 300% to the rider’s power, though to conserve battery life I minimized my use of this level of assistance.) 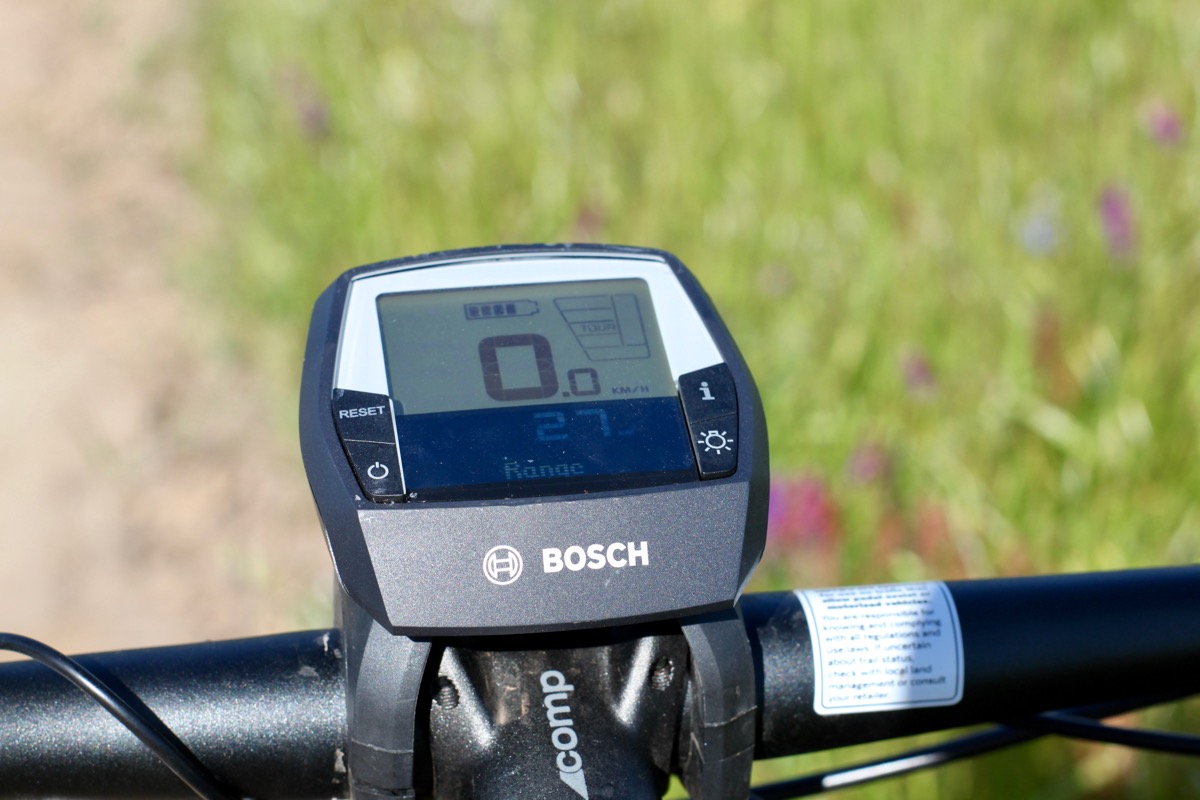 One thing I hadn’t anticipated during my test ride was how the battery life indicator would affect me mentally. I felt genuine battery-life anxiety during the ride, worried that I would be forced to pedal the 50+ pound Powerfly 8 up the hill under my own power. Thankfully I made it back with battery life to spare, but thinking about my bike the way I think about my smartphone battery took some fun out of the ride for me.

Is an electric mountain bike like the Trek Powerfly 8 for me? No, but that’s not to say it’s not a good choice for other riders, as long as it’s ridden in places where e-bikes are allowed. These are still early days for electric, pedal-assist mountain bikes, and chances are the bikes will continue to evolve and improve.

Progression
Sizing Up or Down Plus Handlebar Widths and Crankarm Lengths:...
Gear
Never Underestimate the Power of a Good Zip-tie
Gear
The Maxxis Minion DHF Tire is Still the One to...
Gear
These MTB Deals are Fire, including 40% off Patagonia Dirt...
Subscribe
Login
Please login to comment
4 Comments
Most Voted
Newest Oldest
Inline Feedbacks
View all comments

Nice write up. I recognize the potential threat that these bikes pose to trail usage for all bikers. However I don’t think these ebikes are going to go away, hopefully there won’t be an adverse backlash from these bikes. I would suggest in the future that these bikes be tested by someone with an actual knee or leg issue that would have a legitimate reason for needing a bike like this.

“Trek notes on their website that the company’s “MTB legacy makes Powerfly a true mountain bike,””

At least Cannondale didn’t say anything so asinine about the MX400.

I guess I’m just a crusty old bastard now, but I don’t ever see myself on a powered bike. I certainly don’t begrudge anybody who would though.

This will ruin trail access for us in the future. 20mph ?? What if some needs assistance to climb 7 mph should be fine. Someone climbing on one of these at 15 mph almost seriously injured one of my buddies. Not a mountain bike at all, it’s a e-motorbike. Don’t get it twisted.