With the Smuggler, Transition shows that geometry plays just as big a role as travel when it comes to capability. After all, the Smuggler only sports 115mm of squish in the back and 130mm up front – but the bike was so plush that it felt like more. That said, I used every millimeter of travel front and rear during my brief test ride. 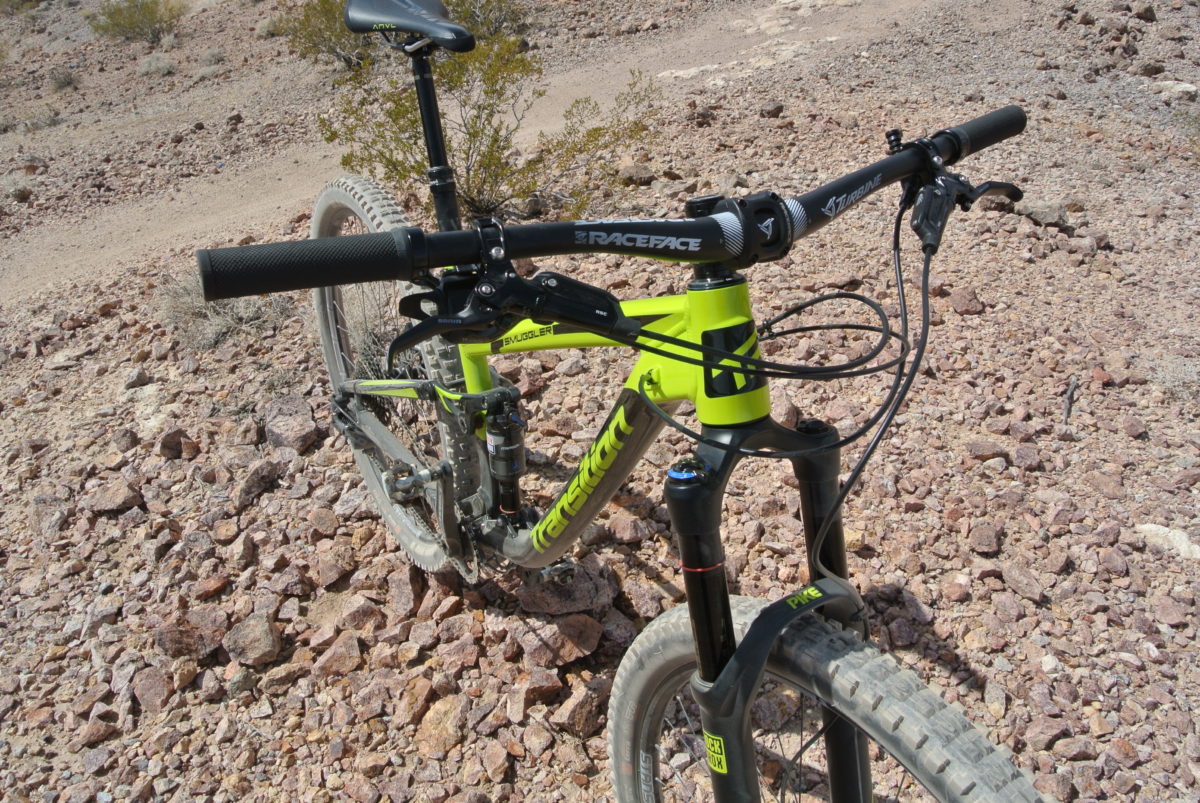 I rode the Smuggler 2, which is currently the highest spec Transition offers. The components are mostly SRAM/RockShox: an X1 drivetrain, Monarch shock, Pike fork, Guide brakes, and a Reverb dropper. The wheels are the new generation of Stan’s Arch EX, which have an internal width of 26mm. I like rims in the 25-30mm range for 2.3″ trail tires, which is exactly what Transition spec’d. In fact, they used my favorite combo of a Maxxis Minion DHF front and a Minion DHR II rear. Race Face got in on the spec action too, with their Turbine cranks, bar, and stem.

Retail for the Smuggler 2 is $5,000. Transition offers two less-expensive builds as well as a frame only option for $1,800. Transition claims the weight for the bike I rode is 29 pounds. 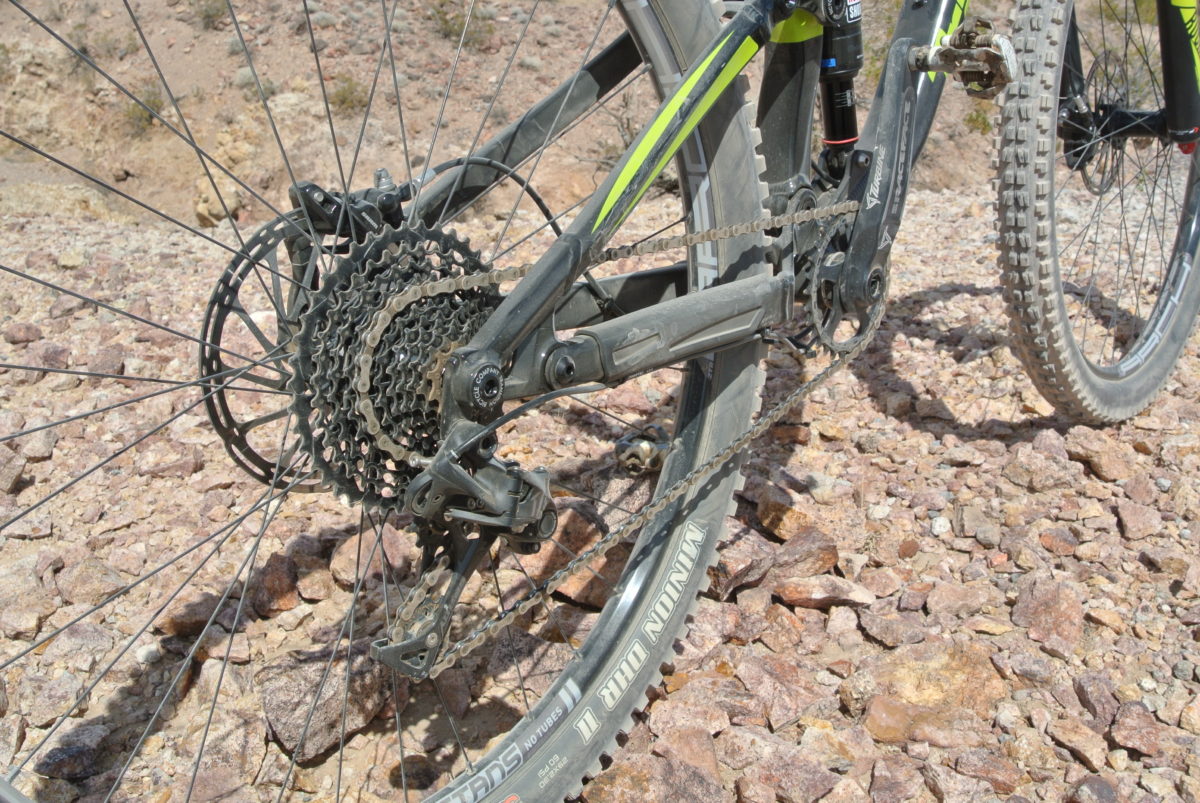 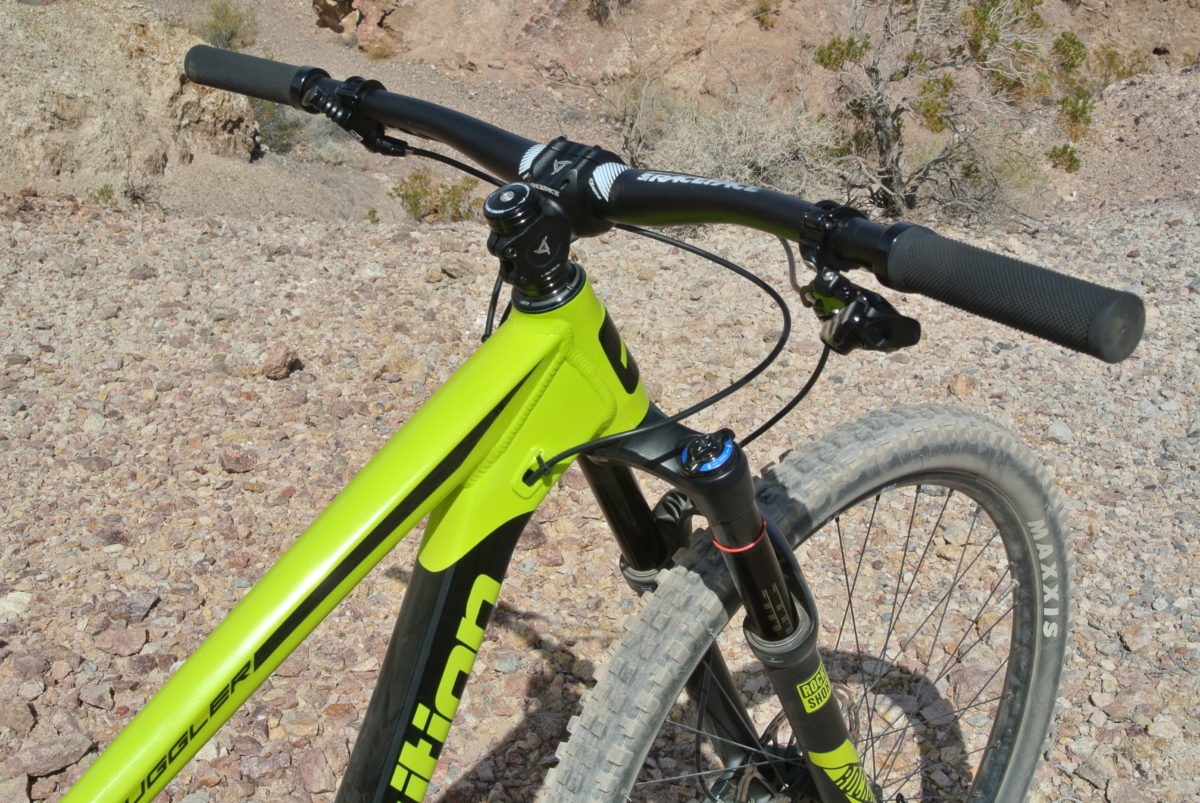 In regards to the geometry that I mentioned earlier, Transition has always been near the bleeding edge of long, low, and slack. The Smuggler has a 67.5 degree headtube angle, 436mm chainstays, and a reach of 457mm in size large.

At this point, I know the test loops I ride at Bootleg Canyon like the back of my hand. Being familiar with the trail allows me to focus more on the performance of the bike. Immediately, I felt comfortable and confident on the Smuggler. Climbing traction was excellent, as the rear end is active when the shock is left open. The tradeoff to that traction, however, is pedal bob. When standing and pedaling, there was noticeable movement. But, as someone who prefers their suspension to do its job, this did not bother me. However, if you want a bike that can pull double-duty on an XC race course, this is not it. 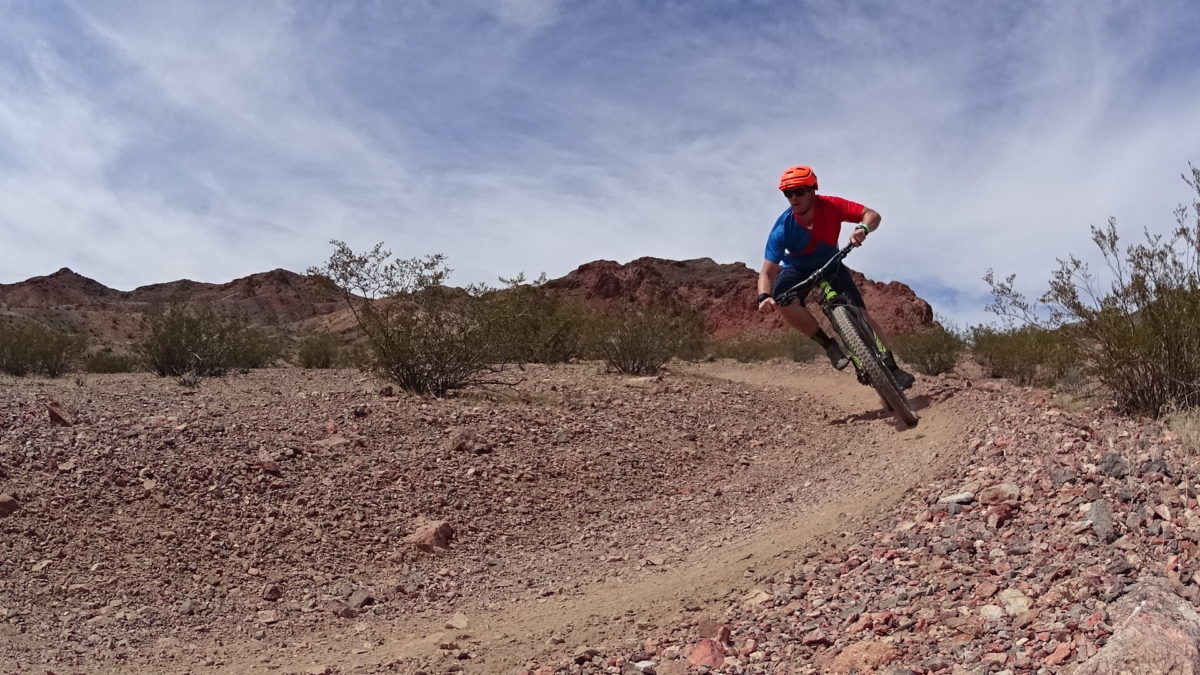 Like I said earlier, I used every bit of travel the Smuggler had to offer. Even so, I never experienced a harsh bottom out at either end. There are a few 3-foot drops and a handful of small jumps on the loop I ride, and I was able to attack them with the utmost confidence. Landings were smooth and controlled. This is a great bike for a rider like myself – someone who rides big miles, but really likes to push it on the descents. 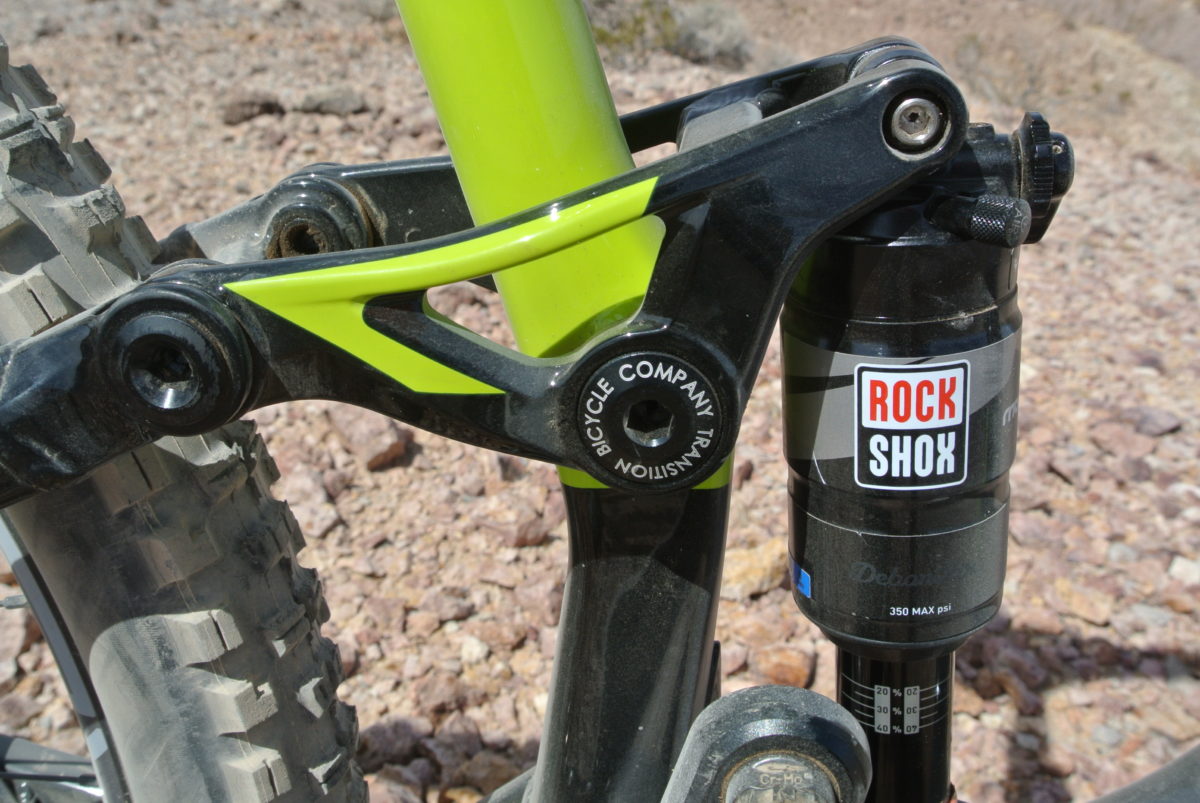 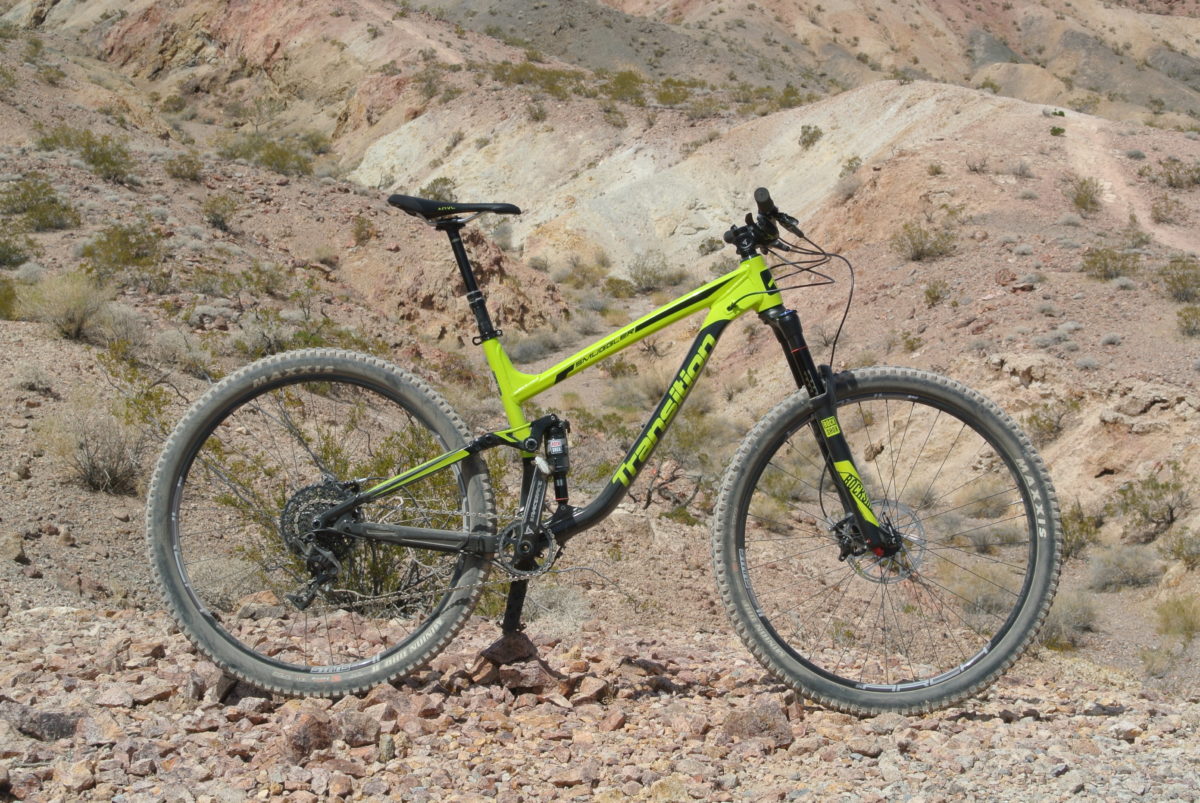 The only negative I could find from my brief ride aboard the Smuggler was a rattling cable inside the frame. Transition – like many other brands – routes most of the cables and housing through the frame. I will admit that internal routing looks cool, but it can also be a pain in the ass. Really though, there is no good reason for internal routing, at least from a practical standpoint. But, internal routing is what consumers want, so here we are. Maybe a quick cinching of a zip tie would have fixed the issue, but the rattling marred an otherwise excellent experience.

If a full-blown “enduro” (barf) bike is too much, but an XC bike is not enough, check out the Smuggler. In all likelihood, it is as much bike as most of us need.

Progression
How to Stay Strong in the Off-Season, Even if You're...
Gear
Best Mountain Bike Gifts Under $50
Gear
13 Reliable, High-Quality Mountain Bike Products Designed to Last
Gear
Why are Good Rain Jackets so Expensive? We had to...
Subscribe
Login
Please login to comment
2 Comments
Most Voted
Newest Oldest
Inline Feedbacks
View all comments

I’d say many, if not most, of us consumers want external cables and threaded bottom brackets. It seems the internal routing has been the manufacturers trend. Except on the best designs, you’re probably going to have to work to get those internal cables completely silent. I’d happily trade cosmetics for ease of use and silence.

Hey @foggnm, thanks for chiming in. However, I disagree. Internal cable routing is more of a pain in the ass for bike companies to design and manufacture. They wouldn’t be doing it just to do it. You’ll see people like yourself (and I agree with you for the record as I stated in this write up) comment online about how they don’t like internal routing, but we’re in the minority. For every 1 of us, there are probably 5 people that saw internal routing and had to have it on their next bike. They let the bike companies know which is why even small brands caved and made it a “feature” of their new bikes. Those people probably don’t work on their own bikes though.