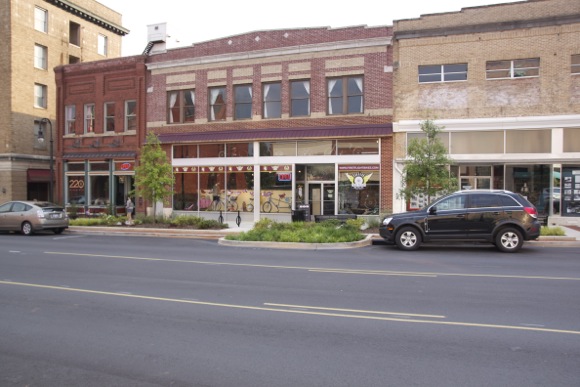 This weekend during the Southern Spokes Festival I got a chance to visit MOMBAT, located inside First Flight Bicycles in Statesville, NC and it was a revelation. Like Moab, MOMBAT is one of those places every mountain biker needs to visit at least once in their lifetime–the collection of vintage mountain bikes and parts is that extensive and that important.

From the outside, First Flight Bicycles offers up an impressive storefront along Center Street less than a block away from City Hall. Inside, the shop is spacious with high ceilings and a ton of merchandise on display. Initially I assumed the vintage bikes hanging from the ceiling and positioned on the walls were the museum. After all, many bike shops have small collections of vintage bikes on display in the showroom (Absolute Bikes in Salida, CO comes to mind). But these bikes are just the tip of the iceberg. 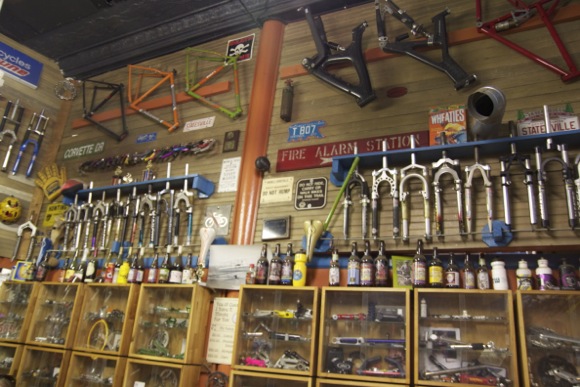 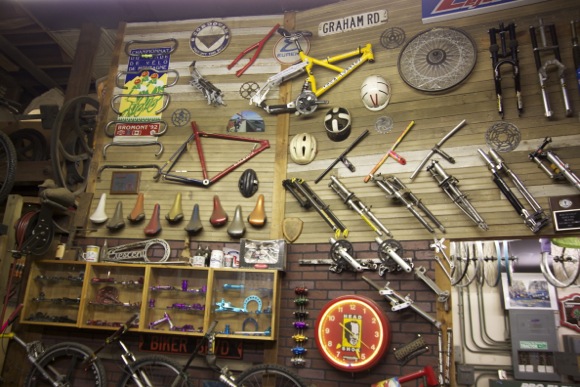 Walk through the shop in the back and check out the parts and memorabilia on the walls; take a right and peruse the racks of vintage bikes in the store room. Then, head up the long staircase to the mother lode: hundreds of mountain bikes, forks, tires, and various vintage parts. There’s even a basement store room full of new-old tires and boxes of closeout parts.

It’s hard to know where to begin or what to focus on–I quickly realized it would take an entire day just to look at every bike (there are currently 370+ bikes on display). Here are the things I saw and heard during a quick 2-hour visit. 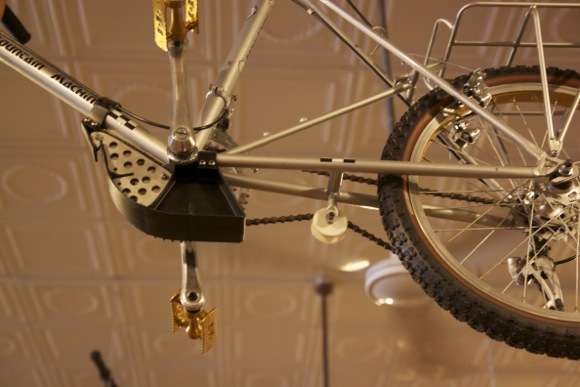 This bike was hanging from the ceiling as you can see, which made it hard to tell exactly what was going on. Still, the ridiculously over-engineered bash guard and chain retention system caught my eye right away. After looking this bike up on the MOMBAT website I realized the front and rear wheels are different sizes: 24″ up front, 20″ in back. I know bikes that mix and match 26″ and 29″ wheels are called 69ers; what do you call this set-up? Unusual.

Cut-outs to save weight 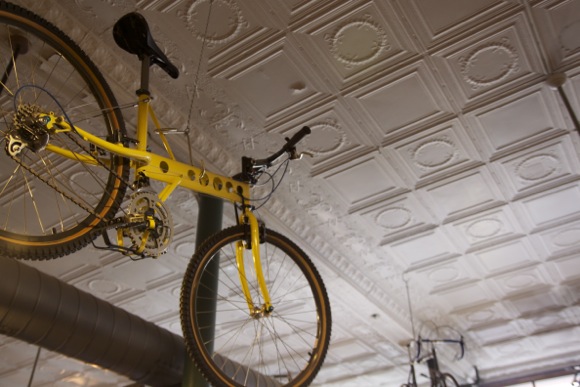 I’m not sure what kind of bike this is but there are a few on display that seem to use the same weight saving “trick.” True, a circular cut-out won’t produce stress risers like a more angular cut but I’m sure it would give many riders pause. This design also makes cable routing nice and neat! 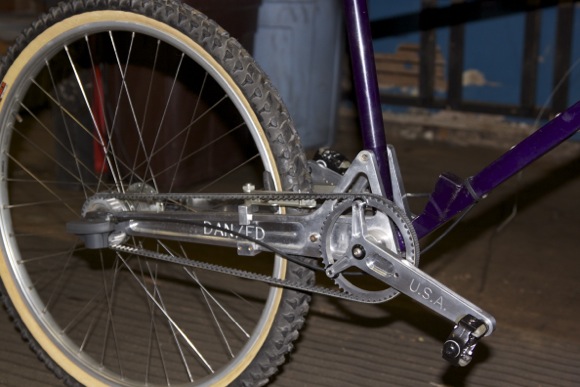 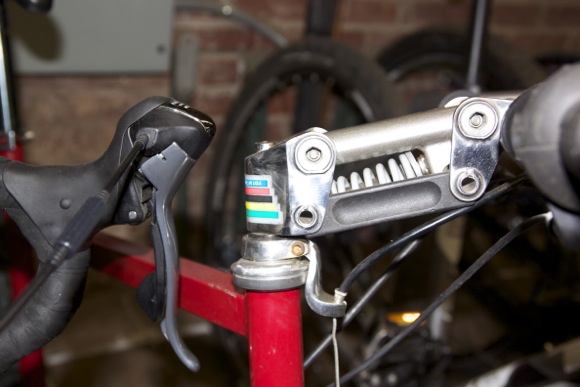 This is one of the more unusual bikes I saw at MOMBAT and one of the shop guys gave a great run-down on this bike. Right off the bat I noticed the square top and down tubes but that’s just the beginning. Not only did the Dan/Ed include a belt-driven drivetrain (in 1995, no less) but it also featured an internally geared hub. It even sported a suspension stem which was somewhat common in the 1990s (but still looks very odd today).

You might think this bike was some sort of prototype but MOMBAT actually has TWO of these bikes in the collection (a red one and a purple one)! 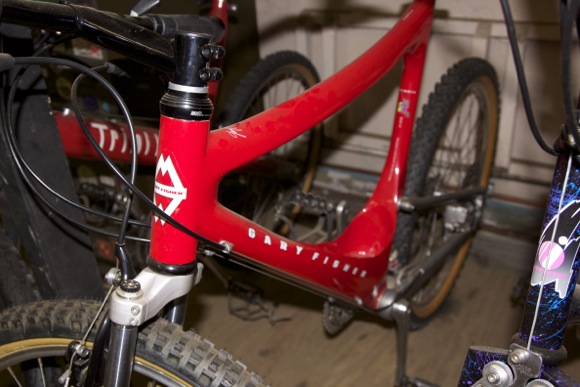 The unusual bucket scoop at the junction of the seat and down tubes caught my attention and as it turns out, this is just one of 7 prototypes of this bike ever produced. The scooped out area is really big and deep–I’d say it would hold at least 16 ounces of water (or mud!). 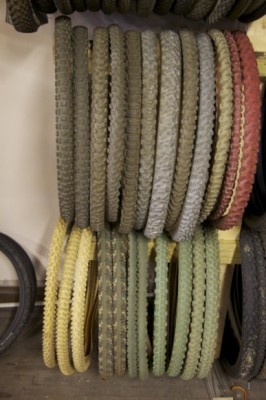 In the late 90s/early 2000s I had a set of green Michelin tires that I thought were the jam (similar in color to the tires at the bottom right in the photo above). Lest we forget, riders could get yellow, red, and even purple tires many years ago. More recently, companies like SweetSkinz have even offered mutli-color tire patterns. 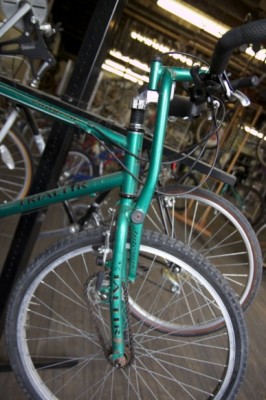 When I walked by this bike I did a double take–what’s a chain doing on the front wheel? My first thought was it was some kind of all-wheel-drive mountain bike but there was nothing connecting the pedal drivetrain to the front drivetrain. The pivot made me think you could add power to the front crank by moving the handlebars forward and backward which the MOMBAT description confirms. 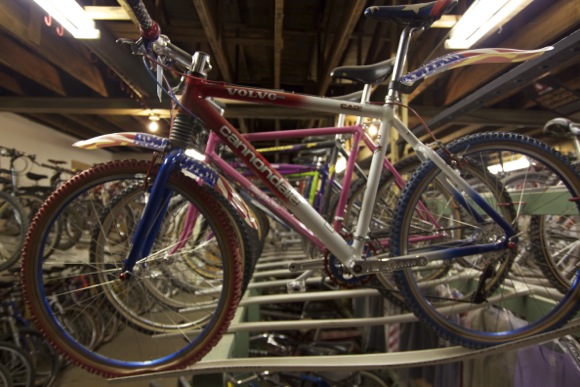 This is a replica of a bike Cannondale created for the 1996 Olympics and the first ever Olympic mountain bike race. Note the Cannondale headshock (this was before the lefty) and the cranks with weight-saving partial cutouts. God bless America! 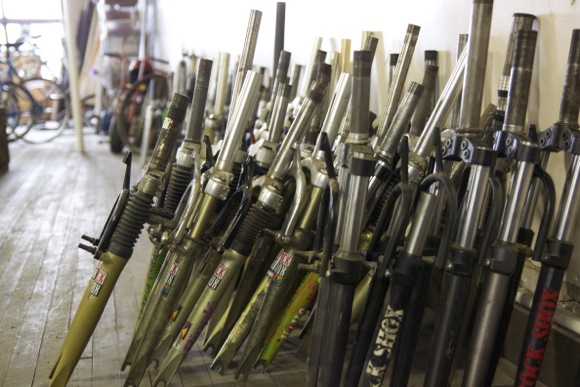 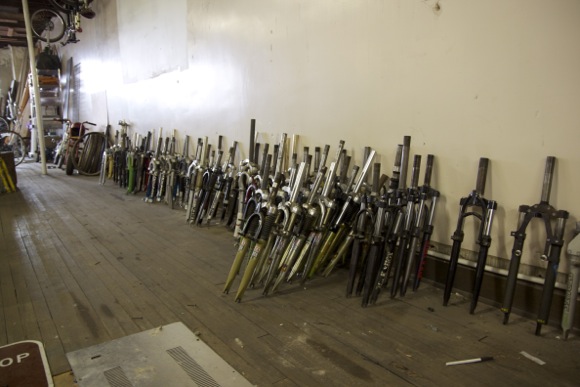 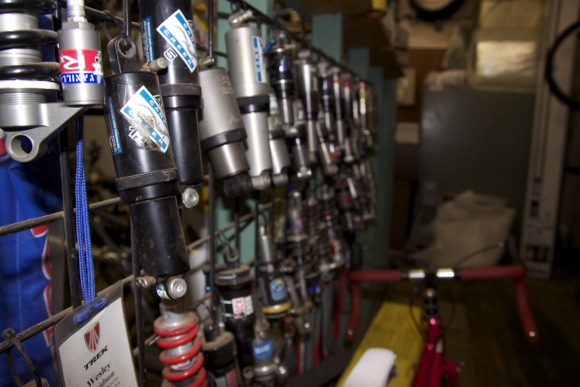 As I perused the walls of forks and shocks I kept thinking about how much Syd (element22) would love this place! Honestly I didn’t spend a lot of time looking at individual systems but just the fact that someone thought to collect all of these pieces is amazing. Seeing the evolution of design is truly inspiring. 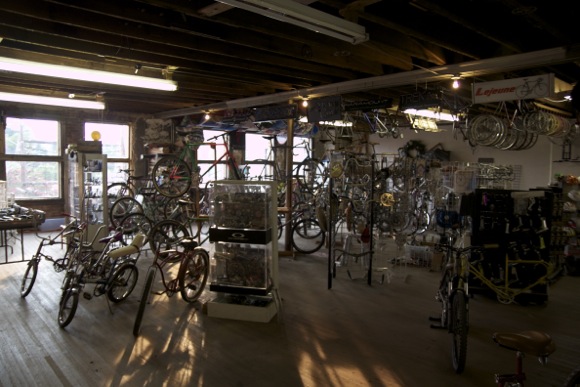 The upstairs. All of the items on display here are vintage or collectible. 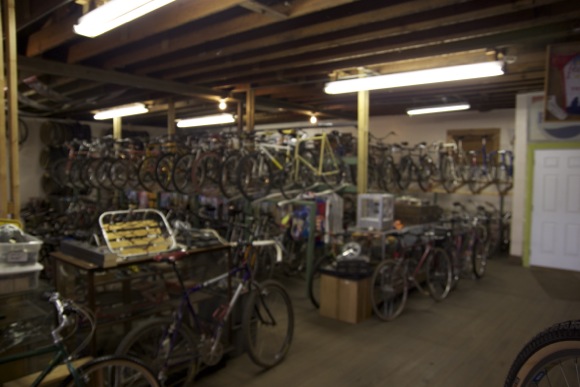 Upstairs room from another angle (yes, this shot is blurry). 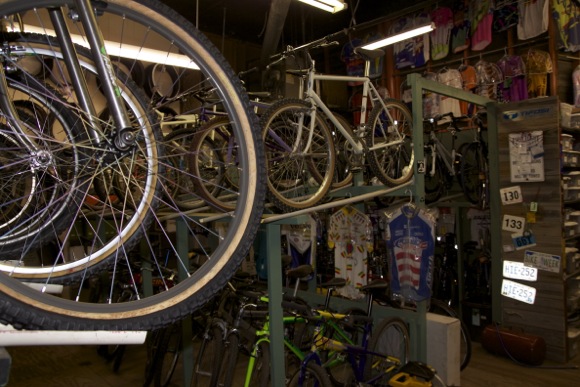 Store room beside the repair area.

I’m bummed these photos didn’t come out better but I had to include them to give a sense of the size of this collection and the rooms where they’re on display (the gallery if you will).

Unlike more traditional museums, the Museum of Mountain Bike Art and Technology is privately owned and supported. The upshot is many of the pieces are for sale to the public–you can take a look at the available bikes and parts right here.

Folks from all over the world contact First Flight to find rare parts or to get information about unusual bike finds. In many cases, the owners end up donating bikes or having the shop restore their vintage rigs. Values for vintage bikes are all over the place but perhaps the most expensive bike MOMBAT doesn’t have yet is a Breezer One. Rumor has it a Breezer One recently sold at auction for between $30-50K (you can see one of these at the Mountain Bike Hall of Fame in Crested Butte, CO).

Even if you can’t make the trip to MOMBAT, you can browse the entire collection at mombat.org. Still, every mountain biker should add MOMBAT to their bucket list–there’s nothing like seeing mountain bike history up close and in person!

Trails
Tennessee's Smoky Mountains are Full of Good Trails and Good...
Gear
The Continental Kryptotal Re is More Than a Trail Tire...
Trails
The 12 Best Mountain Bike Destinations in the USA [2022]
Gear
Are E-bikes Just Mountain Bikes With Motors? We Asked a...
Subscribe
Login
Please login to comment
8 Comments
Most Voted
Newest Oldest
Inline Feedbacks
View all comments

Looks like an awesome place to visit. I remember some of the unusual mt bike designs from the early 90’s. Brings back memories. I want to say Cannondale still uses the ‘headshock’ on the police mt bikes.

See, this is what I thought the Mountain Bike Hall of Fame would look like when I visited it in CB… this museum looks MUCH more legit!

Are you planning a right up on the Festival as well? Looking forward to hearing how that went!

Yeah, I was hoping someone would mention the MTB Hall of Fame so I could offer this comparison: there is none. Skip the Hall of Fame, go to MOMBAT!

I wasn’t planning on doing a write-up about the festival itself but I did post a few pics and notes on the forum thread: http://forums.singletracks.com/viewtopic.php?f=88&t=8511

Wow!! Very impressive! I’ve been to the Mountain Bike Hall of Fame in Crested Butte a couple of times. It’s small but worth the visit and yes, they do have a Breezer, however it focuses more on the history of the sport with some great old mtb articles and spotlights mtb bike forefathers both legendary and unknown. MOMBAT definitely looks to have far more bikes and is appropriately more focused on technological history. Makes you wonder what bikes we’re riding today that will end up in a museum. I would guess that one bike Singletracks tested that was made up of some support cables instead of tubes will find a place there someday!

Glad you made it by, it was fun showing you around. Come on back anytime.
Wes @ FFB/MOMBAT

Were the shocks and forks arranged chronologically? It’d be pretty cool to see the evolution right before your eyes.

Damm I wish I was there….I was checking out some of them photo’s and realizing I am old…Hell I used most of that gear that’s now on those walls…