For some folks, an inexpensive, mass-market, or department store mountain bike may be all they can afford. It might only function as a form of transportation between home and work and never see a day on the trails.

Despite light use on sidewalks and shoulders, these bikes still don’t seem to last very long. A $150 bike can fall apart in a matter of months, leaving buyers questioning where their money went.

For mountain bike enthusiasts, costs quickly add up and sometimes we wonder if the money we pay into the sport is worth it. A $2,000 bike might seem like an enormous purchase at first, but all things considered, most of the time, a consumer’s money seems to go farther the more they spend.

On mass-market bikes, corners are cut and money is saved by engineers, on component packages, and by assemblers.

The design process highlights an aesthetic frame with fun lines and cool graphics. Engineers design a frame that will first and foremost look cool, and second, be durable. Component kits are specced to fit a price point, but as a whole, the bike is made to sell, in volume, across the world.

This story will be the first in a two-part series on the costs of mountain bikes. Part two (coming tomorrow) explains why premium mountain bikes cost as much as they do.

For anyone who’s ever heard, “You could buy a motorcycle for that much!” after telling a friend who doesn’t ride the price paid for a mountain bike, that story will be for you.

Initially these two topics were meant to be written separately, but as I learned more, it became apparent it would be hard to talk about one of them, without talking about the other.

I sent out numerous emails to bike shops, bike builders, and brands like Yeti Cycles, Commencal, Trek, Spot, Mongoose, Hyper, and others to see if they could inform readers about how bikes are priced and the steps they take to make them durable.

Trek declined politely. It was an onion with too many layers. The rest never returned emails or calls.

When it came to finding out why mass-market bikes don’t last, I expected straightforward answers about how the bikes are poorly built, the frames fall apart after sending them off a curb, and the components have the durability of a piece of balsa wood left out in a rain storm.

The answers however, turned out to be much different, and although there are of course issues with cheaper materials and less thoughtful engineering, much of the responses highlight a social issue surrounding the purchase of a bicycle.

“How many customers are educated simply about how to care for their new bicycle?” asked B Vivit of the United Bicycle Institute in Ashland, Oregon.

Vivit is a faculty member at UBI and helps instruct classes. She sees part of the reason mass-market bikes don’t last is that owners don’t understand how to take care of their bikes or maintain them properly.

“Let’s be real, these customers walked in the door, grabbed the bike with the best price tag and the coolest paint job, and walked up to the register and then out the door. There wasn’t even a bicycle sales associate in that transaction to interfere,” said Vivit of customers and the buying process at a department store. 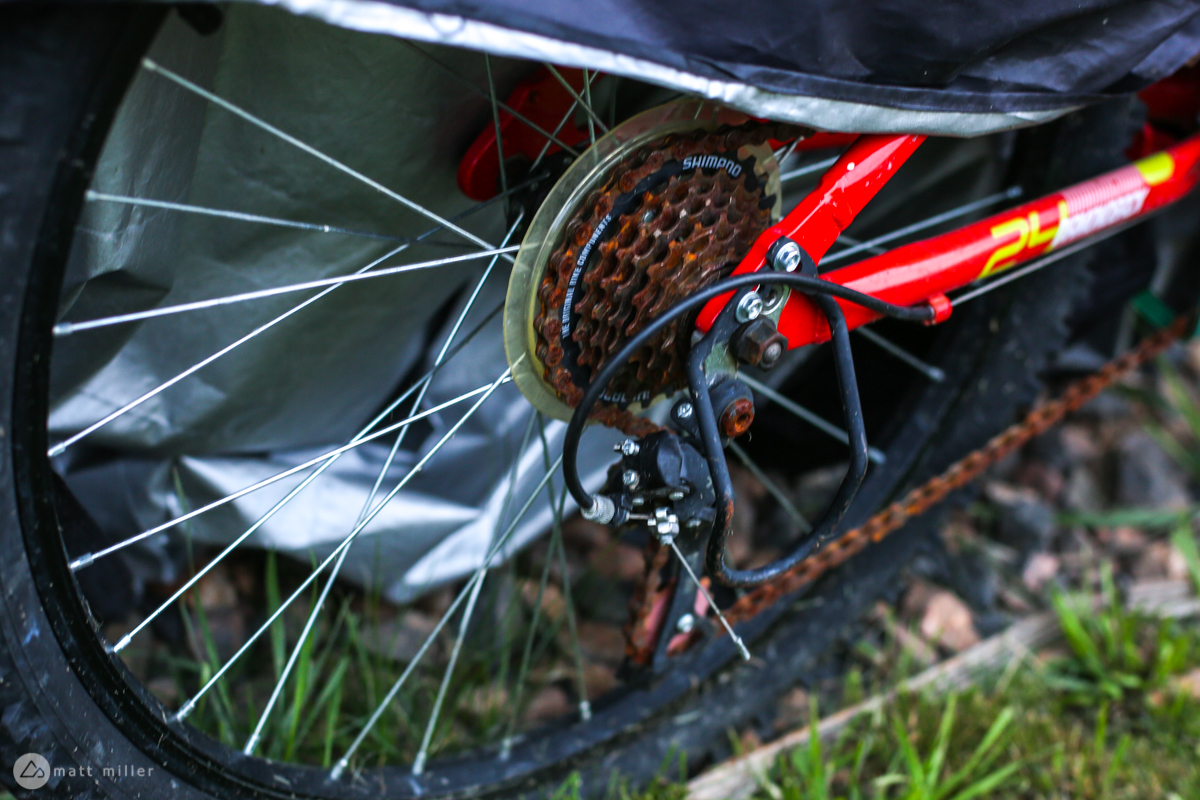 Sales at Wal-Mart don’t involve a bike salesperson, and it’s probably rare that an associate off the floor even gets involved. When a customer sees the bike they want, they can wheel it over to the register hassle-free.

“Here’s where the culture and the idea that bicycles are ‘toys’ destroys our work and degrades our industry,” says Vivit. Vivit believes that if there were any intervention from a salesperson with a bit of knowledge, that a bike could last longer.

“Instead of handing the few customers that actually talk to a bicycle sales associate a stack of papers called an ‘owners manual,’ [a good step] would be to talk to them about bicycle maintenance.”

It wasn’t meant to be

Part of the problem is also that department store bikes aren’t assembled properly in many cases. At the volume of sales that these stores achieve, it isn’t about quality, it’s about meeting sales goals.

These bikes are doomed before they reach the hands of the consumer. Bolts aren’t torqued to spec, forks are installed backward, and so on. This certainly doesn’t get better when customers buy a bike online and have it shipped to them directly.

“All of the mistakes, over-torqued bolts, combined with the cheap materials, mean that in some ways it’s a miracle that these bikes are rideable at all,” says Vivit.

Andrew Thomas echoes this sentiment too. Thomas is the service manager at Bikes Together, a non-profit in Denver, Colorado that helps the community become more active on bikes by offering earn-a-bike programs and programs where members can learn how to fix their bike from experienced technicians.

It’s not the frame

Thomas has had swaths of bikes under his hands at Bikes Together. Although mass-market bikes are more common than others, they also receive premium bikes as donations from members.

All bikes are tuned-up and sold or handed out as part of the earn-a-bike program, where volunteers trade time and labor for a new-to-them bicycle.

And, while we might think that a Huffy or Hyper frame would be the first to crack, that’s not the case.

“I’ve seen plenty of rusty department store frames, but something else like wheels or brakes tends to render those bikes inoperable first, rather than the frame breaking.”

Arnold Kamler, the chairman and CEO of the mass-market brand Kent Bicycles and Bicycle Corporation of America can explain why.

“The truth is, with the modern welding, whether it’s TIG or MIG welding, we haven’t had one broken frame in the last 20 years,” says Kamler.

Granted, there could be broken frames out there that have been unreported. But Kent does have a customer service line and consumers use it. Kamler explains that they err on the side of safety though, rather than weight, and use thicker tubing in their bike frames.

This ensures a bike that’s not going to snap, and though it may be heavy, the consumers that are buying a mass-market bike aren’t weight-weenies.

“Nobody is really worried whether the bicycle weighs 27 pounds,” says Kamler. “It’s really just if it’s good quality, how nice is the welding, how nice is the painting, how cool are the graphics, what are the features on it?”

What about the components?

Since we’re of course not talking about premium components either, there must be some give here.

Kamler tries to use aluminum wheels rather than steel, since they hold a true longer and will stick to Shimano for their derailleurs when possible.

“Most retail customers, when they see Shimano, they’re happy,” he says. Even for bottom-level Shimano parts, Kamler says, “The performance is excellent, but it’s heavier.”

The cost of fixing an issue compared to replacing the bike also comes into question. Most mountain bikers have, at one time or another, had to fork out a few hundred dollars to get their premium steed back up to standard. But proportionally speaking, a $25 derailleur replacement or wheel swap, plus labor, usually doesn’t make sense for a hundred-dollar bike.

A lot of the fixing that technicians like Andrew Thomas do are on wear items, like tubes, brakes, and shift cables.

He does wish he could change things like bearing systems, though.

“If I could change one thing about how they are assembled, it would be to take more care adjusting the ball bearing systems,” says Thomas.

The loose ball bearing systems on a mass-market bike’s hubs are cost-savers for manufacturers. It’s one example of a component that will work correctly for a little while, but require adjusting and re-greasing as time goes on, and as we’ve discussed, that might not happen.

Really, it comes down to material and precision, says B Vivit. A lighter and more precise-fitting bearing, or component in general, increases cost.

A material that can be machined to a more precise fit is more costly than one that won’t be machined precisely.

“And as Keith Bontrager said, ‘strong, light, cheap; pick two’,” says Vivit. “So as you get a more expensive set of parts, you get a better tolerance between the parts and how they fit, and then the system works more exactly and wears more predictably.”

“And we can predict which parts will need to be replaced faster because we’ve engineered it to gather the wear. The trick? You have to maintain it.”

Part two of the series will discuss what goes into the cost of a complete mountain bike, and why premium mountain bikes cost as much as they do.

Culture
Inexpensive Mountain Bike Trail Snacks You Can Make In Minutes
Repair
When Rock Meets Rim: Attempting to Repair Larger Holes in...
Gear
Mountain Bike Build Kits and Pricing: An Inside Look at...
Beginners
9 Tips for Mountain Biking on a Budget, Some of...

Singletracks
Get Ready for a Bikepacking Adventure with these Gear Picks
Videos
Enduro Racing from a Photographer's Eyes [video]
Gear
What is 'Too Heavy' for a Mountain Bike?
Gear
4 Mountain Bike Saddles, Reviewed for 2020 [Review]