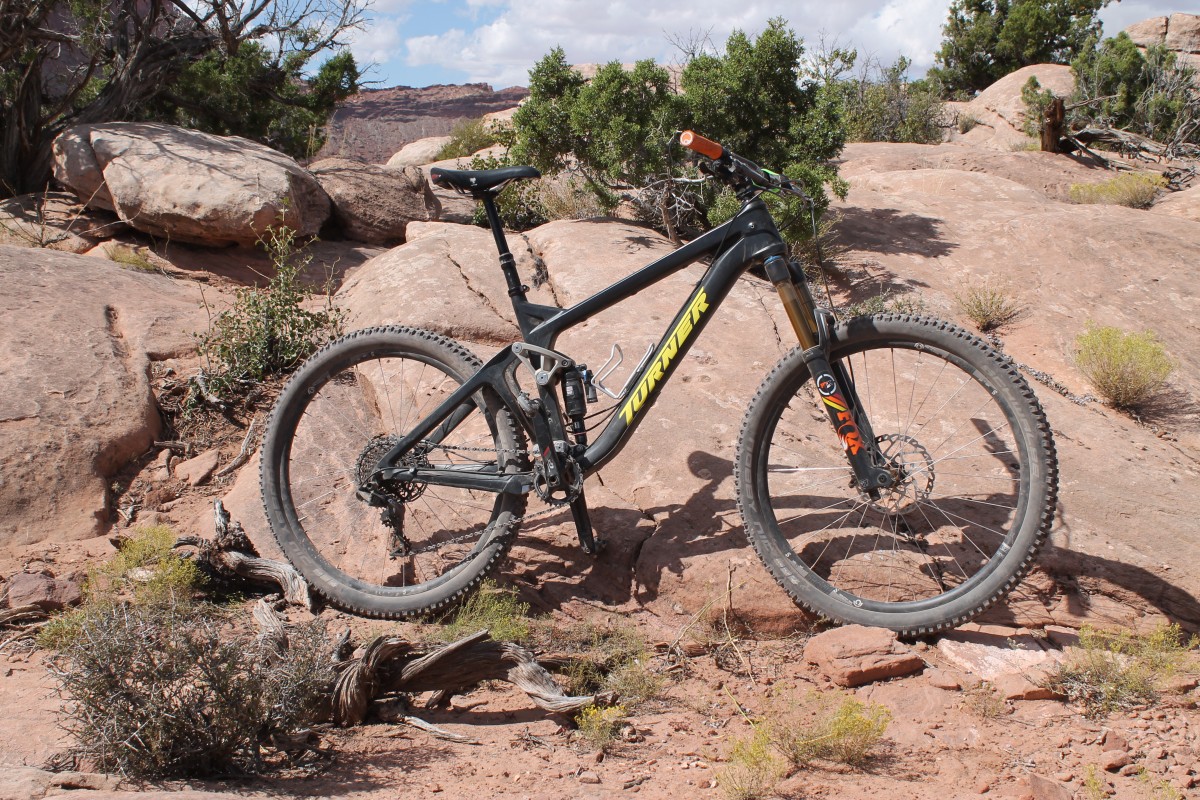 As I prepped for Outerbike, there was one bike I was particularly stoked to have the opportunity to try: the all new carbon Turner RFX 4.0.  Traditionally, Turner has made stouter-than-average bikes in every category, clinging to aluminum longer than most manufacturers.  At the more gnarly end of their continuum lay the all-mountain RFX, a beefy 6-inch-travel hard charger.

Located at that end of the spectrum, I suspected the RFX may be the last in their line to get the carbon treatment (they began with the strictly XC Czar), but here it was, Turner’s new enduro rig gone svelte.  Turner anticipated such a demand for their few demo copies that they required appointments to demo at Outerbike, and those appointments were limited to two hours, precluding heading out on the big shuttles. That meant that test rides would be limited to the immediate Brands Trails area, which didn’t offer a lot in the way of gnar to fully exploit the promise of this bike.  Nonetheless, I made my appointment, still thinking my glass was half full. 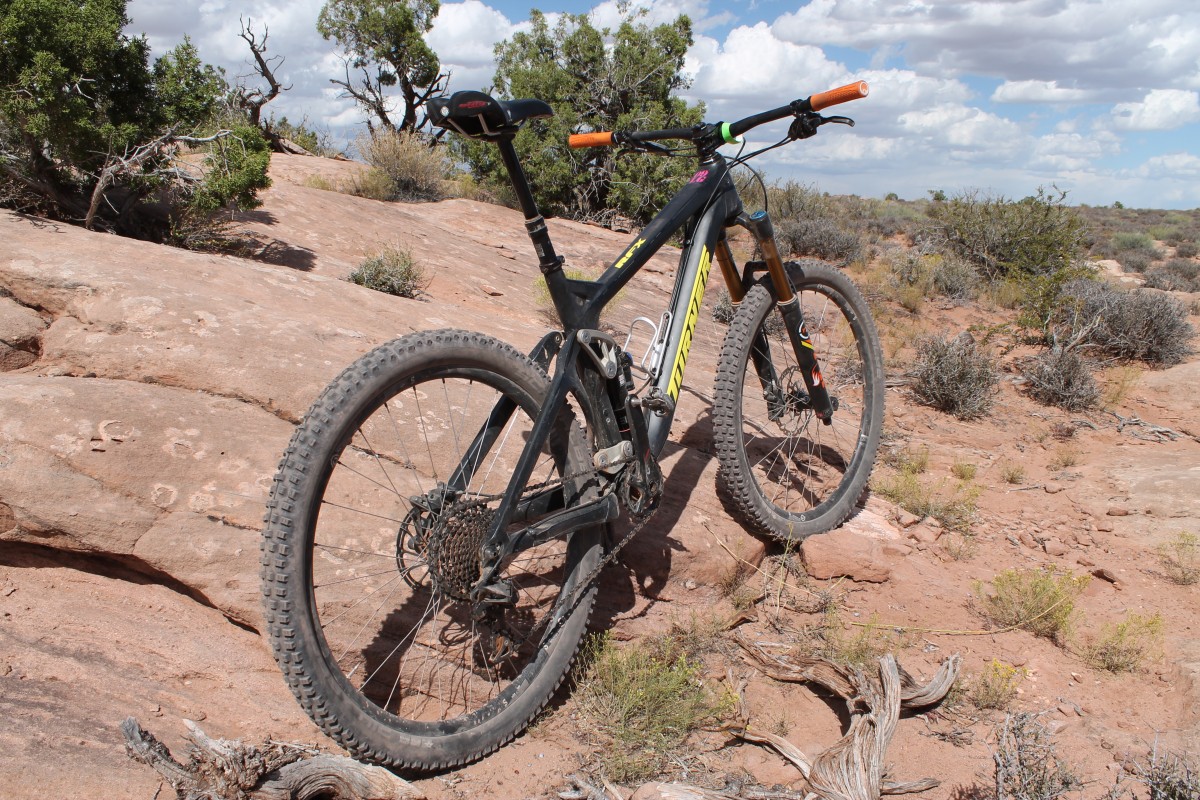 Although updated with carbon, the new RFX retains Turner’s rather utilitarian look.  Turner, to their credit, has never concerned themselves with making pretty bikes, knowing that once you throw your leg over a ride, whether or not it has “aesthetically pleasing lines” or a nice paint job suddenly becomes utterly irrelevant.  Functional performance is the overriding goal, and all efforts are expended in that direction.  As the newest carbon 6″ wonderbike on the market, and being built squarely on the Turner philosophy, I had exceedingly high hopes of being wowed as I approached the Turner tent at the appointed time. 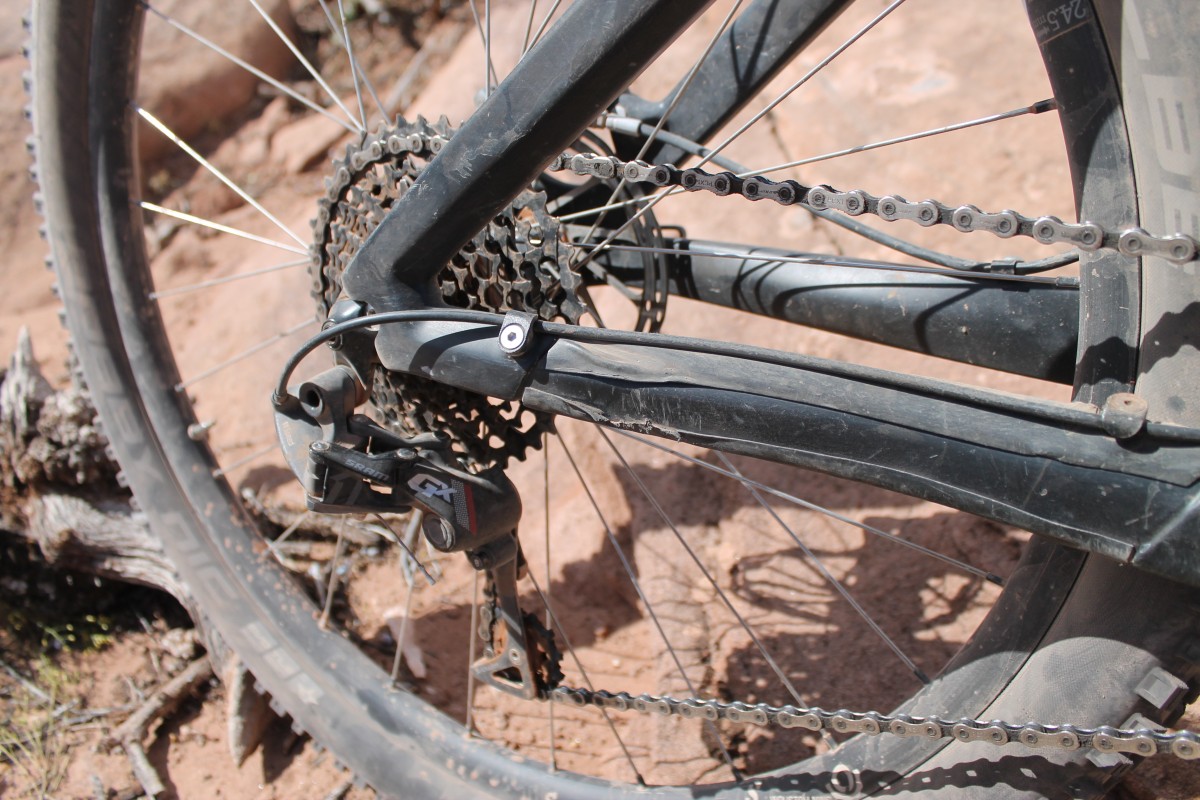 I was surprised to see the new carbon wonderframe loaded up with SRAMs more basic GX kit.  However, having not yet ridden a bike so equipped, I was not disappointed as I was keen to check out the new groupo.  An actual quirk in my bike’s build relative to the standard kit was the inclusion of a Fox fork vs. the specced RockShox Pike, which I also wondered about with regard to its effect on testing this bike.

Given that I would only have the bike for two hours and couldn’t take the shuttle to Amasa Back, I plotted out the most gnar-intensive course the Brands trail system could offer, which would include Deadman’s Ridge, Long Branch and the double-diamond-marked Killer B and set out, still with great expectations.

After a gentle warm up on the accurately-named EZ trail came the turn onto Deadman’s Ridge, which is populated with many sharp, steep, and moderately-technical climbs, all of which the RFX shot up without any fuss.  What was particularly impressive was how easily it maneuvered up tight switchbacks, even with its relatively-slack head angle and long wheelbase.  The low-slung enduro geometry bottom bracket did lend itself to some pedal strikes, so an occasional ratcheting motion was necessary to maintain rhythm through the more consistently technical sections.  Through all the punchy climbs, the RFX was actually a joy to ride up, which was all the more impressive considering this ride came after putting in over 20 miles that day following two previous days of long, hard riding–a real testament to the wonder of this downhill-oriented bike. 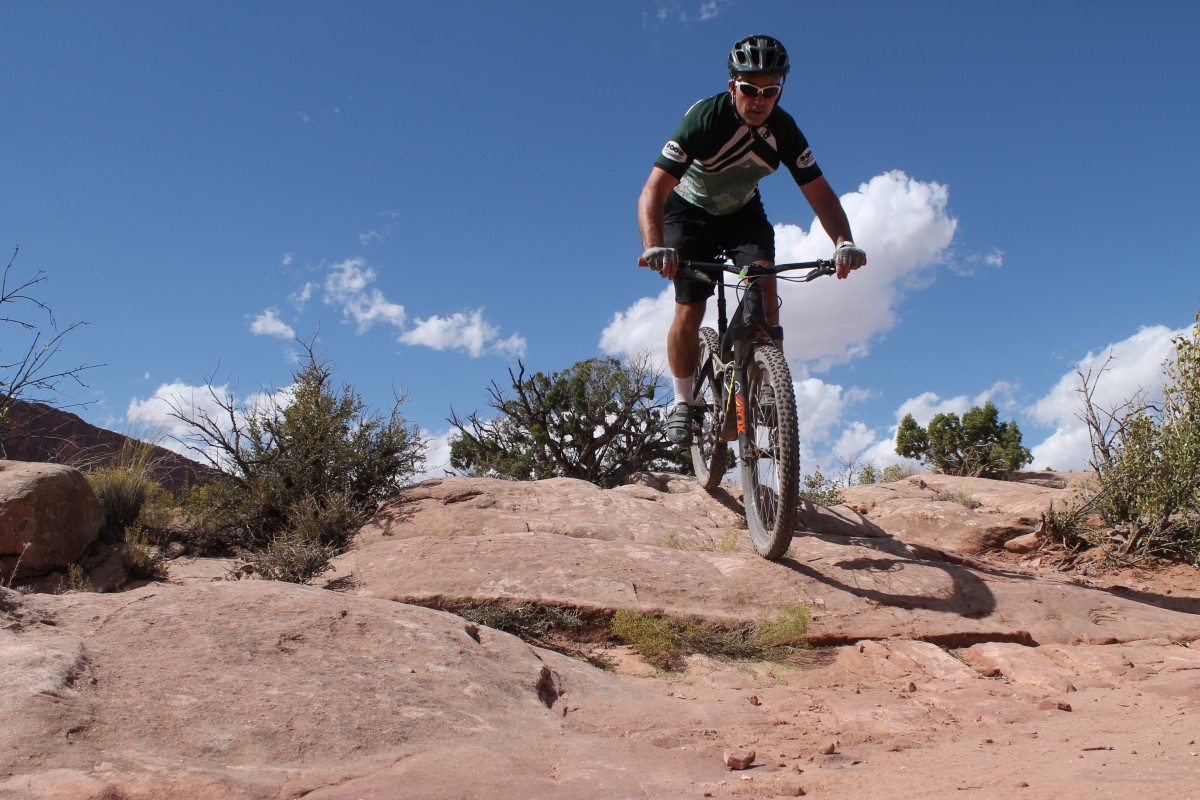 As expected, once turned downhill the RFX was truly in its element! I have ridden a few 6″ enduro bikes that were clearly cases of companies rushing to market to make sure they had an offering in this rapidly growing category.  Each quick, rocky descent offered by Deadman’s Ridge reinforced the notion that Turner did the right thing by waiting until they had the design perfected before releasing this bike. Beyond the inherently-excellent combination of the Turner design and the DW Link suspension, the out of spec Fox fork and the Rock Shox Monarch Debonair Plus rear shock blended together perfectly for seamless overall suspension performance.  The bike was always in sync with itself and, as a result, in sync with its rider as well. 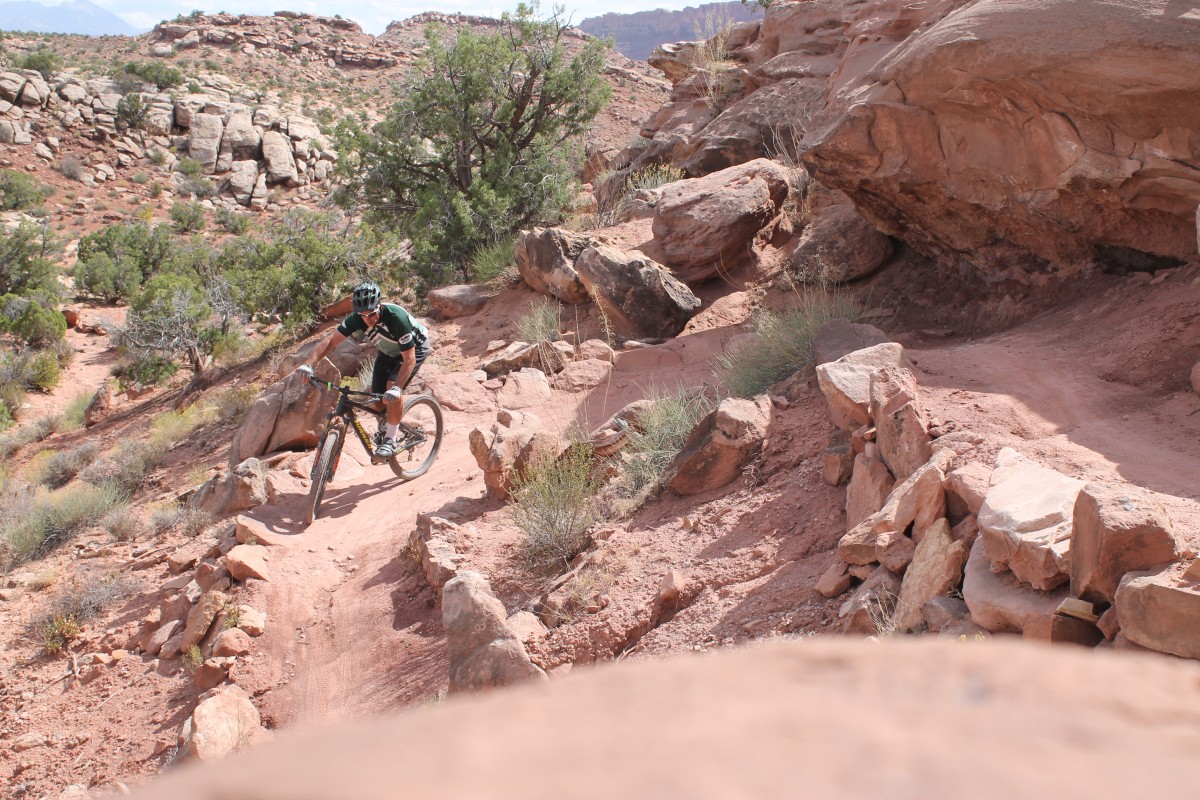 After completing the surprisingly-demanding Long Branch trail, it was time to put the RFX to the ultimate test: Killer B. I had read about the horrors of this trail and how only confident experts should even attempt it. I figured that, if any bike could carry my now-exhausted body through, it would be the RFX–which did so with surprising grace, even on the tight, V-shaped switchbacks.  To be fair, Killer B turned out to be nowhere near so hairy and scary as I had been led to believe, but it was enough to provide final confirmation that Turner has a real winner with the RFX.

As a final blow, by taking the Killer B trail, I was faced with a long, paved path climb to get back to the Outerbike venue, and very little time to complete it to have the bike turned in within the two hour window.  An uphill pavement sprint on a 160mm travel enduro bike?? Ugh!  But even that went well on the RFX, which refused to bob even as I dropped the hammer.

In the end, the RFX met or exceeded every one of my unrealistically-high expectations.  At this point, I believe it to be the best of breed in the 160mm Enduro class.  Making it even better is the fact that the GX-equipped carbon RFX retails for $4,573.  Just try finding another 160mm carbon wonderbike at that price, let alone one with this much awesome design engineering and on-trail capability.

Trails
Cuyuna and Pisgah Add New Trails, While Utah Gets a...
Trails
Passing By: Mountain Biking the Steep and Rugged Trails of...
Progression
Sizing Up or Down Based on Riding Style Can Work,...
Gear
MTB Deals to Help Beat the Heat
Subscribe
Login
Please login to comment
1 Comment
Most Voted
Newest Oldest
Inline Feedbacks
View all comments

I think I’d get on well with the Turner RFX 🙂