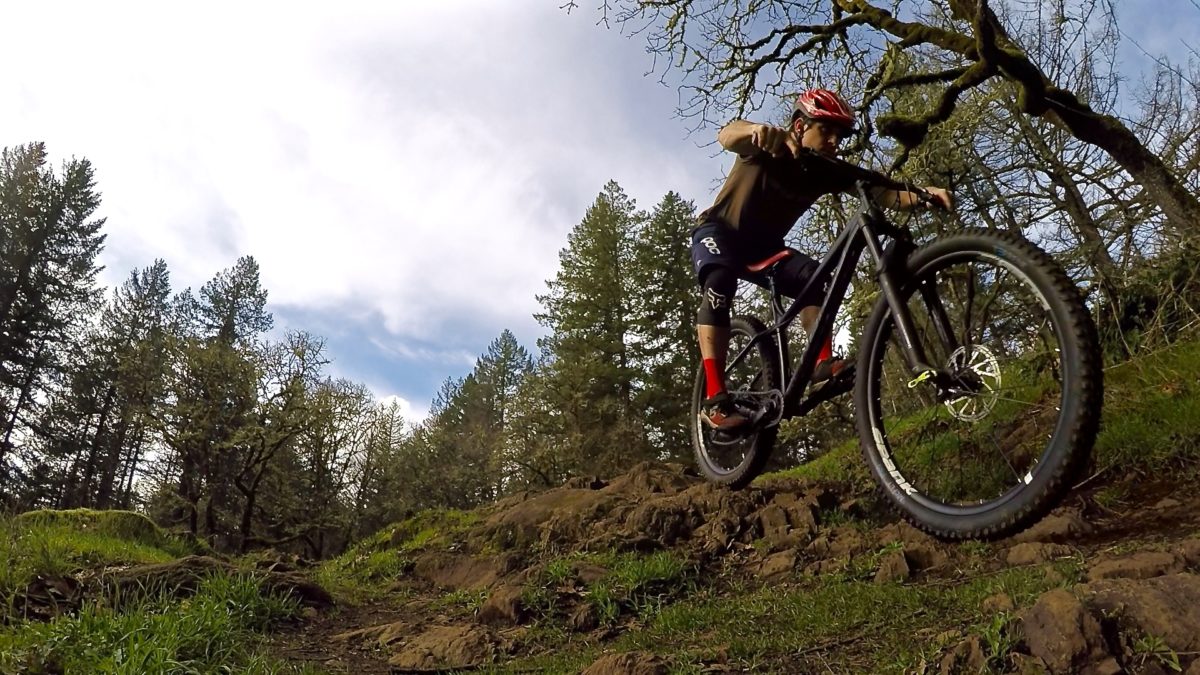 Terrene Tires believes a true adventure involves all types of conditions and terrain. True adventure also necessitates a tire that’s aggressive enough to tackle the unknown, but forgiving enough to pedal for miles and miles.

I tested the 27.5×2.8″ McFly, but Terrene offers this same configuration in a 29x 2.8″ version. Both sizes come in either a Tough (60 TPI) or Light (120 TPI) casing Terrene calls TekShield and Ultralight, respectively. With enough gnar and descending terrain in my neck of the woods, I requested the stronger TekShield casing. The decision on the heavier casing was also a result of an untoward experience I had on the Light version of the Terrene Chunk — their most aggressively-lugged plus tire. TekShield offers tread and sidewall protection which, although it adds to the weight of the tire, is a welcome addition for technical terrain.

Mounting the McFly to a set of Spank Oozy Trail 395+ rims was as easy (and difficult) as any plus tire mount. The tire slipped on easily enough, but it required a little extra attention and the aid of an air compressor to seat the bead. About 90ml of Stans sealant was used and a psi of 40 was achieved to cure the tubeless setup overnight. At 40psi, the 2.8″ McFly actually measures out to about 68.5mm (2.7 inches). On the flip side, I found the actual weight of the TekShield casing to be almost 80g less than what Terrene publishes on their website (1,019g claimed vs 940g measured). 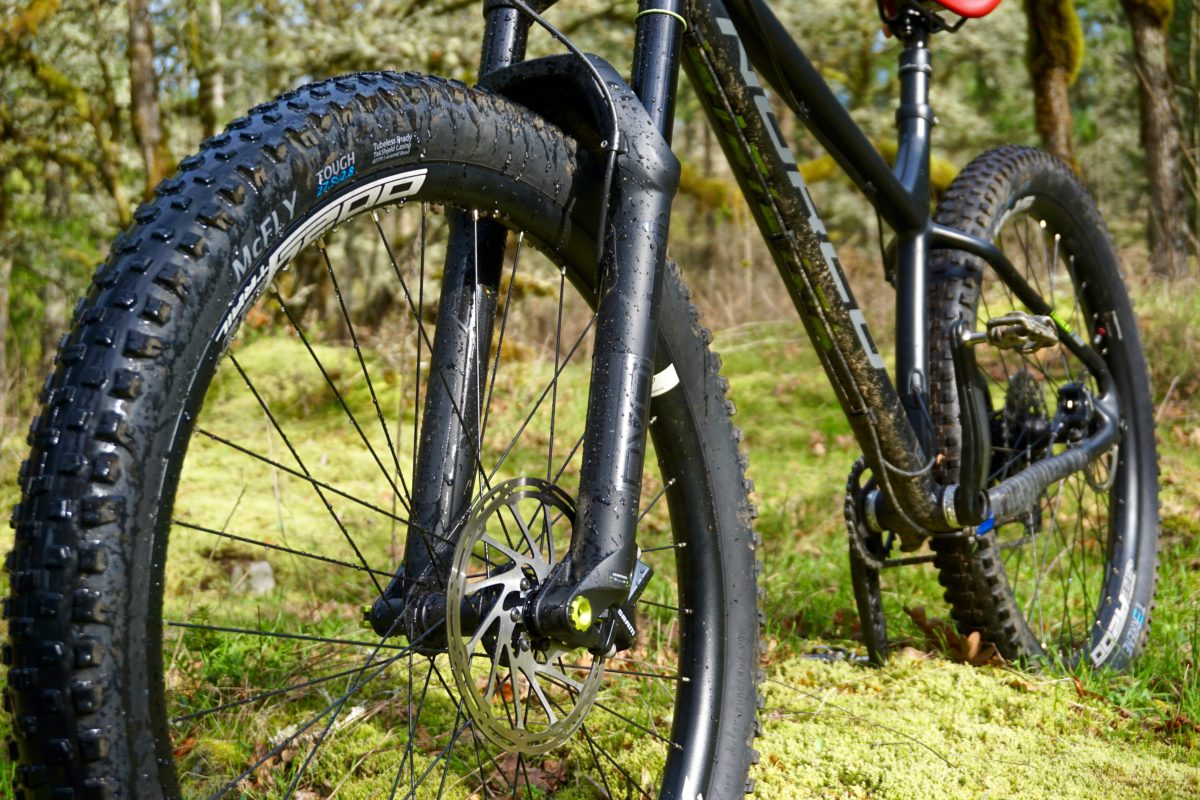 The McFly has three sets of tread columns: a center, transition, and shoulder. The center tread alternates between a single, wide knob which is siped horizontally, and a pair of channeled knobs each siped vertically. Note: the siping is very shallow. Between the center and shoulder knobs, a column of square lugs provides traction during the transition between upright riding and cornering. The McFly’s shoulder knobs are impressively tall for this do-it-all tire. Like the transition knobs’ alternating shape pattern, the cornering lugs switch off between a square block which runs flush with the sidewall and an aggressive, abruptly-shaped chevron knob. Ramping only appears on every other center knob, but all center and transition knobs are modestly heightened. 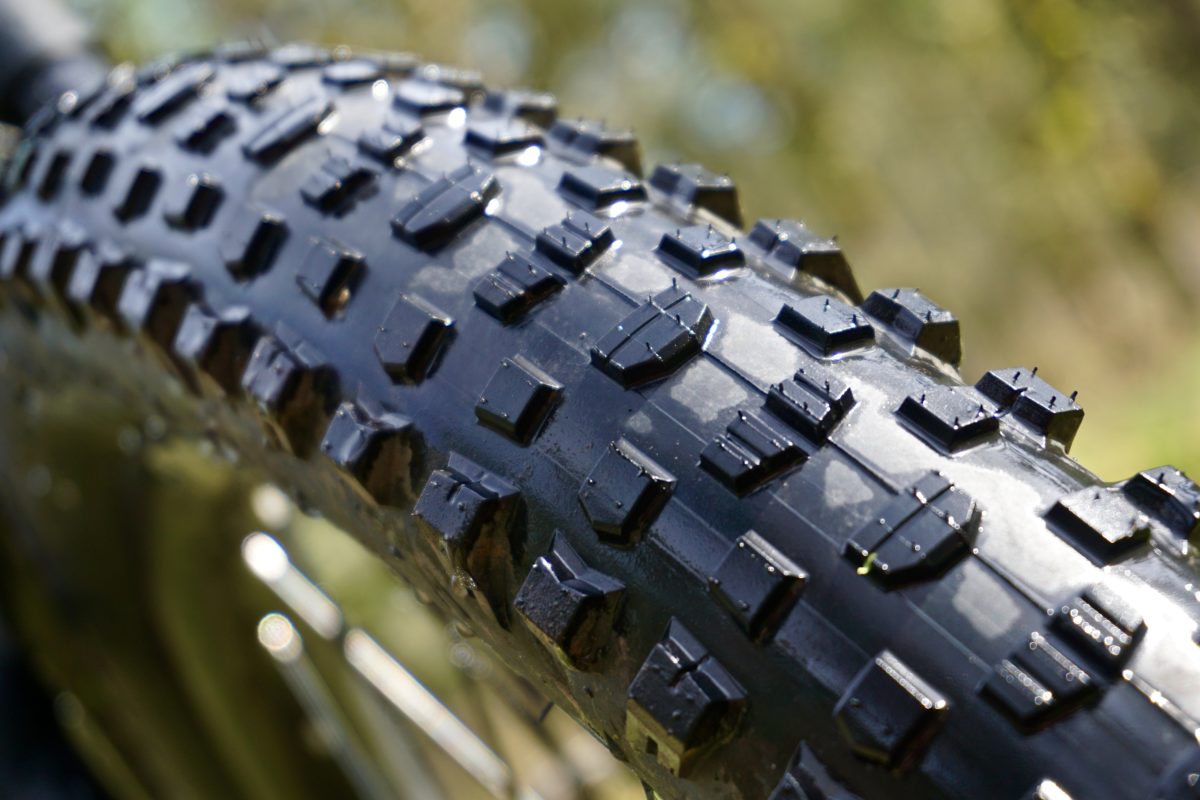 With a tread pattern that’s moderately heightened and uniformly spaced, the McFly ends up being more of a do-it-all, go anywhere for as far as you want plus tire. Neither too aggressive for cross country or backcountry, the McFly doesn’t get completely overwhelmed when things get a little rowdy, either. While there may be better offerings for the extremes of the terrain spectrum, the McFly aims to cover the most ground with the fewest compromises.

While ramping only occurs on every other center knob, rolling resistance suffers minimally due to the center and transition knobs’ lower profiles. The tradeoff between more squared-off knobs and less ramping also meant a solid bite over flat rock faces, large roots, tree fall, and any other feature carrying a higher chance of spin out.

The obvious drawback of this particular tire, in regards to rolling resistance, was the weight penalty incurred by the “Tough” TekShield casing. For me and my terrain, this is a compromise I am willing to take any day. For comparison, the Light casing is about 200g less per tire. 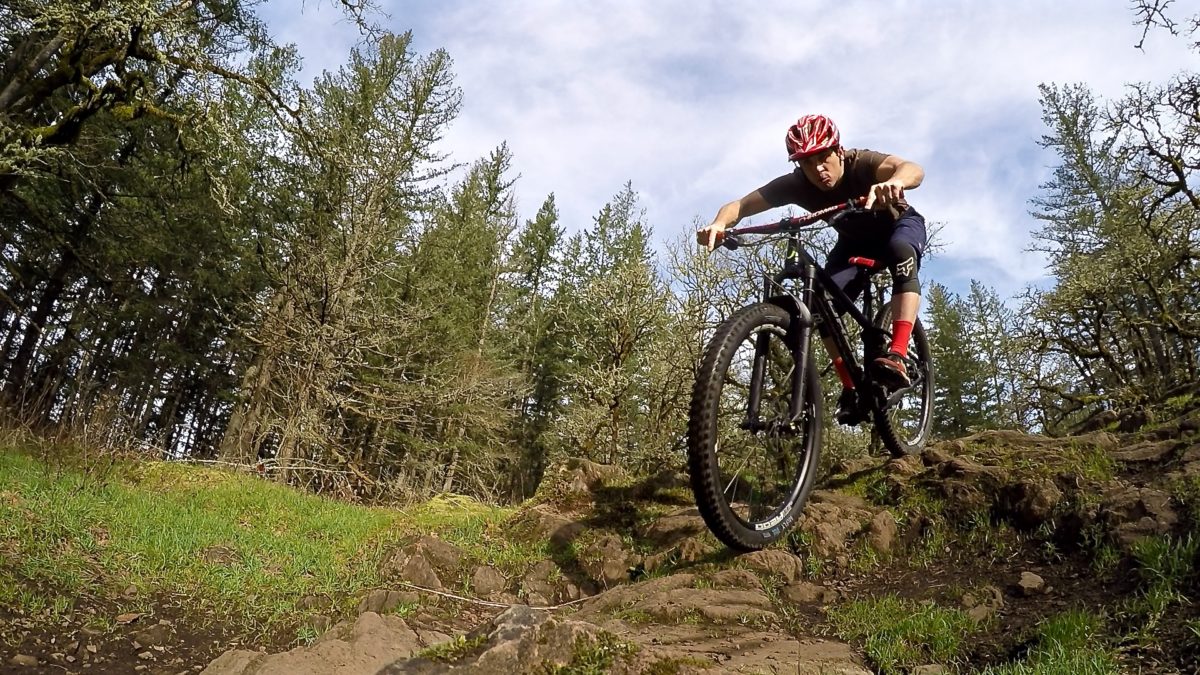 Thanks to a round profile, the McFly offers a seamless and predictable transition while cornering, with a noticeable bite from the taller shoulder knobs. Rather than an on/off feel produced by more aggressive tire treads, the McFly is smooth as you lean it over, with a row of stout shoulder lugs that instill confidence while cornering aggressively.

The McFly is not designed specifically for one type of condition but makes room for a variety of terrain. In other words, the McFly shoots for breadth rather than depth. Although the low-lying knobs don’t pierce mud like a true mud tread, the widely-spaced pattern proved more than adequate at shedding build up. While it’s difficult to tease out whether the superior performance in traction of a plus tire in loose and loose over hard can be attributed to the tread or the shear width, the McFly did indeed hold its own on these surfaces. 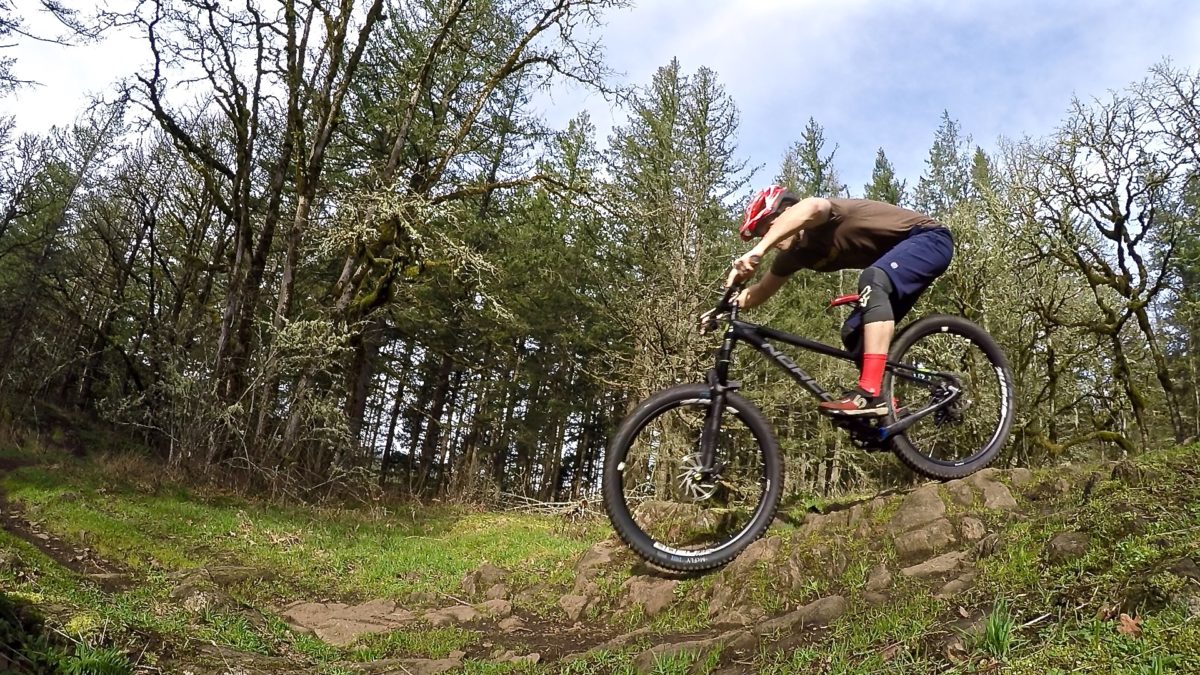 On plus tires, a tubeless mount is a no-brainer, but air pressure requires a more thoughtful approach. In the end, psi is really up to you — your terrain and your style. I’m rather quick to drop tire pressures to the obscenely and comically low, especially with a strong and supple casing such as the TekShield. That said, I found somewhere between 16-18psi a happy medium between good traction and the annoying bouncy sensation of riding atop beach balls (common with any plus tire). 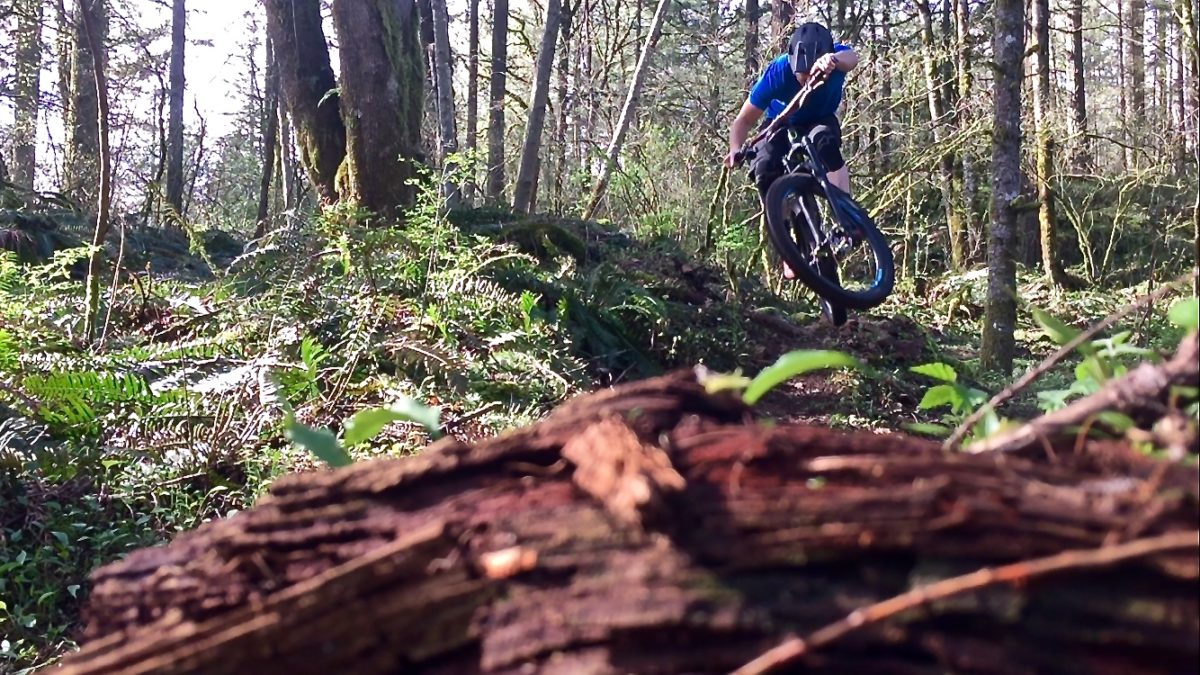 What the McFly lacks in specificity it makes up for in diversity. Whether it’s loose over hard, mud, rock and root-filled singletrack, or packed gravel, the McFly is a set-it-and-forget-it type of tire. Personally, my trail choices don’t deviate much from one week to the next but, given their performance and the potential for long-lasting durability, the McFly has won a permanent (for now) place on my wheels.

Thanks to Terrene Tires for providing the McFly for review.