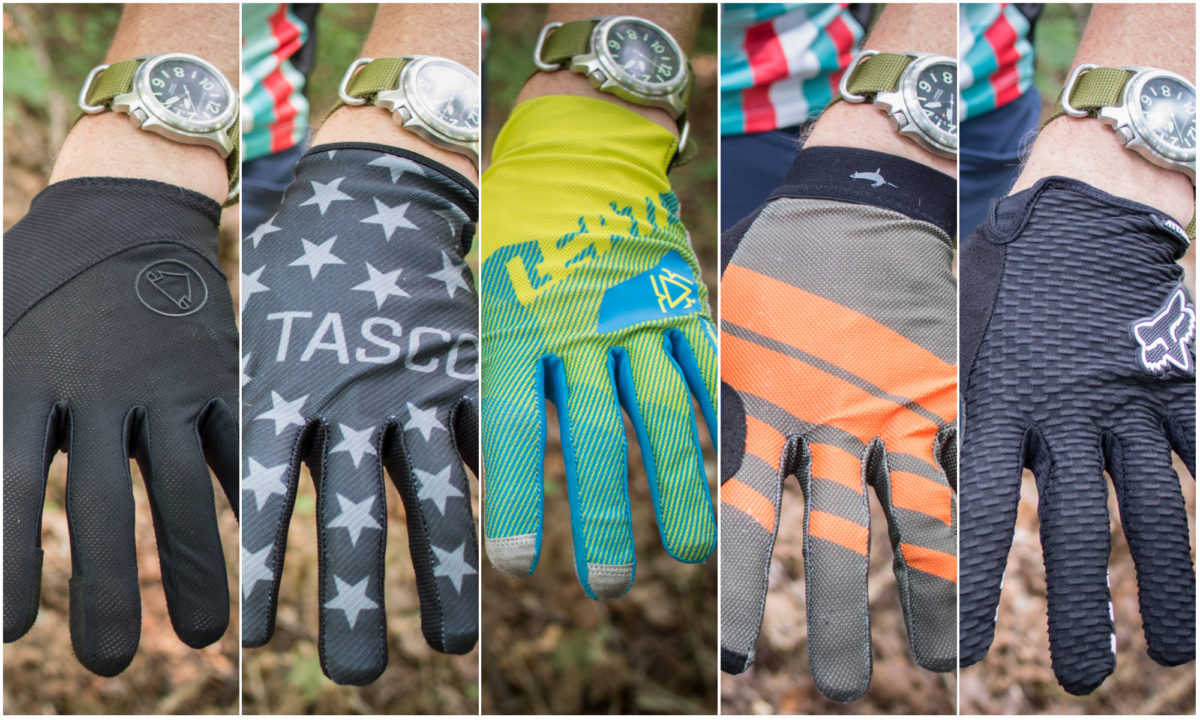 If you’re like me, you prefer not to wear gloves if at all possible. However, here in the sauna that is summer in the South, gloves are a necessity just to keep your hands from slipping off the grips.

The five glove options below all share some common features which I look for when mountain biking in the heat. These include: minimal construction, no padding on the palm, long fingers, breathable materials, and no cuff closure — they’re all slip-ons. Despite their different executions, all the gloves below weigh between 37-40g per pair (size large). As an added bonus, they all worked reliably with touchscreens unless really sweaty — then it was a mixed bag.

If you’re looking for a lightweight glove for summer riding, consider one of these. 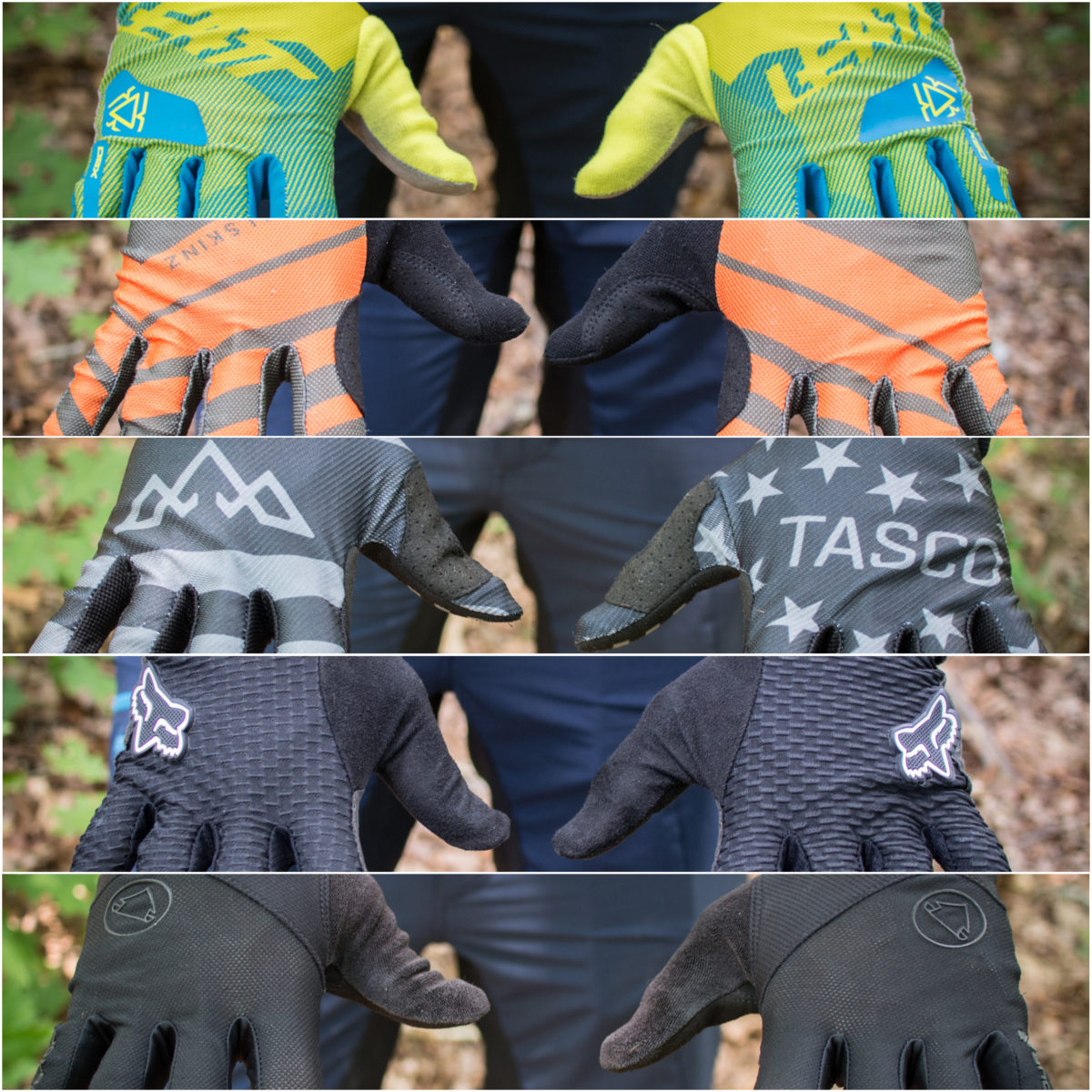 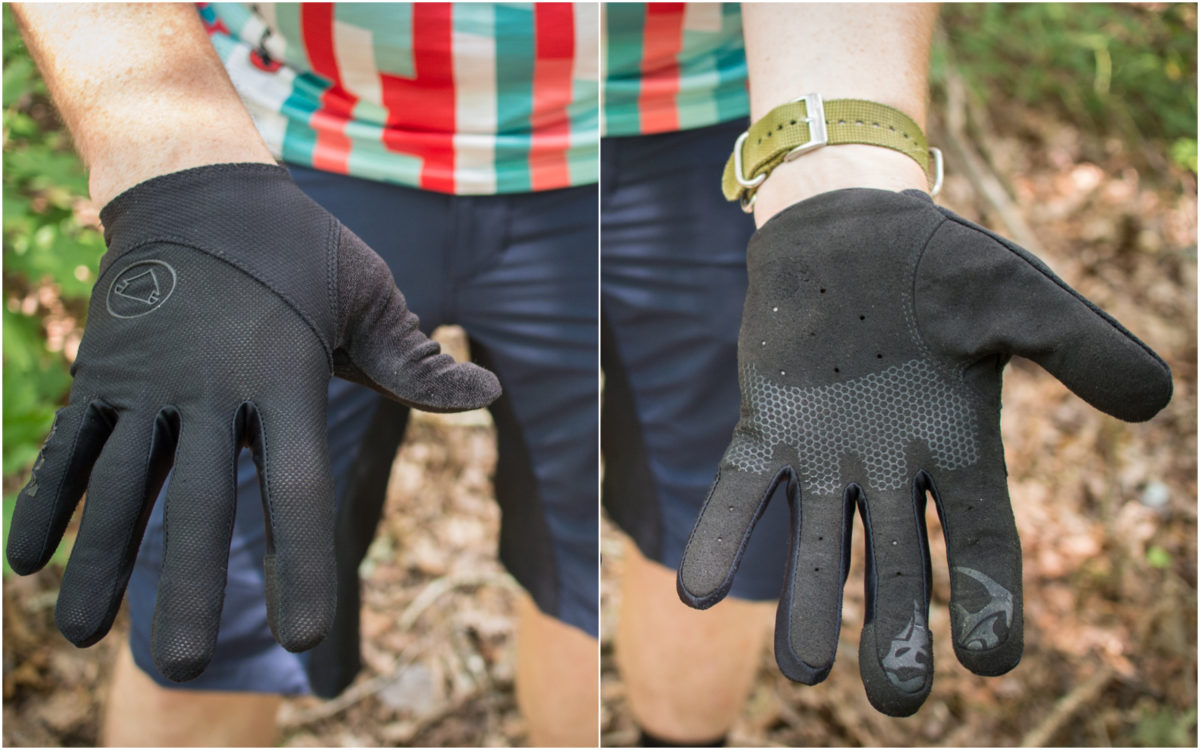 These are my personal favorite gloves out of the bunch. The backs of the gloves are made from a lightweight mesh that has proven to be extremely durable and breathable. In fact, this is my second summer riding in the Endura Singletrack Lite gloves, but you wouldn’t guess it by looking at them. When they first arrived last year I was skeptical that they’d be able to withstand a weekend on the bike, let alone an entire season, and now I’m on season two.

Everything about these gloves is quality: the synthetic suede palm has withstood a handful of crashes; the silicone printing on the palm and fingertips is still going strong; and they’ve been through the washing machine countless times now. While I’m happy to ride in any of the gloves on this list, if the Singletrack Lites are clean, they’re the first pair I reach for when heading to the trail. 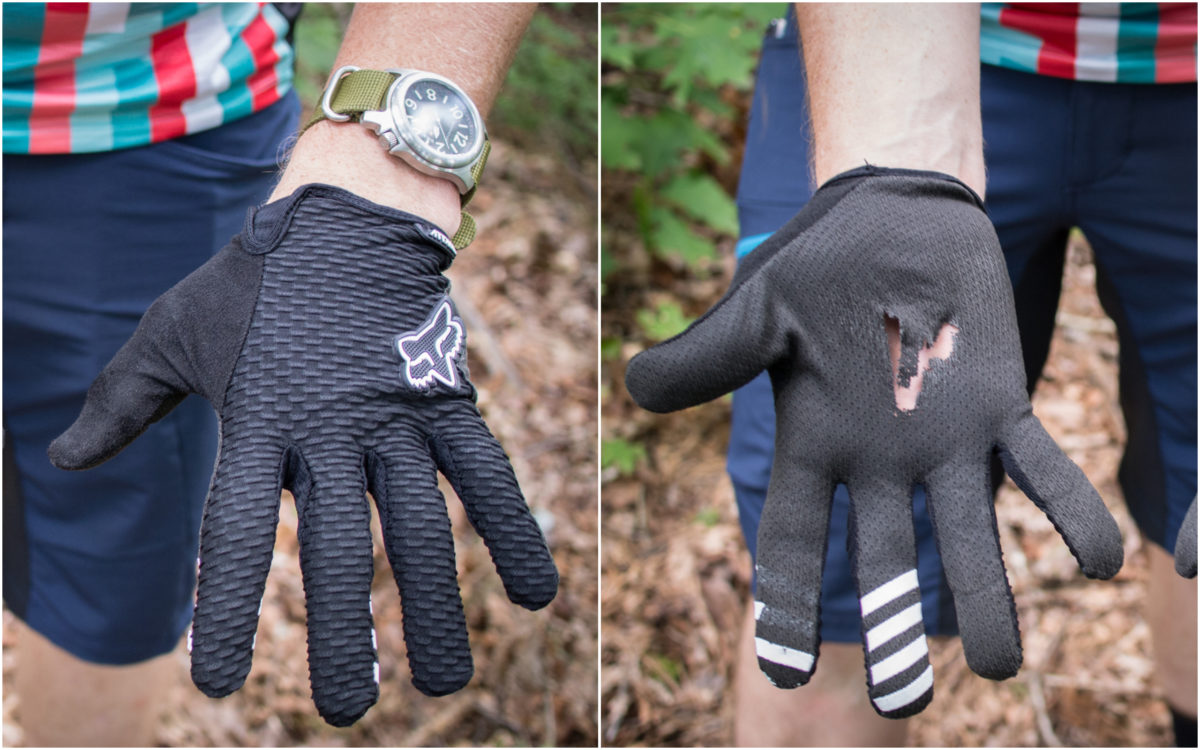 These Fox Attack gloves have actually been replaced by an updated version that now comes with D3O padding in the knuckles. It’s one of those materials that hardens under impact. Fox’s new Ascent gloves are probably the closest thing in their current line to these slighter older Attacks.

You probably noticed the big hole in the palm and that was due to a pretty major crash. I got ejected over my handlebars and was lucky to end up with just a few bruises. Since the gloves are so lightweight I don’t fault them for ripping at all. I was, however, disappointed with the silicone grippers on the fingertips; they started peeling off after the first wash. 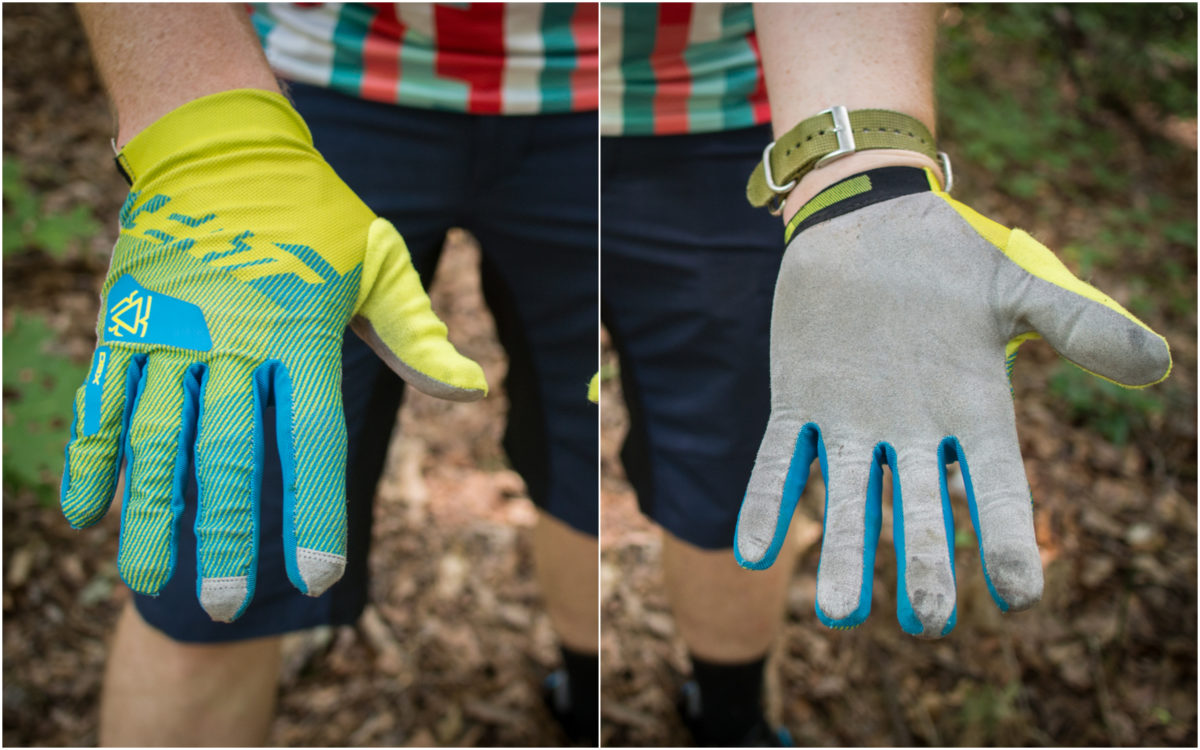 The Leatt DBX 2.0 X-Flow gloves are among the most breathable of the bunch — I’d say they are tied with SealSkinz and slightly behind the Enduras on that front. Their tight-fitting elastic cuff is lined with silicone grippers to keep the gloves in place. It certainly does its job well, although it can make them difficult to get on when you’re already sweaty. While the X-Flows do absorb sweat, the four-way stretch mesh dries very quickly.

Leatt uses a material they call NanoGrip on the palms, which feels a bit like suede. The material seems to operate like a cat’s tongue — smooth if rubbed one way and rough if rubbed the other. When you roll your wrists backwards on the handlebars, the gloves get grippier. 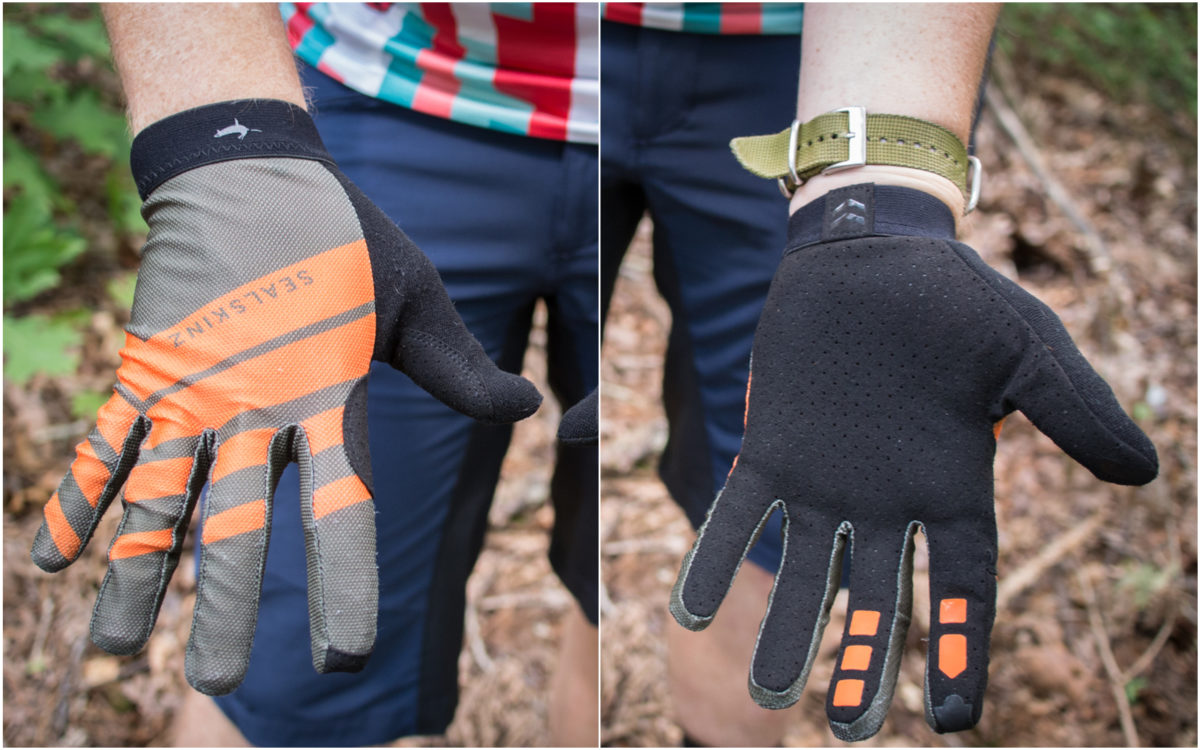 Sealskinz is known for their waterproof gear including socks and gloves, but these Dragon Eye Ultralites are a departure from the rest of the line. The mesh used on the back of the gloves feels almost identical to that used on the Leatt X-Flow gloves. Sealskinz went with a synthetic suede material on the palm and then thoroughly perforated it for additional breathability.

The cuff is a snug elastic band, but Sealskinz didn’t use silicone on the inside like Leatt did, which makes the Dragon Eye gloves much easier to take on and off during a ride. Bonus points for the use of orange! 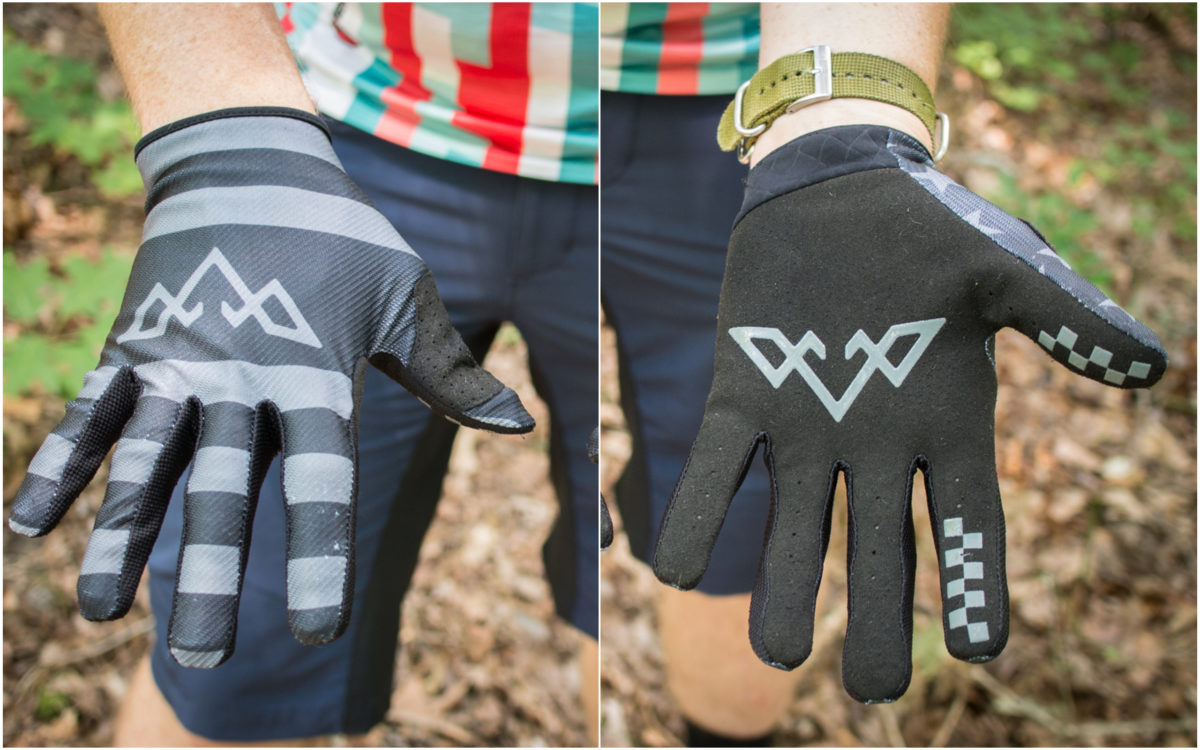 Tasco is a new company that makes MTB lifestyle apparel along with sock and glove combo packs. There are five different patterns to choose from; I went with the Black Flag option. These are solid gloves all around, but where they really distinguish themselves is in the art department. The left glove has stars with the “Tasco” name on it, while the right glove has stripes with their mountain logo. Their included socks are excellent as well, with a similar fit to my standby Swiftwicks, but with more cushioning.

Check out Tasco if you like to express yourself through your kit.

Sponsored
Mountain Vibes Only with the Club Ride Sun Valley Collection
Gear
How Do Carbon Mountain Bike Frames Break? Shawn Small of...
Community
You Don't Have to Love Suffering to Mountain Bike, But...
Progression
Have you Ever Attended an In-Person MTB Skills Clinic?
Subscribe
Login
Please login to comment
6 Comments
Most Voted
Newest Oldest
Inline Feedbacks
View all comments

I had a pair of Hand Up gloves and they fell apart in just a couple months. They’re a cool company, but I wasn’t impressed with their product. And, you’re still paying for a name with Hand Up.

HandUp Gloves is my go to glove with Tasco a close second. I’ve used the TLD and Fox gloves but I want a simpler, no padding, light weight glove and HandUp is what I wear.

Ive been riding with a red pair of fox attack and theyve held up for two seasons now and still are in great shape. Theyve been in wash multiple times as well and have not fallen apart (silicone is still there). What i really like about them is they are very airy and if i get them soaked, i take them off for a couple minutes and they dry out quickly.

GripGrab should have been tested 😀 https://www.gripgrab.com/collections/full-finger-gloves

Handup Gloves is the best glove that I have