It’s not every day that a company emails me and asks if I’m interested in going for a ride. Usually it’s “can you publish this” or “can you review that,” which is totally cool. But “do you want to go for a ride, and hey, after that, would you mind doing a fork review?” Yeah, you had me at “mountain bike ride!”

Dan Dacko of SR Suntour and I decided to meet up for a shuttle ride at Outerbike. The shuttle for the day was Magnificent 7, so I grabbed an Auron-equipped Norco Range from the SR Suntour Booth and hopped in the van.

On the shuttle up to the top of the trail, Dan filled me in on the Auron’s specs and a little bit about SR Suntour’s high-end product line and where they’re headed.

SR Suntour is the largest bicycle fork manufacturer in the world, and in the past few years they’ve decided to take the solid principles at work even in their low end forks and apply them to high-end components. According to Dan, “We make a solid fork that is going to perform well, is easy to maintain, and easy to use.” Since I’m not much of a mechanic and I shy away from complicated suspension setup and maintenance, that all sounds excellent to me! 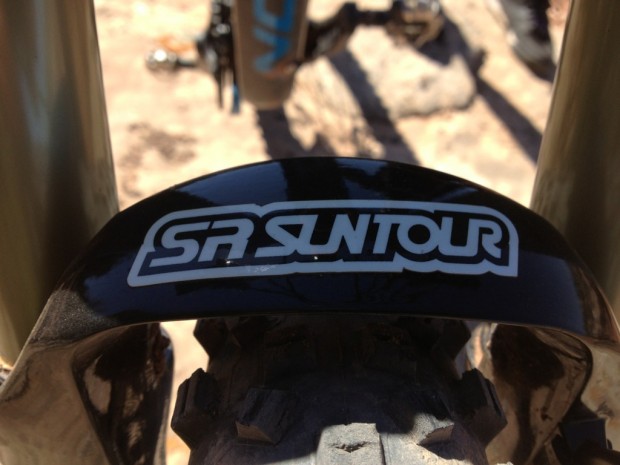 “We don’t feel comfortable growing on the low end anymore,” said Dan, so SR Suntour has decided to grow their high end lineup. Dan sees the brand-new 2014 Auron as a “turning point.”

Currently, SR Suntour is an OEM company, but as their high-end product line develops they’re seeking to expand into after-market sales as well. 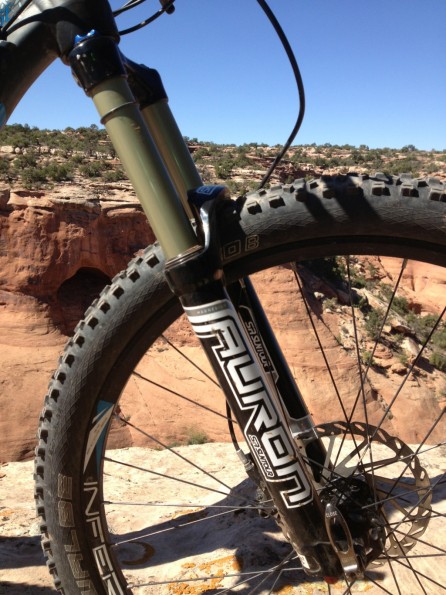 The Auron is a 150-160mm travel fork, and I tested it in the 160 configuration. The fork sports 34mm stanchions, and is currently only available for 27.5in wheels, although other forks in the SR Suntour lineup are available for all three wheel sizes. It features all of the major tuneability that you’d expect from a high-end fork with compression, air pressure, and rebound speed, but doesn’t go overboard with an excessive number of dials adjustments. 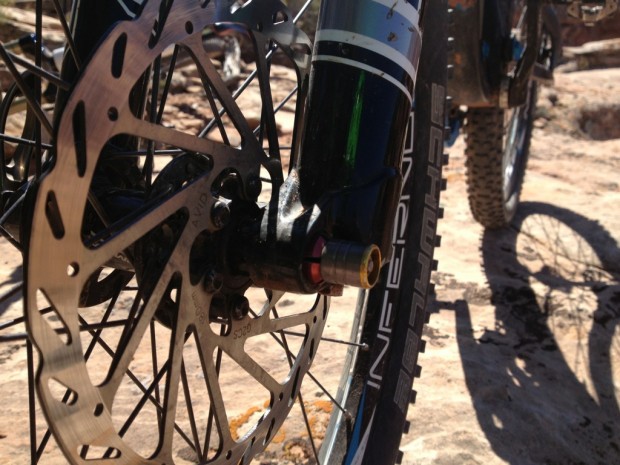 The fork comes equipped with SR Suntour’s innovative Q-loc quick-release through axle, which doesn’t utilize threads at all. More on this in the full review.

Weighing in at 1,930 grams, the Auron is set to retail for $650. According to Dan, SR Suntour is seeking to provide top-level performance at a very reasonable price, and they see the Auron competing with thousand-dollar forks from other companies. As a company, SR Suntour claims they can provide this high quality at such a low price due to their massive existing infrastructure and the large amount of raw materials that they are already bringing in.

Mag 7 proved to be the perfect testing grounds for this all-mountain fork. Thanks to the shuttle ride, while they were a few bits of climbing on the trail (and the main climb out from the bottom), we were largely able to focus on just shredding the descent! The trail itself was a mix of slickrock and dirt, but heavy on the rough slickrock sections. The rocky sections were filled with gnarly chunder fields to pin through, steep ledges to roll, and plenty of features to boost off of!

The scenery was fantastic as well, but it was difficult to pay attention to the gorgeous views with the trail demanding such intense focus. 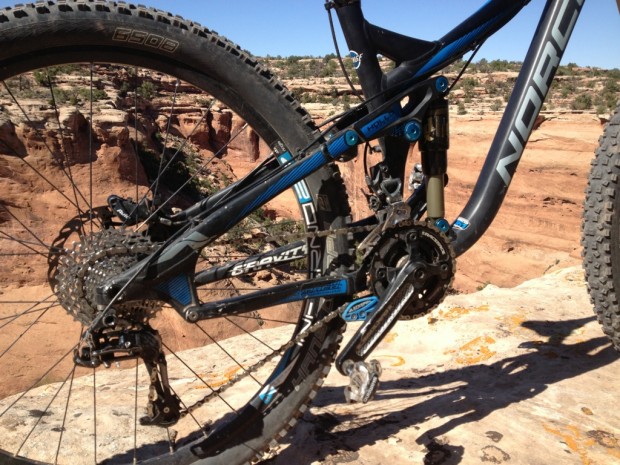 The Norco Range was an excellent test rig to have the Auron mounted upon. I was able to launch this bike off of three-footer after three-footer, landing on rough, off camber terrain, sliding sideways through turns on the rough slickrock… the fork took it all, and didn’t complain! This really allowed me to focus on the Auron’s performance. (By the end of the ride, I had completely destroyed the rear Sunringle wheel, though!)

Despite throwing this bike carelessly off drops and plunging into rock gardens with reckless abandon, the Auron soaked everything up and kept giving back! I never felt like the fork was undergunned, and despite working through almost all of the travel, I never felt a harsh bottom out. And, best of all (wait for it)…. 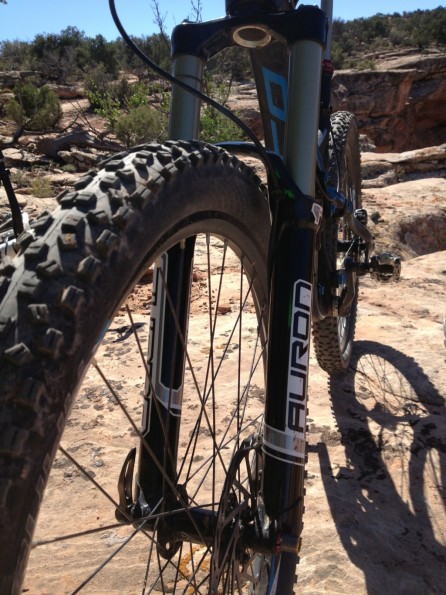 This may just be the smoothest, most supple fork I have ever ridden. From the very beginning of the stroke on the smallest of bumps all the way up to the big hits, the progressive travel is smooth, sleek, and effortless.

Of course, I’ll need to do a long term test of this fork to really see if this high-quality, super-smooth action persists over the long term, and if it’s really as hassle-free as SR Suntour claims. To that end, I have an Auron sitting in my office right this minute, just waiting for an all mountain 650b test mule to show up to mount it on! Stay tuned for a long-term review of this fork, probably sometime in early 2014.

Many thanks to Dan from SR Suntour for the fun ride, and for the fork for review.

More competition is always good for the consumer, so it is good to hear they are putting out a decent product. I do think SR Suntour will have to work on their image though. I, and I’m sure a lot of others, think of their forks as entry level material.

smoothest and most supple fork? wow, that says a lot considering how much you project test. I am interested in seeing the full review. Competition drives down prices and up quality 🙂

I was quite surprised at how well it rode! Although the Rock Shox Pike I’m currently riding is pretty fantastic as well. The thing is, so many companies are just creating awesome products these days… it’s good to see SR Suntour entering the market with such a quality product that’s such a departure from their low-end forks.