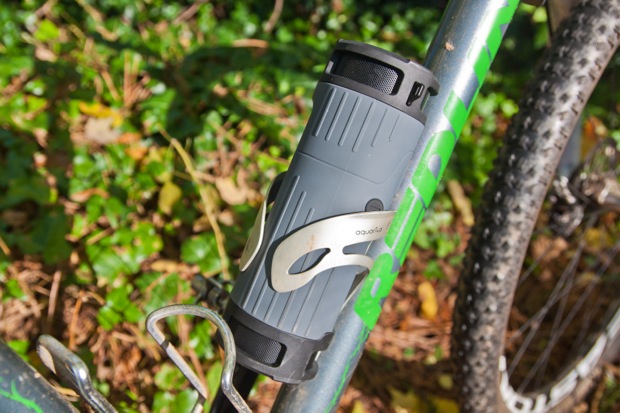 A lot of us do it, but mountain biking with headphones is just plain dangerous, no matter how we try to justify it. Heck, it can even be a little anti-social, if you ask me. But that’s not to say music doesn’t have its place on the trail–music gives pep to boring training rides and can provide a soundtrack to our flowiest moments. Enter the Scosche boomBOTTLE.

The boomBOTTLE is a 1-pound, bottle-shaped wireless Bluetooth speaker that fits in a standard bottle cage on a bike. It gets up to 10 hours of playback on a single charge and is designed to be rugged and weatherproof, two characteristics that come in extra handy on the trail. The speakers are multi-directional, pumping out 360-degree sound. 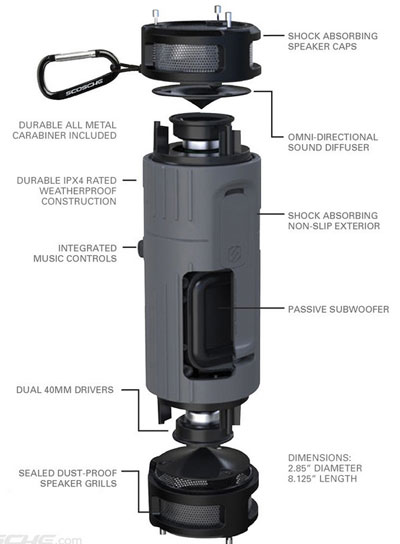 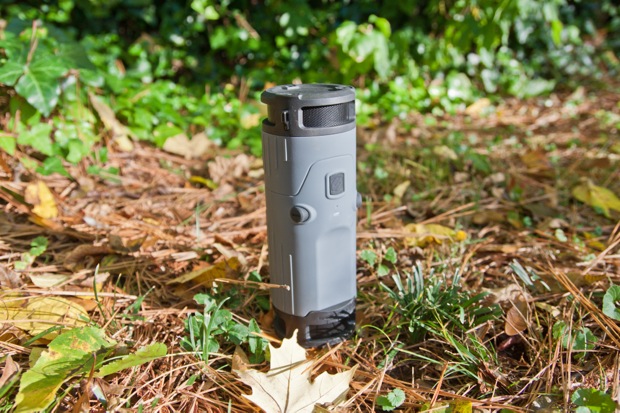 The built-in controls allow you to change the volume, and with select audio devices you can even use the boomBOTTLE to pause playback or skip tracks (though with a slightly laggy delay). There’s an integrated mic which allows the boomBOTTLE to be used as a speakerphone (hands free calling on your bike!) and also a 3.5mm aux input for use with older, non-Bluetooth audio devices. The boomBOTTLE charges via a micro-USB connector. 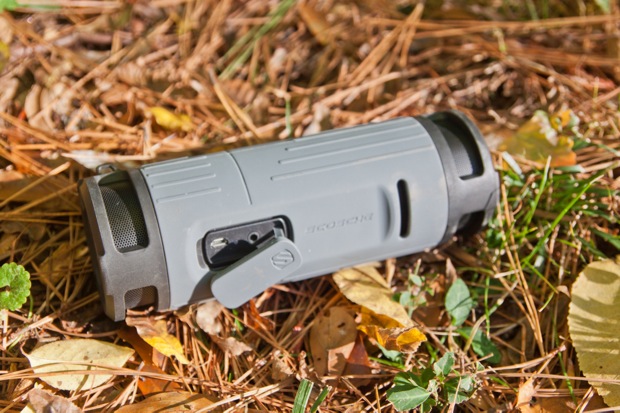 Based on my tests of the boomBOTTLE, I can say this is a very loud speaker indeed. I felt a little self-conscious listening to music on my commute home, afraid I was bothering the pedestrians I passed. But as I rolled up to a stoplight, I suddenly realized I was able to hear drivers’ car stereos all around me, and I didn’t feel so bad. On a crowded trail, I suspect one would get a few dirty looks (depending on your choice of music, of course), but at the same time, it’s a great way to warn others of your approach. There’s also the possibility of sharing music on a group ride–you know, if your group can agree on a soundtrack.

While the boomBOTTLE is loud and produces surprisingly deep bass notes for its size, the overall clarity is just average. I’ve been using this speaker in my office, and the clarity is much better than my laptop speakers, but not quite as good as my dedicated external computer speaker system. On the bike, I did get a few static pops during playback, and I don’t know if they were due to wireless connection issues or the speaker itself being jostled around. Scosche claims a range of 33 feet, and with my phone in my pocket and the speaker in my bottle cage, the connection was good.

The boomBOTTLE is a cool little Bluetooth speaker that can hang out in the office all day and pull double duty on the bike as well. It’s available from many retailers, including Walmart (!) for less than $150.

Thanks to Scosche for providing the boomBOTTLE for review.

Sounds (no pun intended) good to me, but I too wonder how many dirty looks one might get with Metallica blasting along the trail…

I hate when people play music on the trail. Big time, and this is coming from a musician. I feel it’s very disrespectful to pollute the environment, and that includes noise pollution.

+1 No music on the trail please.

Does the 5 seconds you encounter someone on the trail with music really bother you that much? Music is a motivator for many cyclists and a way to really enjoy the trail experience. If it were a yoga class then ya, keep the Metalica to yourself, but EPIC HEART PUMPING MOUNTAIN BIKING!? Give me a break.

I like music when getting busy with the girlfriend, but that doesn’t mean I turn the home theater up to 11 each time we get it on.

Want to listen to music? No problem. Put some earbuds in and listen at a level that will allow you to hear the person trying to get by you for the last 10 minutes yelling “ON YOUR LEFT! RIDER BEHIND YOU! EXCUSE ME! HELLOOOOO?!”*

Ultimately it is going to be a personal preference thing, I understand that. I could never run/bike to music, I found it far too distracting. Along the same idea of “pack out what you pack in,” I’m of the mindset of “don’t let my experience outdoors interfere with someone else’s.” External speakers go hand in hand with “interfere” in my opinion.

*personal experience, the guy didn’t notice me until a switchback.
Him: “Oh hey man, you should have said something.”
Me: “I have been for the last 10 minutes.”
Him: “Whoops, guess I should turn this thing down then, huh?”

I wanted to punt him over the side of the trail.