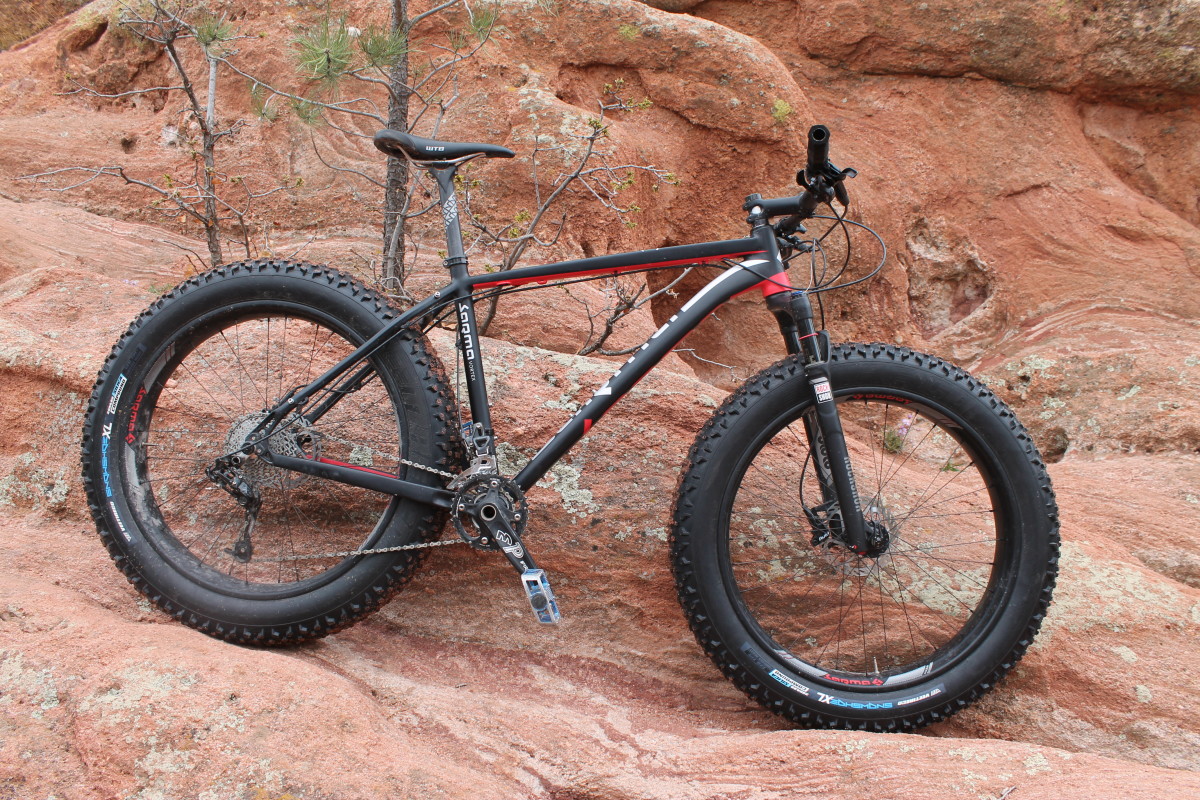 Some riders, especially those drawn to small or boutique brands, put a lot of stock in where their mountain bike originated.  This is no more true than in fat bike land, where name plates from cold, snowy places like Alaska and Minnesota get the lion’s share of buzz as “real” fat bikes.  If such a criterion is valid, then certainly a fat bike from Siberia should garner equal interest.  Sarma has their roots in the land we normally associate with the longest, harshest winters on planet earth, so if anybody should be able to design a bike for snow, they should fit the bill. 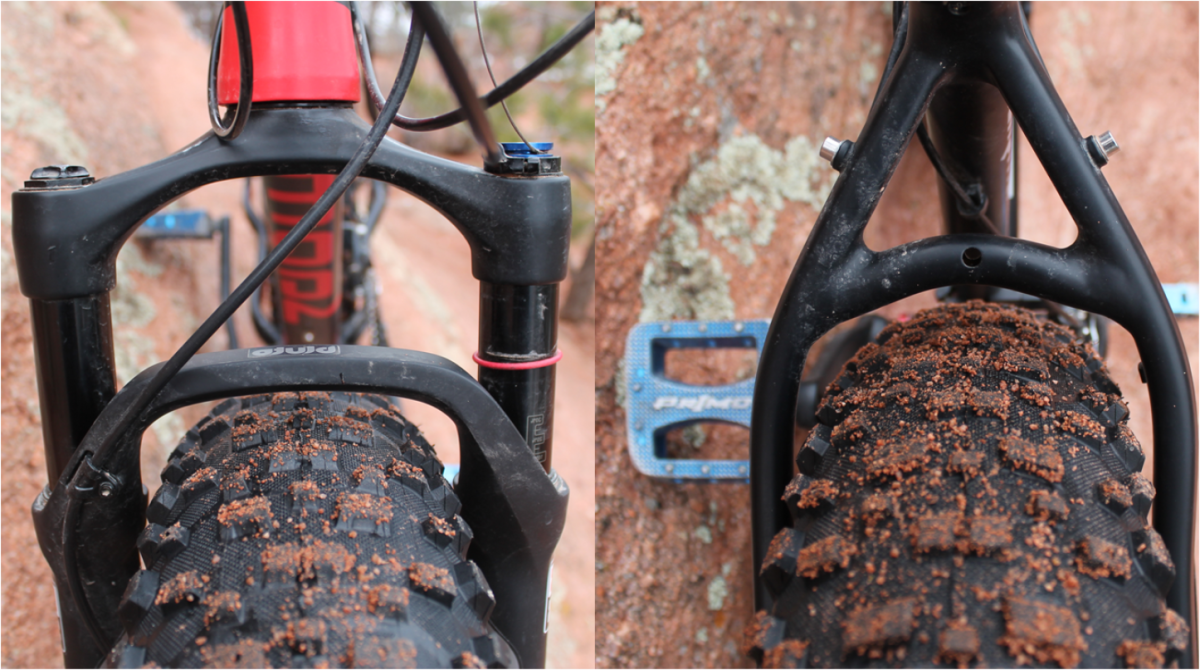 The Sarma Vortex 1.0 is an aluminum-framed hardtail fat bike, capable of running either a rigid or suspension fork and fully fat 4.8″ tires.  The base Vortex 1.0 model pings the MasterCard for $1,690 and comes with a rigid carbon fork and aluminum wheels.  My test bike carried upgrades to a RockShox Bluto suspension fork and 100mm Sarma Naran carbon fiber rims, bumping up the price another grand.  Standard components included a SRAM X7/X9 drivetrain, avid DB3 brakes, 4.8″ Vee Rubber Snowshoe XL tires, and a collection of house-brand controls.  Seating comes courtesy of a very nice WTB Silverado saddle.  All of this sits on a very attractive fame of hydroformed, triple-butted 6061 aluminum graced by smooth welds. 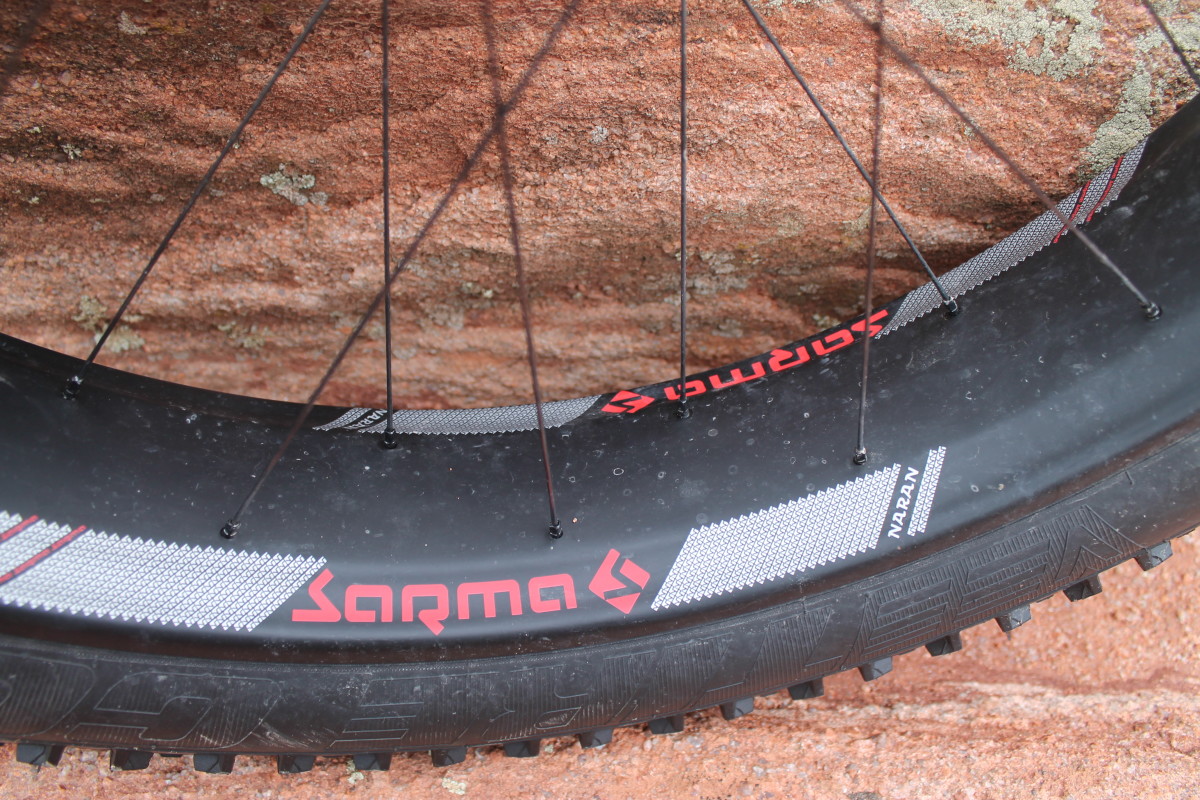 When I first put power to the cranks, I was pleasantly surprised with how the Vortex launched forward.  After all, this is a true fat bike that tipped my scales at a somewhat disappointingly-portly 35lbs.  But Sarma has done a very smart thing with this offering.  Most folks want carbon, but going full carbon is costly.  Without going full bling, the most popular option is to get that sexy carbon frame and hang the same old aluminum wheels on it.  However, rotating weight is felt to a greater degree than static weight, and lighter rims make a huge difference in responsiveness to pedaling. This effect is magnified on fat bikes, with their very wide rims comprising a greater proportion of the bike’s weight.  For equal or less money, putting superlight rims on a heavier frame makes a lot of sense with fat bikes. That unconventional wisdom shone through quite clearly on the Vortex. 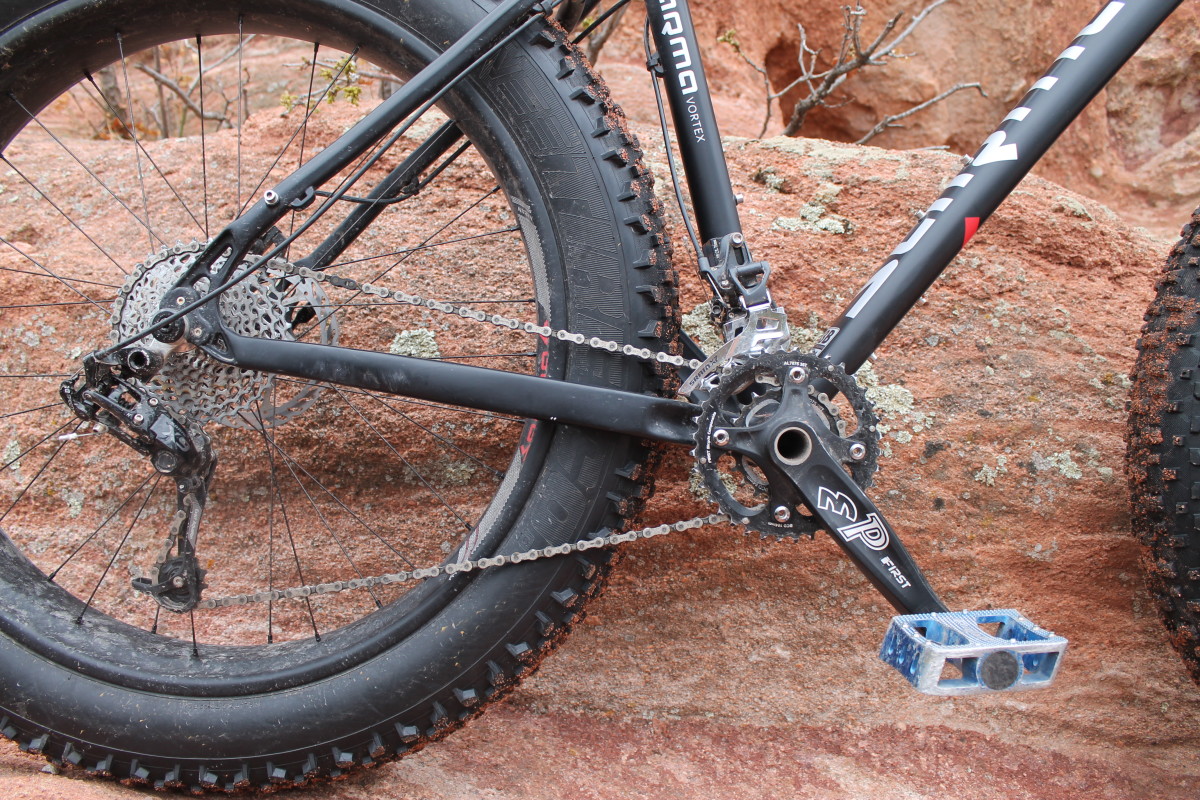 In describing the performance of the Vortex, I could simply say “It’s a Fat Bike,” and leave it at that.

Bikes are all marketed in a particular category, but within each category there is a wide variety of performance characteristics. Some bikes transcend their genre in one or more performance characteristics, but that transcendence is usually accompanied by a loss in some other characteristic endemic to the category.  Everything is a tradeoff.  The Vortex makes no tradeoffs: it is a fat bike through and through, with all the inherent relative benefits and drawbacks associated with the genre.  It is the very epitome of the breed. 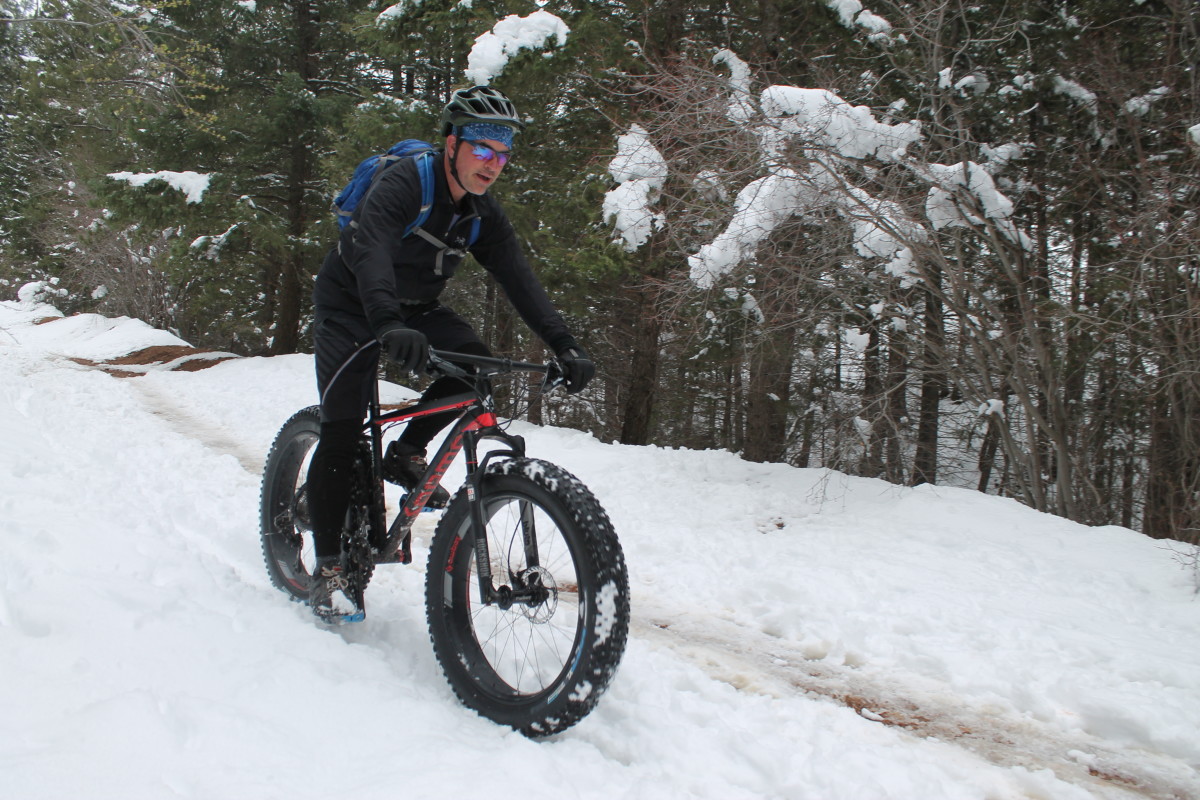 The Vortex required some effort in order to wring responsiveness out of its steering.  Bobbing and weaving didn’t come naturally, but after a few rides it did become second nature and actually got much better as speed increased.  Especially on hardpack, the front end was prone to autosteer and required constant attention to ensure staying on line.  I ultimately compensated for this by ensuring I always remained in a classic attack position whenever on uneven or twisty terrain.  For groomed snow and straight trails, I was able to relax in a lazy seated position.  The bike tracked perfectly on groomed or hardpacked snow, but quickly turned into a surf-fest as soon as it hit fresh snow.  To be fair to the Vortex, I attribute much of the steering difficulties to the under-spec of the Vee Rubber tires. There are other 4.8s out there that would perform better on both hardpack and fresh snow. 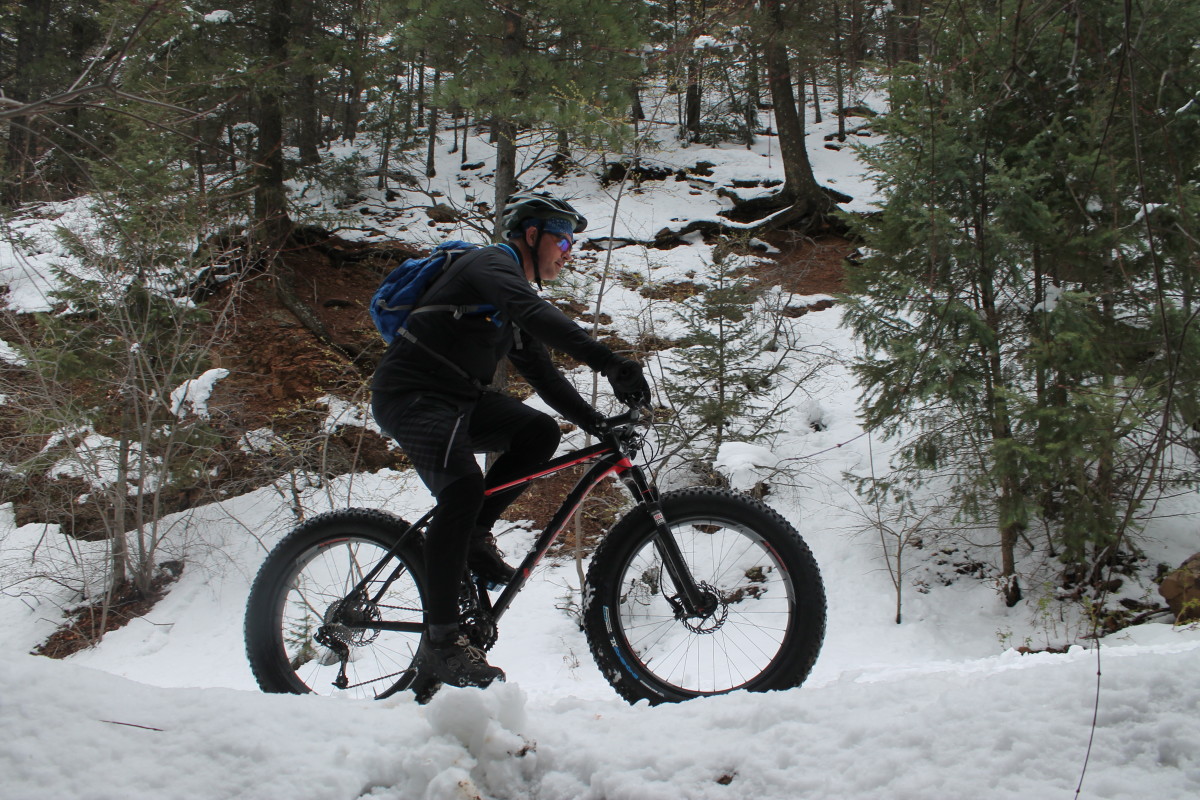 Another classic fat bike characteristic is the sensitivity to small changes in air pressure.  It took me a while to get the air pressure dialed in on the Vortex, and the “right” air pressure changed every time the terrain did.  Soft snow, hard snow, and dry land all required significantly different pressures to fully enjoy the Vortex.   Again, a more versatile tire would probably help.  It is worth noting at this point that as great as the Vortex was on firm snow surfaces, it was equally fun on technical singletrack, especially when the tread was filled with loose or embedded rocks, baby heads, and other typically bone-jarring features.  Once I found the right tire pressure for my weight, I couldn’t wait to take the Vortex out on just about every one of my usual rides that includes technical features, especially those technical features which tend to be more annoying than fun or challenging. 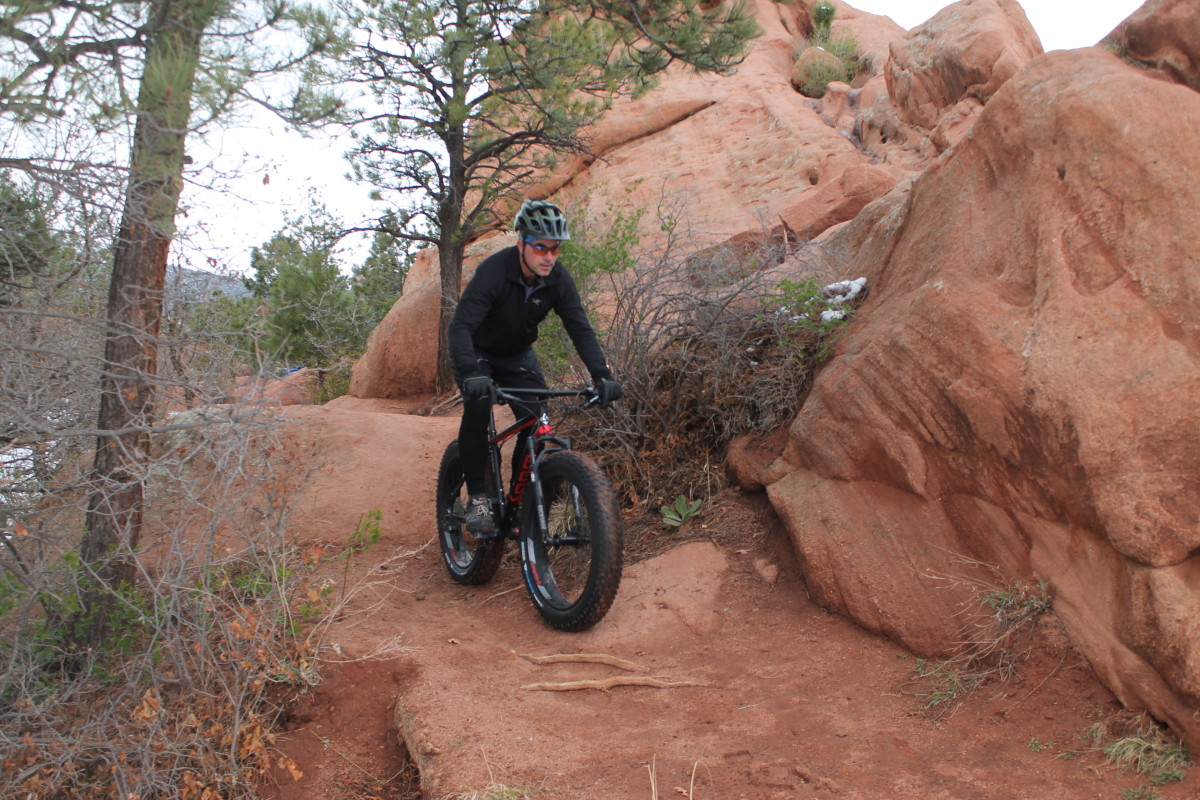 There are two things I would change. As previously noted, a tire upgrade would do wonders for this bike.  By combining a higher-performing (and lighter) tire with a conversion to tubless (easy to do with the carbon Naran rims), you could dramatically improve the handling of the Vortex while simultaneously saving a couple pounds.

The second thing I would change is that I would drop the upgrade to the Bluto and revert to Sarma’s carbon fiber rigid fork.  I ended up riding the Vortex with the Bluto locked out most of the time, reveling in the joy of rolling those big, squishy tires over all manner of obstacles. Rarely did I feel like the Bluto added to my capability… the only time being during high speed descents over very rocky terrain. The other 90% of the time I was far happier riding rigid on the Vortex.  The frame tracks true and the tires absorb a lot of punishment.  The fork swap would save a couple pounds (and $450) and suddenly, with these two changes, you’ve got your fat bike down to 30lbs with pedaling responsiveness that rivals bikes a couple pounds lighter than that. 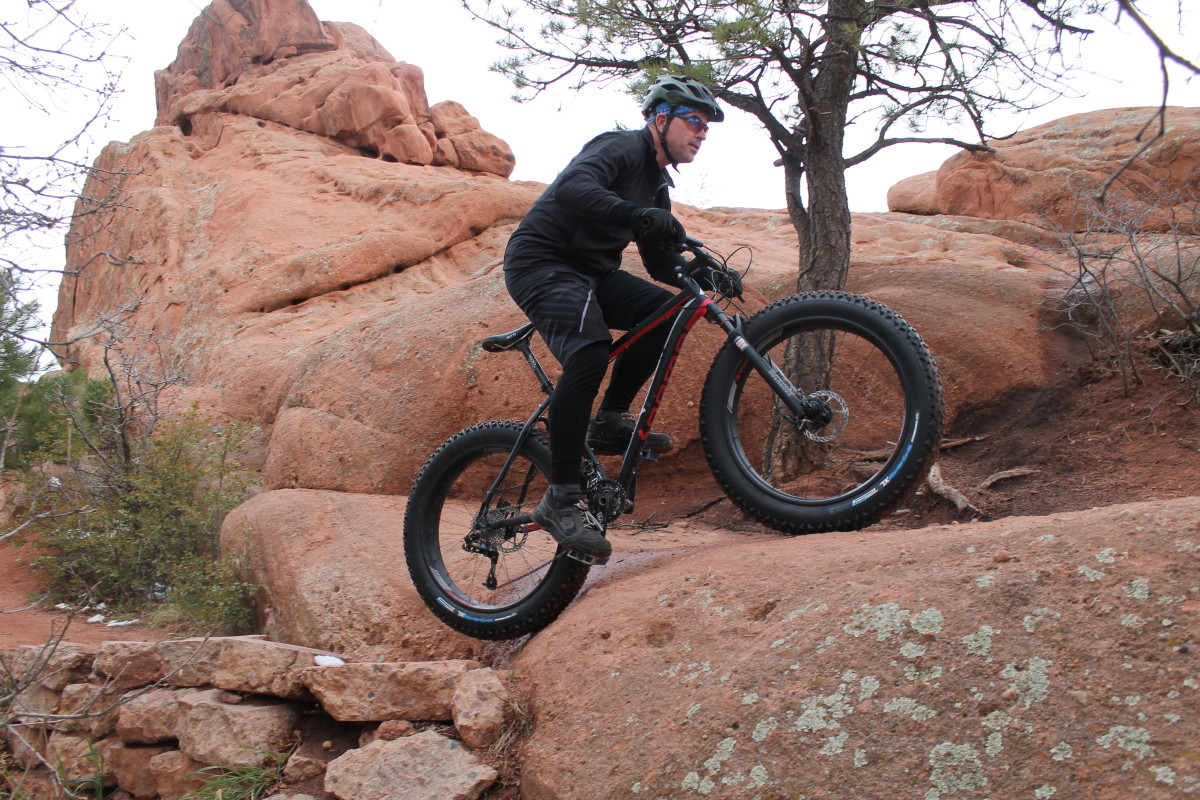 I noted two concerns with the Vortex.  First, the standover height seemed unusually high for the frame size.  I have a long inseam relative to my height, so this wasn’t a problem, but there were a couple instances where a little extra dexterity was required to dismount safely.  This may be a more significant problem for a rider of similar height but with a longer torso and shorter inseam.

Second, the bike arrived to me with a couple significant chips taken out of the otherwise very sharp paintjob.  At first, I thought nothing of it; this is a demo bike after all, and I thought it was great that the previous rider had probably given it a hard shakedown and I would get some more idea of long term durability.  However, after my third ride, all of which up to that point were mild mannered and crash-free, I noticed a third, even larger chip in the top tube.  I suspect the paint job on my Vortex hadn’t bonded well, and was easily damaged.

One typical fat bike trait that is definitely NOT a concern on the Vortex is calf bang.  The rear triangle on the Vortex is exceptionally well designed to provide maximum clearance for balloon-sized tires without interfering with any part of the pedal stroke, even for a fat-legged rider like myself.  Calf (and heel) bang are marvelously nonexistent. 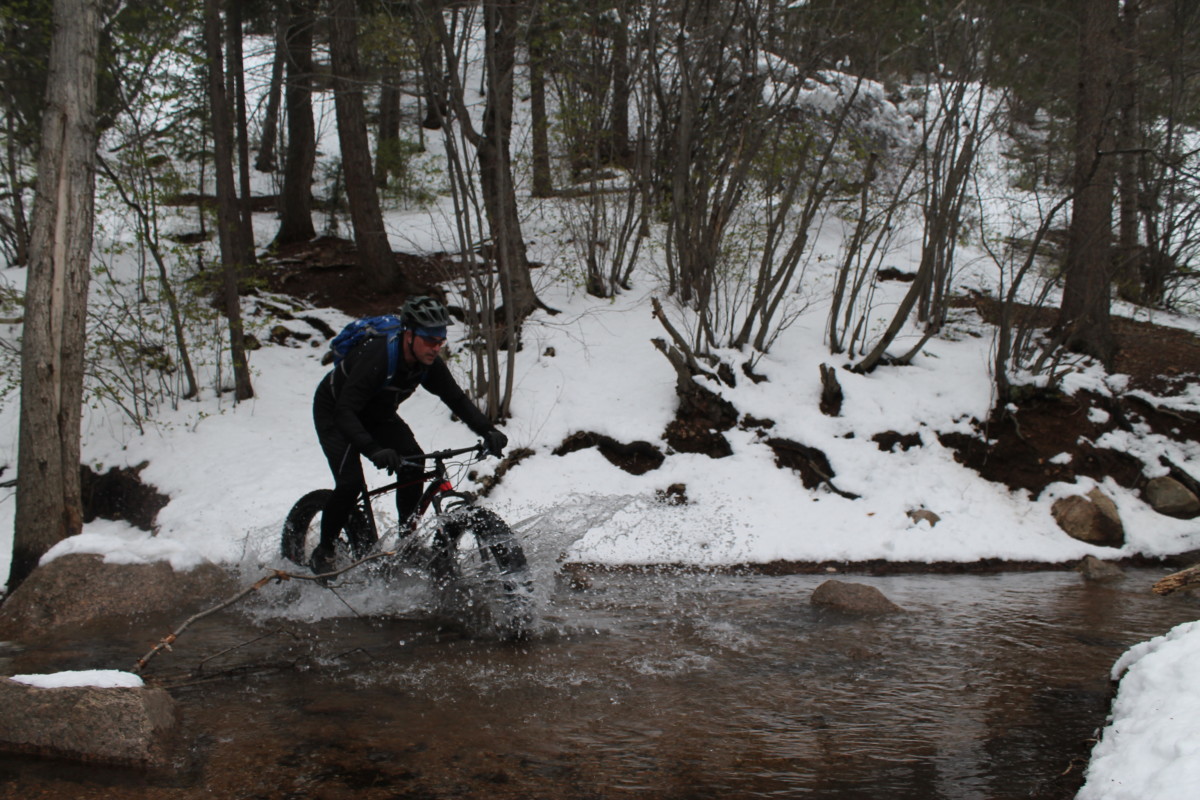 In much of Colorado, especially where I live, conditions change constantly through most of the year, and even in a single day.  A ride can include bottomless snow, bone-dry dirt, and everything in between, transitioning back and forth frequently due to changes in elevation and angle relative to the sun.  Given the Vortex’s sensitivity to these changes, it wouldn’t be my first choice as a fat bike for home.  However, if I lived in a place with distinct seasons where I could set up the bike for snow half the year and dry dirt the other half, I’d put it on my short list.

True to its Siberian roots, it handles snow well, especially if groomed or packed.  This would be an ideal rig for a place like Michigan’s Upper Peninsula or Northern New England, where the snow lands and stays for months, and where groomed or packed  tracks abound.  Then a single tire pressure adjustment when the snow melts has the bike ready for rocky summer fun.

Get some better tires, go tubeless, ditch the Bluto, and enter the Vortex! 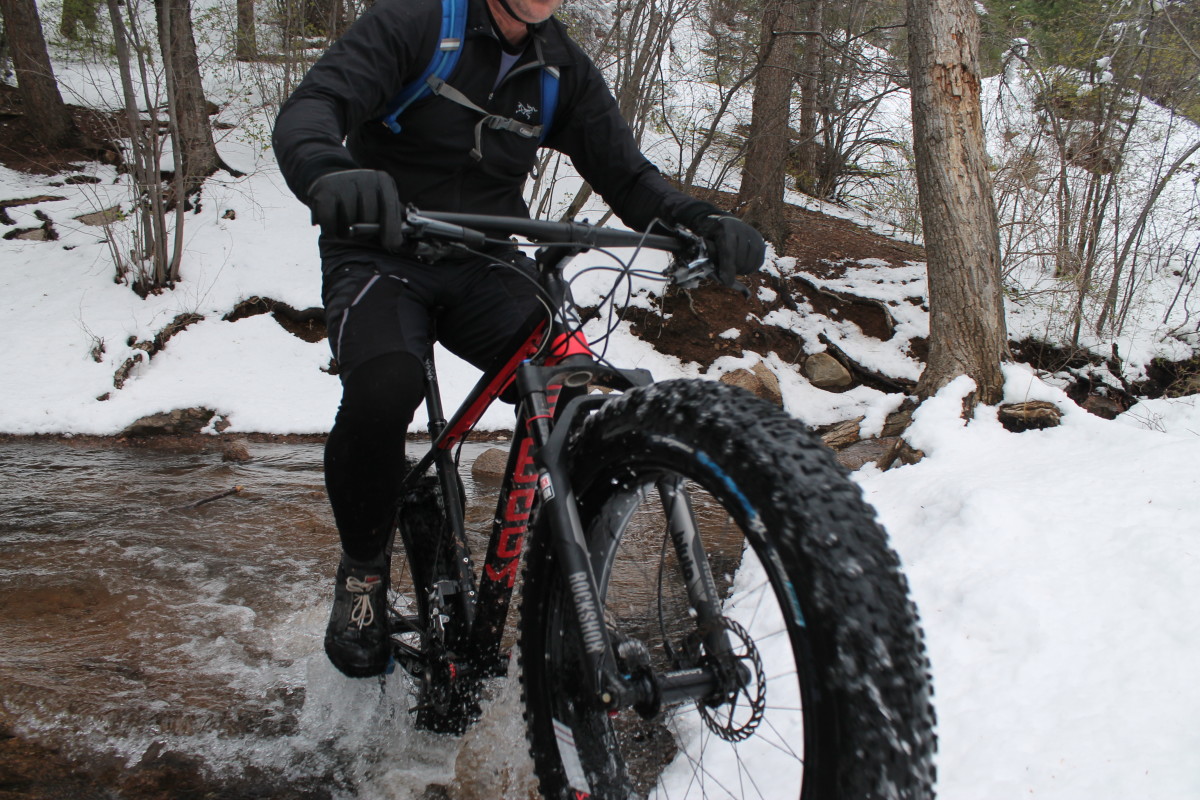 Sarma sells direct to consumer, so hitting their website is the best place to begin checking out this purest of fat bikes.