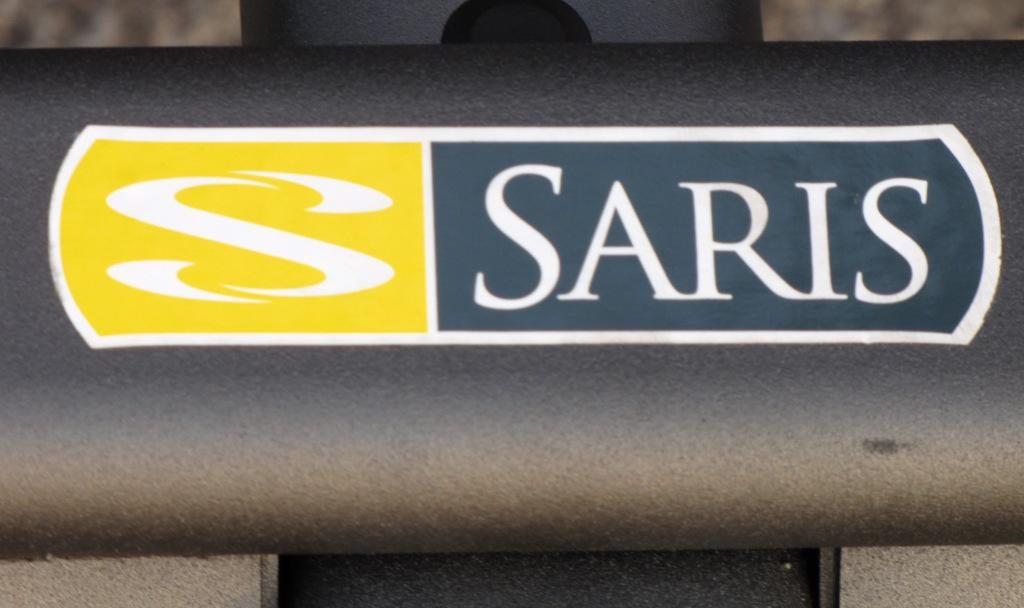 If you’re looking for a mountain bike transport system remember the name Saris! I’m rarely completely impressed with a product but this is one of those times. Today I will be reviewing the Saris CycleOn Pro two bike trailer hitch carrier (MSRP $439.99). I am so excited to talk about this product I am not sure where to start. For one thing this unit will fit any bike with any style frame, without the need for an accessory attachment bar. Even more important: the CycleOn does not touch your bike frame at all. 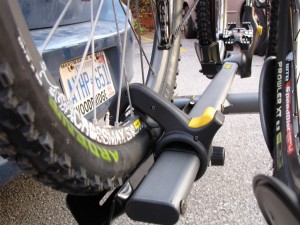 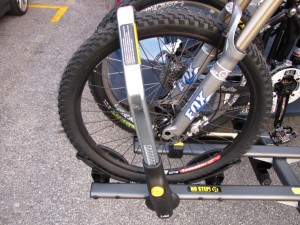 The CycleOn Pro locks the rear wheel in a channel which can be easily released with the push of a button. The front wheel is locked in with a shackle and two lower cups that can easily adjust to accommodate wheels from 20″ all the way to 29″. This is a great bike carrier for those who ride a gravity monster since the robust construction can handle two bikes at up to 60 lbs each.

Now I’m sure you’re all wondering if this carrier will work on your car / SUV / truck. Well, if you can add a hitch to your vehicle, you’re in luck (check with a hitch manufacturer like Reese, Curt, Hidden Hitch, or Valley). I chose to make my own hitch since I’m cheap and welding one up is a pretty easy job for me. Just remember you need to match the CycleOn Pro to the hitch; the 4017 model is for a 1 1/4″ hitch and the 4018 model is for a 2″ hitch. I have heard there will be a universal model in the near future (Jan 2010). 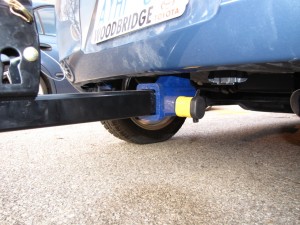 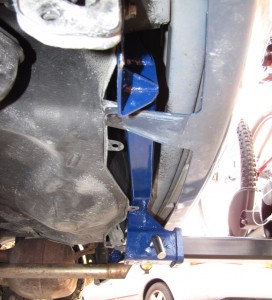 The photo above shows what the 2″ hitch looks like in the receiver. Adding a security lock to your CycleOn, standard on the Pro will set you back a few extra bucks but it’s well worth the investment to keep your carrier secure. The photo above on the right is an example of what an automotive receiver adapter looks like – try to pick one that bolts directly to your vehicle frame for a strong and worry-free installation. 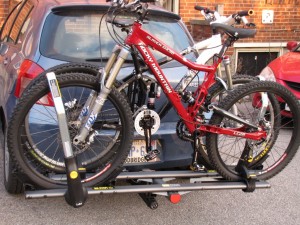 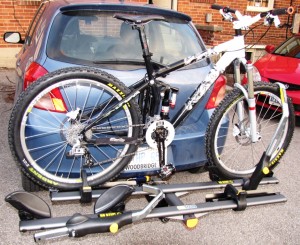 After using the CycleOn Pro on just a couple trips I quickly realized this was the bike carrier for me. It takes all of 35 seconds to load two bikes on the rack, which includes folding it down. There is plenty of space on the CycleOn so you don’t have to worry about your handlebars touching your vehicle. The super robust upright ratcheting arm will not allow your bike to sway and positively locks the wheel in position. Releasing it is a simple as pressing the release button. The unique wheel holding trays are designed to hold either a mountain bike or road bike (or one of each).

Some assembly is required with the CycleOn Pro so plan on about 30 – 40 minutes to put things together. If I had a single complaint about the CycleOn it would be the assembly instructions. The printed version that came with my unit was a little unclear and the graphics were blurry. Fortunately the online instructions helped clarify any doubts I had – what did we do before the internet anyway?

Taking my car and two bikes to the local trails and shopping mall (with tons of speed bumps) I was checking for any signs of the bikes coming loose or the CycleOn striking the ground. I found no faults other than a slight knock at the connection between the receiver and the CycleOn (slightly loose fit there). When your bikes are not on the CycleOn you can fold the unit with the simple pull of a pin and you’re good to go. Otherwise, remove the pin on the receiver and store the carrier away until you need it. I actually keep mine on the car since it doesn’t impede the regular operation of my trunk.

Overall I have to say this is one of the best bike carrier units I have used hands down. For its simplicity and ease of use, convenient bike lifting height, and simple flip and store feature no one comes close. Compare this to a roof mounted unit and you will quickly see the major advantages of using the Saris CycleOn Pro. No scratch marks on your roof from a misplaced pedal plus your back gets a break as well. Your door’s weather strip won’t get torn because of your rack clips digging in and no more stopping before driving into the garage. This carrier even helps you save on fuel over a roof rack (aerodynamics) which means more gas money for MTB road trips!

Thanks to the folks at Saris for providing the CycleOn Pro for a review.

This Saris hitch rack is a bit on the expensive side, but it is an extremely secure and stable system for carrying up to 4 bikes. The rack doesn’t even touch your bikes frame, only grabbing the wheels, so there will never be any wearing or scratches to your bike from straps etc.