The Instinct has reigned as Rocky Mountain’s long-ish travel 29er trail bike for some time now. I rode the Instinct during the BC Bike Race back in 2014 and found it to be an ideal bike for long days covering techy terrain. The Instinct’s front triangle also formed the heart of Rocky’s Pipeline plus bike, which I rode in Moab earlier this year.

Over the past year Rocky Mountain relaunched the Slayer as well as updated versions of the Altitude and Element, so it was only a matter of time before the long-in-the-tooth Instinct got a refresh.

The Instinct is actually the platform for three distinct bikes. Up first is the Instinct, a 29er with 140mm of travel front and rear — an increase from 130mm rear on the previous generation. Then we have the Pipeline plus bike, also with 140mm (f/r) of travel. For maximum rock smashing capability, the BC Edition Instinct ups the travel to 155mm rear mated to a 160mm fork.

Rocky uses a taller bottom headset cup to keep geometry inline between the Instinct (non BC Edition) and the Pipeline. All Instincts and Pipelines will ship with a short and tall headset cup so riders can swap back and forth between 29 and plus if they so desire. Geometry on the Instinct and Pipeline can be further adjusted via Rocky’s Ride-9 chip system in the suspension linkage.

To create the BC Edition Instinct Rocky uses a different link that forgoes the Ride-9 adjustability. Essentially it’s a link that is fixed in the lowest/slackest setting. That gets paired with a longer stroke shock to eke out those extra 15mm of rear travel. The BC Edition gets 20mm more front travel and a burlier component spec.

With three bikes — two of which have adjustable geometry — we could be here all day running through the numbers. If you want full geo, be sure to visit Rocky Mountain’s website. The main takeaway here is the Instinct and Pipeline are longer, lower, and slacker than their predecessors. No surprise there. Reach is up substantially, the bottom bracket drops a few millimeters, the head tube kicks back, and the chainstays get nearly 20mm lopped off.

Rocky didn’t just LLS the bikes and call it good. They took the opportunity to add a host of new features. These include:

Previous Rocky Mountain models used the initials MSL to denote a carbon fiber frame. Moving forward, Rocky is simplifying their naming convention by simply stating the frame material in the model name. For instance, the highest spec’d model will be called the Instinct Carbon 70, and the highest aluminum model, Instinct Alloy 70.

In all, including the BC Edition Instinct, there are six models — two alloy and four carbon. There is also a frame-only option for the BC Edition. Every model gets a 1x drivetrain, a dropper post, 180mm rotors front and rear (200mm on the BC Edition), and tubeless Maxxis tires. 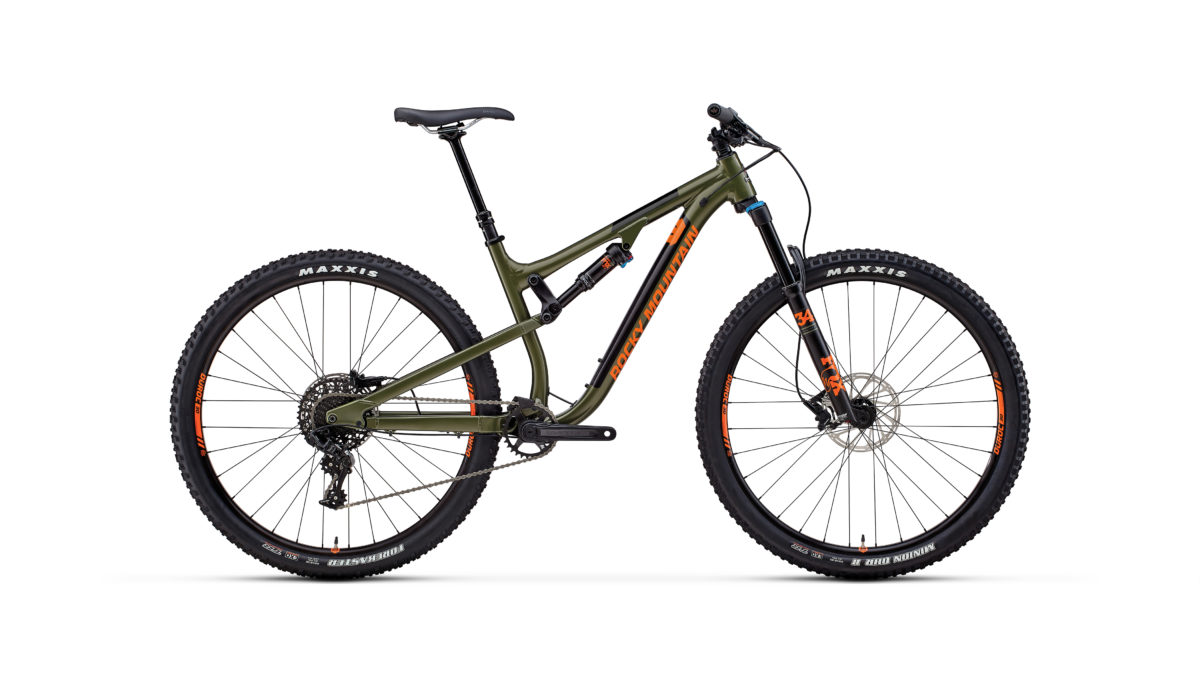 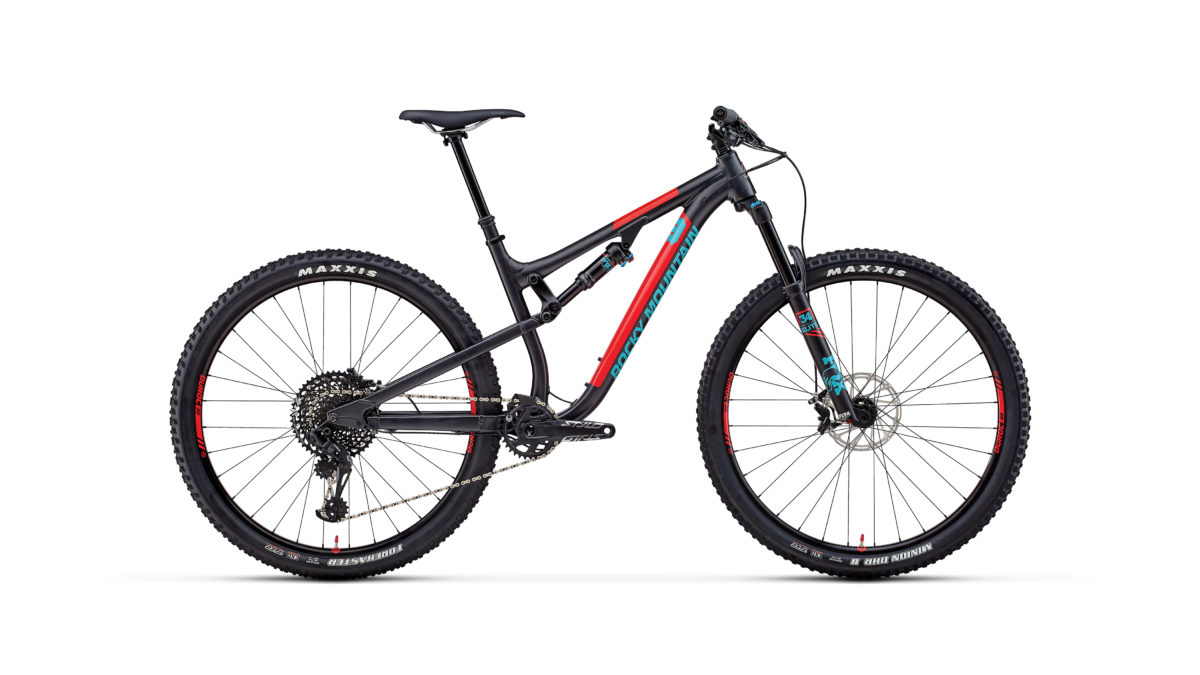 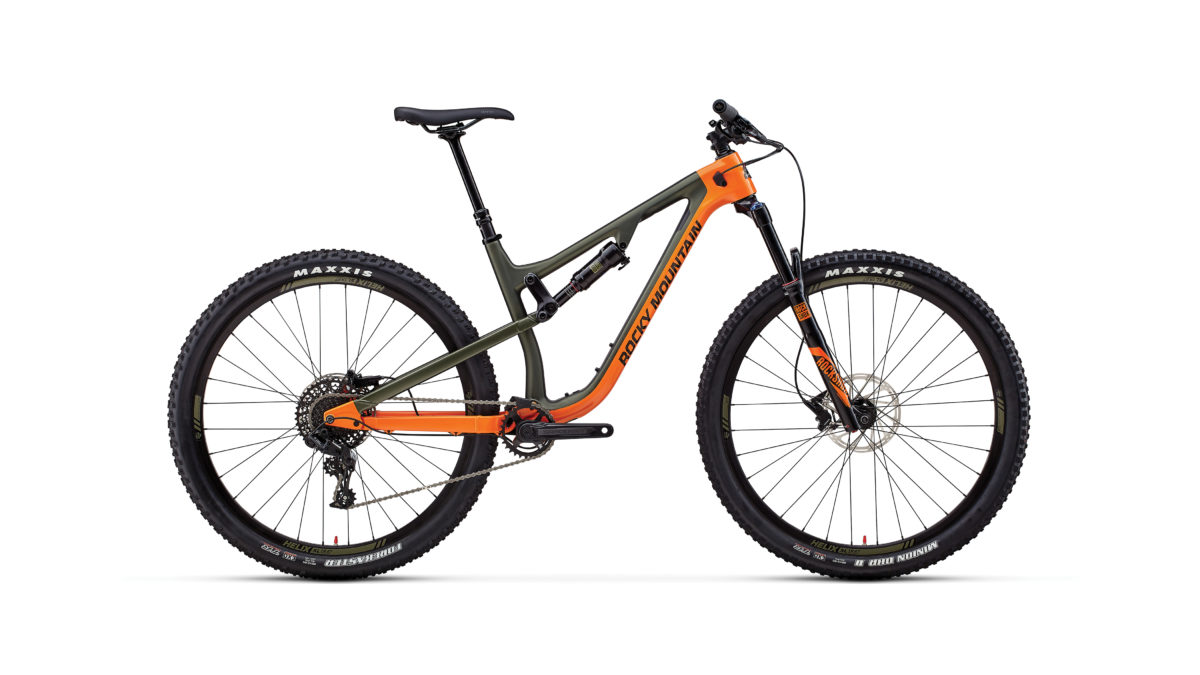 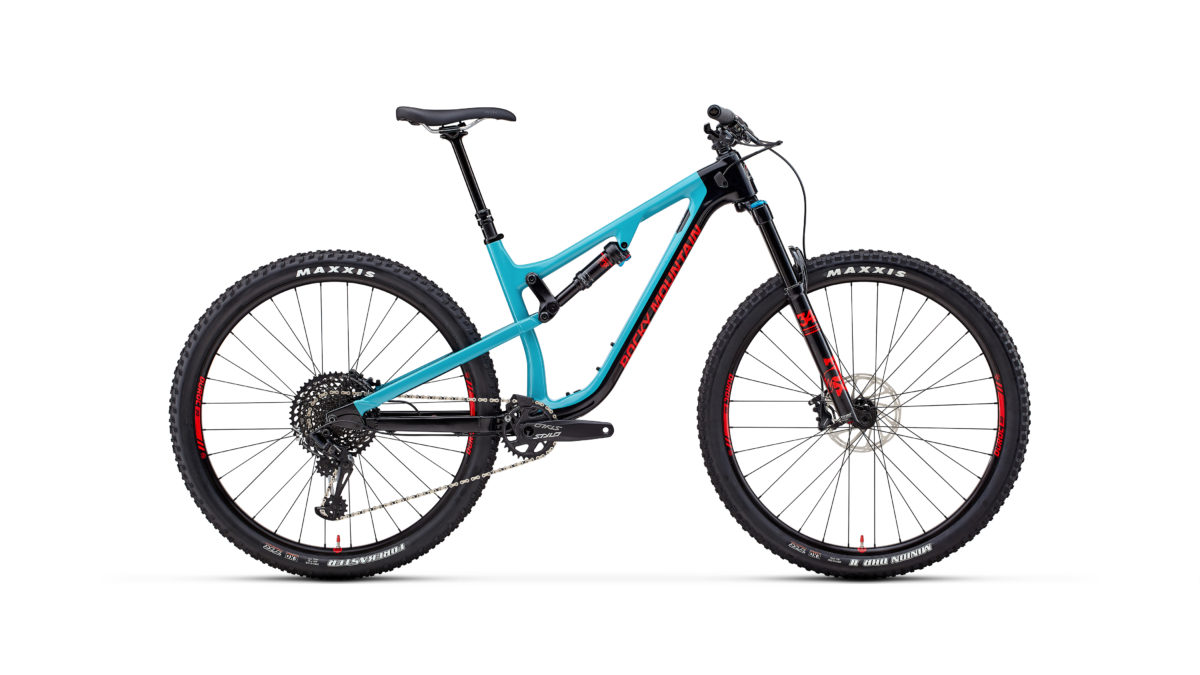 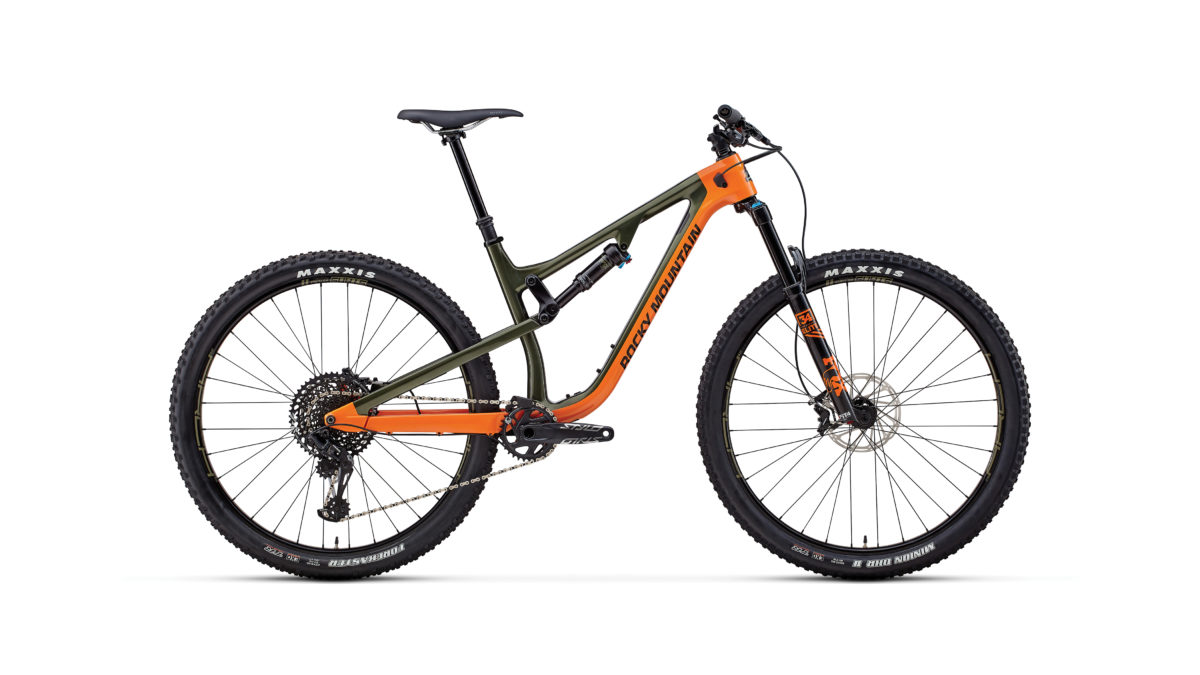 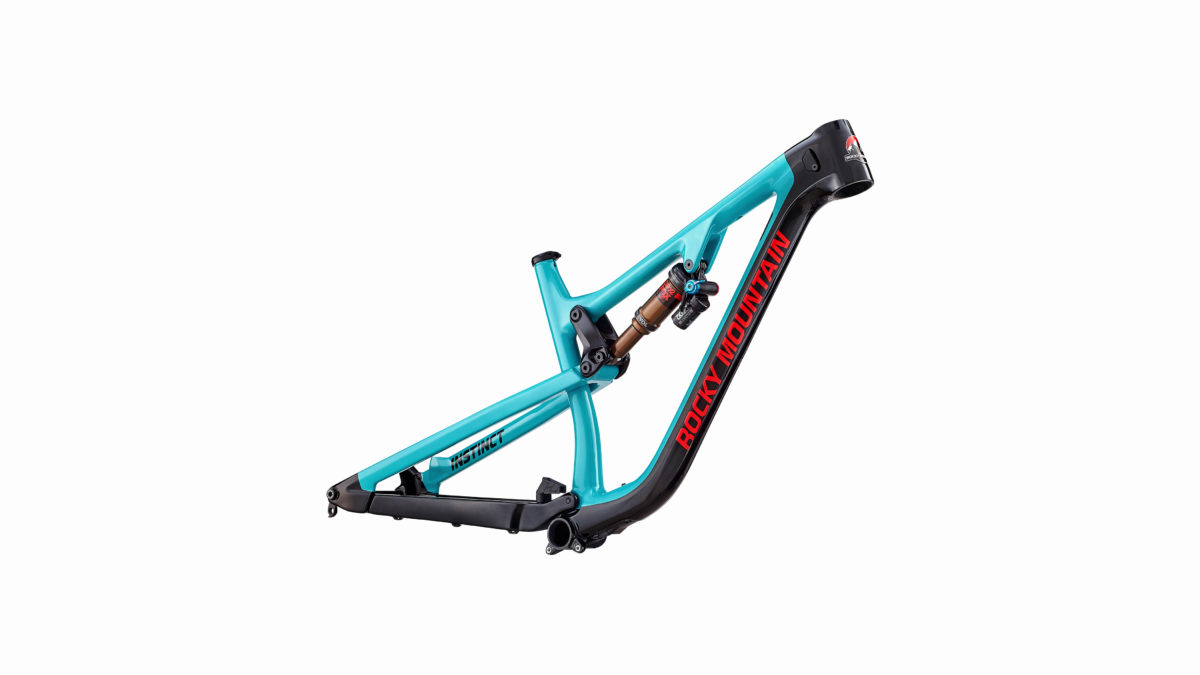 On the Pipeline side, there are four models; two each carbon and aluminum. Similar to the Instinct we see 1x drivetrains, Maxxis tires, and 180mm rotors across the board. The entry-level Alloy 30 is the only model without a dropper post stock. No frame-only option is offered. 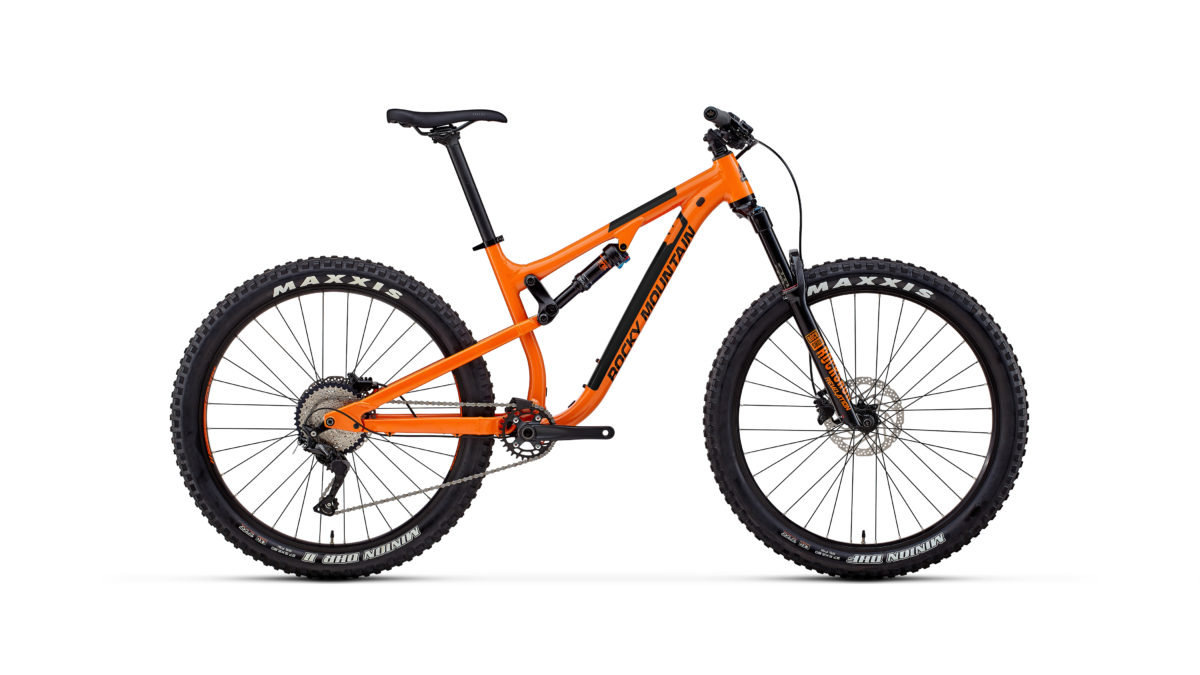 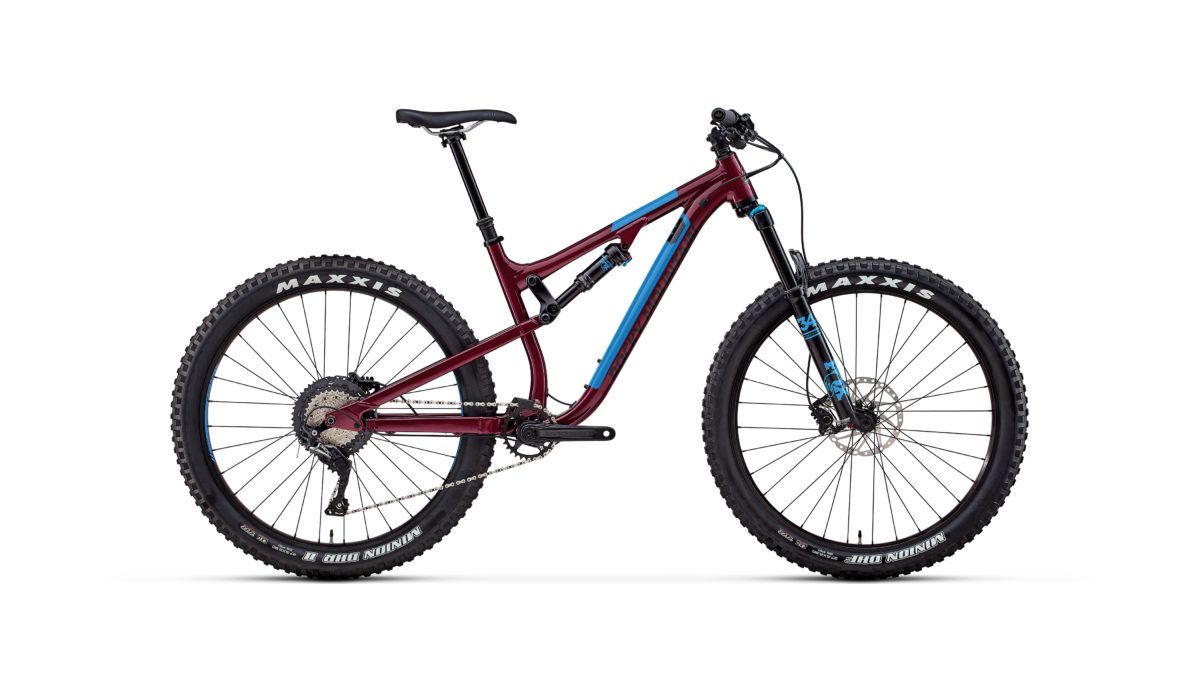 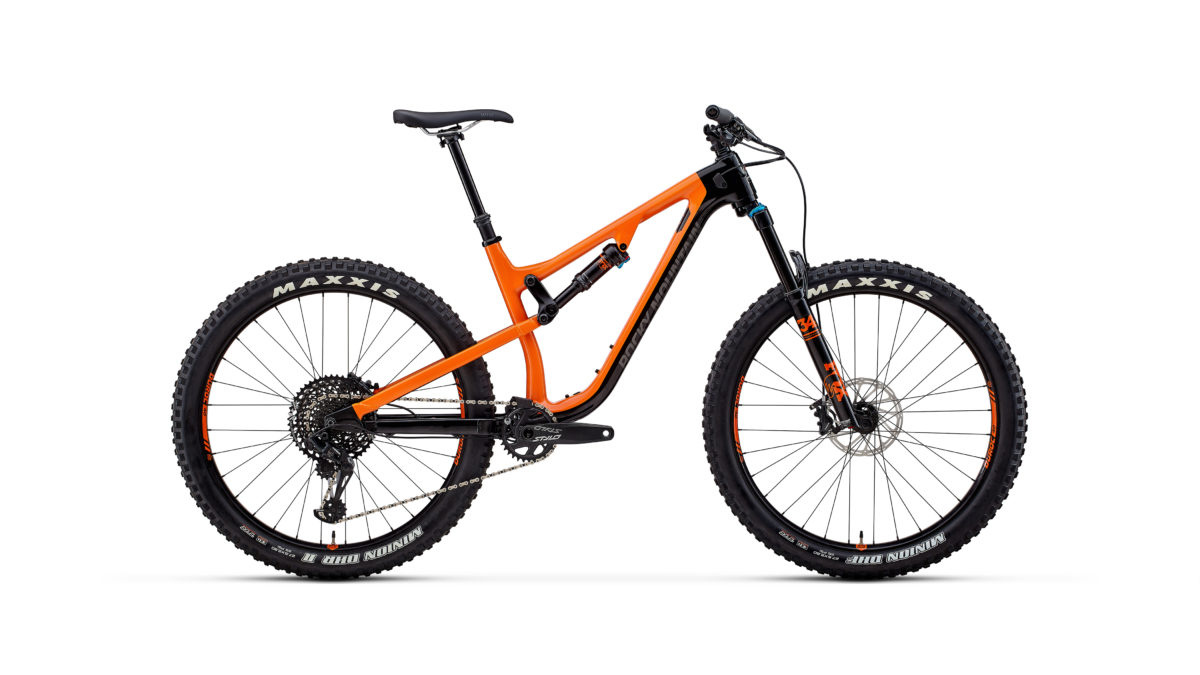 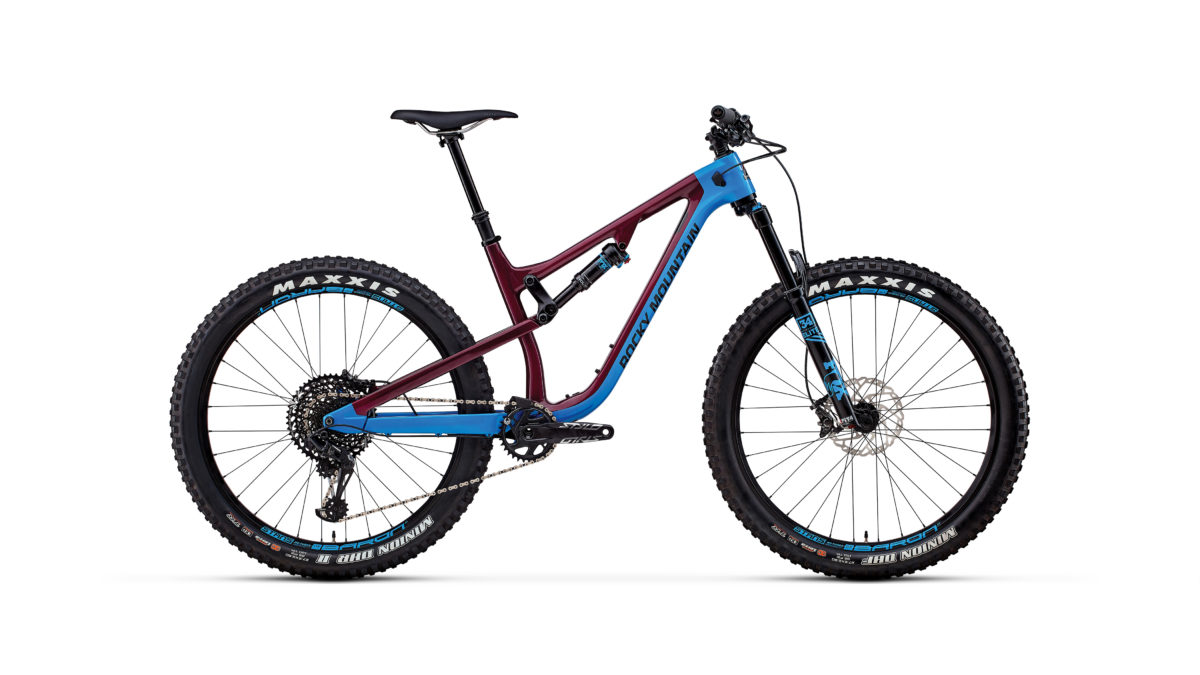 I had the opportunity to get out for a brief ride on the new Instinct while I was in Whistler for Crankworx last week. Rocky Mountain had the BC Edition and the Pipeline on hand as well, but since the standard Instinct is the main platform for all of the bikes above, it made the most sense to ride that one. I rode the Instinct Carbon 70 in a size large.

First thoughts? It’s a damn-fine-looking machine. Like the Element I reviewed earlier this summer, the Instinct cuts a striking profile helped in no small part by the single-sided pivot hardware. The downtube is large but the top tube is flattened, preventing the bike from looking too chunky. I was also a big fan of the Tank Girl matte green and Fox Racing orange paint job. Claimed weight for the bike with a medium frame is 27.4lb so naturally, my large framed model would be slightly heavier. I didn’t have a scale on hand for an independent measurement, but I’m inclined to believe Rocky’s numbers.

Our test loop consisted of a pedal over to the Lost Lake trails at the base of Blackcomb mountain. It was a relatively short route, but it threw a little bit of everything at us: steep climbing on loose gravel, steep climbing on technical singletrack, steep rock rolls, steep tight switchbacks, and steep rooty sections. Did I mention it was steep?

In terms of fit, I got along with the bike right off the bat. I have long arms, so I appreciated the greatly lengthened top tube. Reach is somewhere around 460mm for the size large depending on where the Ride-9 system is set. The bike had plenty of get up and go thanks to its reasonable weight and lively suspension. Similar to the Element, each compression setting on the Fox shock gave the Instinct a unique feel. For the initial climb I played around between the open and middle settings before settling on the middle position. The increased platform kept the bike riding higher in its travel and prevented the rear end from hanging up too much in the countless holes between roots and rocks.

I did find myself struggling to keep the front wheel tracking straight on the steepest of punches, though. In addition, I found myself smacking the pedals regularly on the first singletrack climb. Since I was riding flat pedals this meant I ended up walking a couple sections after my feet got knocked off the pedals. Honestly, the first bit of the ride was frustrating. It probably didn’t help that I was pretty worn out from turning park laps, either.

However, the grade of the climb eventually relented while the technicality increased. Here, the bike and I began to gel. I got my pedal timing figured out and it wasn’t long before I was cleaning chunky section after chunky section. I still had trouble controlling the front end when it was really steep or around tight switchbacks, but I was able to manhandle my way through those parts.

There are a couple reasons for the pedal strikes and light front end. For one, the Instinct was in a slightly slacker than neutral position. A rearranging of the chips in the Ride-9 system would raise the bottom bracket as well as steepen the seat tube — both of which would have been beneficial in this type of terrain. The other reason had to do with the cockpit — the stem had a positive rise and there were a couple too many spacers underneath it. Flipping the stem over and/or removing some spacers would have helped rein in the wandering. This was a short ride on a compressed timeframe (it was getting dark) so I opted to keep things moving rather than make trailside adjustments.

Once it was time to get down the mountain, I appreciated the low bottom bracket and short chainstays. I smashed my way down the trail pumping the terrain, gapping root sections, and generally rode like a fool. Steep rock rolls were tackled with confidence. The front wheel was lofted with ease.

When I could see the steep punches coming up, all it took was a few quick pedal strokes to give me enough momentum to reach the crest. The quick-shifting GX Eagle drivetrain was a big help in this regard. In terms of the other components, there are certainly more expensive options out there, but this bike has everything you need to take it on any trail: a stout fork, big brakes, plenty of gears, and sturdy wheels. The Maxxis Forekaster was probably at the top end of its capability on Comfortably Numb, but it held up despite being bashed into countless sharp rocks on the way down.

There’s a whole lot to like about Rocky Mountain’s new Instinct and it showed a whole lot of promise on my brief test ride. It has enough travel to take on unknown backcountry trails, but not so much that you would regret pedaling it there. With a couple easy changes to the Ride-9 system and the cockpit, I’m sure this bike and I would get along much better on the ups.

We’ll have one in for a long-term test shortly, so be on the lookout for that in the coming months. In the meantime, visit your local Rocky Mountain dealer to check out the Instinct or Pipeline in person. Shops will begin getting stock this month, with greater availability coming in October.

Gear
Mountain Bike Tire Repair Tips: From Emergency to Semi-Permanent
Gear
Never Underestimate the Power of a Good Zip-tie
Gear
These MTB Deals are Fire, including 40% off Patagonia Dirt...
Gear
The Maxxis Minion DHF Tire is Still the One to...
Subscribe
Login
Please login to comment
1 Comment
Most Voted
Newest Oldest
Inline Feedbacks
View all comments