Yakima is well-known in the world of bike racks, offering a variety of ways to transport your bike, with options for virtually every type of vehicle available.  A few months ago I received a Highlite 3 to review, and it’s basically been on the back of my car ever since.  Read on to see how well it does the job. 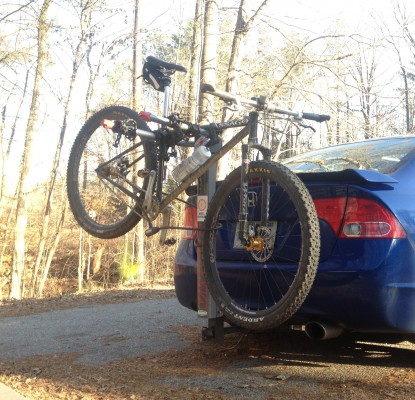 The Highlite 3 is a three-bike, hitch-mounted, hanging-style rack–meaning it goes into a receiver hitch on your vehicle, and the bikes hang from the rack.  It’s made mostly of aluminum to keep the weight down, and weighs less than 20lbs.  Its dual arms support the bikes by their top tubes, with plastic cradles that use rubber straps to keep the bikes secure.

The rack can tilt back to allow access to the vehicle’s tailgate or hatch, and the arms fold down out the way when not in use.  It comes with two nylon straps to prevent the bikes from swaying, as well as a built-in cable lock to lock the bikes to the rack.  It also locks into the hitch receiver so thieves can’t simply take the whole rack and bikes with them.  It will fit either 1-1/4in or 2in receivers, and carries an MSRP of $359.

Some assembly is required when you receive the rack, but the instructions walk you through it step by step, and the required tools are included.  The rack is light thanks to the alloy construction, and with the arms folded down it’s fairly compact, making it easy to move around and put on/off the car.  There’s a pin that goes through the receiver hitch and into the rack, to keep it from falling out, and there’s a knob that lets you tighten the rack into the receiver to keep it from wobbling around.  The knob includes the built-in lock to secure the rack to the vehicle.

Living with the Highlite: The Good

The Highlite is an extremely well-made product.  The fit and finish is top notch, and there’s no slop or play in any of the various parts.  I have no doubt it will serve the owner well for many years.

One of my favorite features of the rack is how solid and stable it is: this thing doesn’t move–ever.  No swaying in the wind, and no bouncing up and down after you hit a bump in the road.  And once the bike(s) are mounted up, they’re on there solidly as well.  It’s nice not to have the bike moving around in your review mirror when you’re doing 70+mph down the freeway.

Before I pulled the fenders off my road bike, the Highlite was the only rack I had that would work for that bike, since it supports the bike by the frame and doesn’t grab the wheels.

Living with the Highlite: The Not-So-Good

Putting the bikes on and off takes a lot more time and effort.  There are three rubber straps you have to deal with (which you often have to pull very hard to get them tight enough, since the mounting holes are spread out so far), and then you have to use a strap or two to keep the front wheel from flopping back and forth in the wind, and keep the bikes from swaying out when you’re drag racing from red light to red light. And then, if they will be left unattended, you need to lock the bikes to the rack.

Also, getting some bikes on the rack will be impossible.  The two arms barely fit through the triangles of my medium/large-size hardtail frames, and with both bikes I had to remove the water bottles.

If you own a dual suspension bike, it will probably be more difficult, if not impossible, to haul your bike with this rack. Yakima does have an accessory called the TopTube that acts as a virtual top tube for FS frames, but depending on your vehicle it may leave the bike hanging too low to the ground.  It might be fine if you drive an SUV, but it wouldn’t work with my lowered Honda.

However, a TopTube adaptor isn’t always necessary for a FS bike: sometimes you can finagle a dualie onto the rack by mounting to the inside of the top tube and the downside of the downtube. Also, certain suspension designs do offer enough room inside the front triangle for mounting on hanging-style racks… you just have to have the right one.

Finally, the rack may obscure your license plate, which is illegal in most states.  It’s not an often-enforced law, but it’s not unheard of for bike racks to result in tickets.

The included cable lock is a nice idea, but in practice it could be much better.  It’s really thin, and a pair of bolt cutters would go right through it.  Also, it’s way too short: you can’t get it through both wheels and the frame.  If you’ve got a nice set of wheels, you definitely want them locked up, since they’re so easy to steal.

While the Highlite 3 is technically a three-bike rack, I don’t think it would be possible to actually get three full size bikes on it.  I could barely get two bikes on mine, and I tried various combinations of two different 29ers, a road bike, and my wife’s XS-sized mountain bike (which I had to rig up to make the tiny front triangle work with the rack in the first place).  The problem I had was that handlebars and saddles were always trying to occupy the same space at the same time.  I could get two bikes on there, but they were always jammed up against each other.

For what it is–a lightweight hanging-style rack–the Highlite gets 4 out of 5 stars.  A better cable lock would earn it that 5th star.  But, in the world of hitch-mounted racks, overall, I’d give it a 2.5 out of 5.  It’s not that it’s bad, it’s just that, in my opinion, platform-style racks are a much better option for most mountain bikers.

I’m not sure why companies still even make so many different hanging-style racks (Yakima has 5 different styles).  Platform racks offer more adjustment when mounting the bikes, letting you fit two on the rack without them rubbing against each other.  Some don’t touch the frame, so there aren’t any scratches to the paint.  They work with any size or style of frame.  On the downside, they’re typically more expensive, heavier, and larger, so they’re more difficult to move and store when not on the vehicle.  And as I mentioned before, if you have a bike with full-length fenders (either a road or beach cruiser), they’re not a good option. But, for your average mountain biker, I think they would be much happier if they spent the extra money on a platform-style rack, such as the Holdup.

Thanks to Yakima for providing the Highlite 3 rack for review.  To learn more about Yakima’s various rack offerings, visit their website by clicking here.

Culture
What Type of Rack do You Use to Haul Bikes...
Gear
Cool Gear from Interbike 2012: Formula, Yakima, and Much More
Gear
Review: Yakima FrontLoader Universal Bike Tray
Gear
DIY: How to Build a Hanging Bike Rack

Don’t buy Yakima junk. I’ve worked with both Yakima and Thule for 10 years, and Thule has far superior products. Thule’s Helium aluminum hitch mounts predate Yakima’s and the fit and finish is way better. The locking cable is also easier to use and thicker. I can think of at least 5 products that Yakima has blatantly copied Thule’s designs bc they would rather get sued than do the r&d themselves. Thule will come out with a product and Yakima will follow suit a year later with a product that is suspiciously similar… case-in-point, look at their ski racks. Plus Thule’s customer service blows Yakima’s CS right or of the water.