After being out of the line up for a few years, Rock Shox has brought back the PIKE fork. The PIKE represents an all-new direction in thinking about what a fork should be. The clan at Rock Shox took a good hard look at what new trail riders are facing, and they created a brand-new fork from the ground up, instead of just making small changes to an already-existing fork.

The PIKE is the first production fork from Rock Shox that utilizes the new Charger damper cartridge. If you have happened to be around the World Cup circuit, or saw recent photos of the top Rock Shox-sponsored riders, you may have noticed the Charger name appear on the BoXXer WC. That’s a big hint: you just might be seeing the Charger on other high-end long-travel forks from Rock Shox very soon. 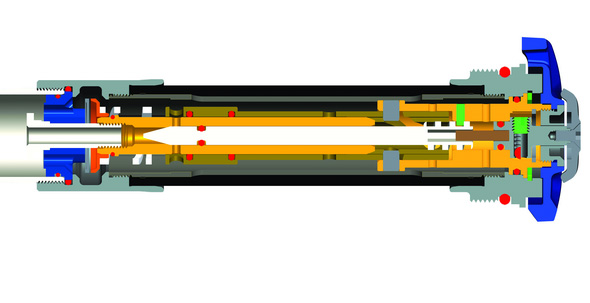 The Charger damper from Rockshox is a bladder-charged damper. The bladder is used to prevent the oil from mixing with air. The bladder is also used to allow space for expansion when the fluid is forced quickly into its chamber, much like an IFP in a rear shock. However, unlike the IFP of a rear shock, there is essentially no friction, just a bladder expanding (acting much like a spring).

Another bit of trickery in the dampening department is a rapid recovery rebound circuit that allows the fork to return more quickly after consecutive hits, giving you, the rider, more travel. This in turn ensures precise wheel tracking over rough terrain. 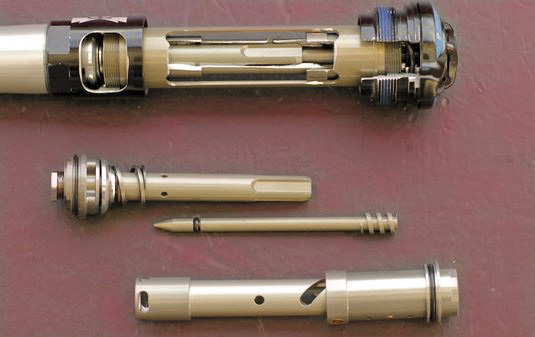 On the air side of things a simpler piston and chamber design, which easily allows the rider to change the volume and spring rate with the aid of two threaded plastic spacers, gives the fork a more progressive feel.

Other important features that help reduce stiction include the new slotted upper bushings, for both a reduction in friction and additional lubrication (due to hydrodynamic motion). A simpler single lip on the dust seal also contributes to the reduction in stiction. The single lip wiper is only possible now due to the new Charger cartridge. It separates the very light 3wt dampening oil from the 0W30 lubricating oil in the lower leg. 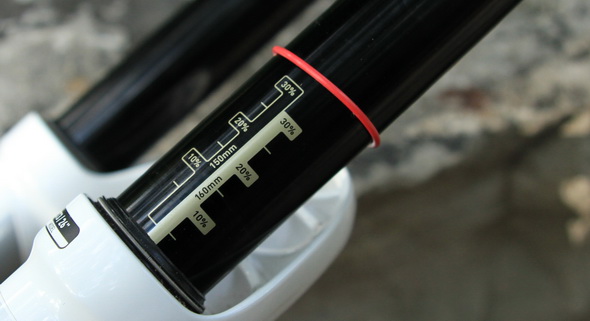 Unlike older models of Rock Shox’s forks, the new Charger damper rides high in its travel where it is the plushest. According to Rock Shox, the Pike offers a new “industry-redefining asymmetric approach to chassis design delivers an unparalleled stiffness-to-travel-to-weight ratio.” The all-new chassis uses a fork leg-specific approach to keep the weight to a minimum.

Up close you can also see that the fork legs are not the same length: 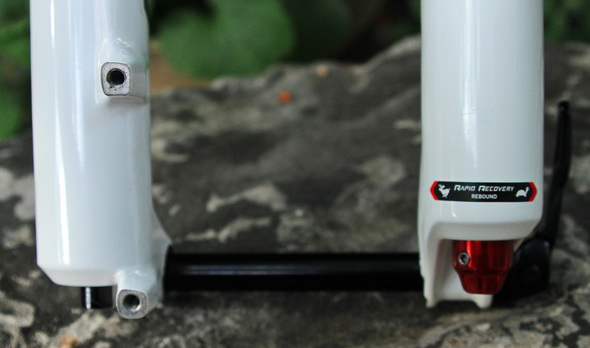 The braking side keeps as much material as needed to keep things stiff and in line, while the damper side has been trimmed down to save weight.

Significant effort went into the rest of the PIKE as well. The fork features a redesigned crown that rivals the Lyric in stiffness, and 35mm stanchions that have a hard, anodized, black finish. 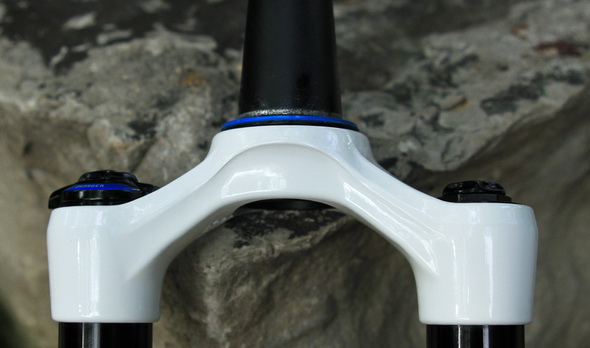 The PIKE only comes with a tapered head tube this time around, with no options for 1 1/8″ straight head tubed bikes. Air guides make are printed right on the stanchions, helping you get the right amount of sag when you air up the PIKE.

A new-and-improved Maxle Lite thru-axle rounds things out at the bottom, with an improved locking mechanism that places the axle in tension, rather than a split head that applies friction. At just a hair over 4lbs (4.05lbs / 1837grams), the PIKE is .39lbs lighter than its Fox rival at 4.24lbs. 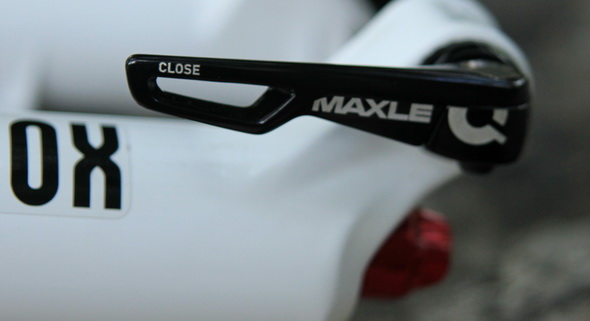 The PIKE comes in all wheel sizes, with 26in, 27.5in and 29in options, and 160mm and 150mm travel models, plus a 140mm version for the 29in platform. The RCT3 damper is available in either Dual Position Air or a Solo Air version. I am reviewing the 26in, 160mm-travel, Solo Air version.

Installing a PIKE is just like any other fork on the market today. You will need a few choice tools like the SG-6 saw guide (or a pipe cutter with fresh blade), a fine-tooth hack saw, measuring tool (ruler), a CRS-15 (or similar) crown race setting tool, and a TNS-1 (or similar) star nut setting tool. 4, 5, and 6mm Hex keys are also required for bar and stem removal.

Then, tap in the new star nut. A tool like the TNS-1 installs the star nut perfectly square every time.

The last step is to add a very small amount of lube around the very base of the steering tube, and slide the lower race in place. Then, using the crown race installation tube, tap the race all the way down, ensuring there is no gap. From here, it is easy peasy lemon squeezy to re-install the fork and stem.

You may have to fiddle around with the quick release when setting it up (following the literature that Rock Shox provides) so that when locked, the lever is in the 12 o’clock position.

Right out of the box, I had to do almost no tuning, other than setting the air pressure to my weight. Conveniently enough, the recommended air pressure chart on the fork leg is bang-on. Other than that, I kept the dials as they came for the first little while as I got a feel for the fork. 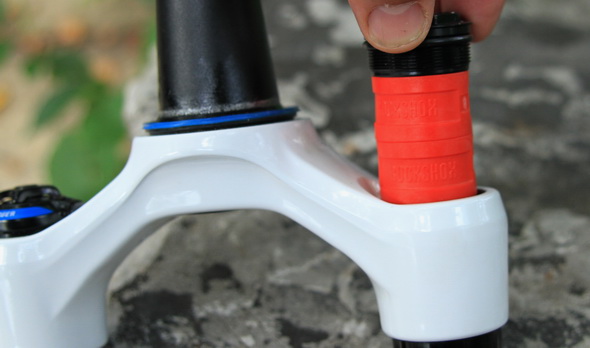 Right away I could tell that compared to previous models of Rock Shox forks, the change in the dampening circuits between the three different settings on the compression dial is very noticeable. 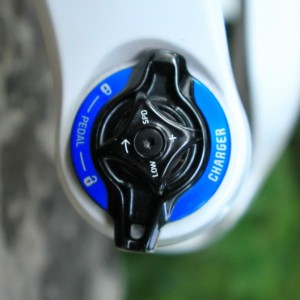 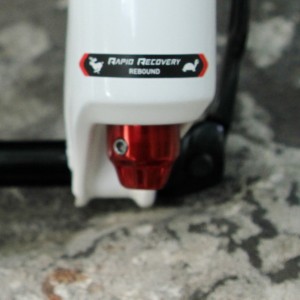 I tended to keep the fork in the middle setting (pedal) nearly all the time. Rebound and low speed compression are the other two adjustments, but honestly I thought they were fine right where they were. But as it is, the three-position compression knob runs in open, pedal, and lock position. I found very little use for the lock position to be honest, since I’m old and really don’t charge up hills. But I did find myself switching between pedal and open often enough. 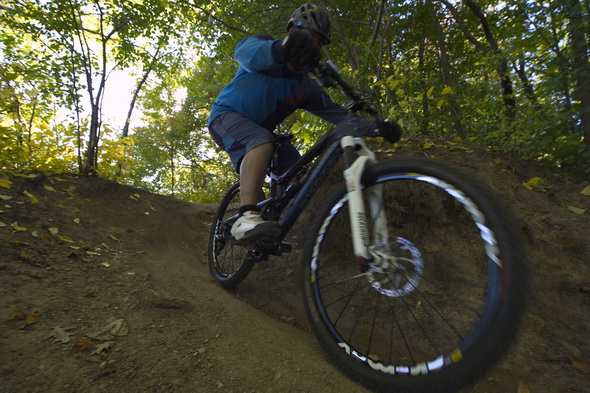 As mentioned in the tuning section, the fork worked well right out of the box. I was really impressed with the performance of the PIKE. Unlike some other older fork models from Rock Shox (and others), the fork worked very well both in low speed situations, weaving along rocky, rooted sections of trails, and higher-speed shuttle-assisted runs alike.

I found the PIKE tracked the ground like a blood hound. The stiff chassis on the PIKE did a great job at keeping the wheel upright with very little deflection (other than the wheels’ own natural tendency to flex). At no time did the front wheel creek, groan, or deflect the disk when traveling through the rough stuff.

The Rock Shox PIKE really does an amazing job at taming the toughest trails. This fork should definitely be on the wish list of any serious trail, all mountain, or enduro rider.

A big thanks to the folks at SRAM for sending down the PIKE for a review.