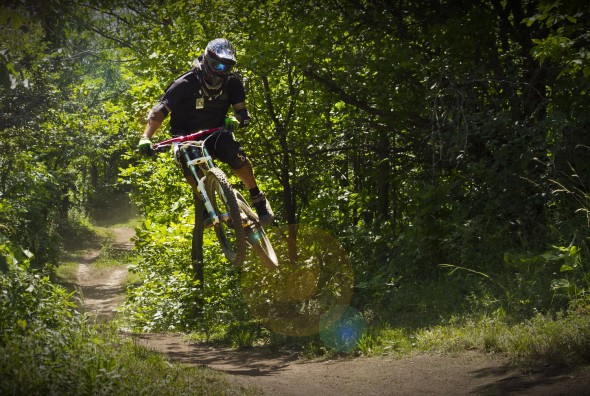 After a whole season of riding the 2012 RockShox BoXXer WC fork, I am ready to give you the skinny on this improved unit. Those of you who are regular readers might remember that I got a chance to review the 2011 version of this same fork last year, and this time around I am stoked to share all of RockShox’s improvements with you. 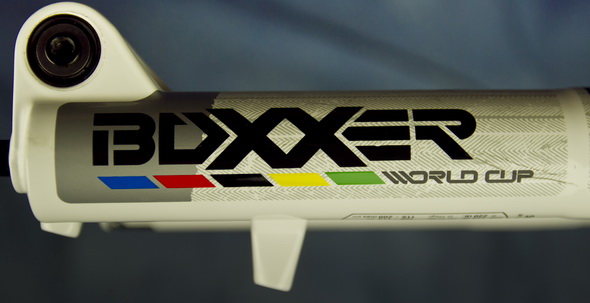 This year’s BoXXer validates RockShox’s reputation for excellence… and light weight. My unit weighed in at 5.84 lbs, which is a little more than one ounce less than the 2011 version.

Outwardly you can’t really tell the difference between the 2011 and 2012 models as the graphics stay the same, but internally I think it’s a different story. The new 2012 model feels a bit smoother than the previous version, with more small bump sensitivity. 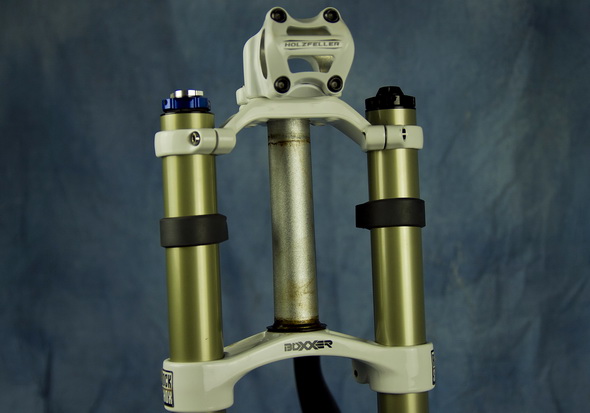 The upper crowns are forged 6061 T6 aluminum for high strength, along with an aluminum steering tube.

Stanchions are 7000 series aluminum with a low-friction, hard-anodized finish with printed air guides right on the fork for easy suspension setup. Lowers are still manufactured from magnesium and utilize a Maxle Lite DH 20mm thru-axle. As far as adjustments, you have plenty of choices. For starters, the fork features an easy-to-use Solo air spring. 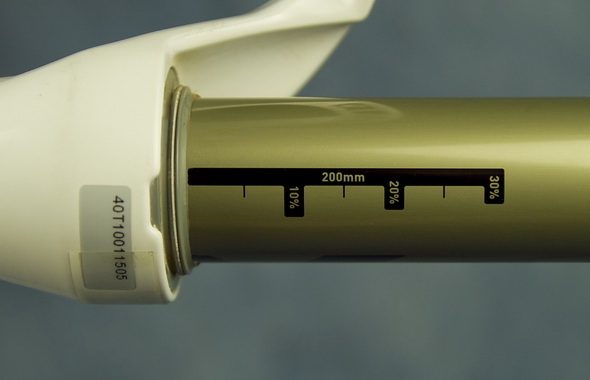 The guide printed on the fork is a good starting point, but as all riders and riding styles vary, be prepared to adjust the pressure 5 psi depending on your terrain. Also, on the left fork leg you have a bottom-out adjustment which feels smoother than last year’s model. 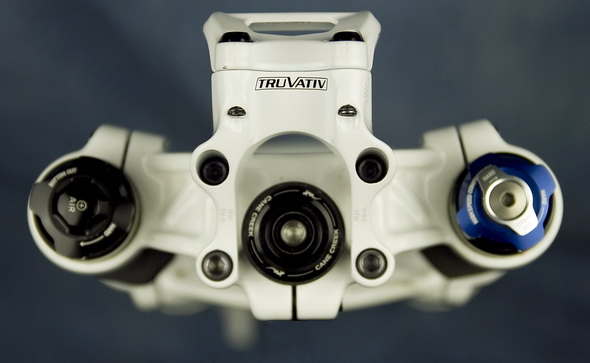 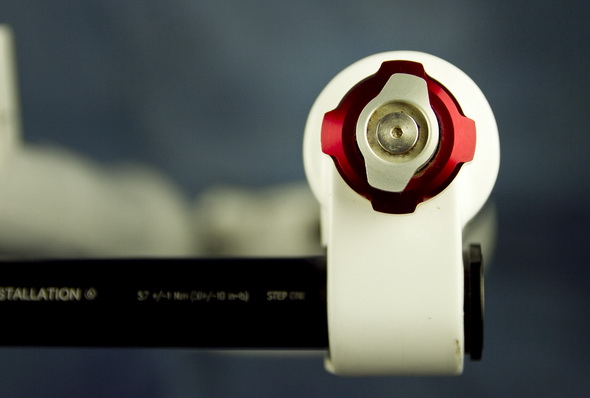 On the right side of the fork you have both high and low-speed compression settings, as well as beginning and end stroke rebound adjustments. With three color choices (red, white, and black), along with the even lighter Keronite version, you have plenty of options to match your DH rig.

Having done more than a few dual crown installs, it is always a matter of measuring twice and cutting once. For more information, please see our dual crown fork installation guide. 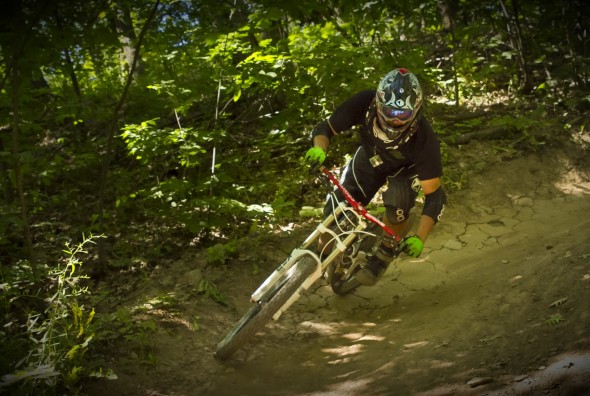 Since I installed this fork on my Santa Cruz V10C this year and not a Banshee Legend II, the setup was very different, so I couldn’t just take my settings from the 2011 BoXXer. The sag setting was first: I added air pressure until I achieved 25% sag with a pressure of 80 psi. To set sag properly, put on all the gear you normally wear when riding. In my case that was my full face helmet, Leatt brace, and elbow and knee guards.

Once sag was set, I just placed all the settings in the middle and went out to test. What I’m looking for is excessive suspension movement, and excessive kicking back or stinging in the palms of my hand. Sticking to one slope for a while, I concentrated on only one aspect of the four possible conditions: high speed compression. After eating dirt a few times, I finally came up with a dial setting of 11 clicks on the high-speed compression. The V10C’s active rear end demanded more on the compression side up front for balance. On the low speed compression dial I actually toned it down to 7 clicks. The bike stayed up well in G-out turns and really didn’t need that much.

Once I had tackled the compression side of things I hit up the beginning stroke rebound. At the 10 click position it was pretty close but did lag a bit on the rootier sections. Dialing back two clicks to 8 made me happier, providing a good combination of traction and control over rooted sections. The ending stroke rebound I played with on a few other runs where I could get more air time. At the 10 click position I forced myself to go harder and softer to see if it got better. To my surprise the middle count (10 clicks) was perfect. On the last setting (air volume) I found that most of the time I was happy at 1.5 turns. 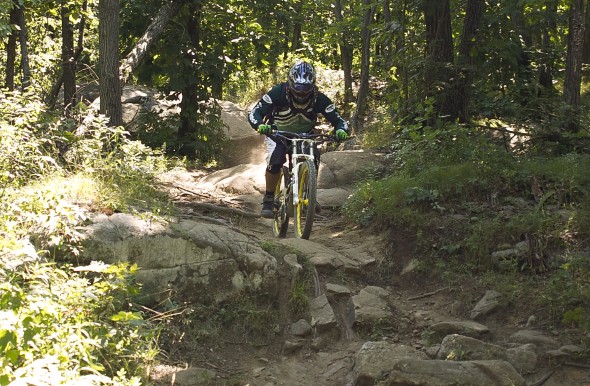 The BoXXer WC has come a long way from its predecessors. Once I gave the fork enough time to break in and tune in, I really started to appreciate it. I wasn’t too keen on the naming of the rebound settings as it kinda confused me a bit but, once you understand that really the guys at Rockshox are saying “low speed rebound” and “high speed rebound,” then you get a clearer picture (at least I did).

I really appreciated the very solid, unmistakable click you feel and hear when making adjustments–it makes for easy repeating of settings without guessing.

Other than that, I am pretty impressed with the 2012 BoXXer! I personally enjoyed the fact that the fork comes in at only 5.84 lbs: with a weight like that, controlling the bike and the front end is a whole lot easier. Being that light weight, you might think that it would be too light, and possibly even flexy. Well I didn’t find that to be the case at all! Even with my weight smashing the bike through the gnar at Mountain Creek, the fork never felt the least bit flexy.

Once tuned, I was impressed at the fork’s bottomless feel. You can smash through rock gardens, and then drop a half dozen feet without a hint of the fork fading in any way. And then the landing is plush! Gotta love air forks! Speaking of air, even after two months of solid DH riding, the air pressure has not dropped at all. 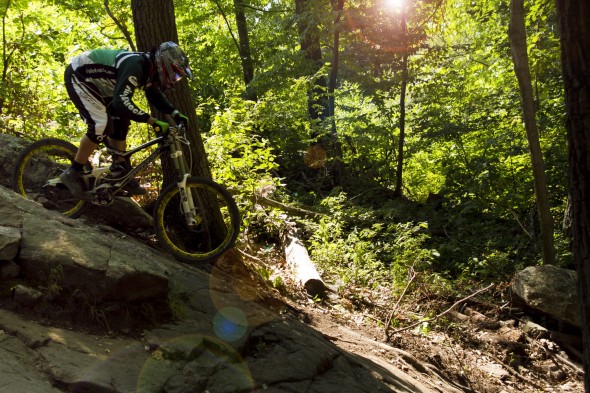 Now this uber-light weight and excellent performance does not come cheap. MSRP on the BoXXer World Cup comes in at $1700 USD. Yup, that’s an arm and a kidney, but getting one of the lightest and best-performing forks on the planet doesn’t come cheap. That being said, the BoXXer R2C2 and BoXXer RC come in at $1265 and $885 MSRP (USD) respectively. The R2C2 is really close in performance to the WC, just without the air spring (which obviously makes the R2C2 heaver). If you’re planning on just hucking around and tossing the bike in the back of the truck, you may want to consider the Domain DC R.

This is a top-contender fork that performs well over the long term. It is both durable and adjustable. Take your time setting it up and you can really reap the benefits. Due to the high adjustability, light weight, and high cost, this fork is definitely intended for the racer crowd and isn’t for everyone. But it is a fork that really can keep you pointed in the right direction.

A big thanks to the folks at RockShox for sending the BoXXer WC down for review.