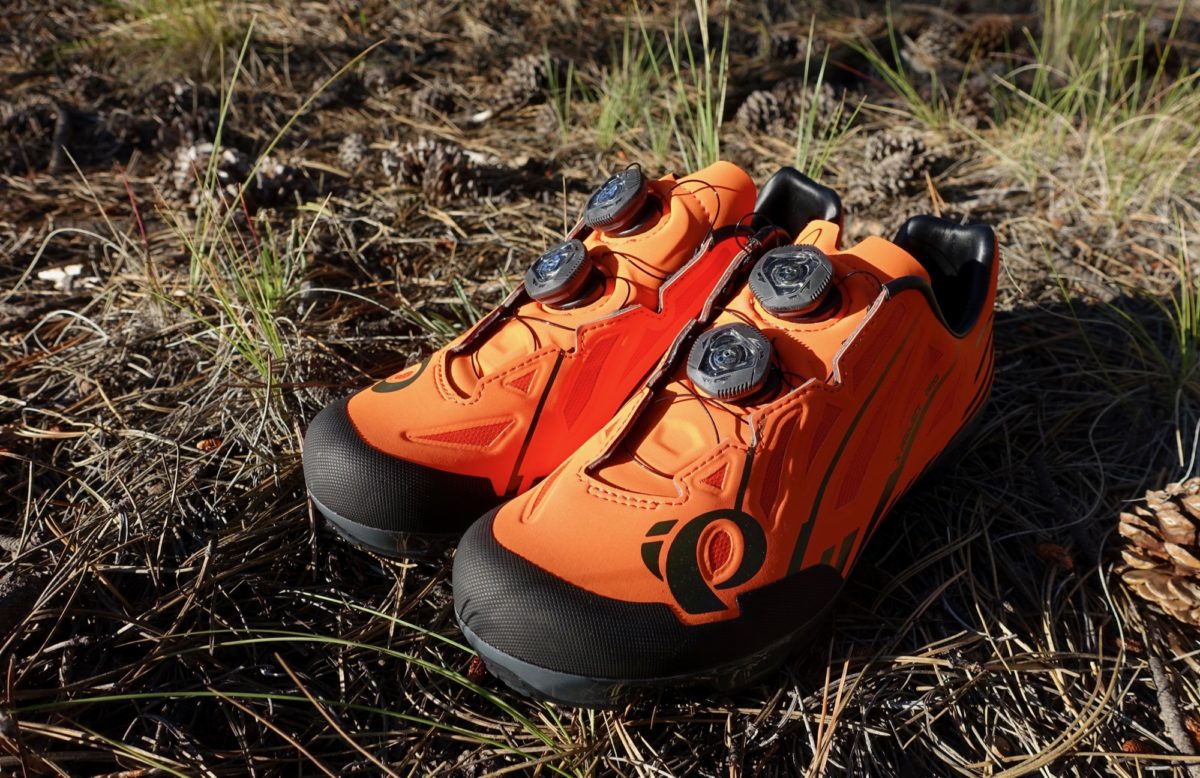 Many of the shoes I’ve destroyed have been designed for rugged enduro riding or straight-up freeride, and still, they didn’t pass the test of rugged hike-a-bikes in the Colorado Rockies. So, in my never-ending quest for the perfect shoe, I put in a call to Pearl Izumi, one of the most reputable shoe brands in the industry.

At that time (almost exactly a year ago), they had just announced the latest version of their X-Project shoes, the X-Project P.R.O. shoe. The official marketing splash for this shoe claims in big, bold wording, front-and-center: “There is nothing wrong with walking your bike. Unless you can’t walk your bike.” 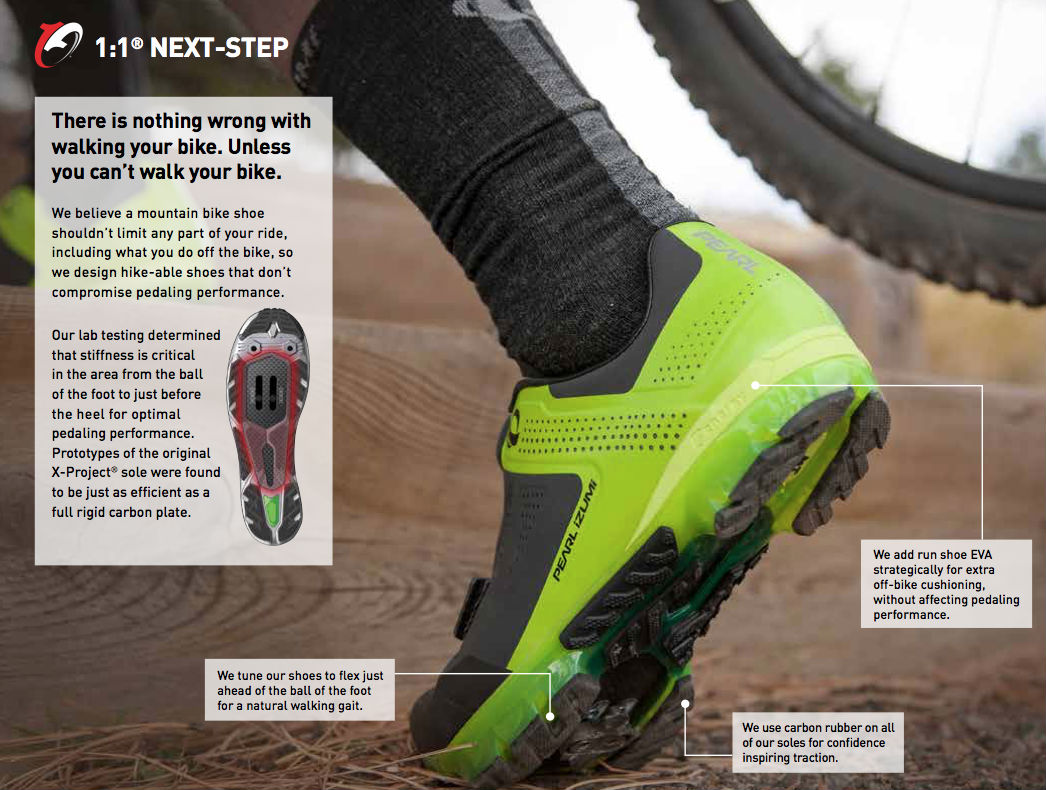 The rest of the text sounds enticing as well:

“We believe a mountain bike shoe shouldn’t limit any part of your ride, including what you do off the bike, so we design hike-able shoes that don’t compromise pedaling performance.”

“We tune our shoes to flex just ahead of the ball of the foot for a natural walking gait.”

“We use carbon rubber on all of our soles for confidence-inspiring traction.”

“[The] X-PROJECT® [is] perfect for all mountain bikers and cyclocross riders.” (Emphasis added.)

Having had numerous “enduro” shoes fail on me, testing a shoe on the trail end of the spectrum with such bold claims seemed like the perfect solution. Enter the P.R.O. model of Pearl Izumi’s X-Project line. 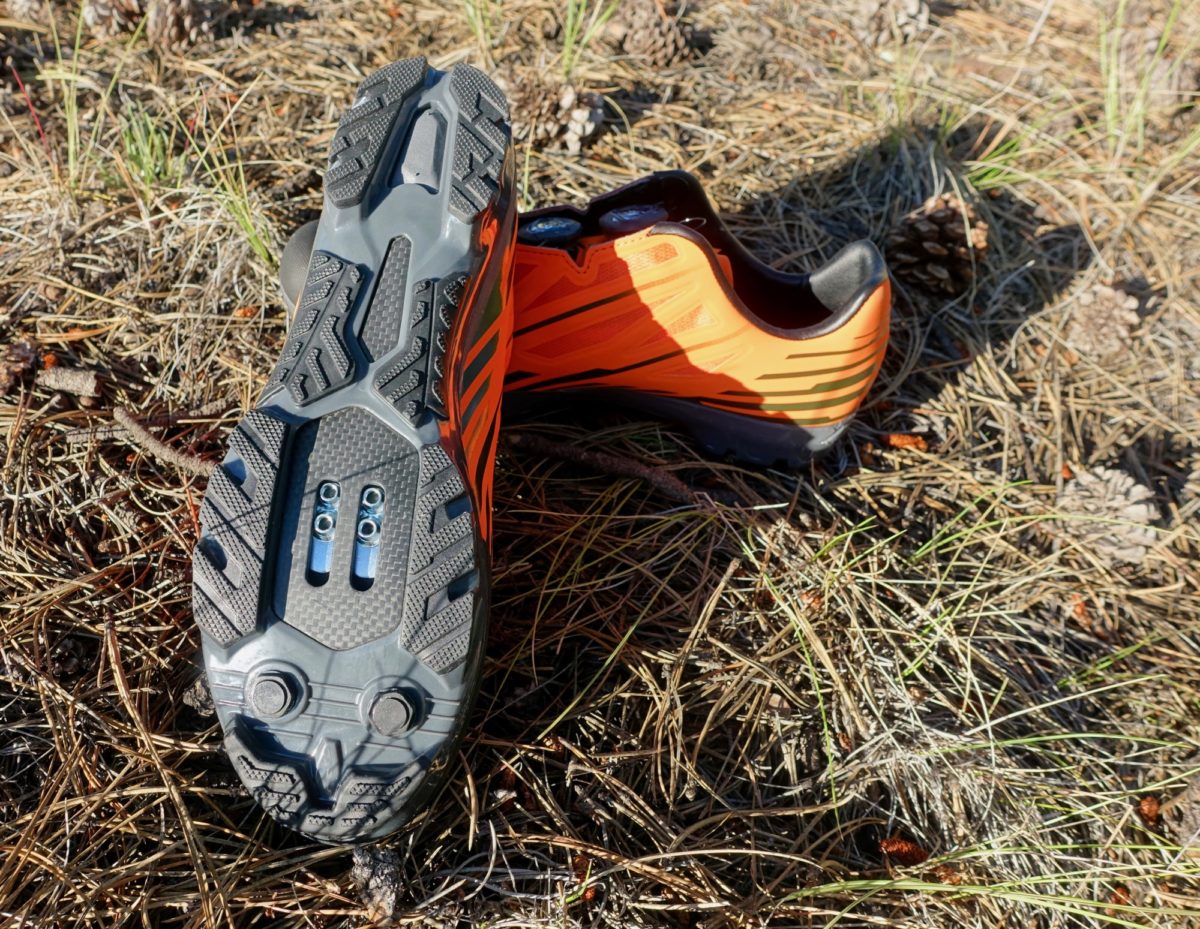 Instead of simply slapping on a full-length carbon shank like most other lightweight high-performance shoes, Pearl Izumi did some research and asked, “How much of the sole needs to be rigid to keep the pedaling efficiency at 100%?”

“We found that you need to go just in front of the cleat, basically to where the toes are going to bend to just below the heel. If you make that rigid, you get 100% efficiency plus the walkability,” said Andrew Hammond, Global Brand Manager for Pearl Izumi. 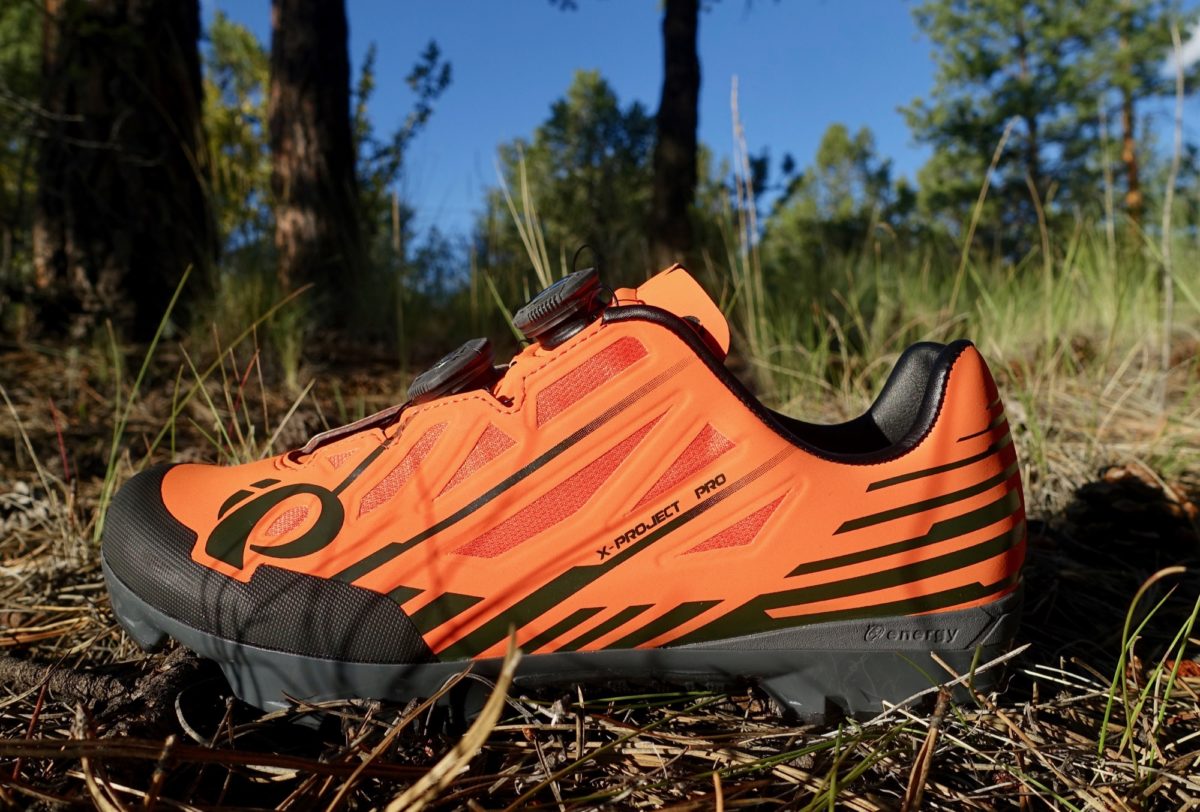 “Nobody makes a sole that’s as expensive as this shoe to make,” said Hammond. “[The construction consists of] a co-molded rubber over hollow TPU lugs. The idea is to give real rubber traction to a lightweight sole. The 3/4-length plate is then integrated into the sole, so there’s built-in toe flex and heel flex so it walks well.”

The uppers are also lightweight and breathable, with a pair of Boa dials on the P.R.O. model allowing the rider to fine tune the closure.

This labor-intensive R&D process truly produced a lightweight shoe: just 370g for this top-end model. The engineering and technology come at a price, though: $350 MSRP.

With some of the mountain bike shoes I’ve destroyed in recent years, I’ve at least gotten a couple weeks of use before signs of degradation presented themselves. With the X-Project P.R.O. shoes, the rubber on the outsole began degrading and peeling off on my very first ride. Granted, my first ride did include a good bit of hike-a-bike on a scree-filled motorcycle trail, but as a relatively quick hour-and-a-half after work jaunt, ride #1 was nowhere near my standard all-day weekend epic.

Despite just 99 minutes (and 13 seconds) of moving time, the rubber lugs that Pearl Izumi was hanging their claims of epic traction on began to peel away. The images below were taken after that very first ride: 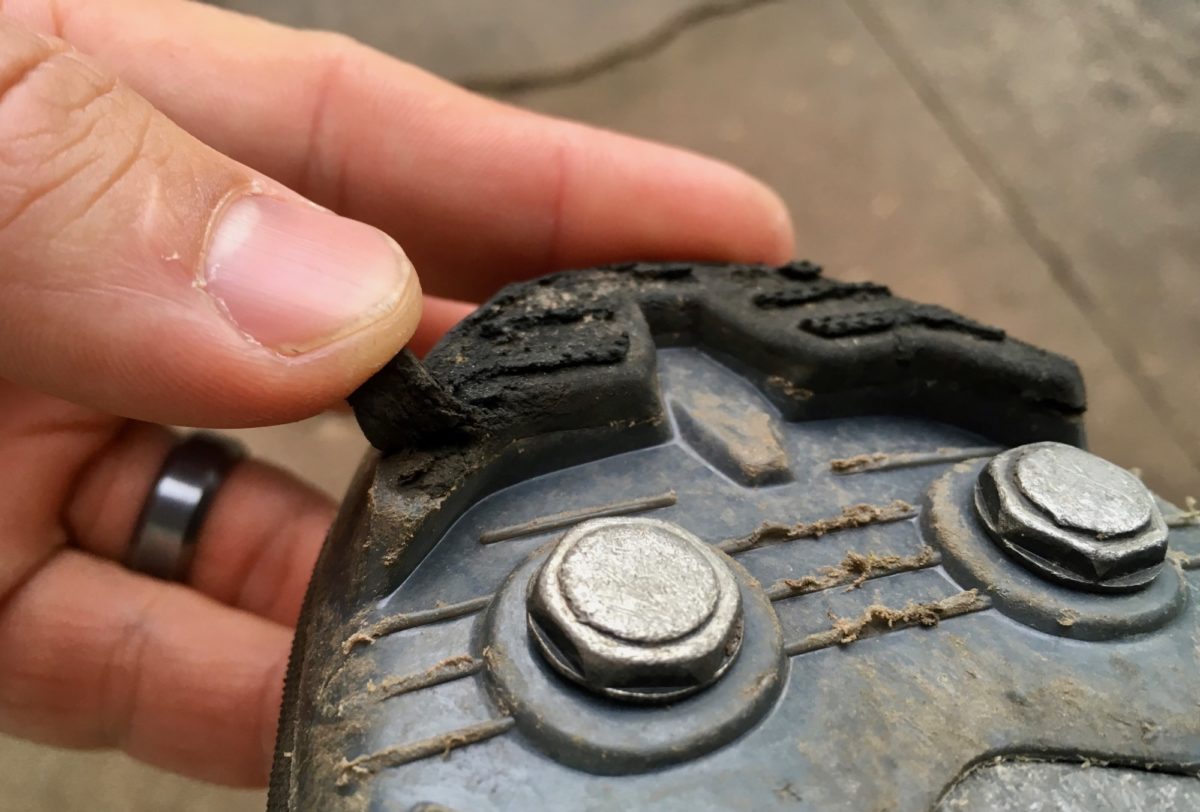 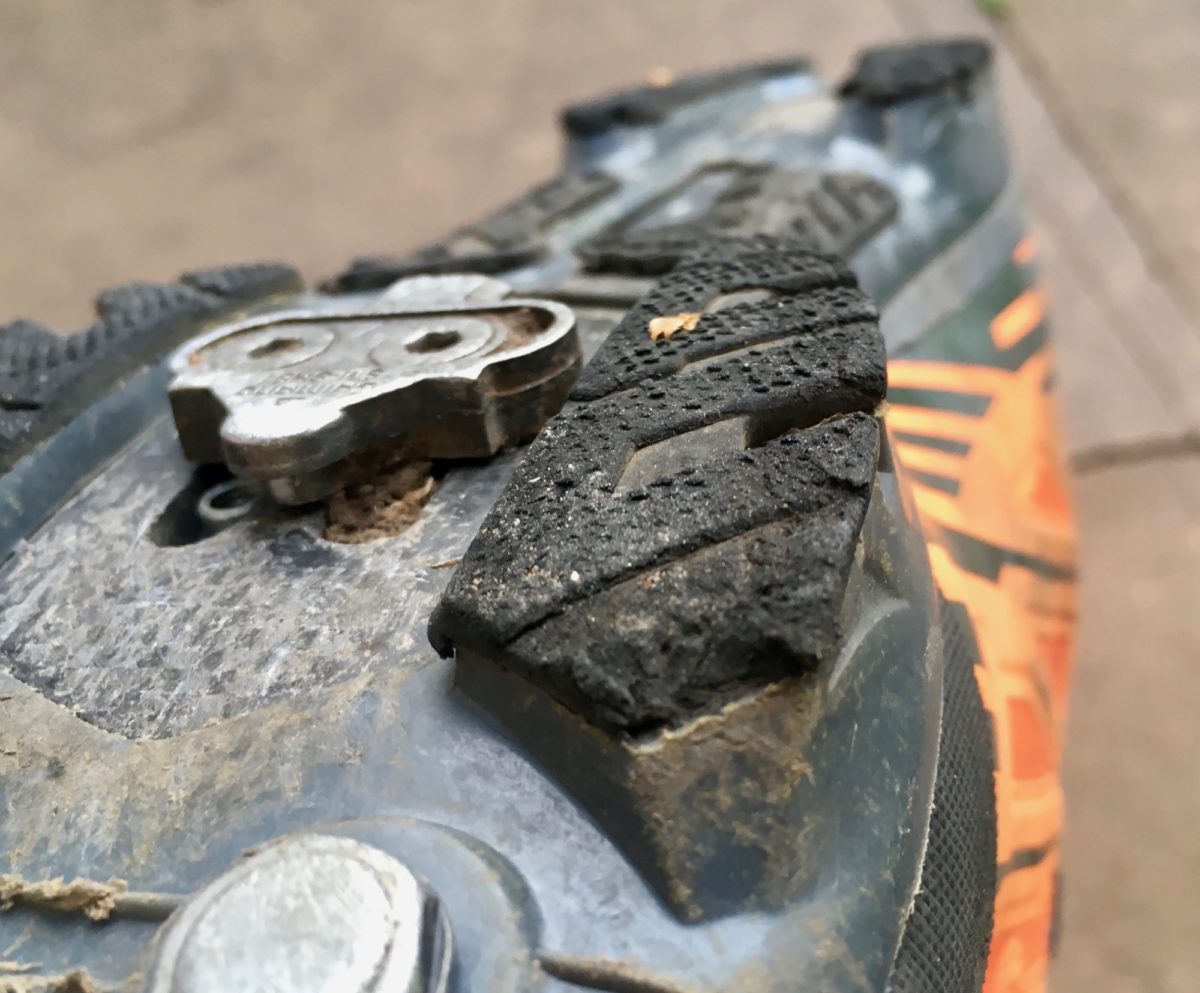 I continued using these shoes on my everyday rides to see how the wear would progress. I pedaled long distances, hiked up mountain sides, and generally used them for everything I do with a mountain bike. Over the course of a few weeks, the rubber only continued to degrade, but I found the TPU lugs beneath the rubber and the carbon shank core to hold up well through the abuse.

I also found Pearl Izumi’s claims of flexibility in the shoe to be well-founded. Despite being an extremely efficient shoe while on the pedals, with the carbon shank providing maximum power transfer, the toe box flexes substantially, just ahead of the cleat, which allowed me to really dig into steep scree fields and loose dirt as I hiked up hills. The flex in the heel box is more difficult to feel since that portion of your foot doesn’t flex in the same way, but the shoes tracked well with my foot with both of the Boa dials adequately tightened down.

I contacted Pearl Izumi (PI) about my troubles, sending them photos and shipping back the first pair of shoes. PI was shocked at the damage to the shoes, saying “we’ve had these in the field tested for hundreds of hours and haven’t had issues like this.” So, they sent me a second pair for another round of testing.

For a second time, I pummeled these shoes like I would any other. They traveled with me on gravel road grinds, big mountain shuttle rides, the one-off road bike ride, and of course, while hiking up steep mountainsides high in the Colorado Rockies. Unfortunately, the rubber lugs exhibited the exact same wear pattern as the first set of shoes.

First, the corners of the toe lugs would peel up, as shown in the photo above. Eventually, they would tear off completely, and the front lugs would continue to wear inwards as the rubber wore away. The lugs near the cleat and at the heel would similarly wear and flake away from the edge of the TPU.

Never did an entire rubber piece delaminate or completely fail, coming off the shoe entirely. Rather, they were worn away in the process of wearing and using the shoes.

Here are some images showing the wear and tear on the second pair of P.R.O. shoes after roughly a month of use: 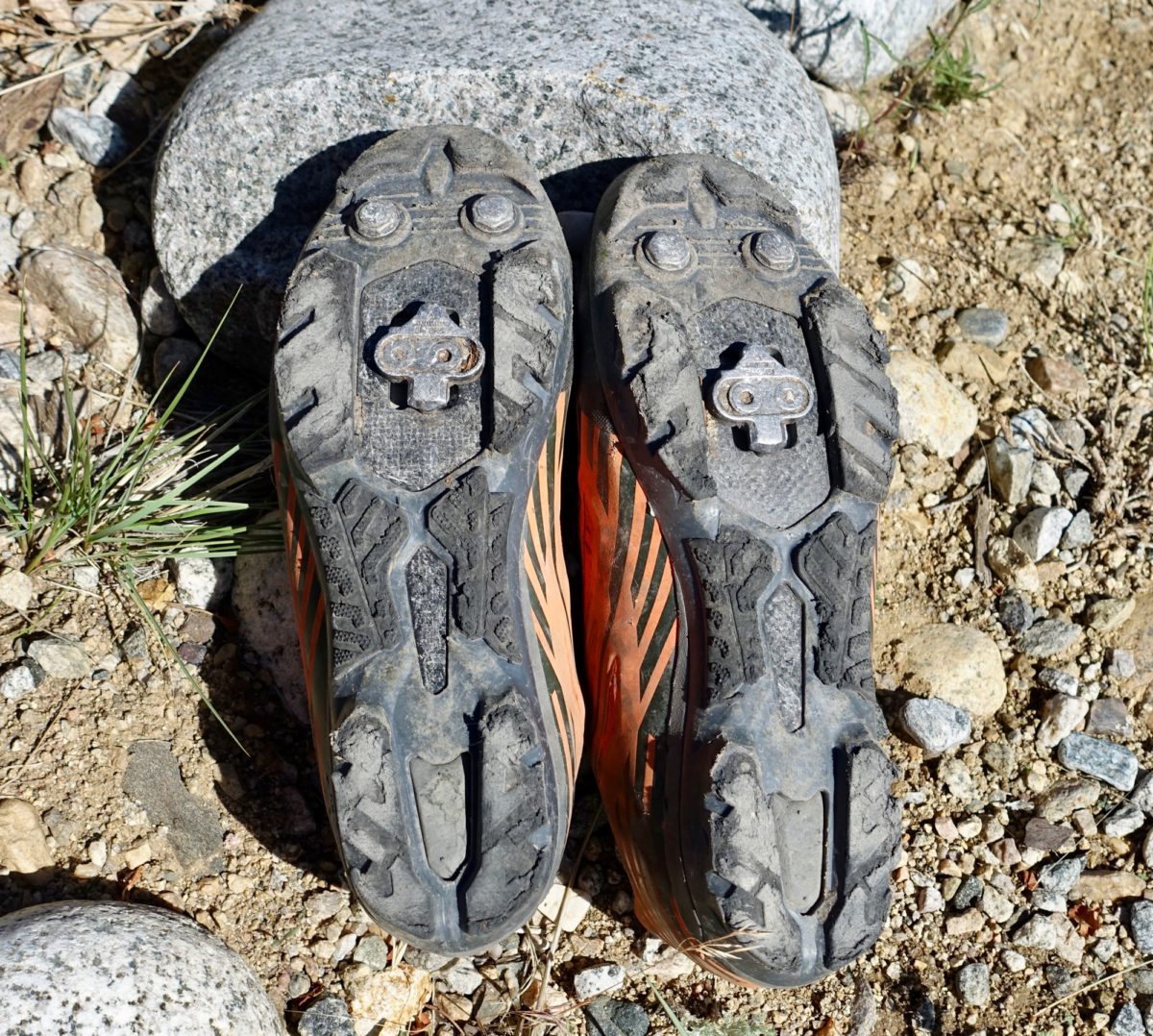 At the end of my test, I found myself let down by the marketing hype surrounding Pearl Izumi’s X-Project shoes. While sure, the P.R.O. transfers power superbly when on the pedals and they flex while walking, these shoes are not meant for sustained walking, in my opinion. If the rubber was a bit more durable I’d climb mountains in these all day, but having the rubber lugs begin to peel away on the first ride is unacceptable.

Based on my test, I would consider the X-Project a purely XC shoe. If you need to run for a bit in a race when traffic gets backed up, the flex in the sole and the rubber lugs will help, but only for emergency situations.

I met with Pearl Izumi at Interbike this year–as I do most years–and we got to talking about the X-Project P.R.O. shoes and the damage that I’ve inflicted on them. Above and beyond my propensity for destroying shoes, the conversation moved to the ideal use case for the X-Project shoe.

“The X-Project is an all-around mountain biking shoe,” said Hammond. “It’s going to be for somebody who does want to get off the bike and be comfortable, whether they’re shooting photos or doing a hike-a-bike — they don’t want to have any compromises there. Walking across a wet bridge — something like that, where they really value the rubber traction, but they also want the lightweight, XC feel shoe. They want to have a shoe that pedals well enough to race in, or do whatever they want, but it really is an all-around piece.”

Based on my test, I would disagree with the hike-ability of this shoe due to the quick disintegration of the rubber. However, in a situation like crossing a wet bridge, I could see the grippy rubber being invaluable and the chances of destroying the sole to be minimal.

Andrew Hammond brought up Pearl Izumi’s lifetime warranty against wear and tear, and said that if any normal customer had returned a pair of shoes with this much wear and tear, that Pearl would “recommend a different shoe for you and refund your money.” Such an excellent return policy should do wonders for the consumer’s peace of mind.

For my purposes, PI recommends their X-Alp Elevate enduro shoe, which is a new X-Alp model for 2018. The X-Alp features a much more rugged and rubberized Vibram outsole that promises radical purchase on extended hike-a-bikes. I plan to get a pair of these shoes in for review for the 2018 high country season.

While hopefully the X-Alp Elevate will provide the hikeability that I need, what is a big mountain cross country or endurance racer to do? With races like the Vapor Trail 125, maximum pedaling efficiency is paramount due to the extended gravel road climbs and hours upon hours of pedaling. And yet there are at least two rugged hike-a-bikes along the route, one of which is the ascent up Canyon Creek pictured above. For an event like this one, lugging around the weight of the X-Alp Elevate seems excessive, and the X-Project P.R.O. seems like the perfect solution on the surface. But what if the racer isn’t flush enough to spend $350 on shoes for every race?

Unfortunately the X-Project doesn’t make good on its bold claims.

Thanks to Pearl Izumi for providing the X-Project P.R.O. shoes for review.

Gear
Never Underestimate the Power of a Good Zip-tie
Gear
The Maxxis Minion DHF Tire is Still the One to...
Gear
Mountain Bike Tire Repair Tips: From Emergency to Semi-Permanent
Gear
These MTB Deals are Fire, including 40% off Patagonia Dirt...
Subscribe
Login
Please login to comment
3 Comments
Most Voted
Newest Oldest
Inline Feedbacks
View all comments

Thanks for the great and honest review. I’ve been having the same problems with shoes as my rides include a lot of hiking over rough terrain. Shoes that are marketed as “hike able” such as these are holding onto the bike shoe sole too much, IMO. We don’t need spikes, we need a sole that is more like a hiking shoe that’ll actually last.

I’m interested in your future review of the X-Alp. I just completely wore out a different version of the X-Alp and, although replaced under warranty, the Pearl Izumi store manager gave me a fair bit of grief for being so hard on my shoes. I told him it’s called “mountain biking” for a reason. Pfft.

I would be very mad. I am in the market for some new shoes but I can find any that are comfortable that look like they will last.

Wow, not the review I was expecting. $350 a pair and can’t handle a little significant terrain. Crazy. I did look online and saw that the X-Alp is only 10 grams heavier than the X-Project P.R.O.. I’m still riding flats, so I guess I’ll just stay with some lightweight hiking shoes. I don’t mind losing a little efficiency in pedaling.