After my disappointing experience with the Serfas Trax, I renewed my search for a versatile, performance-oriented, yet reasonably-priced mountain bike shoe. After many false starts, I simply gave up and decided to split my time between limping along an old and way-beyond-their-useful-life shoes and–egad!–riding flats. 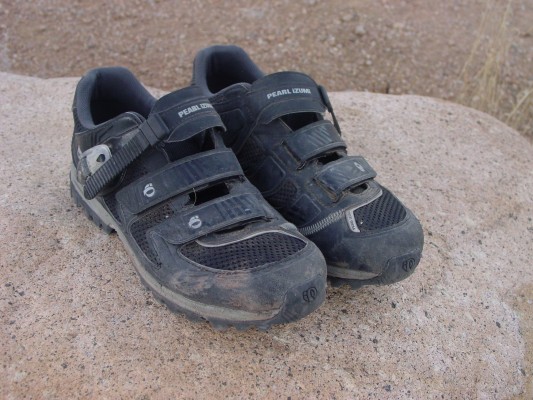 By pure happenstance, I was in my local chain store, one which I never shop, and decided to peruse shoes while I was there. After spotting a pair of Pearl Izumi X-Alp Enduros, I decided to try them on, not expecting any kind of fit I could tolerate. My previous favorite mountain biking shoe was the Pearl Izumi Vagabond, which they had discontinued–much to my chagrin. Adding insult to injury was that I was informed that PI had changed their last to match a narrower foot, which simply wasn’t going to work for my Sasquatch-ian feet. So, despite the sales tech’s assurance that I needed to try on the X-Alp Enduro, I had zero hope for success.

Well, long story short, they fit well enough, and I decided to give them a go. The shoe was still a bit narrow for my taste, but within an acceptable comfort range.  The retail price of $120 was still a bit more than I wanted to spend, but still less than half the likes of a similar SIDI, the only other shoe I had owned which fit my foot well and performed at a high level.

The X-Alp Enduro III is billed as a comfortable performance mountain bike shoe.  In construction, it employs a combination of synthetic materials which include both a simulated leather type and breathable mesh.  It also sports a lugged rubber outsole as well as a nylon plate underfoot for stiffness, although it retains a flexible forefoot for walking.  The man-made sole is not far from what you’d expect in a walking shoe, but it is more suited to those rocky hike-a-bikes than the pavement.  The closure system is the familiar combination of two velcro straps below with a ratcheting strap up top.  Overall, the weight of the shoe is middle of the road: not race light, but not entry-level or rough-duty heavy. 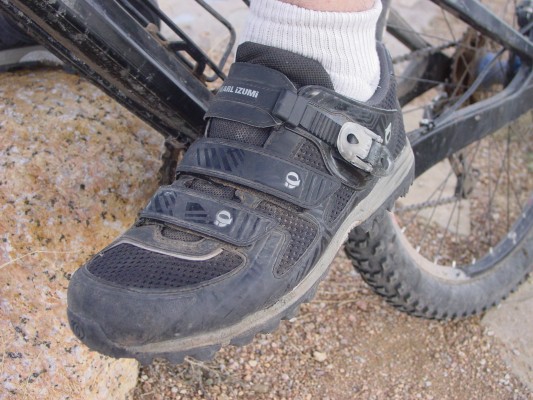 How Does It Perform?

In my Serfas Trax review, I shared my personal requirements for an everyday cycling shoe:

I have described the fit above.  This shoe is best for an average to slightly above average volume foot.  However, the closure system allows for a wide range of adjustment, and I can comfortably spend all day in these shoes, even with my wider/very high instep foot.

Like the weight, power transfer from these shoes is definitely in the middle of the spectrum.  If you’re looking to podium in Cat I of an XC race, this shoe probably isn’t going to be your first choice.  Anything short of that, however, and these shoes will not disappoint.

As far as comfort, that factor is achieved at such a high level that any concerns about weight and power transfer quickly melt away.  These shoes will be your best friend for any ride where you’re not solely focused on competition, and I would even say the same for any competition you might expect to last more than an hour or two.  I can’t imagine having a better friend for my feet for all day epics or enduro races than the X-Alp Enduros.

The $120 price tag is also pretty middle of the road.  However, my experience has been that overall, the performance of these shoes is to the far right of the bell curve, making them a bargain.

In addition to all the virtues I mentioned above, there are two more I must share.  First, the amount of mesh allows for superb breathability, making these a great shoe for sweathogs like me. Second, I have now had these as long as any previous shoes, including my beloved PI Vagabonds, and they have held up better to the abuse than any. Over the long haul, they are indeed a bargain.

So, once again, I’ve found the perfect mountain bike shoe.  But, alas, not all’s well in Foot-Land.  PI has already moved off the X-Alp Enduro III and replaced it with the X-Alp Enduro IV.  While it looks similar, it doesn’t appear to have the same amount of mesh, so some of that breathability may be lost.  Why couldn’t they just leave well enough alone?  While the IIIs are largely gone from bike shops, they can still be found on the ‘net, and usually at a significant mark down given that they are the previous model.

So this shoe has seen a lot of use this past year for me. I used it on the Arizona Trail Race, Colorado Trail Race, Vapor Trail, and pretty much every single ride and race last year.

The shoe has held up amazingly well, no rips in the mesh, the sole is in perfect condition still, straps are in great shape, and I have had not issues with the top strap clip system.

I put an Insole called Superfeet in mine as my feed are pretty messed up. The only beef I have is the toe box is a bit big. Lots of moving room, and for some this is a good thing. However when I was on the Colorado Trail last summer, riding thru Sargents mesa, I ended up stubbing my toes so much, because of the toe box I ended up loosing a few toe nails and my feet were a mess.

Other then that, I love them because I put myself in a situation where I always have a HAB in front of me. Oh I forgot, They dry really fast, thats another thing I like about them. Unfortunately they have stopped production, there are plenty on on the inter-web where you can get your self a pair.

Thanks for sharing your experience. I’m one of the ones for whom that large toe box thing is a good thing as I have a wide forefoot. I feel for ya’ though–I did that losing the toenails thing a couple times with some ill-fitting ski boots.