The Marzocchi brand has a bit of a history to say the least. In the late 1990s, Marzocchi introduced the original Bomber Z1 fork, a fork that the industry didn’t want or know that they needed.

Before the first bomber, the RockShox Judy was usually the point of reference for mountain bike suspension. Their XC fork had 27mm stanchions and 50mm of travel. The downhill-oriented Judy pushed the travel to 75mm.

When the Bomber Z1 came out, it delivered four inches — about 100mm — of coil-sprung travel to a growing freeride crowd. It was more travel than anyone thought they needed at the time, but Marzocchi quickly became a favorite. The fork was reliable, tough, easy to maintain, and changed the expectations of a mountain bike fork.

Fox believed that Marzocchi could be a good addition to their brand, and in 2015 Fox acquired the mountain bike suspension side of Marzocchi. Earlier this year, the brand released a revamped Bomber Z1 fork and a new addition, the Transfer dropper post.

About the new Bomber

Let’s talk about the Fox in the room. Is the Bomber Z1 just an inexpensive version of a Fox 36? Partly yes and partly no. Let’s be clear that the Bomber Z1 today is intended for a certain crowd, just like the original Bomber. This crowd cares less about weight and fine-tuning suspension, and more about ripping up trails on a reliable and tough fork that’s easy to use.

The Bomber shares its chassis and air spring with the Fox 36, although the chassis is made from a different, heavier 6000-series aluminum than the Fox 7000-series aluminum. This helps keep the overall price down. The Bomber also uses the GRIP damper rather than the GRIP2 that’s in the current Fox 36. This means less adjustability for the Bomber, although it is still adjustable with low-speed compression, rebound, and volume tokens.

I mounted the 160mm Bomber Z1 to my Guerrilla Gravity Megatrail V1. The fork is made for aggressive trail and enduro riding and it was a perfect match for the bike. With the added weight and limited adjustability compared to my MRP Stage fork, I assumed that it’d be a downgrade, but the Bomber isn’t a downgrade and it’s not quite fair to call it a budget fork, either. 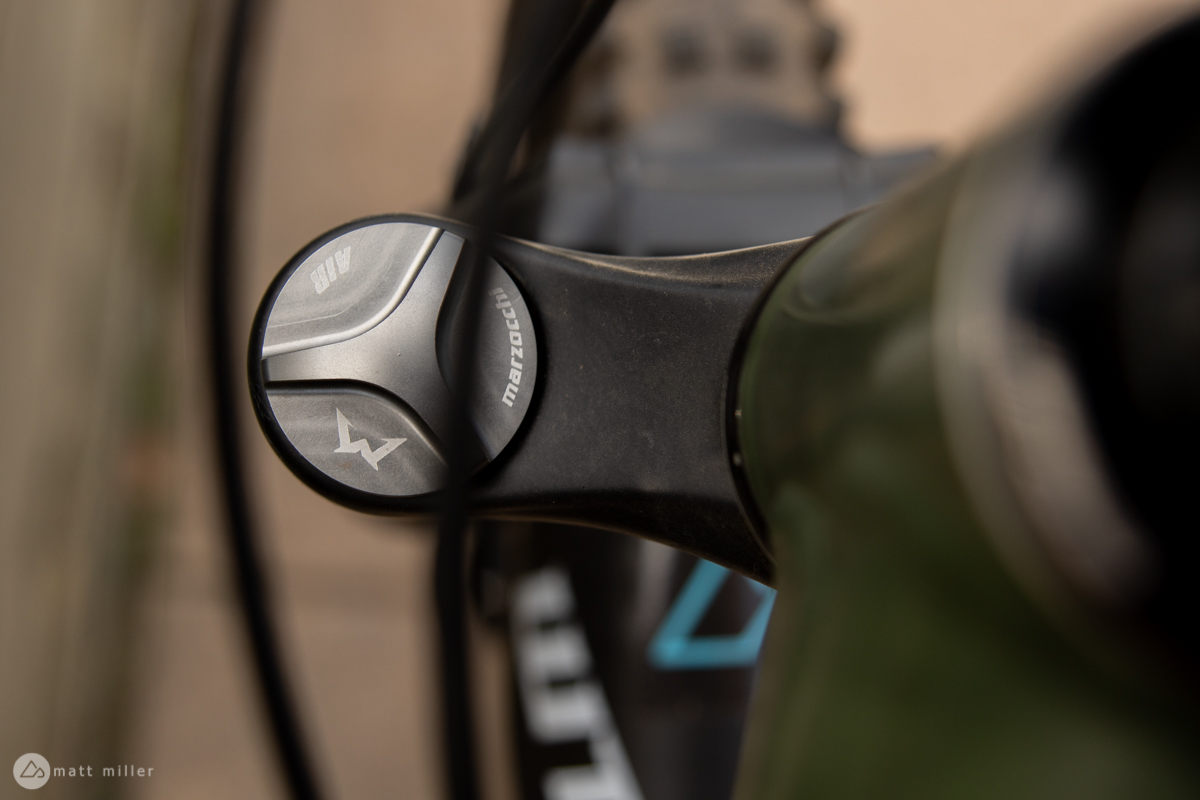 My first impressions were made by the suppleness off the top of the fork. It’s quite sensitive to small bumps, and of course not as sensitive as a Fox 36 or a Rock Shox Lyrik RC2. But for the price, it’s impressive.

I rode the fork with the compression dial roughly in the two o’clock position for descending, as pictured above. With the dial there, it felt firm and supportive, while offering the right amount of compression damping. I didn’t close the valve all the way very often for climbing, and would move the dial to about the four or five o’ clock position to still get a bit of travel out on rocky climbs.

I found the fork lost a bit of its sensitivity after a few trips from my residence in Golden up to the higher elevation bike parks in Keystone and Winter Park. Matt Pacocha from Marzocchi recommended burping air from the lowers, as changes in elevation and lots of laps can introduce air into the lower legs which affects small bump sensitivity.

After inserting a zip tie into the lower legs of the fork, an audible “psssst” belched out of the fork. I aired the fork back up to 75 PSI (with the same two volume tokens), and the small-bump sensitivity was back.

Big hits are where the Bomber wants to be, though, whether they’re off of drops, jumps, step-ups, or step-downs. On impact, the fork feels so smooth and plush through its travel, and so stiff and in control.

Some consumers will be upset about the fact that the Bomber doesn’t have detents, or notches to move the dial to a consistent spot when making adjustments. Personally, this didn’t bother me most of the time. With a paint marker or a few dabs of cut tape, it’d be easy to mark different spots across the damper, but it’s really not hard to learn the positions on the sweep damper.

I’m surprised the Bomber Z1 isn’t offered in a non-Boost axle option. I assume that the same crowd that might be interested in a fork like this is also the crowd that doesn’t care about the latest and greatest options that the mountain bike industry comes up with, like Boost spacing. My bike was non-Boost and I was able to make it work by using an MRP Boost adapter on my Chris King hub, but that’s not an option for everyone. At the very least, it’s an extra expense for those with older wheels. 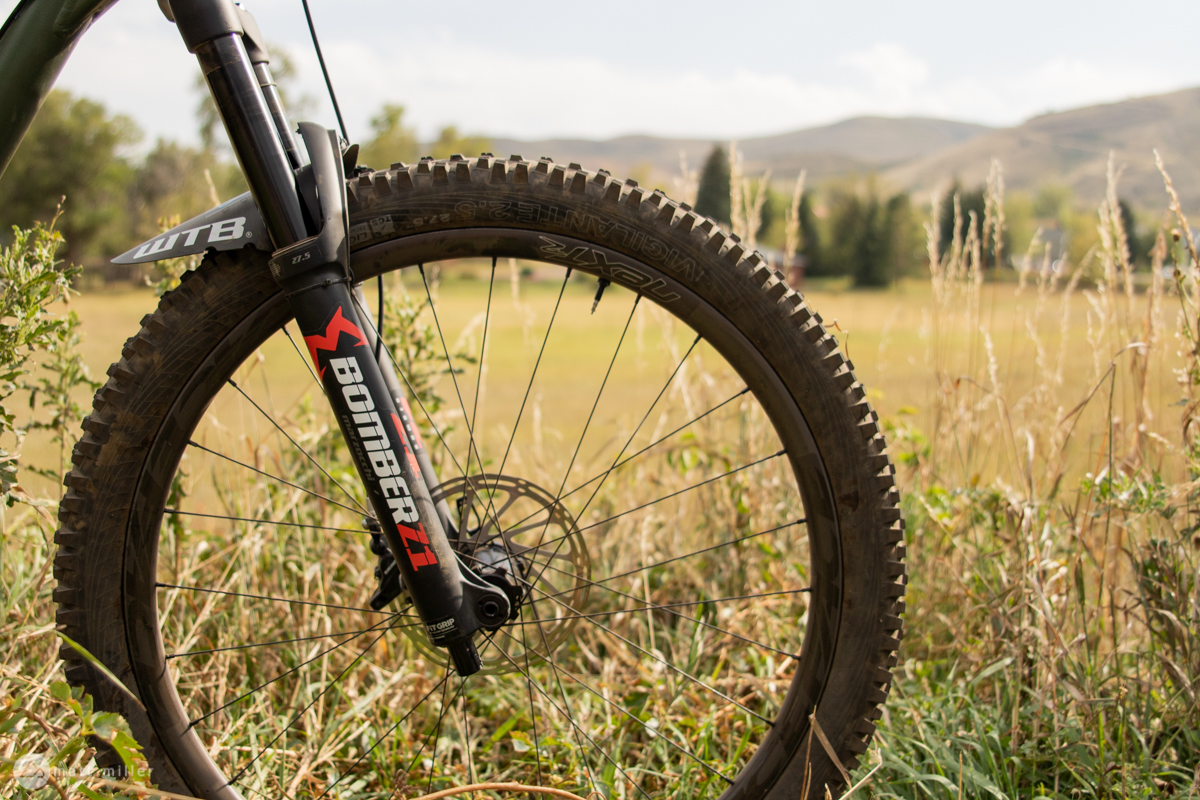 The Bomber Z1 isn’t a budget fork, but a fork made for hard riding with new technology that sells at a great price. It’s heavier than others, and less refined, but also saves buyers a few hundred bucks while delivering performance comparable of a higher-end fork.

Thanks to Marzocchi for providing the Bomber Z1 for review.

Matt, your GG frame looks amazing with the tank-green paint.

Great review! This’ll be one to consider for my next build.