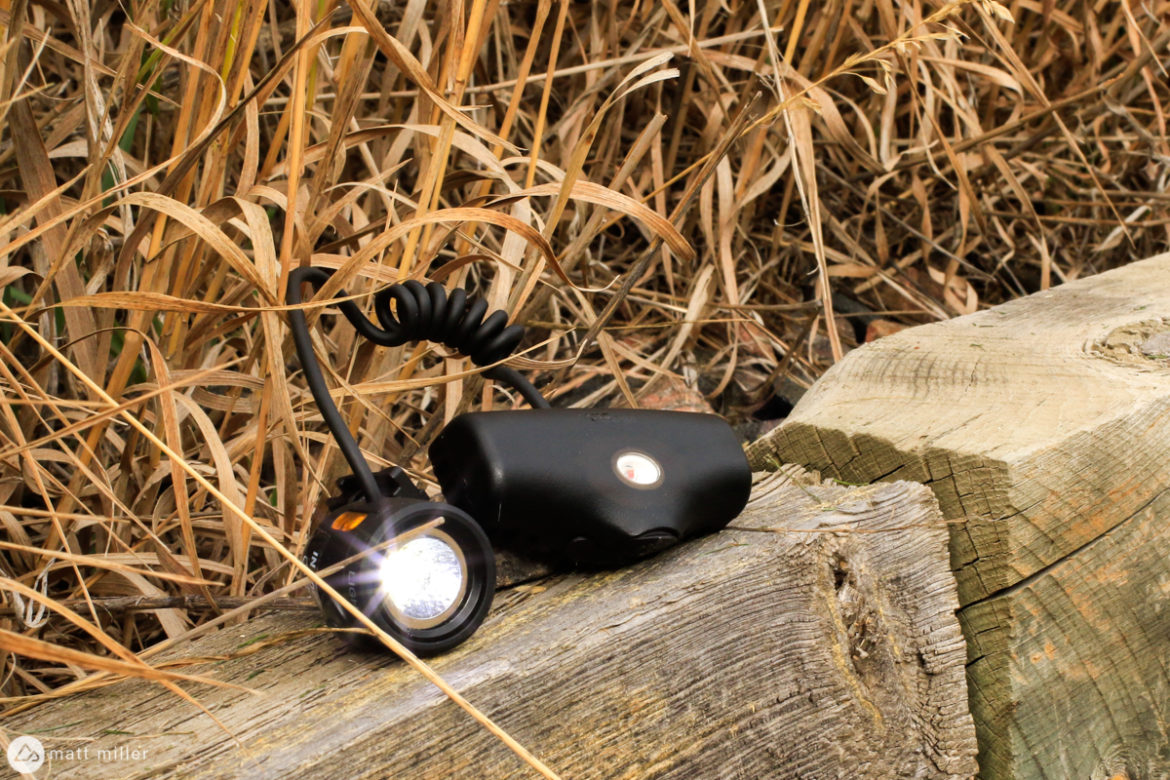 Fall is likely the best season for most mountain bikers to ride. The temperatures cool down, there’s a new range of colors in foliage, and the golden hour and light from the sun gets prettier and prettier. There are a few exceptions though. It helps not to think about the fact that the season is mostly over soon. And, riders can’t wander aimlessly into the woods without a light.

Having a good light in the gear drawer is something every mountain biker should have. If allowed on local trails, there are fewer people hiking or riding at night and it kind of makes you feel like a kid again.

Light and Motion released a few new bike lights this year. The Vis 360 Pro is a helmet mounted light and the Vya Pro Smart Headlight and Taillights are great safety measures for pedaling home from the trail. 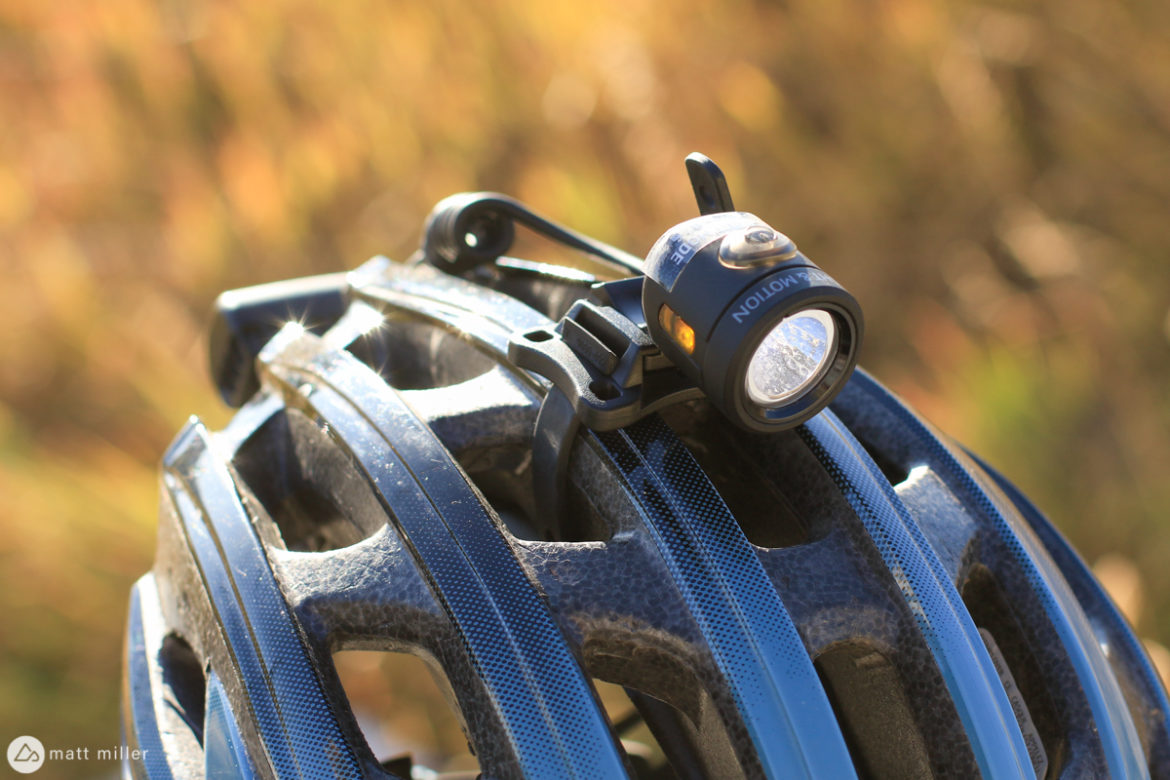 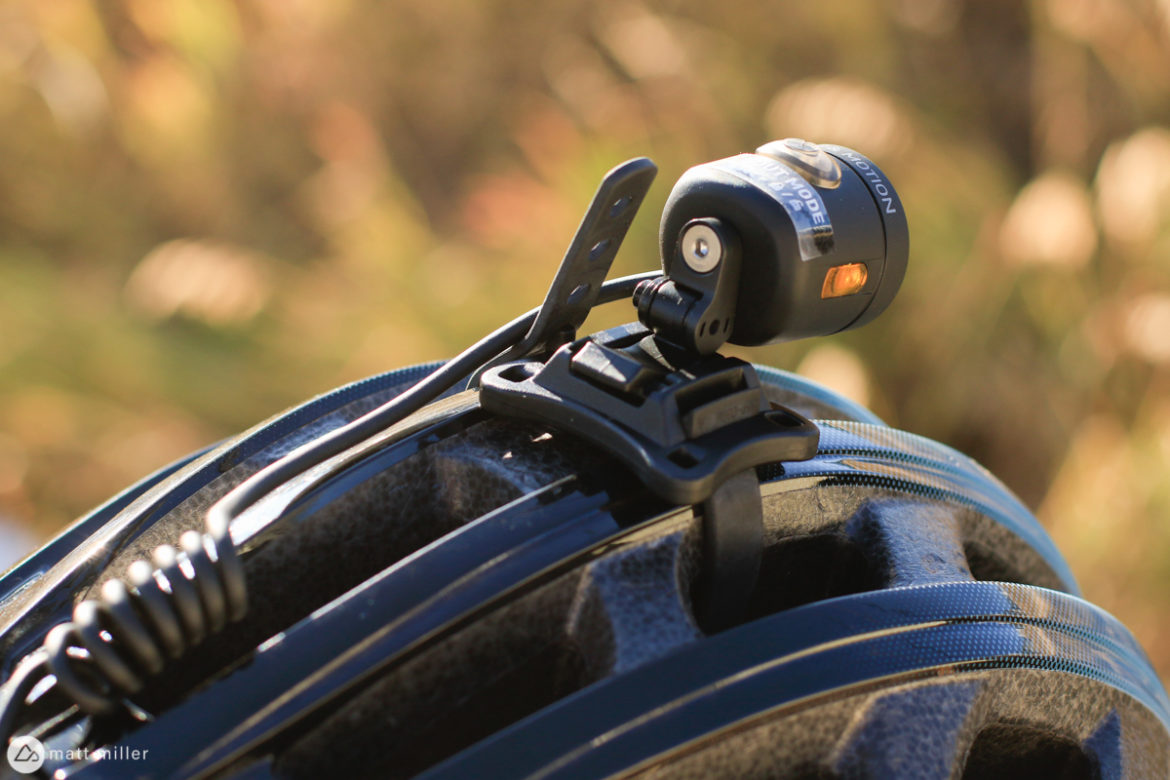 The season gets real when you finish up a ride after the sun has set and you wish you’d spent more time hanging out in caves this summer to better your night vision. Of course, if you were smart enough, you would have brought a light to the cave also.

What I like about Light and Motion is that their lights offer a few smart and thoughtful features that other lights miss out on. They aren’t just cramming lumens into a bulb for the sake of reaching a number of notoriety. For example, the amber side lights that are specced on either side of the lamp, on both the Vis 360 Pro and the Vya Pro lights, are incredibly useful. 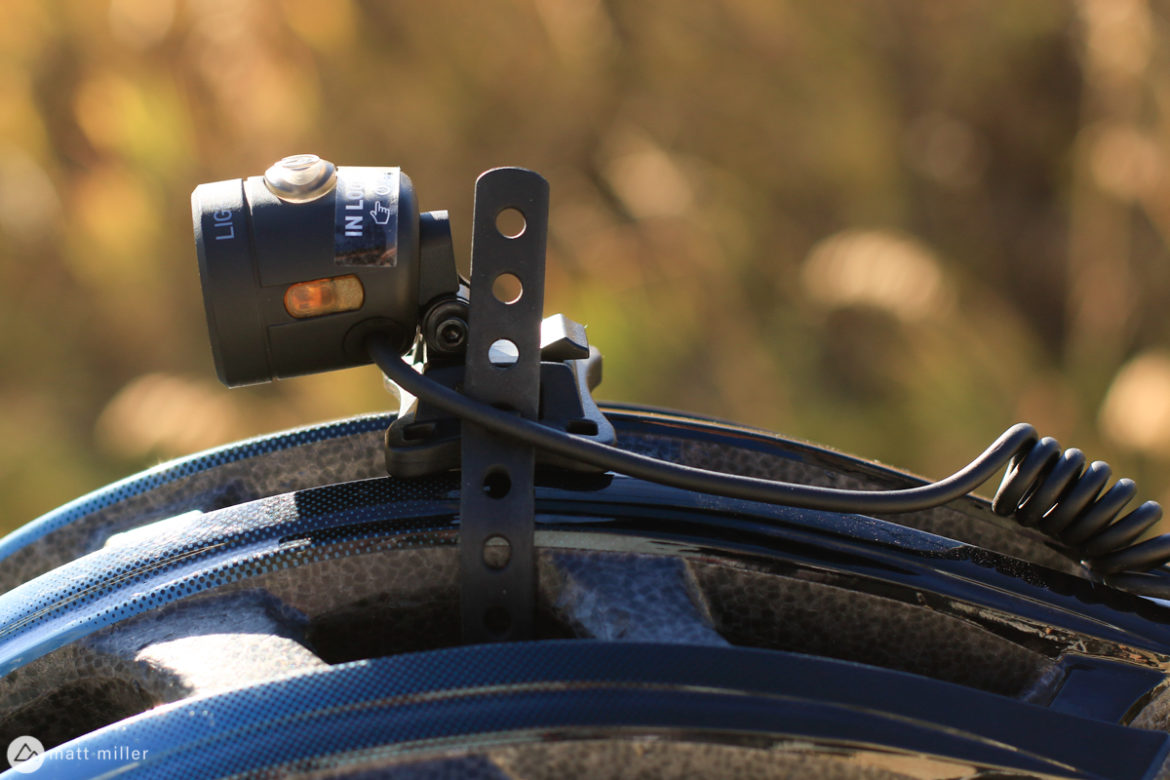 For riders who end up in traffic on their trail rides at one point or another, these side-visible lights actually matter a lot. Light and Motion cites a study that shows 70% of cycling accidents happen in intersections, because if a cyclist wearing a lamp is perpendicular to a car, say on the right side of the road, then the light is only visible on the left side of the road. The side lighting on the Light and Motion lamps give a stronger signal to vehicles.

Light and Motion’s lights also pulse, rather than flash. With a pulsing beam, drivers can more easily detect the distance between them and cyclists. Again, these features aren’t going to matter to some riders if they only use their lights on the trail, but I like to know that Light and Motion is putting a little bit of research into the safety too, rather than just making really bright lights. 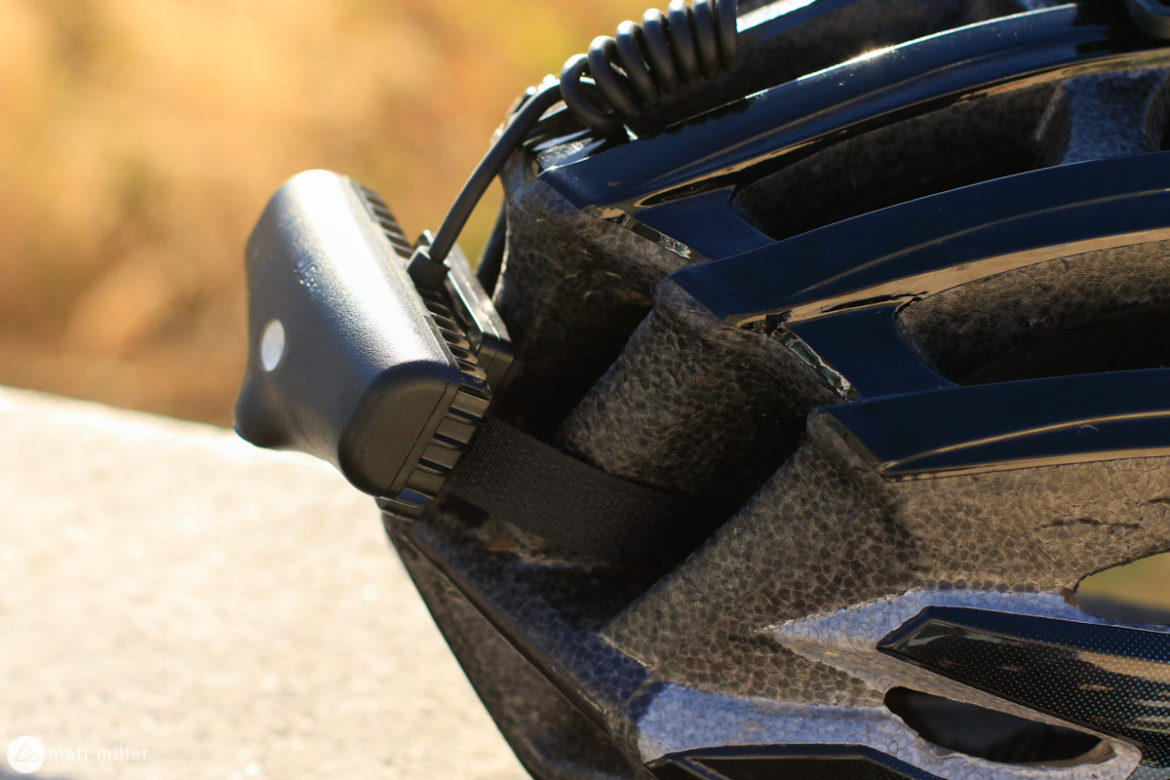 I have set the Vis 360 Pro up on two different helmets now without an issue. On helmets with MIPS liners, riders need to slip the rubber and Velcro straps under the liner so that the helmet can properly rotate in the event of a crash.

At 140g — about five ounces — the light adds a noticeable amount of weight to your dome, but not too much. The Vis 360 Pro is easy to operate with one touch on the top of the lamp. Press again, and again to change the mode or brightness. Both the battery pack and the lamp can be snapped in and out of the mounts, so that riders can leave the small mounts on during the day and take the light off easily. 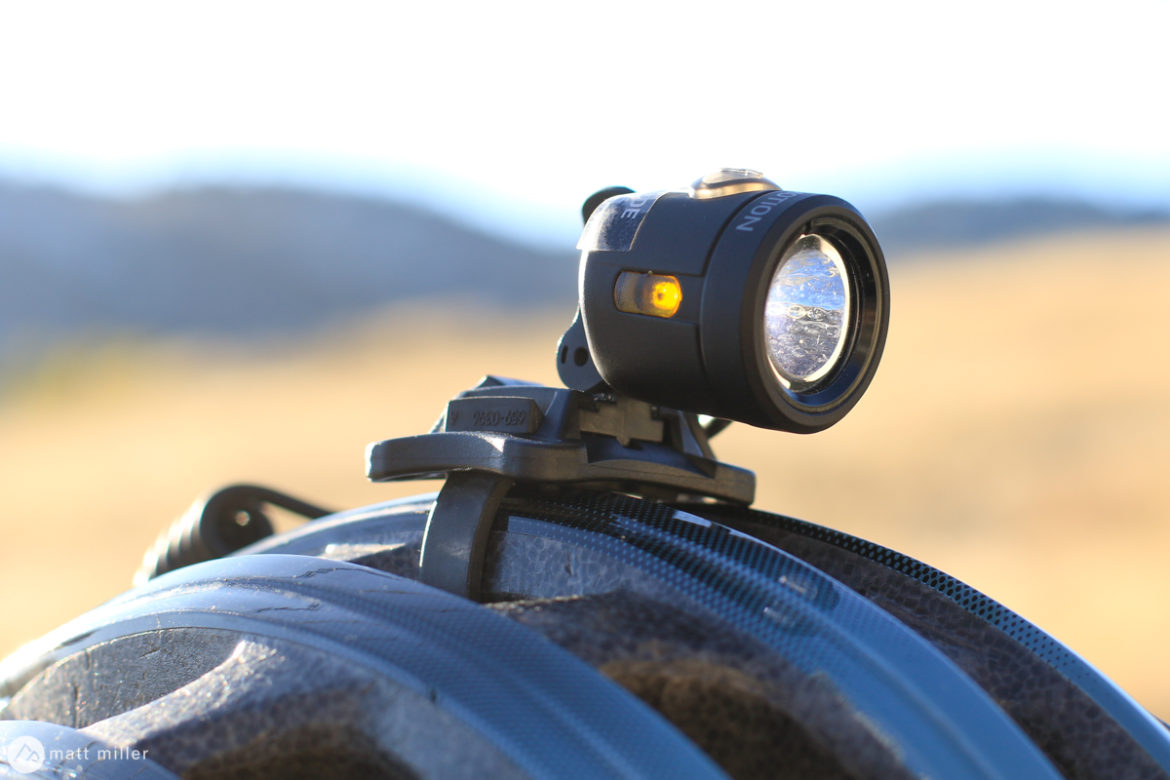 The beam angle is easily adjustable and there are small detents in the mount to find the right spot for the light to shine. The actual beam is a nice, bright white with concentrated light, but with a decent gradient spreading outward.

Battery life can vary between two and sixteen hours depending on brightness. At the highest, 600 Lumen setting, there’s a lot of light to get down a trail to the parking lot, but in dark areas, with more technical trails, I prefer to run a second handlebar lamp with the Vis 360 Pro.

The Vya Pro Smart lights are also very handy to leave around and easy to use. They are motion sensitive, and if they are plugged into a bike, even a little bump will turn the lights on. 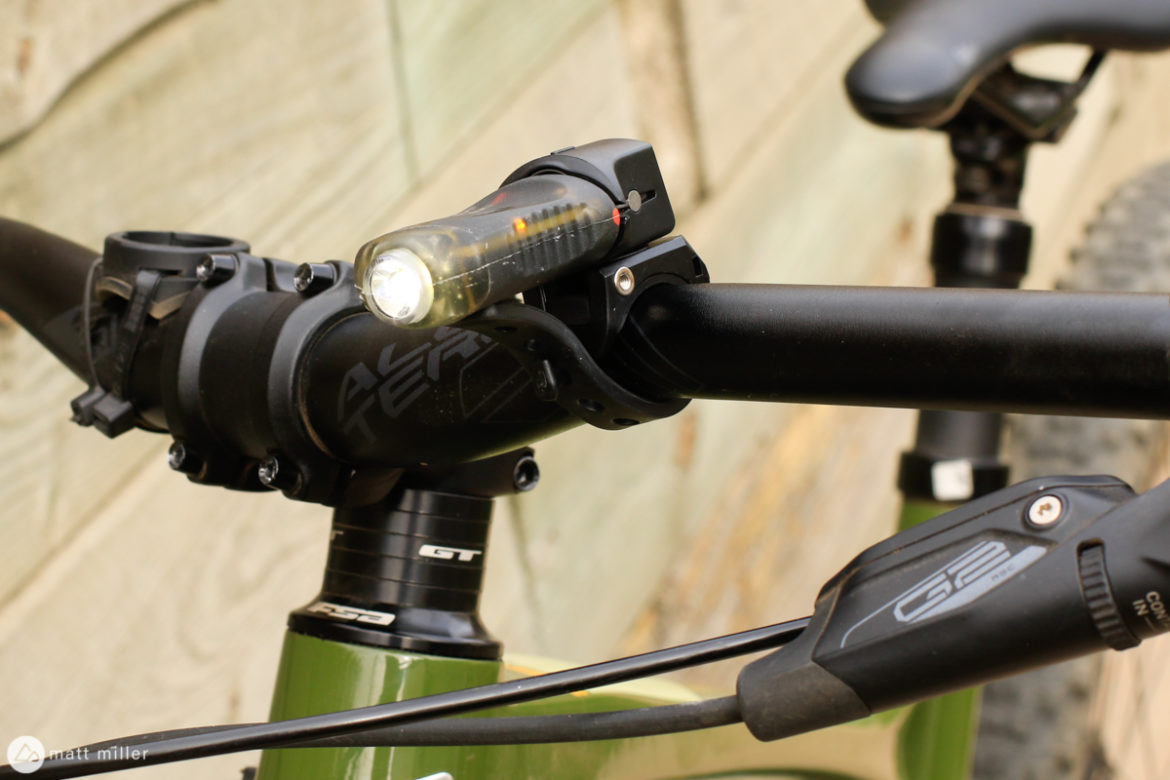 The tail light pulses and flashes for maximum rearward safety. By inserting and twisting the lights into the mounts, they are ready to go. Twist to remove, and insert the lights into a USB outlet to charge. The battery life on both seem reasonable. It’s also a decent idea to stuff both of these into a lumbar pack on the next post-workday ride which may end after dark. Even though the Vya Pro headlight isn’t super bright, it will make the journey back down the trail much easier. 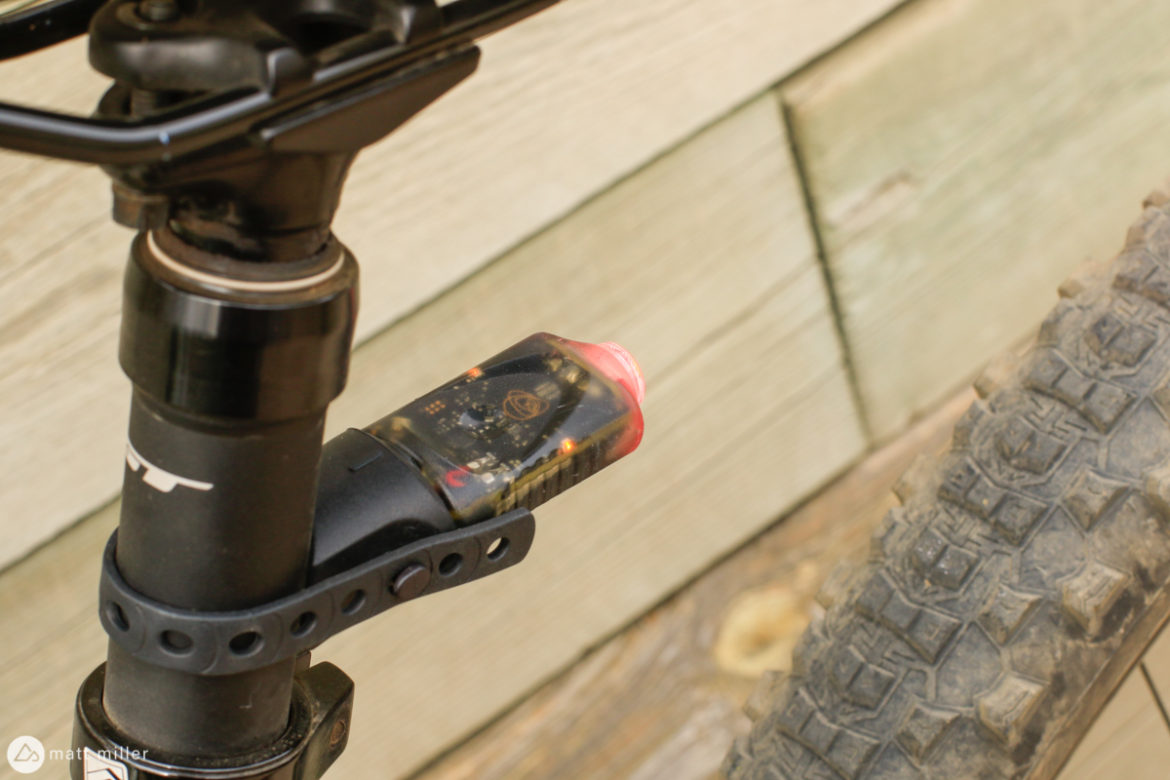 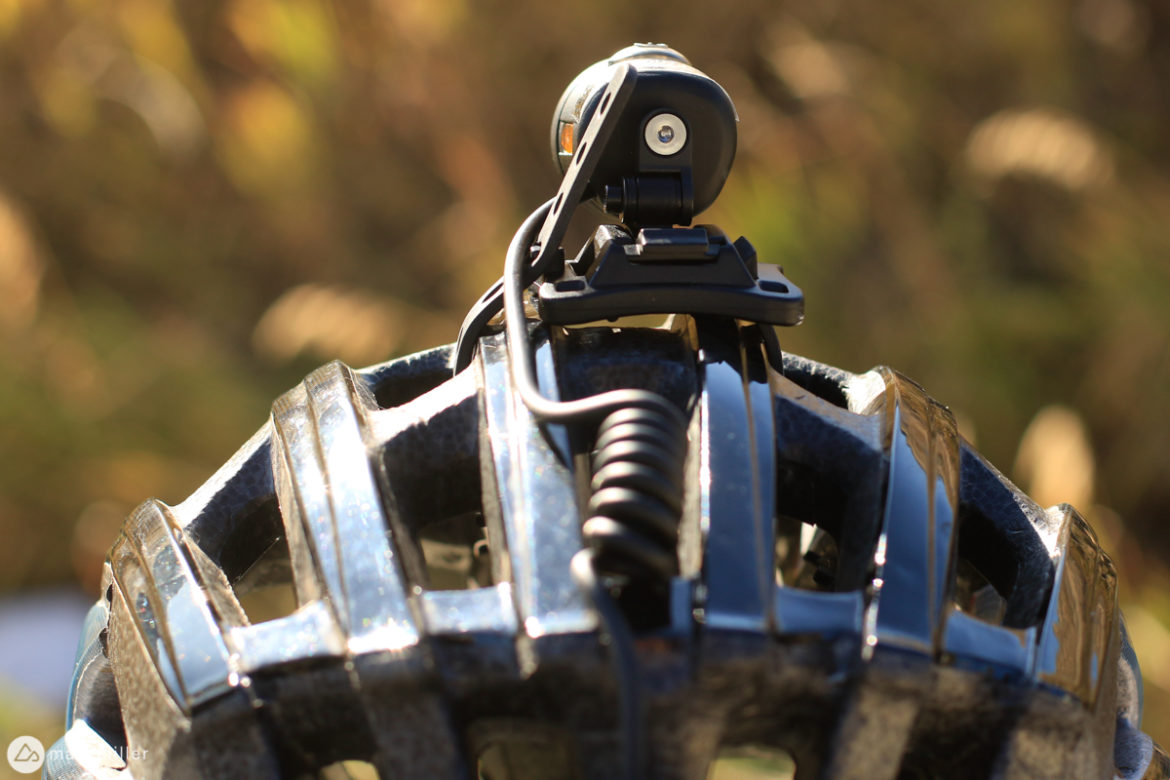 The Light and Motion Vis 360 Pro and Vya Pro Smart lights both have thoughtful and functional features, and it’s great to see a light manufacturer think beyond the lumens. I still prefer to run a bar and head lamp for my night rides, but in most applications the Vis 360 Pro will be enough to confidently complete a two-wheeled dash in the dark.

Thanks to Light & Motion for providing the lights for review.

Trails
Reverberations from the Bike Boom Continue to Rock Trail Traffic
Gear
Why Kids Bikes May Need to Take a Hint From...
Community
Klunking for Kyle: Commemorating a Life with Mountain Biking's Original...
Progression
Feeling a Little Sluggish on the Trail This Spring
Subscribe
Login
Please login to comment
3 Comments
Most Voted
Newest Oldest
Inline Feedbacks
View all comments

Matt, thanks for the write up. Curious about the set up with two helmet attachments, i.e. light on top and the battery on the back of the helmet. Does that throw off the feel or balance of the helmet in any way?

It’s definitely noticeable adding the weight to your helmet, but I don’t think it’s too much weight to add. I tried to keep the battery pack as center on the rear as possible, but it depends on the helmet’s ventilation layout.