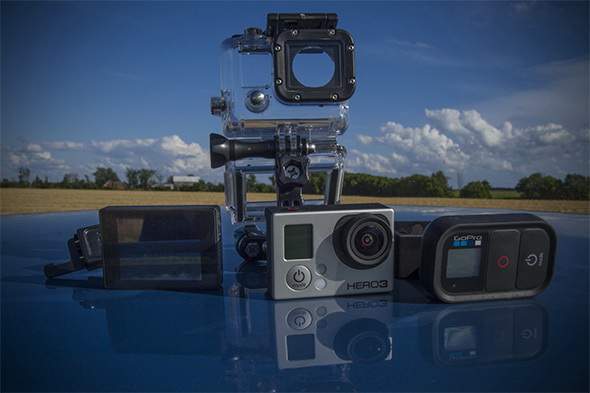 The POV sports action camera has changed the way we think about action sports. Not only has the action cam personalized video, but it has let every wannabe weekend warrior be seen on Youtube! Rejoice. You can now prove to the world you can pull a 360.

GoPro has been a major player in the POV camera game since the start, and now they have such a dominant grip on the market that pretty soon we might be referring to GoPros the way we refer to Frisbees and Kleenex. Their first product was a 35mm film version way back in 2005. 3MP and 5MP cameras followed, and in Jan 2010 the HD Hero was released (a cheaper 960p version was also released at the same time). 2011 saw the release of the Hero2. And today, we have the Hero3 line: White, Silver, and Black. 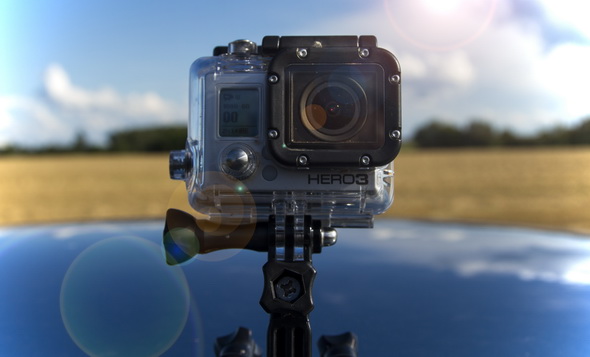 The Hero3 Black edition is every techno-nut’s dream. Unlike previous versions, the new Hero3 is a total redesign. The most obvious and welcome change is the size. Now smaller and lighter, the Hero3 is more versatile than ever. Not only is the Hero3 camera itself physically smaller, but if you purchase the LCD touch screen (which I highly recommend) as well, the camera+screen combo will still be a few millimeters smaller than previous units. 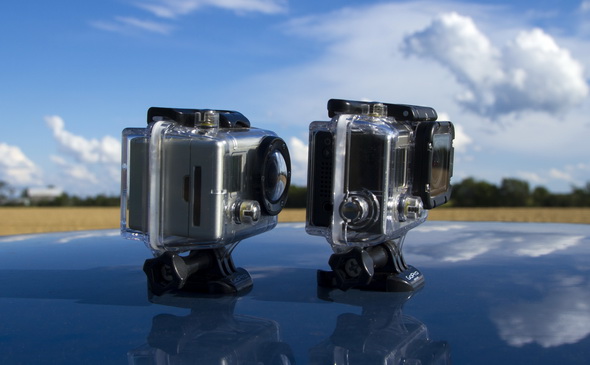 As for technical highlights, the Hero3 Black edition has a 12 MP sensor, and has an image processor that is two times more powerful than the processor in the Hero2. With all this power, your choices for video viewing are much greater. To begin, the Black can produce the following resolutions: 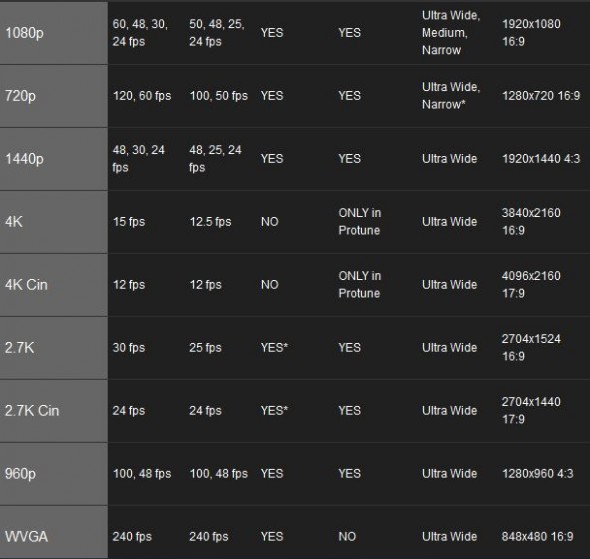 Talk about a choice of video! Did you see the 240fps option?! If I only had this camera running for one of my friend’s recent crashes… talk about slow-mo crash analyzation!

The photo mode is none to shabby, either. The F2.8 6-element aspherical all-glass lens is designed to work better in low light situations (think: under the canopy of a forest). Photo highlights include:

The Black edition is Wi-Fi compatible and comes with a remote control. The remote is waterproof to three meters and the display screen mirrors your unit to give you an indication of your camera’s settings without having to take it off of your head. If you fancy using your smart phone, the free GoPro app is definitely worth using, allowing full video and camera control. The app even allows you to upload your latest creation to your favorite social network.

What do you get when you Purchase a Hero 3 Black?

Keep in mind that if you’re already a Hero2 owner, you can reuse almost everything. The cases are different, so you’re outta luck there, but all your previous mounts are still useful. You don’t even have to remove anything from your helmet as the base plates are identical as well. 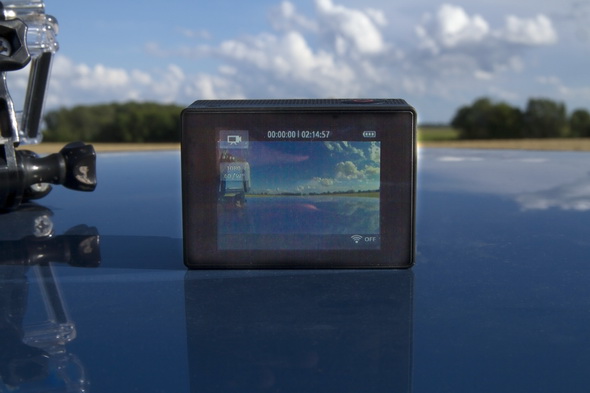 As mentioned above, I also received the LCD touch BacPac. For those like me who hate fiddling with menus, the LCD screen is a must. Like my DSLR, I can navigate using the screen rather than using two press buttons with lengthy menus: the screen makes life so easy!

On top of that, the touch screen only takes about 10 minutes of battery life away from normal operation, which cuts your video taking time down to 1:10 rather than 1:20. To me, that’s more than acceptable. Not only can I go through menus and choices faster, I can also see exactly what I am shooting! As with all other premium products, the purchase of the LCD touch BacPac includes everything you need to attach it to the GoPro Hero3.

Using the new Hero3 Black edition required a bit of a learning curve, The new options and changes made to resolution, choices of screen width, and other items took a bit of time to get familiar with. To this day, I am still playing around trying to get things right with the Wi-Fi remote. I’ve found that if I don’t use a feature often enough, I tend to forget it’s there.

That said, I am extremely impressed with the clarity of the new sensor and appreciate the quicker response when going back and forth between high and low levels of light when riding. To be honest, I don’t use the camera feature often (since I love shooting with my DSLRs), but it is nice to know I have that capability in the GoPro.

I really do love the smaller size and addition of the touch screen. To me, that’s the new Hero3’s biggest selling point! The touch screen alone encourages experimentation when taking a shot. A quick change of angle here or there, and the whole look of your video has changed.

The faster frame rates are also pretty cool, allowing you to include good-quality slow mo clips into your video creations.

Finally, the multitude of additional mounting options makes the GoPro by far the most versatile action camera out there.

To see what you can expect with your own GoPro Hero3, check out this video:

Many thanks to the folks at GoPro for sending down the Hero3 Black for review.

By far the best POV on the market! The Black edition is awesome, with the wi-fi feature and the GoPro App on my phone, I am able to change all my settings (resolution, fps, mode, orientation, etc) from the app on my phone. This also gives me the ability to view what the camera is viewing like on the LCD screen, that way I know my POV on my chest harness is aimed correctly. I haven’t used the phone app since the latest update, but have heard that it allows for uploading your videos right after filming them with minor video editing features. Awesome video quality, I typically film my rides at 1080p @ 60fps, good for fast riding and being able to do slow motion for those crashes! Lovin’ it!

On this video, see how it’s “glitchy”, minutely starts/stops? I have had the same issue on my GP3. Any ideas why or how to eliminate?