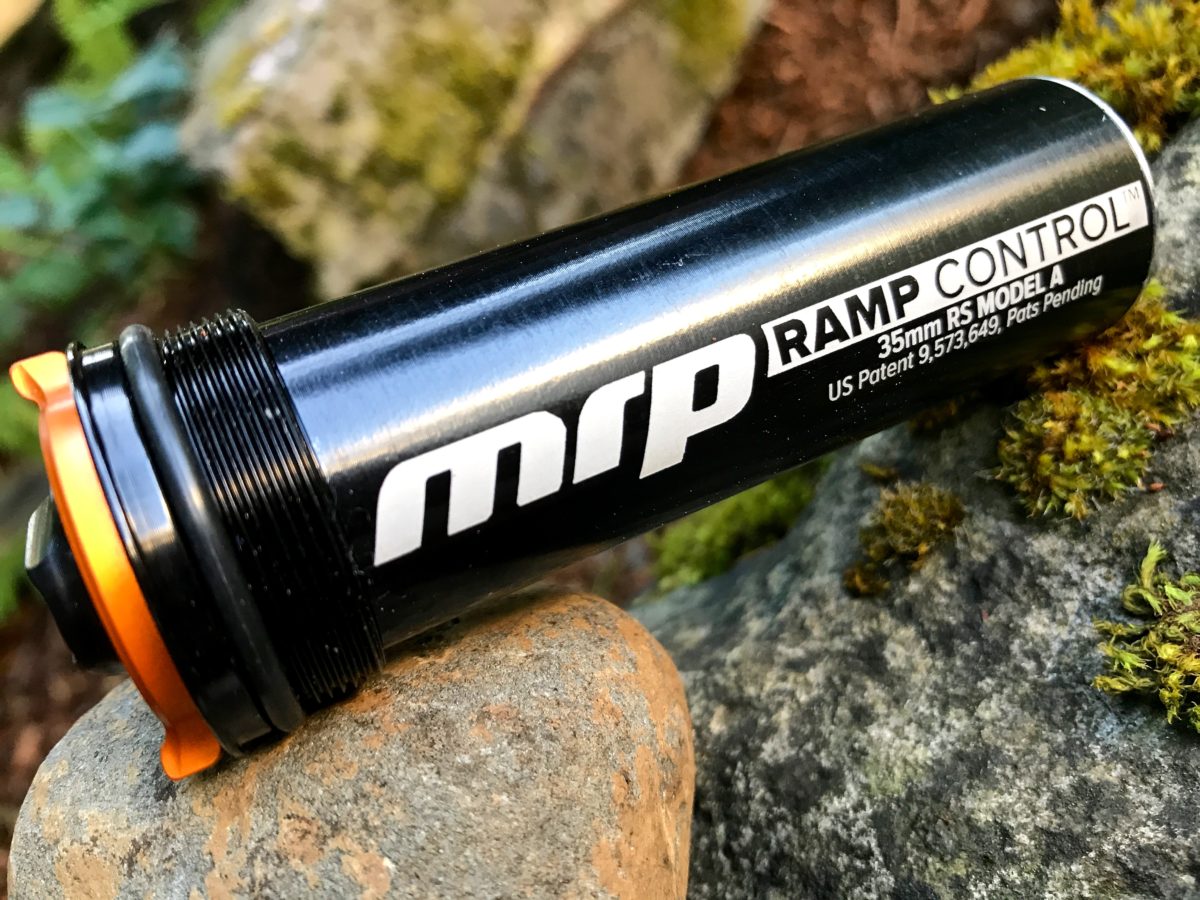 It takes time to find your suspension’s sweet spot. Rider weight, terrain, and riding style mean no two forks or shocks feel the same. Suspension tuning is further complicated because no two trails are the same, either. Even when you get your suspension to behave mostly the way you want it to, it won’t be perfect for that trip to Moab or Whistler. And, if you have tuned it for steep, rocky terrain, your suspension won’t be optimal for a smoother, flowy trail centers.

MRP takes suspension tuning to another level to enhance ramping, reduce bottom-out, and instantly change the spring rate of an air fork. Mounted inside the fork’s air chamber, the MRP Ramp Control Cartridge provides on-the-fly, volume-reducing adjustability. The Ramp Cartridge mimics the effects of one to four volume spacers at the turn of a dial, for a more progressive end stroke when you need it (and no ramp up when you don’t). 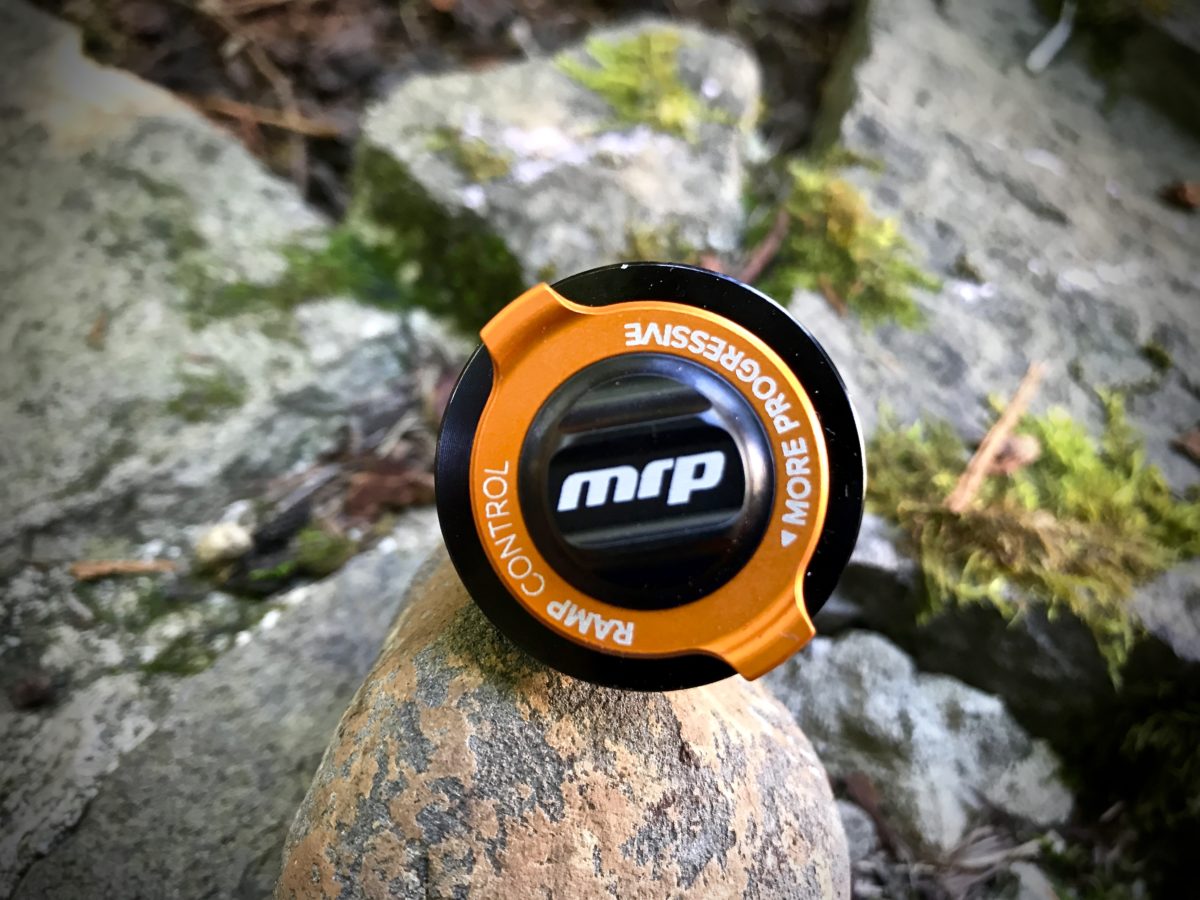 First, let’s talk about how you’d arrive at a point where the Ramp Control Cartridge might make sense.

Basic fork tuning begins with adding air to achieve a desired level of sag. Sag is the amount the suspension compresses under your weight and riding gear. From there, adding or releasing air depends mostly on your riding style and terrain. More air prevents your fork from running out of travel on bigger impacts, but too much air reduces small bump sensitivity in the initial one-third of fork travel.

Rebound controls the rate of speed at which the fork extends after compression. Rebound is dependent on air pressure so higher pressures should be offset by slower rebounds, and vice versa for lower pressures.

Low-speed compression controls the rate at which a fork compresses during slow inputs like weight shifts, cornering, braking, and G-outs. High-speed compression damps the same way but activates during bigger hits, landings, and square-edge bumps. Low-speed and high-speed refer to the velocity of the shaft under compression, not to how fast you’re going on the trail.

As the fork encounters impact, it compresses. Most air springs naturally have a progressive spring rate. This means that the more the fork compresses, the more force is required for further compression. The result is an exponentially firmer fork as it dives deeper into travel. This is demonstrated graphically below by the yellow line.

In the late phase of compression, the fork is said to “ramp up.” Ramping is a good thing as it provides resistance to running out of travel (bottoming out). Regardless of the progressive nature of an air fork, bottoming out can still be an issue, especially if you’re a heavier or aggressive rider. This is why some riders seek an even more progressive spring rate than what a stock fork (sans spacers) can provide.

To resist bottom-out and augment ramping, you could add more air and/or run more high-speed compression, but this sacrifices small bump compliance. Perhaps the most widely-used method of achieving more ramp-up is to use air volume reducers. Sometimes called tokens or spacers, volume reducers are installed inside the fork’s air chamber according to specific manufacturer guidelines. By simply taking up space inside the fork, pressure now increases quicker to reduce the risk of bottoming out the fork travel. The more progressive spring rate from adding spacers is demonstrated in the graph above by the orange and red lines.

Installing volume spacers is usually very simple and almost anyone with a socket wrench can do it. Still, you must carry out this task in a clean, controlled environment so you don’t contaminate the inside of your fork. Later, if you want to add or subtract spacers, you must return to your tools and shop. The MRP Ramp Control Cartridge is an on-the-fly, adjustable volume reducer that eliminates the need to reassemble the air chamber for volume spacer changes, while adding more trailside tunability.

MRP takes the practice of using volume spacers to create a more progressive spring rate a step further. Installed in the air chamber, the Ramp Cartridge takes the place of your fork’s current top cap. This means the cartridge also serves as your air valve. Due to variations in fork chassis, MRP currently offers five different models of the Ramp Cartridge, so it’s imperative you check for compatibility using MRP’s chart (below). For now, it appears the Ramp Cartridge is only offered for Fox, RockShox, and X-Fusion Type A forks. I demoed the MRP Model A for my 2016 Rockshox Pike Solo Air 27.5″.

Turning the Ramp Control dial clockwise limits the ability of air to enter the device, effectively making the cartridge’s entire volume a spacer — roughly the equivalent of four spacers. Turning the dial counterclockwise opens the cartridge to air, which flattens the spring curve. According to MRP, the Ramp Cartridge has little to no effect on low to moderate shaft speeds and only kicks in on hard, high-speed hits. In theory, this means you can tune the amount of bottom-out support you want independently of sag or air pressure settings.

On the trail, the MRP Cartridge dial is as easy to turn as any other damper switch, so adjustment was literally on-the-fly. Ramping reliably occurred in a progressive nature throughout the entire range of 16 clicks. There was a clear difference between wide-open, halfway-in, and fully-closed, but changes between single clicks are virtually imperceptible. I imagine each click roughly equates to the volume of one quarter to half of a traditional fork token. As for how well the Ramp Cartridge reserves its progressive prowess until the latter stages of stroke cycle, that’s difficult to distinguish on the trail.

I’ve always enjoyed a more progressive spring rate so I only ran the MRP Cartridge wide-open for the initial comparison. For the rest of my test time, I kept it somewhere between 5 and 15 clicks, as I was mostly concerned about how some volume reduction compared to more volume reduction. That said, you still have the option to open the cartridge up, unmasking the inherent progressiveness of your stock fork of choice. I also kept my fork pressure the same as before I installed the device to limit variables. 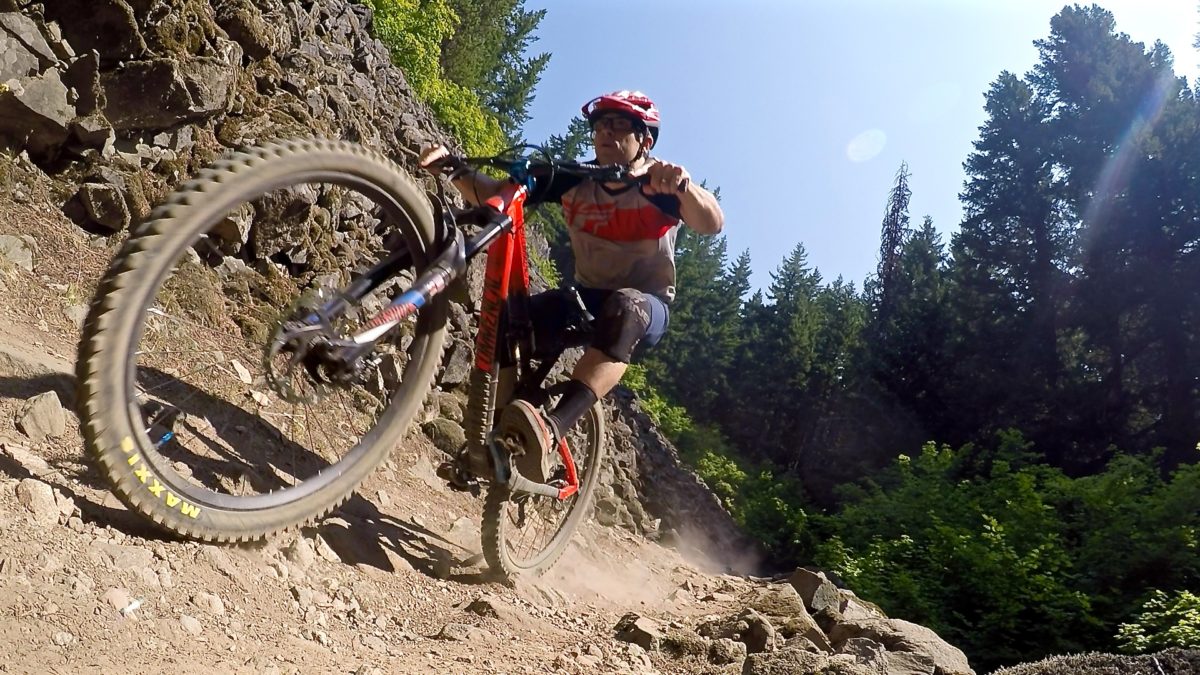 What I enjoyed most about the MRP Ramp Control wasn’t trying to achieve an exact number of clicks for specific circumstances, but rather the ability to haphazardly crank it up or down when the mood struck. It was more about having an idea of where I was on the spectrum of soft to firm and, without much thought, dialing it up or down depending on the trail and what I was looking to do.

Increasing the Ramp Control produces a more responsive feel and inhibits bottom-out. For flowy, less-technical trails, the Ramp Cartridge enhanced my ability to pop in and out of berms and double up on rhythm sections. Ramping greatly augmented my ability to pump for speed and still charge aggressively when things got choppy and steep.

On trails with repeated, moderate-size hits, or less-demanding, slower trails where most of the action is mid-travel, I’d back the dial off to reclaim plushness. Since pressurizing the air chamber to combat bottom-out isn’t necessary with volume reduction, the Ramp Control won’t affect the initial stages of compression, thus, small bump sensitivity does not suffer.

I found that I prefer more progression, and I’ll probably settle on a certain setting and leave it for the majority of my rides. Still, I love the idea of being able to dial it back if and when I want. Who knows where I’ll be riding years from now, or what new fork set up technique I’ll learn. With the MRP Ramp Control as another tuning option, I’ll be able to adapt to my needs more quickly.

Who will buy this?

The MRP Ramp Control Cartridge costs $139.95, which is about $139.95 more than a stack of three to four RockShox tokens or Fox spacers. This begs the question: for whom exactly is the MRP Ramp Cartridge intended?

While I won’t claim it’s impossible to change out spacers on the trail, I would say you’re nuts if you try. Installing spacers requires tools too heavy to haul and a cleaner environment than the woods can offer.

A typical trial-and-error approach to finding the correct amount of traditional volume spacers goes something like this: you install a couple tokens the night before a ride, you ride the next day, decide whether you need more or less, and it’s back to the garage for another installation process. You’ll have to wait until the next ride to decide if the new setup was the right move while trying to pull from memory what the previous spacers felt like. This traditional way, while time-consuming, is still cheaper, but doesn’t offer the instant tuning of anything between one to four volume reducers at the turn of a knob. In short, $139.95 buys a shortcut for those learning how much volume reduction they need. 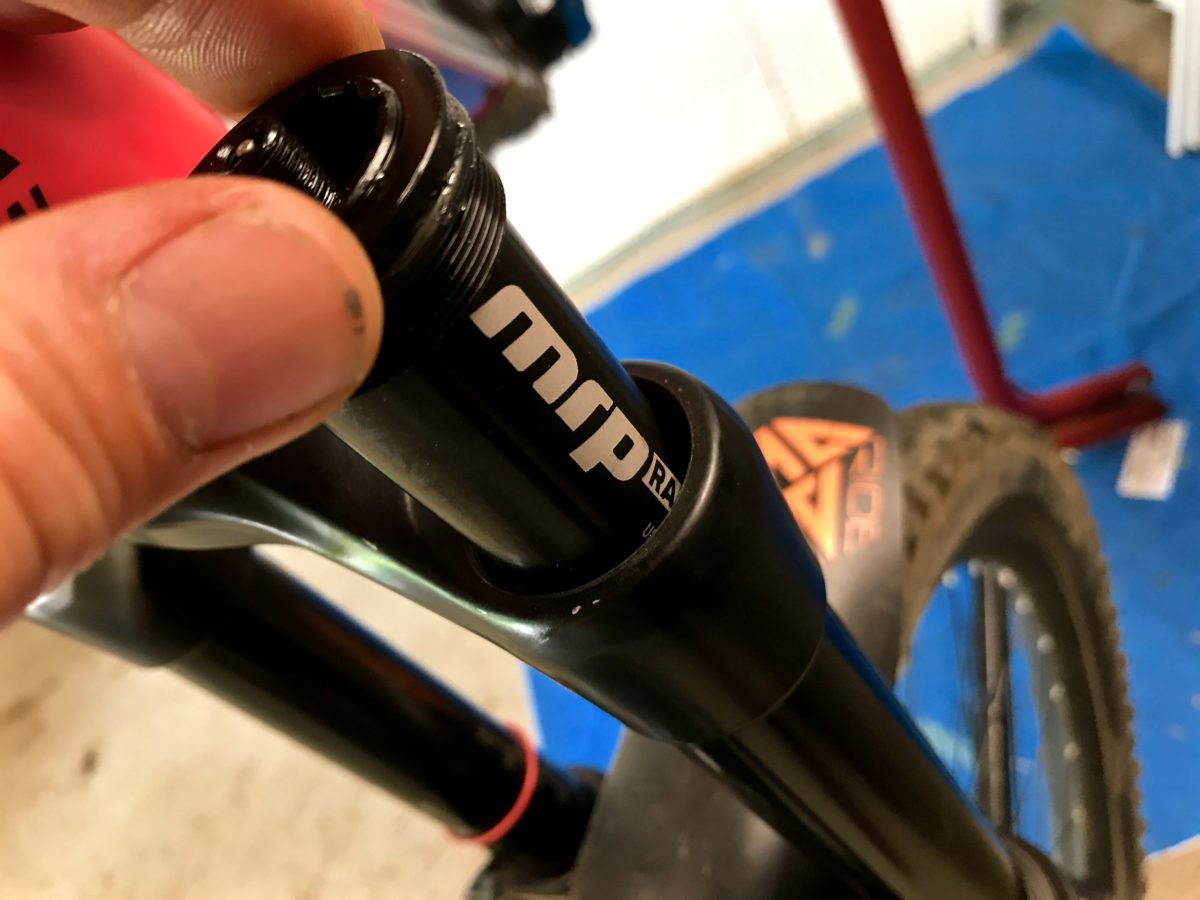 Most of us cannot afford multiple bikes for multiple applications, so we settle on one bike to rule as much terrain as possible. This means we compromise on any terrain for which our bike wasn’t necessarily optimized. A softer-feeling fork may be just the ticket on that after work quickie but may be less than ideal for the big drops next weekend at the bike park. If you’re asking one bike to do it all, purchasing the MRP Ramp Control may be worth the extra tuning capabilities it provides.

Downhill racing typically takes place on one trail over and over, so however you setup your suspension in practice will suit. Enduro racing, on the other hand, entails multiple stages, each on a different trail. As such, each trail will be more or less gnarly than the next. The level of fork progressiveness can be tailored to each stage using the Ramp Cartridge. 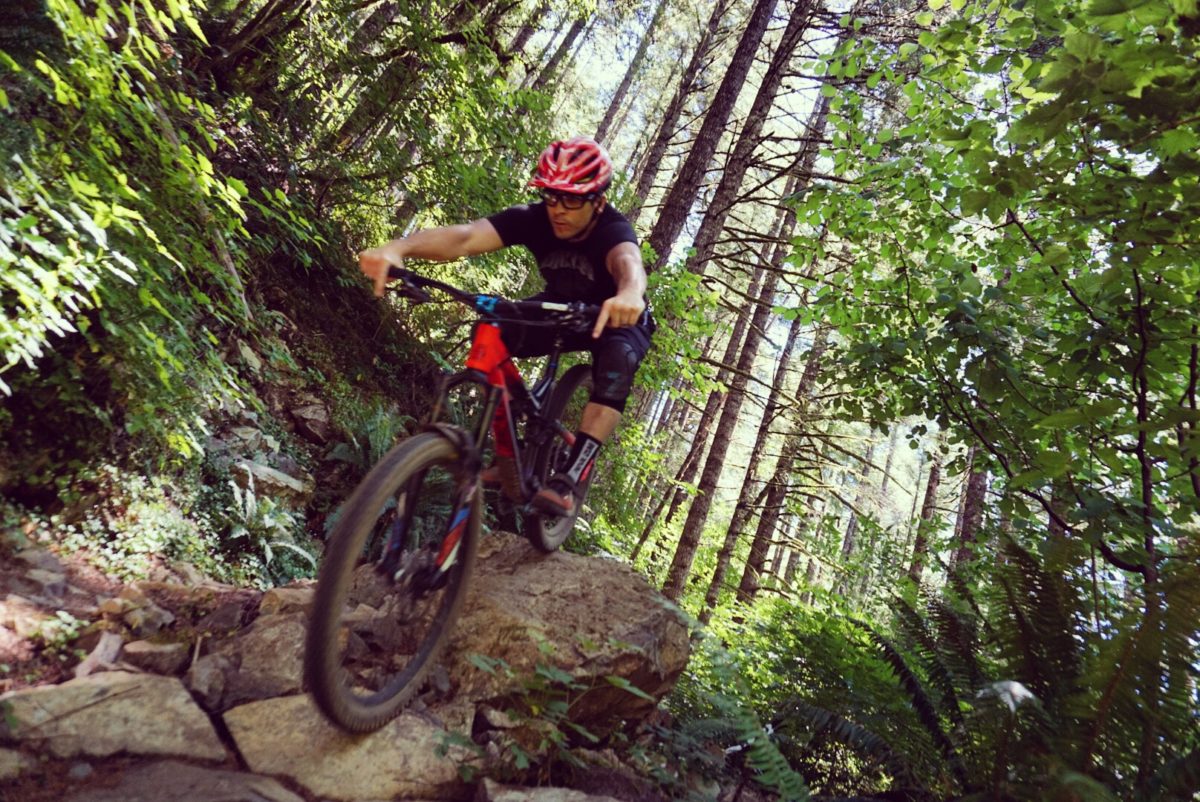 Finally, the MRP Ramp Cartridge is plain ‘ole fun for anyone, especially those contraption captains who just like to tinker. I’m not a volume reducing novice, nor do I race, and I have a couple bikes for different types of riding. I fall into this category of those who applaud small steps in innovation that may make my experience more enjoyable, even if it is just a click or two.

Unless you ride the same trail every time, suspension tuning is a compromise where you either (a) put up with less-than-optimal settings for terrain outside of what you typically ride, or (b) take the time to “tweak-tune” every time you ride a different trail. I found neither as desirable as having instant control of ramping up or down my fork with the MRP Ramp Control Cartridge.

Thanks to MRP for providing the Ramp Control Cartridge for review.

Glad to see your write up here. I ride a “progressive” hardtail with 120-130mm Pike, and I’m wondering if you’d agree with the following addition about who this product is for: Riders with 140mm+ of full suspension.
Tokens get my fork where I want it, and I can’t envision a situation where I’d want more on the fly adjustability with this bike. When riding jump lines or facing bigger hits, the stock adjustments do the trick well enough. Perhaps the limited functionality and purpose of this type of bike keeps the benefits from such a product from being of much use. Thoughts?