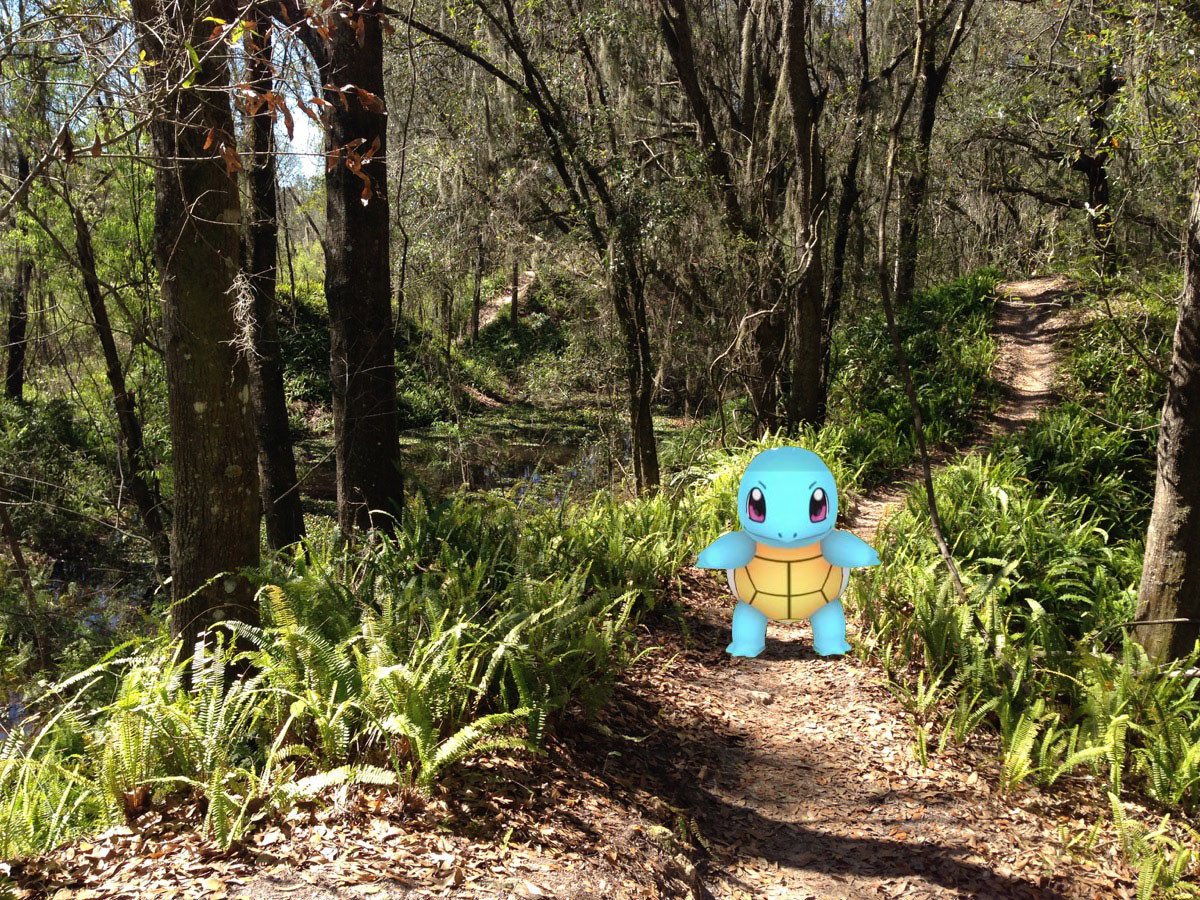 On Sunday, Greg and I received a message from former Singletracks writer and Southern Wheelworks owner, Dustin Gaddis,

“Pokemon Go & MTB trails. Seems like an article begging to be written.”

I was vaguely familiar with the game, having just read an article earlier in the day about a girl who discovered a dead body in a river while playing Pokemon Go. Then, just minutes after receiving Dustin’s message, I came across a mountain bike ride in the Singletracks Strava feed titled, “Pokemon Go in Annadel.” Apparently Pokemon has already invaded mountain biking.

What is Pokemon Go?

I downloaded the Pokemon Go app just last night so I’m no expert, and there are many complex layers to the game. However at a basic level, the app places Pokemon characters in random, real-world locations and users have to walk, bike, or drive to “find” them. It’s basically a map app that leads you to Pokemon characters. When you find a Pokemon, you can “catch” it by taking a photo with your phone’s camera. The character is superimposed on the image so it looks like the creature was there IRL.

I have to say, as someone who participated in geocaching a decade ago, Pokemon Go is pretty brilliant. The game builds on the idea of using technology to explore new places and heck, it’s a video game that forces players to get off the couch and move around outdoors.

According to this article, the game is already the top download in the US iTunes Store. But this success is not without controversy: robbers have used the game to lure would-be victims, and players are parking in front of random peoples’ houses because the game told them to. All of this reminds me of the growing pains experienced by the Strava app, as early players took risks to claim virtual KOMs at the expense of the safety of themselves and others.

So yeah, Pokemon Go & MTB trails… there’s totally a connection between the two.

I always had this idea that it would be cool to combine mountain biking and geocaching but the thing is, I could never figure out a way to make it fun. Geocaching involves looking for hidden objects, usually placed off trail, and often buried beneath the ground. Who wants to stop their bike, hike into the woods, and dig up a box during their ride? Maybe some people do, but not me.

Pokemon Go, on the other hand, is like overlaying a game on top of your everyday trail ride. Stopping to snap a photo of a Pokemon character is no sweat, and you earn points (points!) as your reward.

Now, instead of Stravaholes, you’ll bump into riders who are staring at their smartphone screens instead of the trail in front of them, hoping to find a Pokemon. People will ride off trail to catch a Pokemon randomly placed in the woods.

Or maybe they won’t. Maybe instead this will get the next generation out on the trails more often, and they’ll realize that mountain biking is actually more fun than a video game. Or maybe it will appeal to riders who ride for fun instead of Strava KOMs, and everyone will relax on the trails just a little bit.

At this point the whole thing could go either way, but I’m convinced that it will make an impact on our sport one way or another.

Have you combined MTB with Pokemon Go? Tell us about it in the comments!

“Maybe instead this will get the next generation out on the trails more often, and they’ll realize that mountain biking is actually more fun than a video game.” Hopefully this is the case, but I have a hard time having an optimistic outlook on this.

The only fortunate thing for mountain bikers right now, IMO, is that the Pokemon are concentrated in high population centers. So this means that while you might find a Pokemon in Annadel close to San Francisco, that you’re not likely to find one in the middle of nowhere in Montana. In an official how to I was reading, it recommended looking for permanent artistic and historic landmarks in order to find Pokemon. I think they called them “pokestops.”

In fact, that’s been a point of controversy locally near where I live: people are downloading the app, but apparently even around town, there are no Pokemon to be found since apparently, we’re too rural.

In any case, I personally hope that they stick to all the already overpopulated tourist stops, and leave the woods out of it 🙂

One of my bike camp students found a Pokemon in the middle of nowhere Montana.

Timely as ever. Just yesterday, my son asked if I could change the tire on his bike because it was flatted. I said no, but that I could show him where a spare tire and tools are. As I walked him through the change I asked why the sudden need to ride. His response: to hunt Pokémon. Not on trails but it is outside. Small wins.