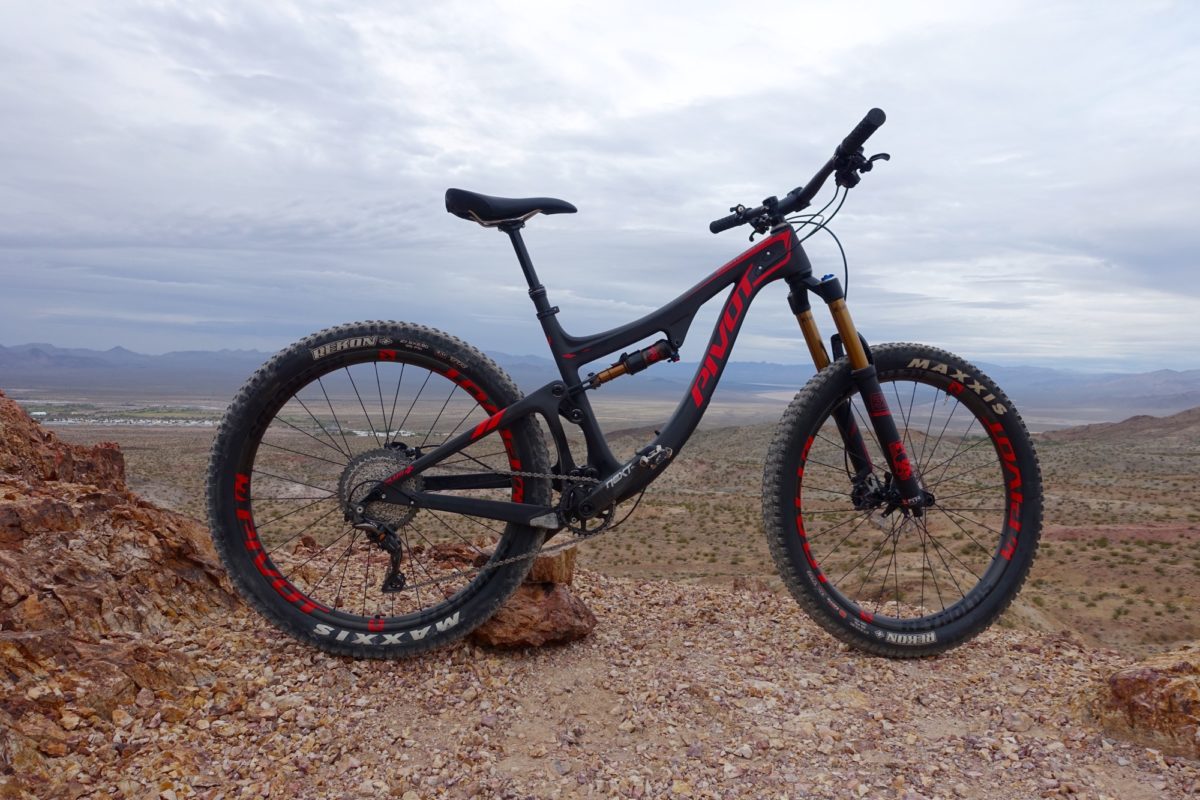 Having earned a coveted spot on our list of the 5 Most Innovative Mountain Bikes of 2016, I knew that I had to get on the Pivot Switchblade to see if the bike could stand up to the hype.

The Switchblade gets its name from the ability to quickly and easily swap between 27.5+ and 29″ wheels and tires. I opted to test the bike in the 27.5+ mode, natch’. 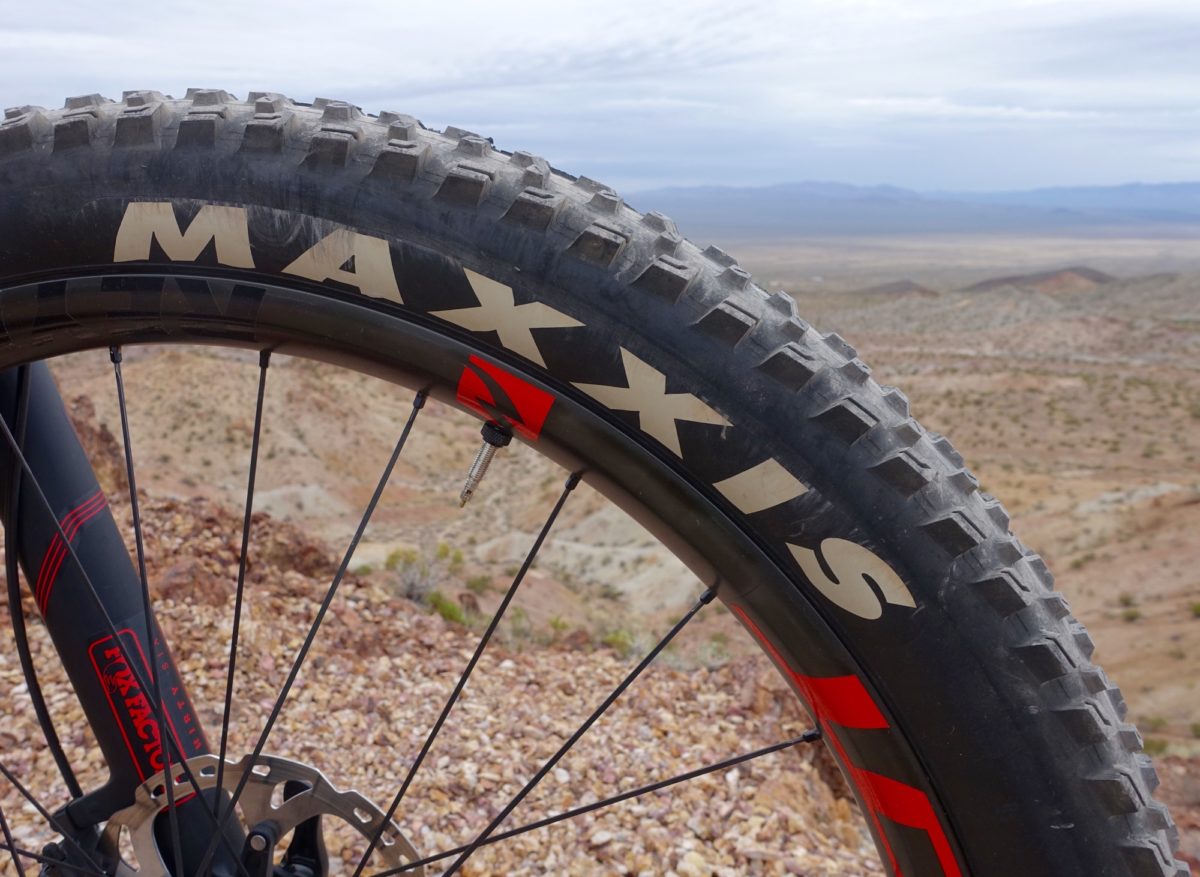 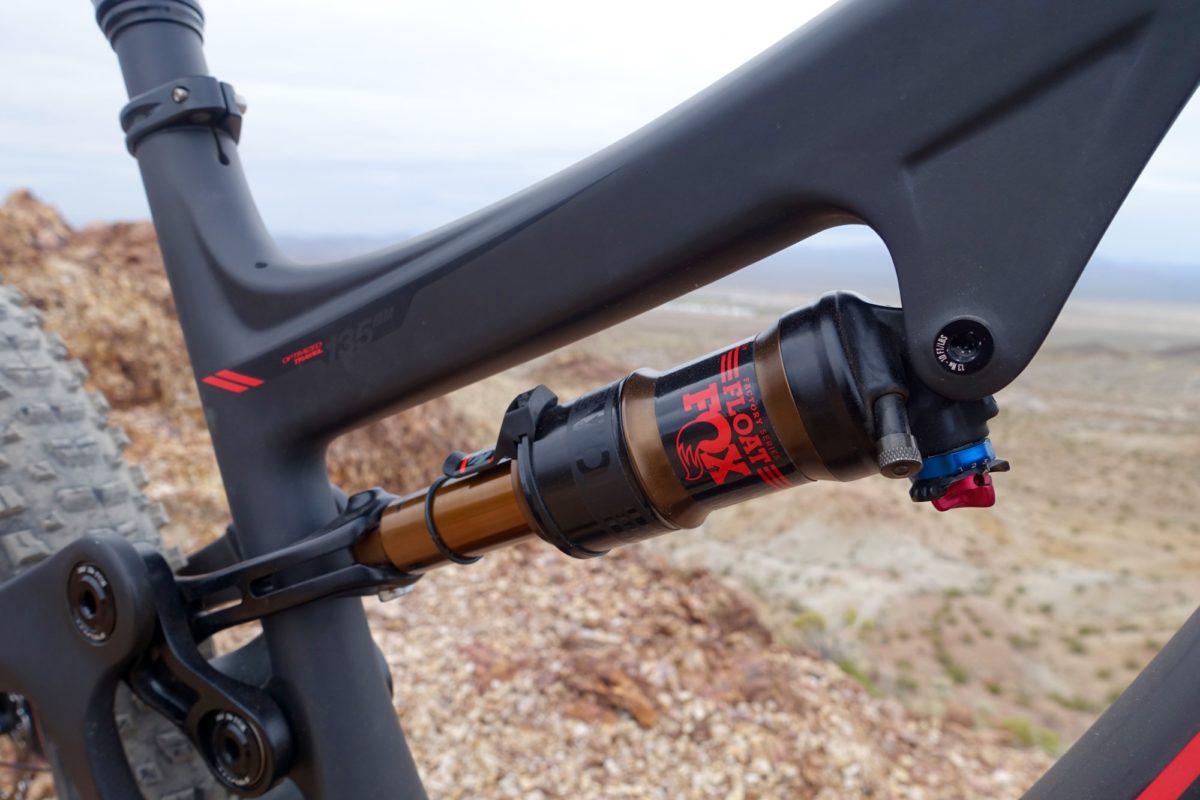 The Switchblade’s geometry is right in line with many modern trail bikes, with a 67.25-degree head tube angle and 428mm chainstays (more on that below). As always, Pivot offers exceptional clearance for short riders, with an XS size frame that offers a 26.8″ standover height. 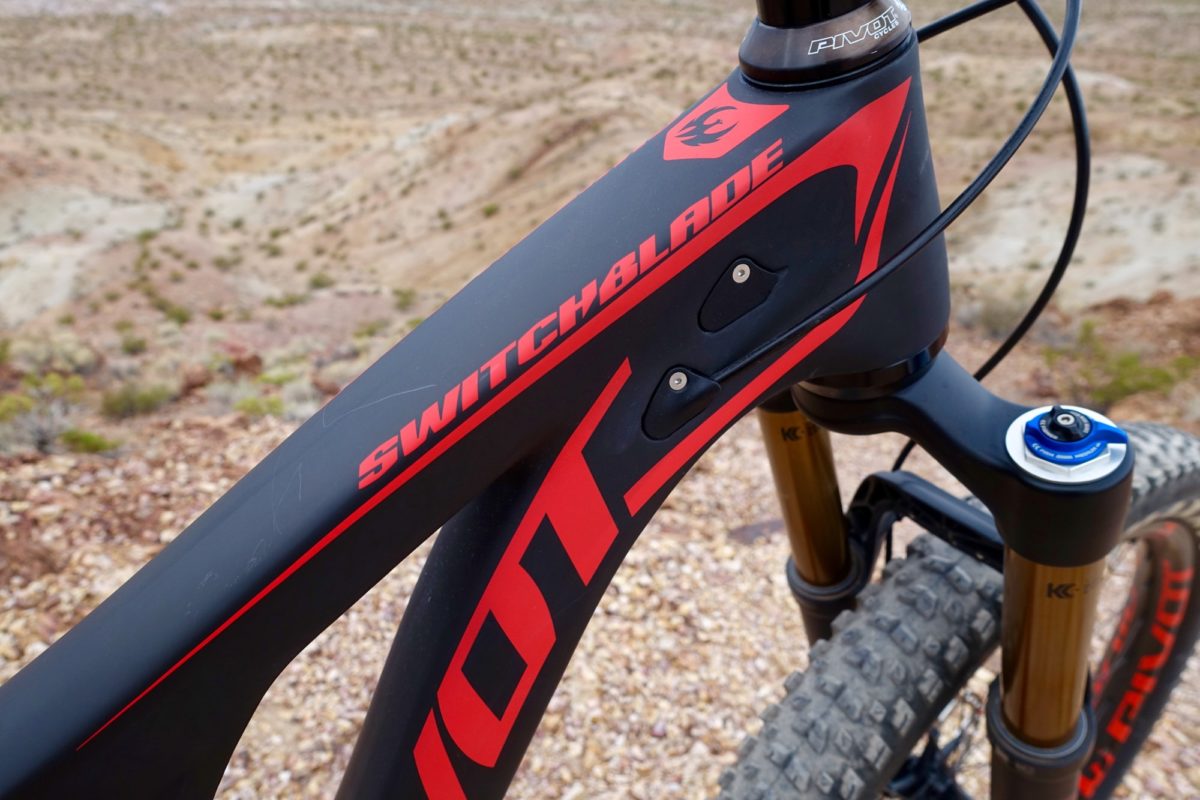 Of course, the Switchblade has a full carbon frame with all of the latest tech, including Pivot’s proprietary rear hub spacing, dubbed “Super Boost.” Basically, Super Boost utilizes existing 157mm DH hub spacing, but Pivot worked with DT Swiss, Industry Nine, and Reynolds to develop specific Super Boost hubs that move the flanges out even further than Boost 148 or standard DH 157 hubs, thereby creating an even stiffer wheel.

If you’re confused on the differences, don’t worry–here’s a handy chart to help clear things up: 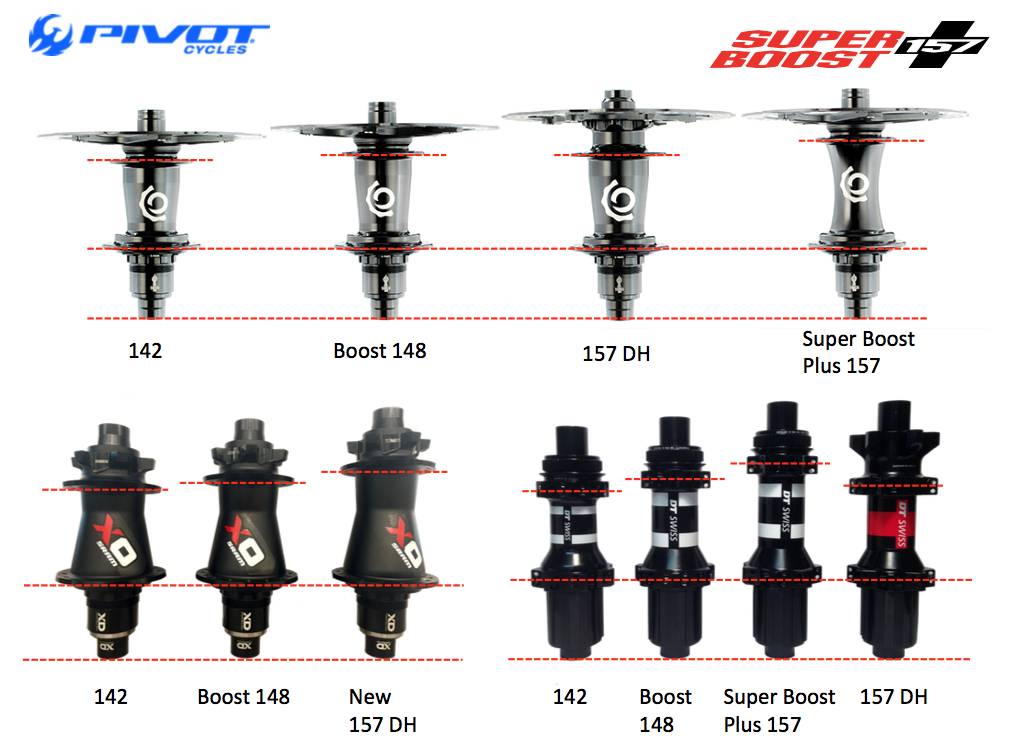 Despite having a really wide rear end with clearance for full 3.25″-wide plus tires, the chainstays on the Switchblade are astonishingly short–16.85″, or 428mm. Not only that, the Switchblade is also compatible with a front derailleur and 2x drivetrains. Keep reading for more on why this rear end is so exceptional, and why some other bike companies are lying to us.

From the initial climb right out of the demo center, I found the Switchblade to fly up the hill in spite of the plus tires and long travel fork. Pivot is known for making bikes that pedal superbly, even in their long-travel models, and the Switchblade is no exception to that rule. Pedaling hard up the dirt road and accelerating up and over rocky ledges were both a dream. To truly test the pedaling platform, I left the suspension full-open, and I still found it to be spry and snappy. For an even firmer pedaling platform, the Fox shock offers a full lockout.

Turning back down the mountain, the 135mm of rear travel and 150mm of front suspension were more than ample forgiveness for the rocky, ledgy terrain found in Bootleg Canyon. Add in the plus wheels, and this trail bike offers more than enough cush and forgiveness to not only serve as an everyday rider, but pull double duty as an enduro race bike on certain courses. We’re seeing many enduro racers forgoing super long travel enduro rigs in favor of shorter travel bikes that are lighter and pedal faster, and the Switchblade fits that model perfectly.

In short, while I only got a 6-mile ride in on the Switchblade, I can already tell this is a bike that I could easily ride all day, every day. It pedals much more capably than my own personal enduro bike, and yet sacrifices little in descending prowess. I may be in love.

When I arrived back at the tent, Carla McCord, Pivot’s chief marketing guru, asked “could you feel the Super Boost?” And I responded that honestly, after a mere 6-mile ride with no A/B comparison, there’s no way I could tell exactly what the Super Boost was or was not doing for the bike. I could feel that the bike was very laterally stiff in the rear end, but there are so many variables that play into that feeling, including the stiff Reynolds carbon wheels, the frame design, suspension linkage, tires, tire pressure, and yes, the design of the rear hub. However, I did notice other interesting attributes about the design of the Switchblade’s rear end from my short ride… 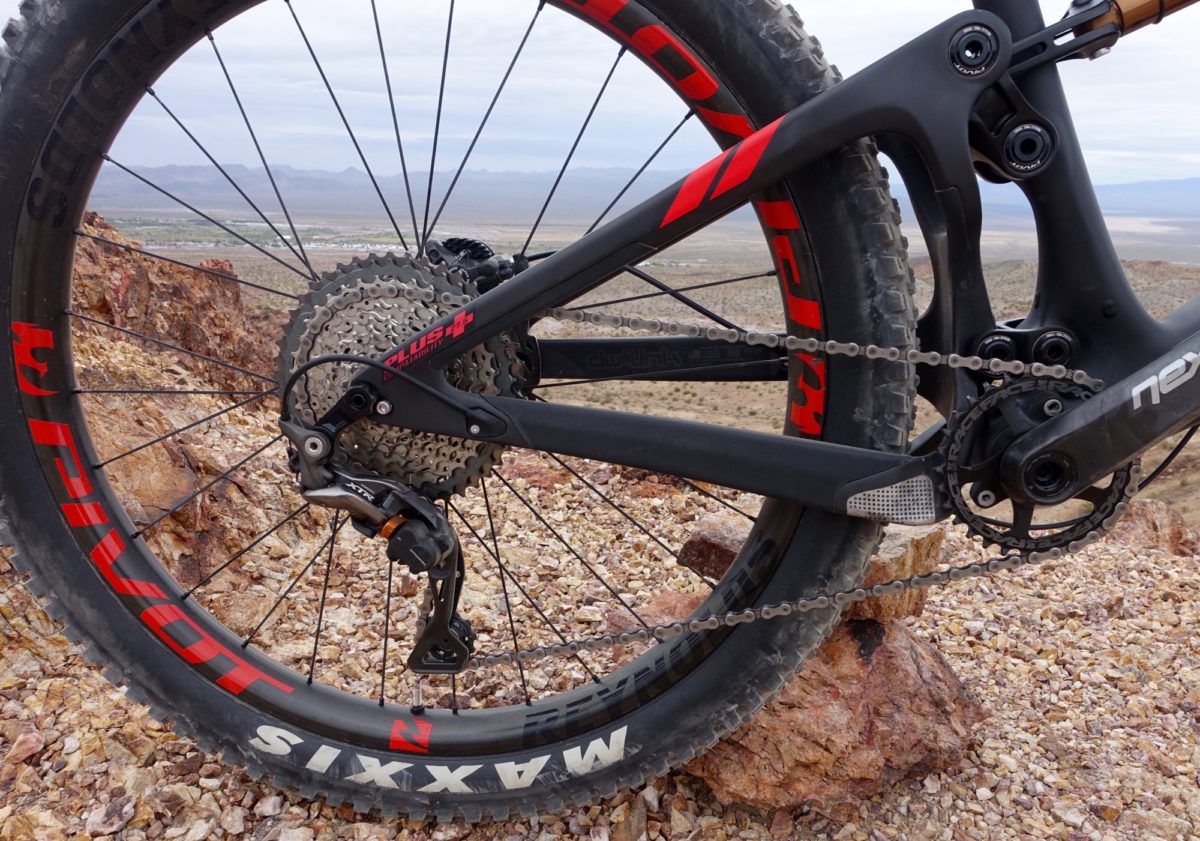 As you can tell, I had a great time aboard the Switchblade! And best of all? I had zero calf-bang on the frame.

Over the years, I’ve heard justifications from a variety of brands about the compromises that they supposedly “had” to make in order to fit plus-size tires in the frame. Painful banging of the calves on the frame? “Oh, the tire wouldn’t fit without that clearance.”

No 2x compatibility? “Not enough clearance.”

Chainstays too long? “Needed clearance to fit a front derailleur.”

Tire clearance in the stays too tight? “Trying to avoid calf-bang.” 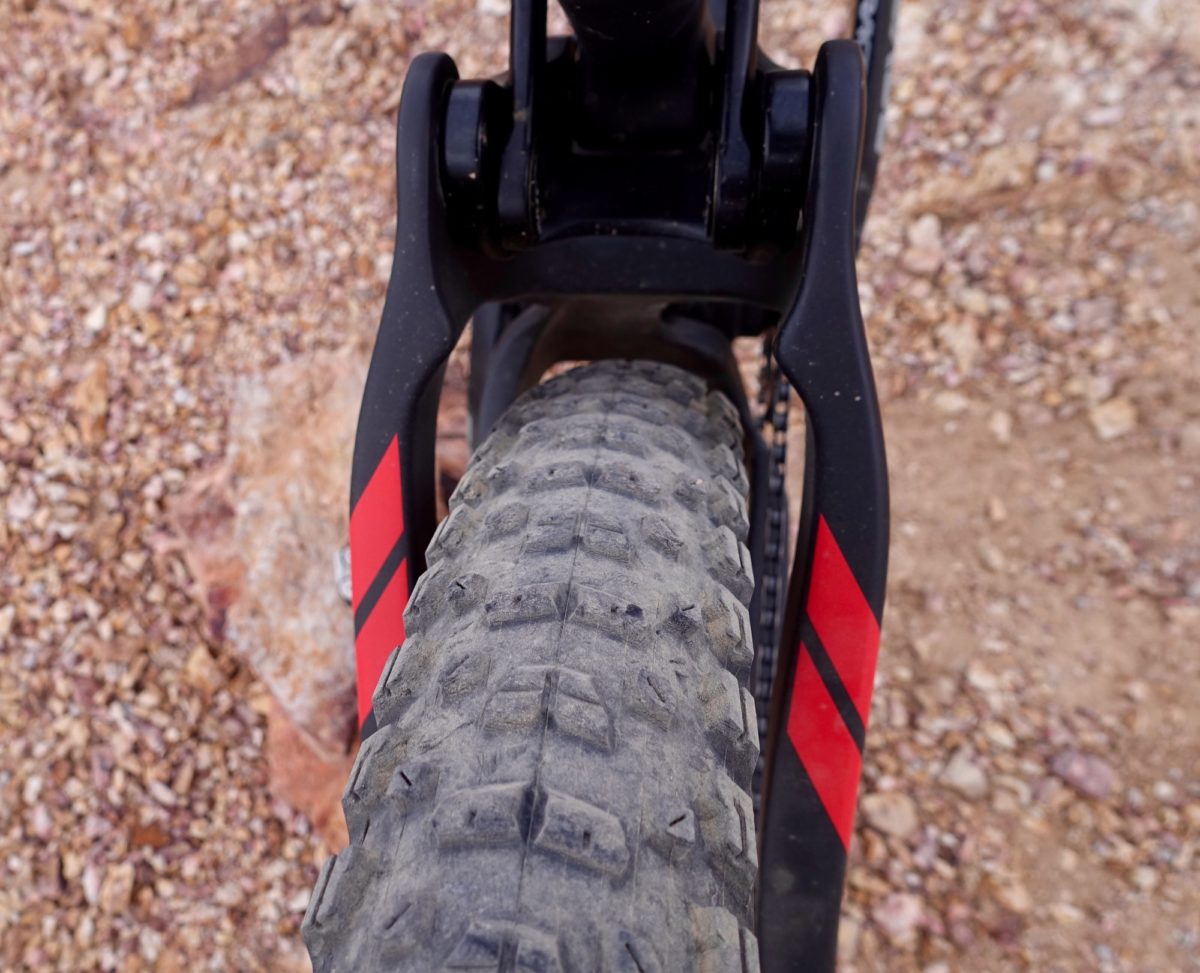 Basically, every brand has a line of BS for why they had to make some compromise to provide a different attractive feature. But you know what? Pivot has successfully fit everything they needed into the rear end of this bike, without making any compromises.

There’s zero calf bang. The chainstays are short, even compared to some hardtails. The rear end offers 135mm of suspension travel. The stays can clear tires up to 3.25″ wide. And the bike can even run a front derailleur–one of the most common features sacrificed for plus tire, and even 29er, clearance

So what’s the tradeoff? Pivot sacrifices 3mm of Q Factor width (meaning it’s 3mm wider) compared to other comparable models in their line. But you know what? Again, their Q factor is still narrower than many other brands.

In short, the fact that Pivot accomplished so much with the rear end of this 27.5+ mountain bike with essentially zero sacrifices means that every other brand that’s said “it can’t be done,” or “this is a necessary sacrifice” is full of shit.

While I only got out for a short test ride aboard the Switchblade, this brief test was an eye-opening experience. After diving deep down the rabbit hole of geometry specs and bike design, it’s clear that Pivot has created a rare beast of a mountain bike that solves many common issues with the 27.5+ wheel size without making any sacrifices. And on top of that, this bike has it where it counts: it just rides friggin’ awesome!

Kudos to Pivot for meeting so many competing design goals. I would say the rear spacing is a compromise for the rider though. Their current rear wheel (even if they just bought some shiny new Boost jammers) is not going to work on this bike.

Also, going from 29 to 27+ is a little more involved. Pivot recommends using a taller (17mm) lower headset cup when running the plus wheels to keep the BB from getting too low. You could always just leave the cup on at all times to make it easy to swap, but the BB height with 29″ wheels would be on the high side. Not necessarily a bad thing though.

Aaron, you make great points. But unless they’ve already purchased some Boost-spaced hoops, almost any bike these days won’t be compatible with what wheels the rider previously owned. However, Pivot noted that standard 157 DH hubs are compatible with their rear end, but you just won’t get the stiffness benefits of the Super Boost-specific hub with the wider flanges. So in theory, some intrepid home mechanic who fancies a little wheel building could lace a set of DH hubs to a set of 29er rims and voila! Switchblade-compatible wheels from existing parts.

Good points on the difficulty to switch back and forth, I definitely didn’t address that above.

I just want the bike industry to pick a hub standard and stick with it.

As for bikes not being able to run 2x, I’m not really concerned. Having the bailout gear for climbing after being in the saddle all day was nice, but a 30T chainring worked pretty well with a 42T rear cog. Now that they have the dinner-plate option (50T), having a front derailleur is even less of a necessity, IMO.

The only problem at the moment with not having the front derailleur option is that the “dinner-plate option” you mention is not affordable to many yet. But then again, for the same people neither is a $8500 mountain bike affordable. =) Hopefully all these great developments will “trickle down” in time.

I just wish they would build a XXL frame for me.

Yes, it seems frame size is a real issue for some. I definitely feel for bigger riders (and small gals) both of who are really unrepresented in the market. As you probably know, there has been a little movement by companies to make more XS. Maybe as the MTB movement in the country continues to grow, bike makers will make more XXLs.

TREK actually is not making a 23″ carbon fiber frame this year. SANTA CRUZ is the only manufacturer that I can find with a XXL model (only one).

My husband and I rode this bike out at Bootleg as well (not even knowing a thing about it, just curious to try out any 27.5+) and fell in love. But $8500 x 2? Notsomuch. We should’ve never thrown a leg over them. We’re ruined!!

Trying out a Mach 5.7 (which was WAY out of my budget) at a demo in PHX ruined me too, but I found a virtually unused full-XT build for less than half the new price, and jumped on that deal. One of my smoothest moves……

This bike is on a short list of bikes I’m considering. I’m 5’11” and the large frame fit like a glove. Very solid bike. For the people that $8500 is too much for their budget, which includes myself, the Pro XT/XTR build goes for around $6300. It’s still a heck of a lot but you get a carbon frame and Carbon wheels and all the components are top notch. The other bikes that are contenders are the Ibis Ripley 29 LS and the Trek Fuel EX 9.8.