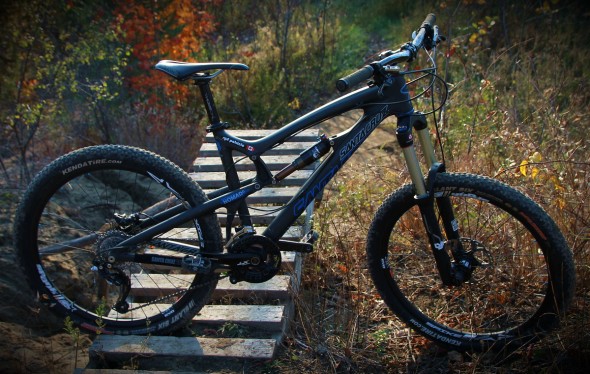 A while back I managed to get myself a beautiful new Santa Cruz Nomad Carbon. This time ’round I opted to pick up a whole bike and bypass the build-up headache. I chose that simply because the SPX build was pretty good right out of the box. With a full Dyna-sys 3×10 Shimano XT group, and decent accessories, I felt it was worth the money.

Since I don’t like to leave anything alone, after a few miles I started to figure out what I wanted to change. Some of the very first things I prefer to change are the contact points: saddle, bars, tires, and wheels are all on the list of possible changes. It just so happened that while chatting with Mike at Spank, he suggested that I run the Subrosa bar and the new Spank Spike Race 28 EVO rims.

The Subrosa bar, like the previous Spike bar I reviewed, uses the same Dual  XGT CNC technology for the bends in the bar. This allows for precise CNC bending and maintains the correct wall thickness throughout the bend process. 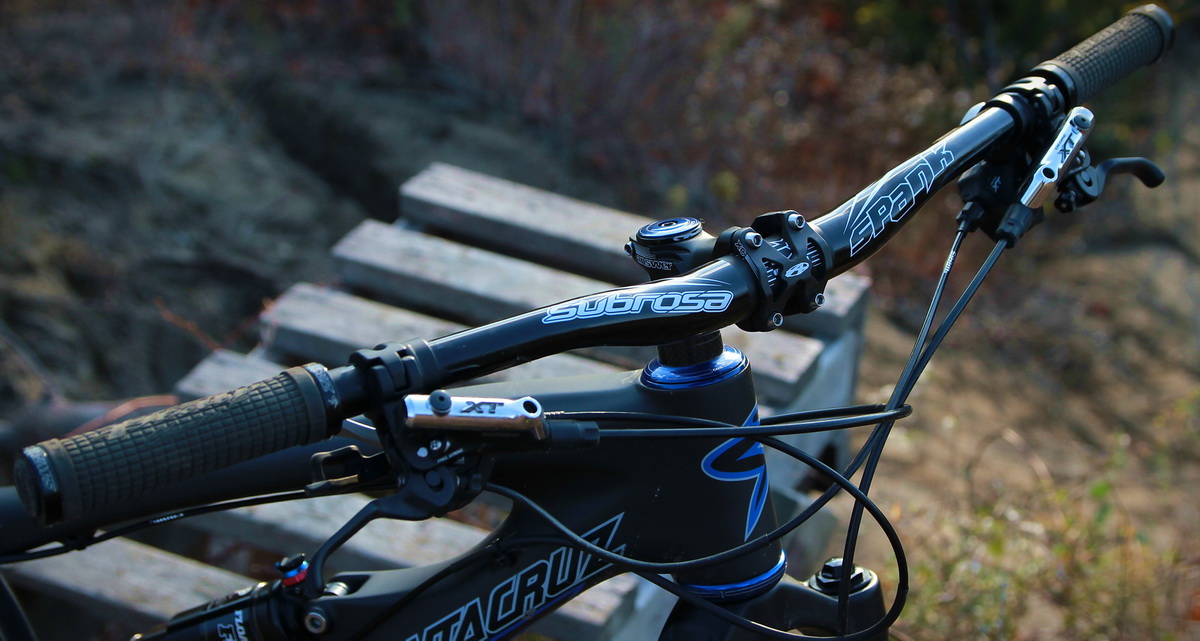 The bar was an easy install. I also swapped the factory stem to a slightly shorter one to accommodate the Subrosa 747. The 747mm width is just about perfect for me, a significant upgrade from the 711mm of the Easton Haven, which just didn’t cut it for this bike. The bend on the Subrosa is 4° up and 8° back. This sets my hands with a very slight turn out on my wrists, with an overall comfortable feel. I tend to match the bar on my Nomad to that of my V10, with the bars rolled back a bit more than usual. Other than that, the controls are pretty much in line with my natural wrist position.

The new Spike Race 28’s come in at 500 grams per rim; these are designed for serious DH but at Enduro weights. All that is possible thanks to a partnership with Fratelli Industries and their state-of-the-art 1000 square meter facility. Rims and spokes are designed in-house and optimized using FEA optimization techniques. The next closest rim I know of that is in the same class and width is a whole 100+ grams heavier. Needless to say, that is a huge difference in weight! Holding one of these wheels in your hands, you can tell this is a sturdy rim. The OohBah and Bead Nip technologies also help with strength and overall stiffness of the wheel.

Just in case you’re wondering, the stock Nomad Carbon had WTB Frequency 23’s on it. I personally found them a to be a bit too flexy, so the change was needed. Delacing the DT Swiss 350 hubs and lacing up the new rims did take a bit of time (especially after I decided to change up the colors on the spoke nipples not once, but twice). Using DT-Swiss spokes and alloy nipples, the rims laced up easily enough, applying 85kgf (average) and truing them to within 0.2mm. After installing a set of Kenda Slant 6’s, also on the review schedule, I was off! 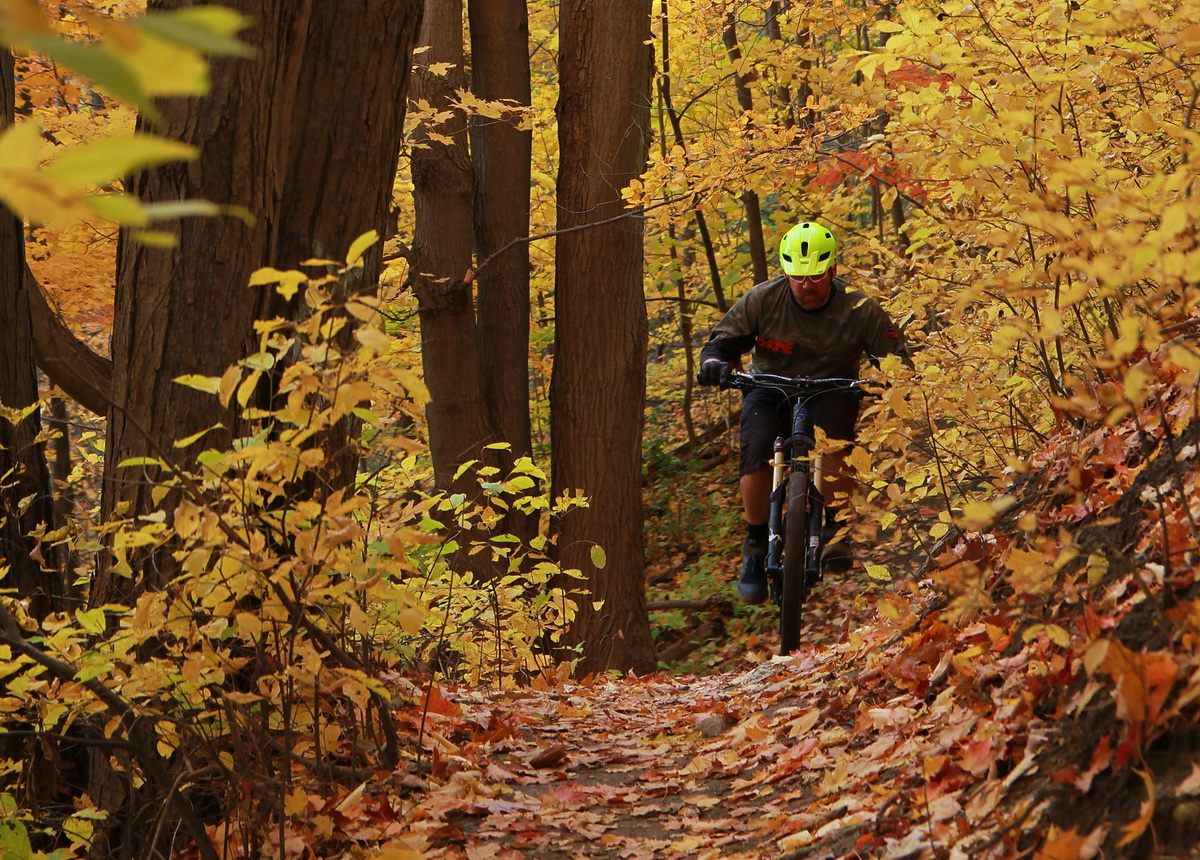 When I purchased the Nomad, I intended it to be my do-it-all ride, so I could just grab knee pads, gloves, and helmet and just go. Whatever was in the way was just something to play on. So the wheels had to survive. In fact, I have two sets: one is on the Nomad C now, and once my Shimano Zee Group arrives the other set will be installed on my V10C.

Once I rode the wheels a bit and managed to get the tension right on the spokes, I found that the Spike 28 rims live up to the hype. Yes, they are both light and tough! I plowed them through rock gardens at Bent Rim trail near Kelso, and beat them around on Dagmar’s various terrain. Nothing phased them! I was very impressed by their strength. 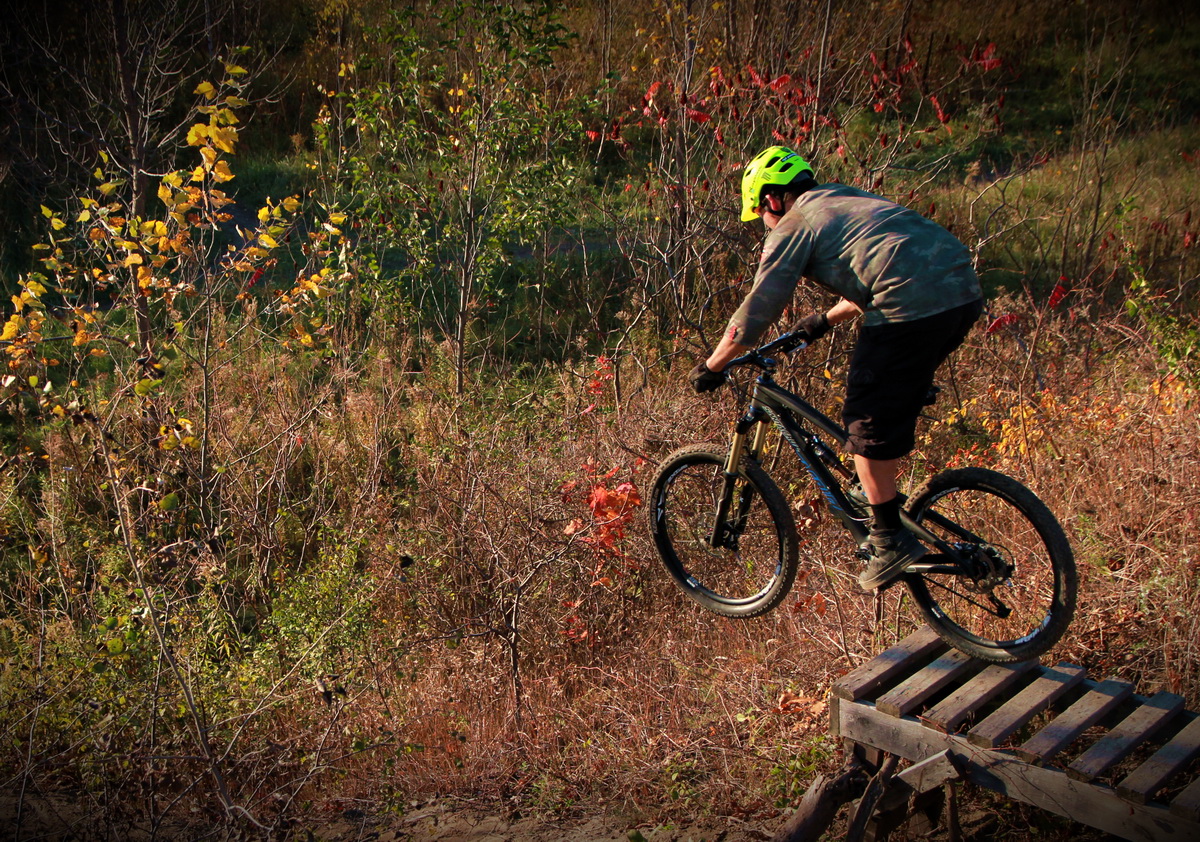 Huckin’ was just as fun. Even when I did eat it, I had no issues with the Spike Race 28’s. Talk about dead straight! I guess a combination of the rim profile, triple tensioning of  spokes, and the lack of eyelets really keeps things on the straight and (not so) narrow. If you’re looking for a fast rolling wheel, again, the essential thing there is a stiff, fairly light weight. The Spanks, built up on DT Swiss hubs with Stan’s rim strips, came in at 1850 grams. Not the lightest build, I know, but one less thing to worry about when on the trails. Now if I could only afford a ticket to Italy and hit the Dolomites to really give ‘er!

The Subrosa bars fit and feel great. For an alloy bar, I was impressed at the balance between a stiff feel and forgiveness. The compromise was right there–when I hit the washboard sections of trails, there was just enough dampening in the bar that it didn’t numb my hands (with gloves on). On the bigger hits, again, I was appreciative of the give the bars had. Now on the technical trails, the 747mm width was close at times. I guess the cut trails up around here are… ummm… a challenge. Yeah let’s call it that. With a bar that wide, there are sections where, at times, you may clip a branch or two. But it’s a fair trade-off for laser-like control.

So if you’re looking for a set of lightweight, huck-worthy gear, check out Spank. The Subrosa bar and Spike Race 28’s are definitely a plus for anyone’s do-it-all ride.

The Subrosa 747 bar retails for $79  and the rims are about $80 per hoop. Just remember, you’re going to need spokes and nipples when you’re thinking of upgrading rims.

A big thanks to Mike at Spank for sending down the gear for review!