Several years ago carbon fiber scared most mountain bikers, who tended to think carbon was just for road bikes and too light and fragile for beating on it in the woods.  However, advances in design and manufacturing over the last several years have resulted in carbon components that are stronger, stiffer, and more durable than their metal counterparts, and usually lighter, too.  Now, even World Cup downhill races are won on carbon bikes rolling on carbon rims.

The only thing keeping most riders off carbon is the price–you gotta pay to play.  But NOX Composites from Knoxville, TN is dropping the price of entry with their new rims.  Founded by two engineers and mountain bike fanatics, NOX was officially launched earlier this year with a carbon 29er rim, and a carbon 650B rim will be available shortly.

I first heard of NOX when a fellow rider mentioned them on the Southern Wheelworks Facebook Page.  After doing a little digging on their website, and liking what I saw, I got in touch to set up a dealer account with them, and they were kind enough to send me a pair of the XCR-29 rims to build up and review.

The XCR-29er rims have a claimed weight of 385 grams (mine were 383g and 385g–right on target), which is light, but not super light–Stan’s Crest 29er alloy rims are the same weight.  The NOX rims are much stiffer, however, and would be suitable for much heavier riders than the Crest rims.  Even without riding them, I could tell a difference–an unbuilt Crest rim can be easily bent by hand, but these NOX rims don’t budge a bit.

The NOX rims feature a nice, wide internal width of 23mm, which will help open the tire up for better cornering.  They use an asymmetrical design, which offsets the spoke holes away from the center of the rim.  This improves the spoke bracing angle on the rear drive side and front non-drive side, and increases the spoke tension on the lower tension side of the wheel.  With the rear hub I used, a symmetrical rim would result in a non-driveside spoke tension of 65% of the driveside’s tension.  Thanks to the offset in the NOX rims, the non-driveside tension goes up to 78% of the driveside, and the bracing angle on the drive side is improved.  Higher tension means the wheel has a higher load capacity–it can carry more weight.  The asymmetrical design will often (depending on the hubs) result in using the same spoke length on each side of the wheel.

They come tubeless ready, as all modern MTB rims should.

The rims are designed in Tennessee, but manufactured overseas: they are not generic Taiwanese rims that have been rebranded and had the price marked up. Instead, the XCR-29s are NOX’s own design, and NOX owns the molds.

Unidirectional carbon is used for strength, and some 3k weave is used in the tire bed area and up onto the sidewalls, which is said to improve impact resistance and prevent cracking.

The XCR-29 rims sell for an MSRP of $450 per rim, which is significantly more expensive than an alloy rim such as a Stan’s NoTubes, which are about $90/rim.  But compared to other carbon options, they fit a gap very nicely between the generic Taiwanese rims and the more boutique name brands.  Taiwanese rims can be had for about $200 each. Stepping up to carbon Reynolds rims (which are also made overseas), the price jumps to about $700 per rim, and the made-in-the-USA ENVE rims are over $900 each.  The NOX rim price is higher than the generic rims, but they’re an original, unique design, and still cost less than either Reynolds or ENVE. Since they’re an American company, you can call them up and ask questions, or chat with a real person if you ever have a warranty issue.

I chose to build my set of rims up to a pair of Hope Pro 2 Evo hubs, in blingy gold.  The Hope hubs are made in the UK and are reliable, reasonably light, have spare parts available if needed, come in several colors, and are extremely adaptable.  Both front and rear axles can be converted to any standard, even thru-bolt, and the rear hub has an XD driver available if I ever want to use one of SRAM’s 1×11 drivetrains.

The axle convertibility was especially important to me since I have two bikes, one with a thru-axle suspension fork, and the other with a QR rigid fork.  Plus, who knows what sort of test bike I may end up riding in the future.  The Pro 2 Evo hubs use a swappable end cap system, so switching back and forth is a tool-free job that takes seconds. The end caps aren’t expensive, either.

As a side note, the Hope rear hub is very loud, which I like… but you might not.

Since the rims are so stiff, they could be built with lighter-gauge spokes than an alloy rim of similar weight.  I used DT Swiss Revolution spokes, which knock 100g off the wheelset when compared to the Competition spokes used on most of the MTB wheels I build.  Light weight bladed spokes such as the DT Swiss Aerolite or Sapim CX-Ray will work too, but offer no real performance or reliability advantage for this application, and they cost more.  Some people like the look of the bladed spokes; I don’t really care one way or the other, so I used the less expensive option.

Alloy nipples, in gold to match the hubs, round out the build, and the complete set weighs in at 1,582g and would set you back less than $1,400.  Let that sink in: hand-built wheels, with wide, light, stiff carbon rims laced to a nice set of hubs, with several color choices, for less than the price of two rims from some brands.

These will be used primarily on my rigid single speed, so I mounted a big 2.4in wide Maxxis Ardent tire on the front and a light, fast Maxxis Ikon on the rear.  Both tires went on without the need of levers.  The Ardent aired right up with a floor pump, but the Ikon took a bit more work.  I was able to get it inflated with a floor pump by removing the valve core to allow more air flow.  Both tires snapped into place with a reassuring “pop”. 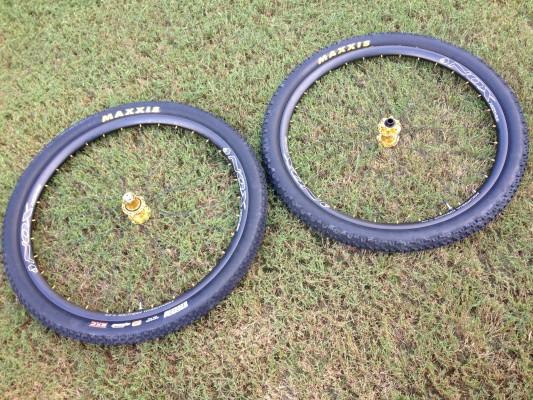 My American Classic/NoTubes Crest wheelset is about 30g lighter, and much less expensive.  But the better spoke bracing angle of the Hope hubs combined with the stiffness of the NOX Composites rims should result in a much stiffer set of wheels, and with lighter spokes I doubt I’ll feel the additional weight, which is all in the hubs.

Time will tell, and with several races on the calendar in the next two months, these wheels will get a proper thrashing very soon!  Stay tuned to the Singletracks blog for the final review later this fall.

Thanks to NOX Composites for providing the XCR-29 rims for review.