Cross-country mountain bike racing has undergone a noticeable transformation lately, adding challenging technical features that would’ve made DH riders tap the brakes just a few years ago. Hot on the heels of the announcement of Giant’s updated Anthem 29 XC race bike, Specialized is giving the Epic FSR the same longer, slacker treatment to its venerable full-suspension XC race bike. Not only has the Epic FSR geometry been tweaked, the kinematics have been revamped to use a (modified) single-pivot design, there’s an updated Brain 2.0 shock, and the frame is now 525g (1.16lbs.) lighter. This news follows an update of the Epic hardtail back in November. 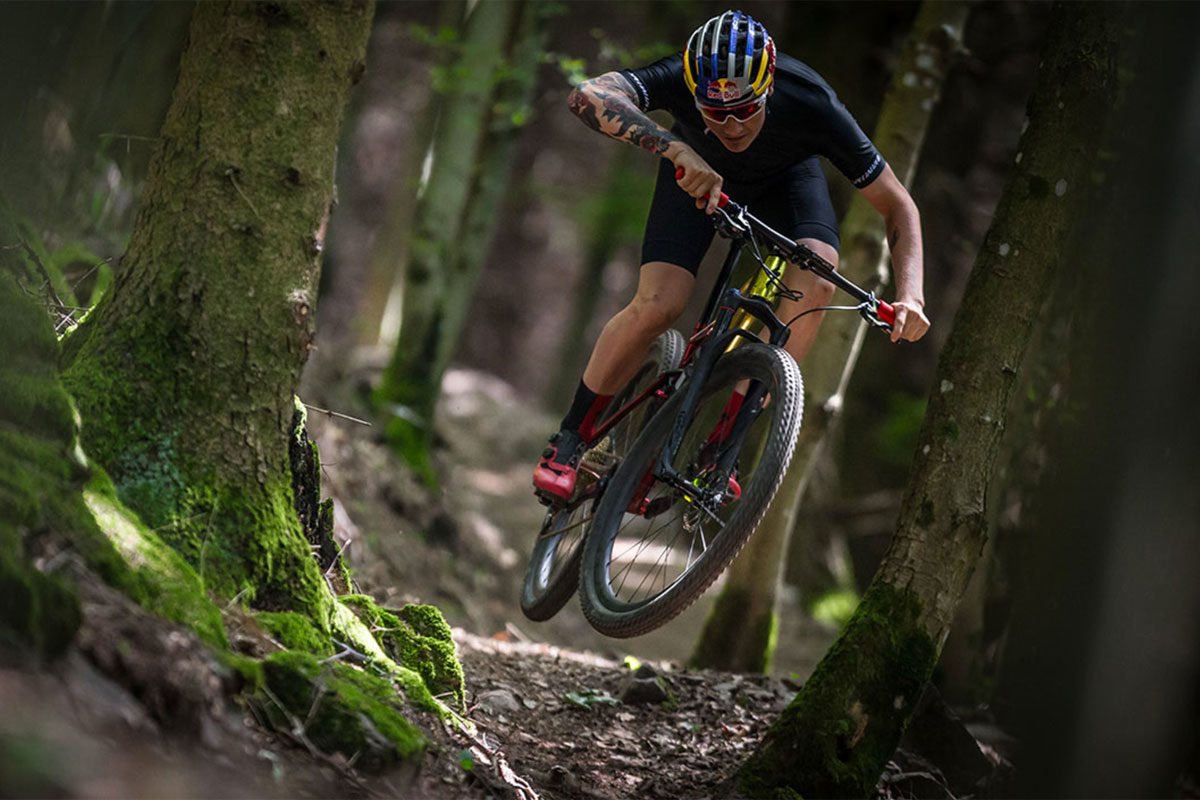 The new Specialized Epic FSR sports a 69.5° head tube angle, a full 1.5° slacker than previous versions of the Epic FSR. For those keeping track, the new head tube angle is 0.3° more slack than the recently announced Epic hardtail. Of course there are tradeoffs with a reduced head tube angle–namely, climbing performance and stability generally suffer with a more slack head tube angle. So, Specialized compensated a bit by reducing the bike’s fork rake offset by 4mm, from 46mm to 42mm .

The new Epic FSR increases reach by 10mm across all sizes. The bottom bracket height is mostly the same in the updated models, though curiously it has been raised by 0.6mm. Chainstays also stayed roughly the same length, shrinking by just 1mm overall. 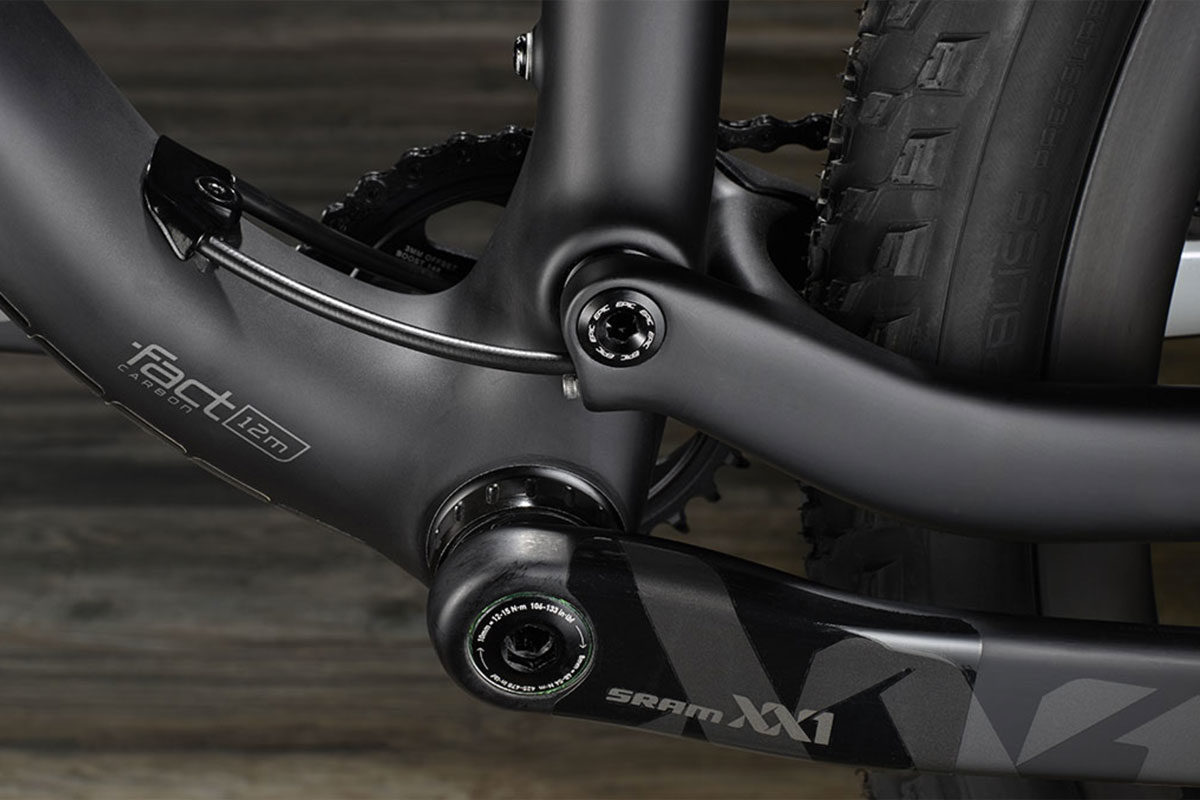 Perhaps one of the biggest changes to the Epic FSR is the use of a single pivot design. This change allowed Specialized to simplify the rear end, saving 240g in that part of the frame alone. Still, Specialized remains committed to the FSR system due to its unique ride characteristics. So, the company designed “flex zones” into both the seat and chain stays to ensure the bike still rides like an FSR. 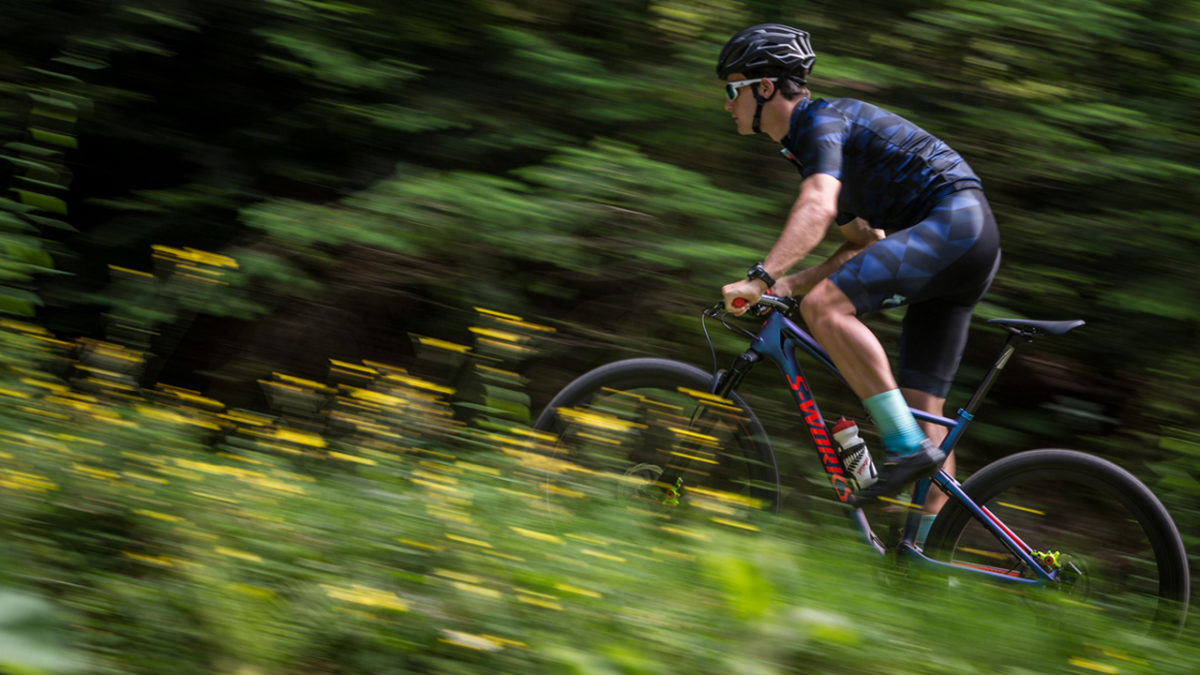 By going single pivot, the new Epic FSR promises to be even more stiff than it’s predecessor, which translates into efficiency out on the race course. However, the marketing material for the Epic FSR makes it clear that Specialized is not giving up on FSR for the rest of their full-suspension line. 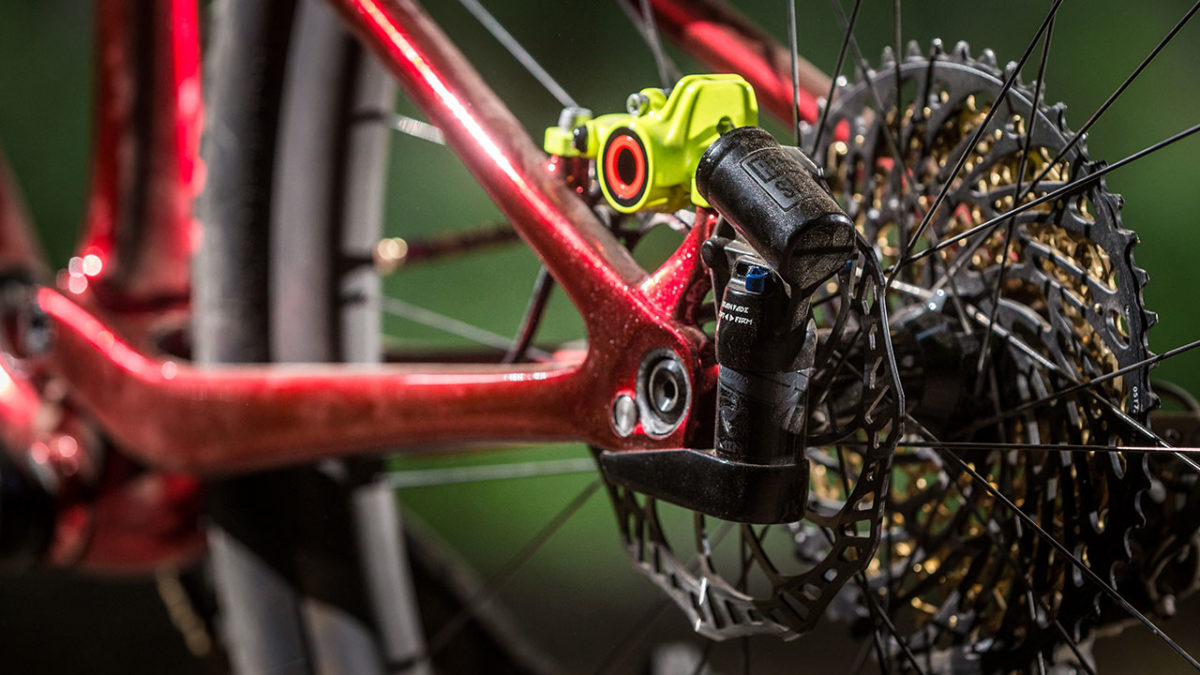 Specialized bills the Brain as a suspension system that is able to differentiate between pedaling and trail inputs, which XC riders will particularly appreciate. The Brain 2.0 system moves the mechanism closer to the rear axle for improved performance. The new design also utilizes improved hose routing for better frame protection, enhanced fluid flow, and an overall cleaner look.

Thanks to the redesigned rear end and improved carbon fiber materials and construction techniques, Specialized dropped up to 525g off some of the frames. That’s more than a pound, on the frame alone; component weights are dropping as well, making this a seriously lightweight race bike. 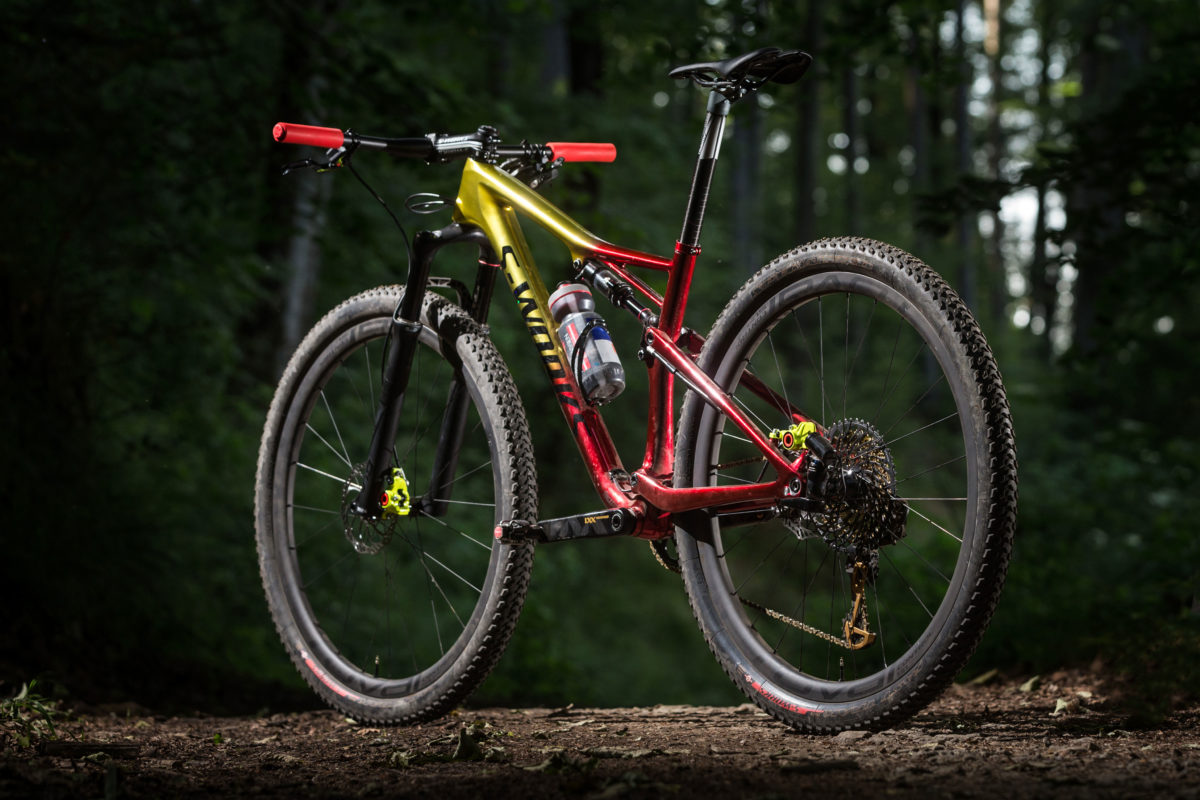 Speaking of components, it’s interesting to note that Specialized is only showing the Rock Shox RS-1 fork on a single S-Works build. Specialized seems to be opting for the Rock Shox SID fork for the high end models instead. The company continues to offer select Di2 models along with SRAM Eagle XX1 at the top end. Because the new frames are designed for 1X drivetrains, even base models like the Comp ship with just a single chainring. 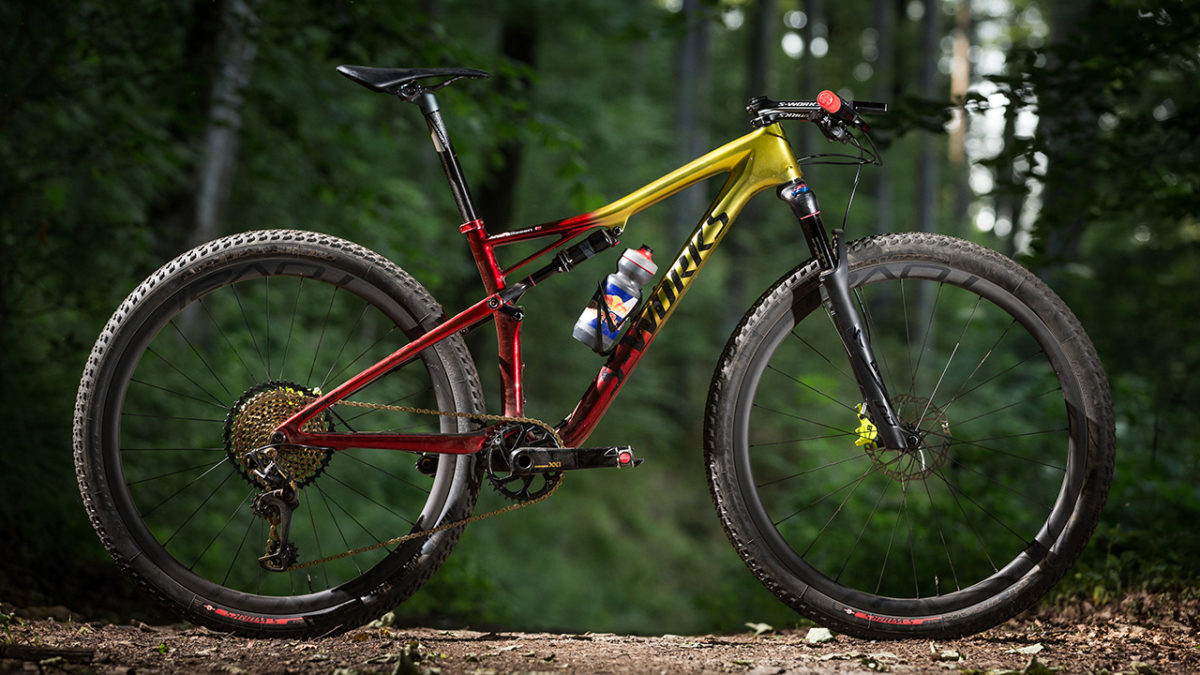 Overall, pricing for the latest models has generally dropped by about $1,000 for the carbon bikes. The top-of-the-line S-Works Di2 Epic FSR retails for $10,500 USD while the Expert model will sell for $5,200. There’s a carbon Comp model available for $4,000 and an aluminum Comp version for $2,800 USD.

Watch the video below to see the new Epic FSR in action.

Is mountain bike frame design repeating its self? After all, Scott just changed their. Trek’s Floater system has gone for the Slash, again, Specialised seem to be going back to a common design. Orange Bikes have not really changed their design for years. Just a thought…

Yes, you are right; suspension designs are repeating. Well placed single pivot is efficient, simple, and reliable. Mountain Cycle used the simplest single pivot design very successfully many years ago. Orange, as you point out, uses a very simple single pivot; which happens to be nearly the same design as Mountain Cycle’s. Foes has always been single pivot (Foes adds a swing-link to actuate the shock, affecting the leverage curve and adding lateral support to the swing-arm). And flex engineered into the stays to approximate the pivot of a Horst link is not new either. Trek simplified the Slash suspension by eliminating the full floater—simple can be good; easier design and analysis, easier fabrication easier maintenance. (Though it was amusing to read Trek’s justification of removing the full-floater from the Slash (optimizes!) while keeping the full-floater on their other optimized bikes.) Scott’s change to the Genius suspension actually went from single pivot to Horst link, increasing suspension complexity; but it simplified the frame structure, allowing a reduction in weight while maintaining strength and stiffness (so they say).

Thanks for the details Drcbrath, I thought I was losing it…!